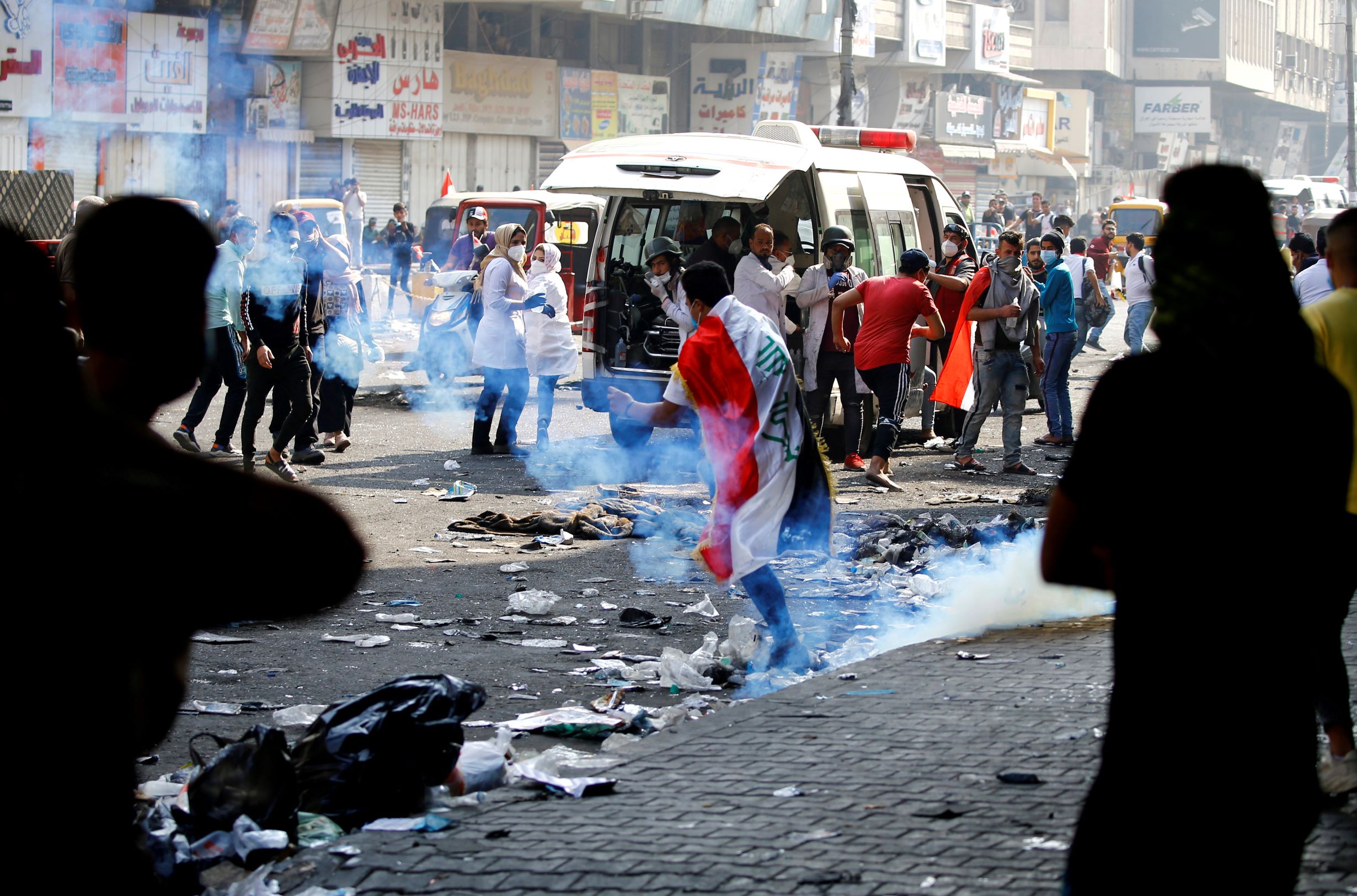 BAGHDAD (Reuters) – Iraq’s ruling parties appear to have rallied behind a strategy, blessed by Iran, to try to survive a mass anti-government uprising by containing protests on the streets of Baghdad while offering a package of political reforms and elections next year.

But the proposed solution involves keeping in power a ruling elite that Iran has cultivated for years – unlikely to placate protesters who have been demanding the entire caste of politicians be swept aside.

Iran has been closely involved in formulating the new strategy, with a number of meetings between political groups and government figures attended by Qassem Soleimani, the general who commands the Quds Force of Iran’s Revolutionary Guards that supervises Tehran’s clients across the Middle East.

Two sources with knowledge of the talks said Soleimani had approved the reform plan, which would keep Prime Minister Adel Abdul Mahdi in power until new elections next year, as it would give Iran time to recalculate how to retain influence.

At least 300 protesters have been killed, most by security forces firing live ammunition into crowds. But the violent response has done little to persuade the protesters to leave the streets.

A senior security official told Reuters new tactics were being rolled out to try to confine the demonstrations to Baghdad’s Tahrir Square, a roadway junction at the foot of a bridge across the Tigris, where demonstrators have camped out for weeks.

“Security forces received new orders on Saturday that protesters must be kept in Tahrir Square,” the security official said. “They’re working quietly now to seal off the square from all directions, and an arrest campaign is expected to follow in a bid to reduce momentum of the protests.”

Meanwhile the authorities will push on with a reform plan to mollify the crowd, with new elections run by a commission intended to be more independent, and parliament restructured to be smaller and more representative of Iraq’s diverse population.

Sources who have attended recent government meetings say the strategy now enjoys the backing not only of the Iran-backed parties that support the government, but also of their main rivals, the faction of Shi’ite cleric Moqtada al-Sadr, who regularly denounces Iran and had called for Abdul Mahdi to quit.

“The anger of protesters at everyone in politics, even religious figures, forced all parties to listen to Iranian advice and work together to keep Prime Minister Adel Abdul Mahdi’s government standing,” said a source close to Sadr.

“Even Sadr is on board,” he said. “He worried that protests he’s not controlling could also threaten his position” among his followers, the source said.

The new reforms include lowering the minimum age of candidates, increasing the number of voting districts and reducing parliament to 222 seats from 329, according to a proposal from Iraq’s President Barham Salih seen by Reuters. Political appointees on Iraq’s Independent High Electoral Commission would be replaced with technocrats and judges.

Parliament will vote on the changes before eventually approving a date for early elections in 2020, two sources close to the talks said, leaving room for potential delays.

Izzat Shahbandar, an independent who has been mediating among senior political figures including Abdul Mahdi and regularly meets with protesters, said a partial cabinet reshuffle was agreed in principle, with the premier staying.

“Everyone has rallied around the prime minister now. He’s their best bet to avoid chaos,” he said.

It remains to be seen whether the promise of reforms can take any of the heat out of the protests. The reforms clearly fall short of protester demands to scrap the entire post-Saddam political system, but parties could present them as evidence that they are serious about moving in the right direction.

Grand Ayatollah Ali al-Sistani, who speaks on politics only in times of crisis and wields enormous influence over public opinion in Shi’ite-majority Iraq, has called for serious reform within a “reasonable time frame”. He has urged protesters not to go home until concrete steps are taken to meet their demands.

As the protesters’ demands have become more specific, some have called for a system with an elected executive president, less beholden to the political factions that have selected all of Iraq’s post-Saddam prime ministers behind closed doors.

Most say they just want the rulers out.

“They choke us so we can’t breathe, so we can’t speak and tell them to go away!” said Ammar, 20, from Baghdad’s Sadr City district, wearing a helmet with a scarf around his face at a medical tent where he was being treated for tear gas exposure.