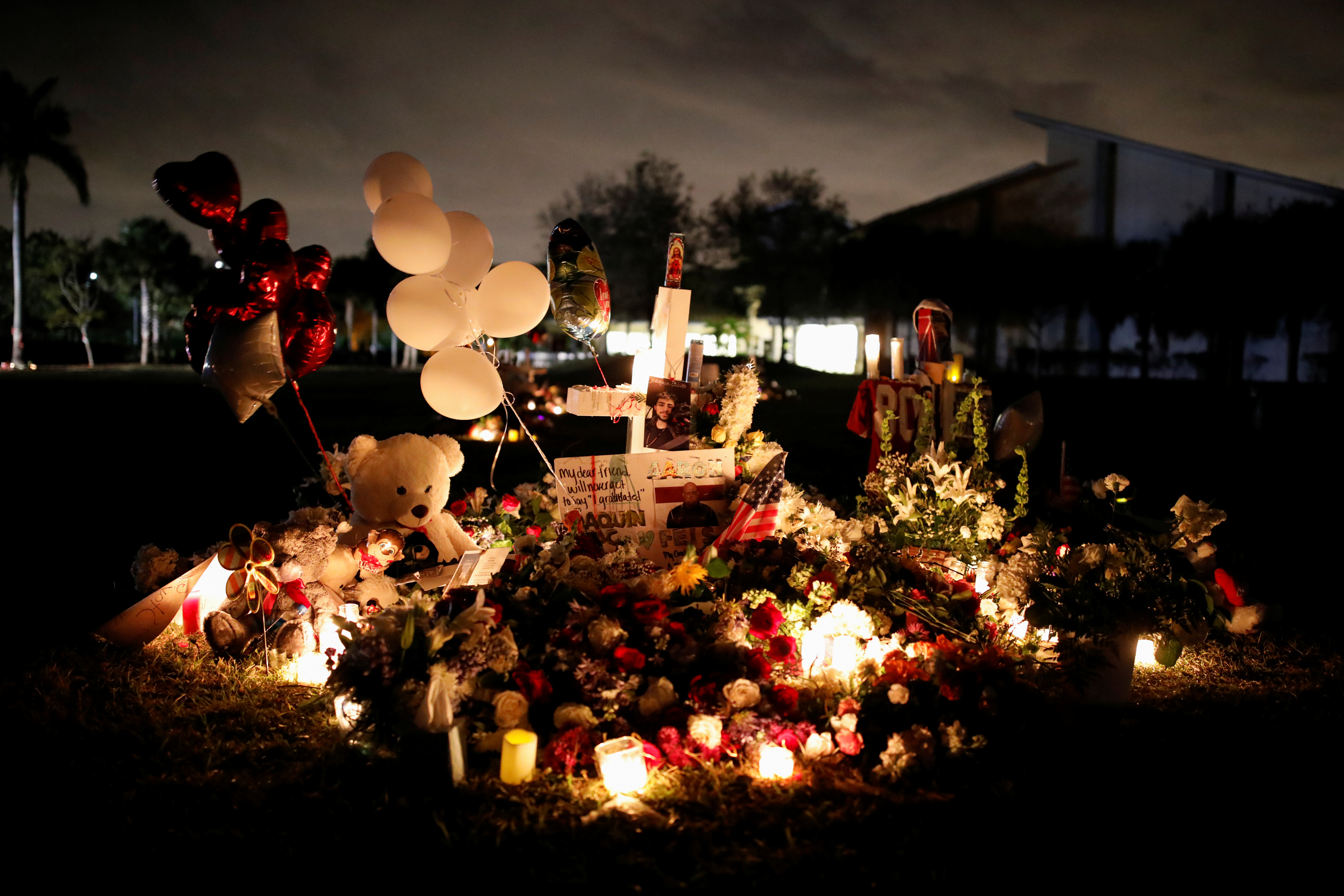 (Reuters) – Arm teachers, spend more on school security and mental health and train police to be more aggressive when responding to school shootings — those are some of the recommendations in a report into the deadliest U.S. high school shooting released Wednesday.

The 485-page report into the Parkland, Florida school massacre, that left 14 students and three adults dead at the hands of a lone gunman in February 2018, will be studied by Florida Governor Rick Scott, Governor-elect Ron DeSantis and a state commission charged with finding ways to prevent another school shooting massacre.

The report, by the state-appointed Marjory Stoneman Douglas High School Public Safety Commission, finds a cascade of errors from law enforcement officers holding back as shots were fired and lax school security that allowed a former student with an AR-style semi-automatic rifle access to the campus. 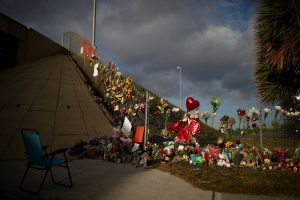 FILE PHOTO: An empty chair is seen in front of flowers and mementoes placed on a fence to commemorate the victims of the mass shooting at Marjory Stoneman Douglas High School, in Parkland, Florida, U.S., February 20, 2018. REUTERS/Carlos Garcia Rawlins

The Parkland shooting has sparked a national debate about school security, gun-rights, and fueled a student-led movement calling for more gun-control, called Never Again MSD, after the school’s initials.

Pinellas County Sheriff Bob Gualtieri, chairman of the school safety commission, told the South Florida Sun Sentinel that there needs to be a sense of urgency in implementing change in school security.

“When you send your kids to school in the morning, there’s an expectation they’re going to come home alive in the afternoon,” Gualtieri told the newspaper.

He also said he strongly supported the idea of arming some gun-trained teachers.

But not everyone on the 16-member commission agreed with all of its findings.

Commission member Lori Alhadeff, whose daughter Alyssa was killed at Stoneman Douglas, told the Sun Sentinel that she opposes the idea of arming teachers.

The report was critical of a perceived slow response from law enforcement officers who waited outside the school buildings while shots were still being fired.

Other recommendations included more funding for mental health services for students, creating safe areas at schools where students can hide from a potential gunman, locking school perimeter gates while school is in session and requiring law enforcement officers to immediately seek out a shooter instead of hanging back.

The report acknowledges that more money is needed to implement the recommendations. 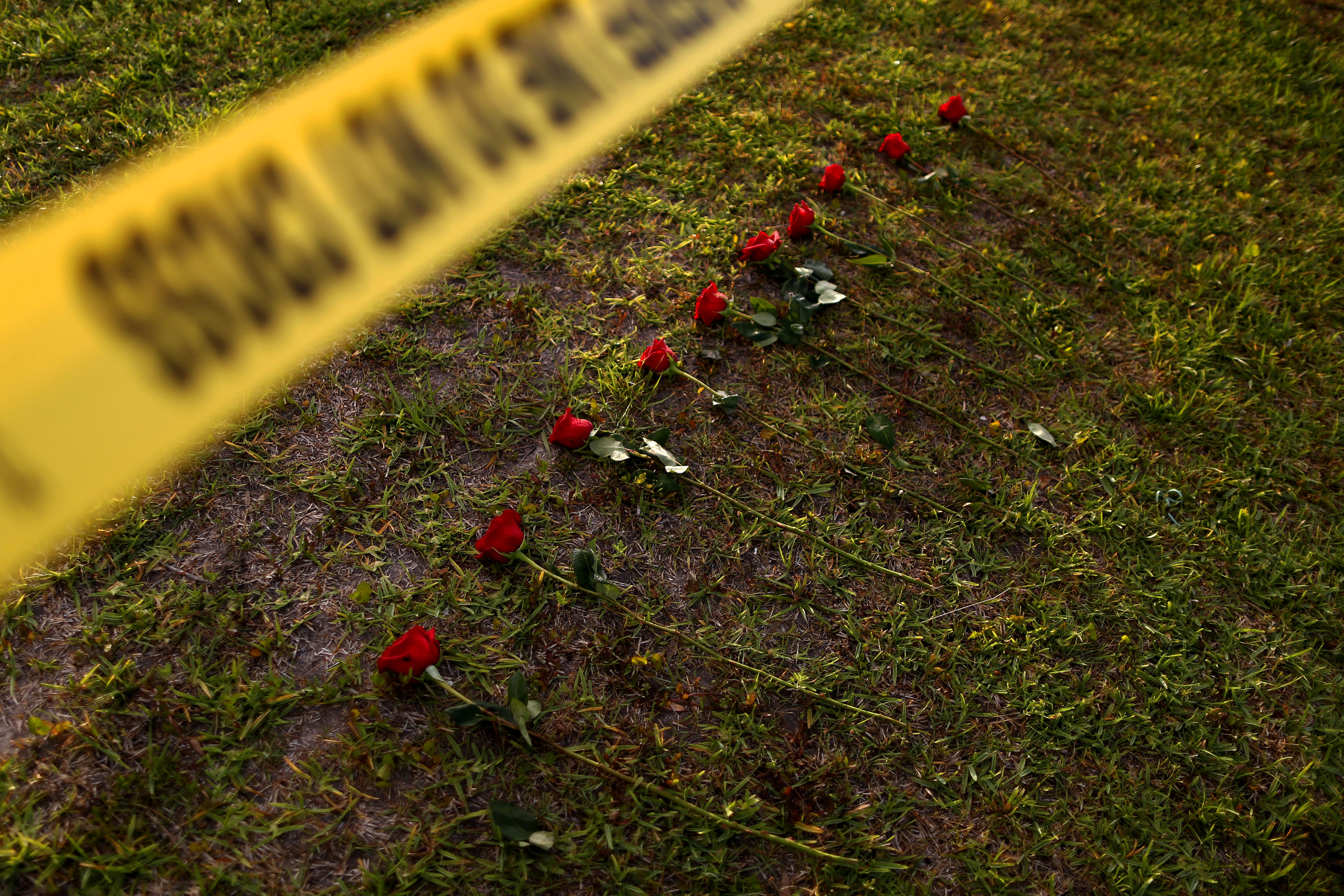 The focus on school security and mental health has emerged since the shooting because Republican Governor Greg Abbott is facing few calls to overhaul gun laws in a state where the majority of the electorate backs gun ownership. The governor’s office said he would hold roundtable discussions from Tuesday to focus on the best options.

Eight students and two teachers were killed when a 17-year-old student opened fire at Santa Fe High School last week in the latest mass shooting at a U.S. school.

Craig Bessent, an assistant superintendent of the Wylie Independent School District in Abilene, said in an interview that he will take part in the roundtable and that he favored more police or security officers and more screening of students as they entered school campuses.

He also supports arming some teachers as “a good first line of defense,” a position that President Donald Trump has advocated.

“There’s not just the one thing you can do that will stop this and be a cure-all,” Bessent said. “There’s not a single answer.”

About two-thirds of Texas Republicans believe if more people carried guns, the state would be safer, according to a statewide survey in late 2017 from the University of Texas and Texas Tribune.

The shooting rampage in Florida sparked a gun control campaign by students and parents that has piled on pressure nationwide for lawmakers to enact gun control legislation.

“Texas Republicans look at this tragedy and they do not see the gun as the problem,” said Mark Jones, a political science professor at Rice University in Houston. “They see the person as the problem and security as the second problem.”

One of the state’s most prominent Republican leaders, Lieutenant Governor Dan Patrick, said he wanted to limit entrances to schools and stagger class starting times to allow for searches. He acknowledged that such airport-style screening would carry a high cost for the thousands of school districts in the state.

The Republican-controlled legislature is out of session until January 2019, making it nearly impossible for the state to implement and fund any major changes that come out of this week’s three roundtable discussions.

“The roundtables are more political theater than anything else,” Jones said.

The governor has said he sees the roundtables as an essential step in coming up with a consensus approach to enhance school safety. He did not respond to a request for comment.

Political analysts said if Abbott wanted to implement changes already floated, such as adding more metal detectors in schools and allowing for court orders to remove firearms from a person who presents a danger, he would call for a special legislative session. Abbott has given no indication that he would do so.

Texas has 5.4 million students enrolled in its public schools and any changes it made statewide would be costly.

One program being run out of Texas Tech University in Lubbock to screen students who could harm themselves or others has Abbott’s attention. He said after the shooting that he wanted to use it across the state.

The program trains people, using FBI threat-assessment criteria, to go to schools and screen students, according to Billy Philips, an epidemiologist and director of the Office of Rural Health at the Texas Tech University Health Sciences Center.

About 42,000 students have been screened through the program, according to data provided by Texas Tech. About 1 percent of them were referred to licensed counselors.

“Roughly about a third of those that were triaged were for suicidal intention, and they’re mostly female; females act in, males act out,” Phillips said.

Before the shooting at Santa Fe High School, Texas Democrats had filed about 15 bills related to gun violence, almost all of which died when the legislative session ended last year. They included measures to buy back guns, improve gun safety education and create a lethal violence protective order to stop a potentially dangerous person from buying or possessing a firearm. 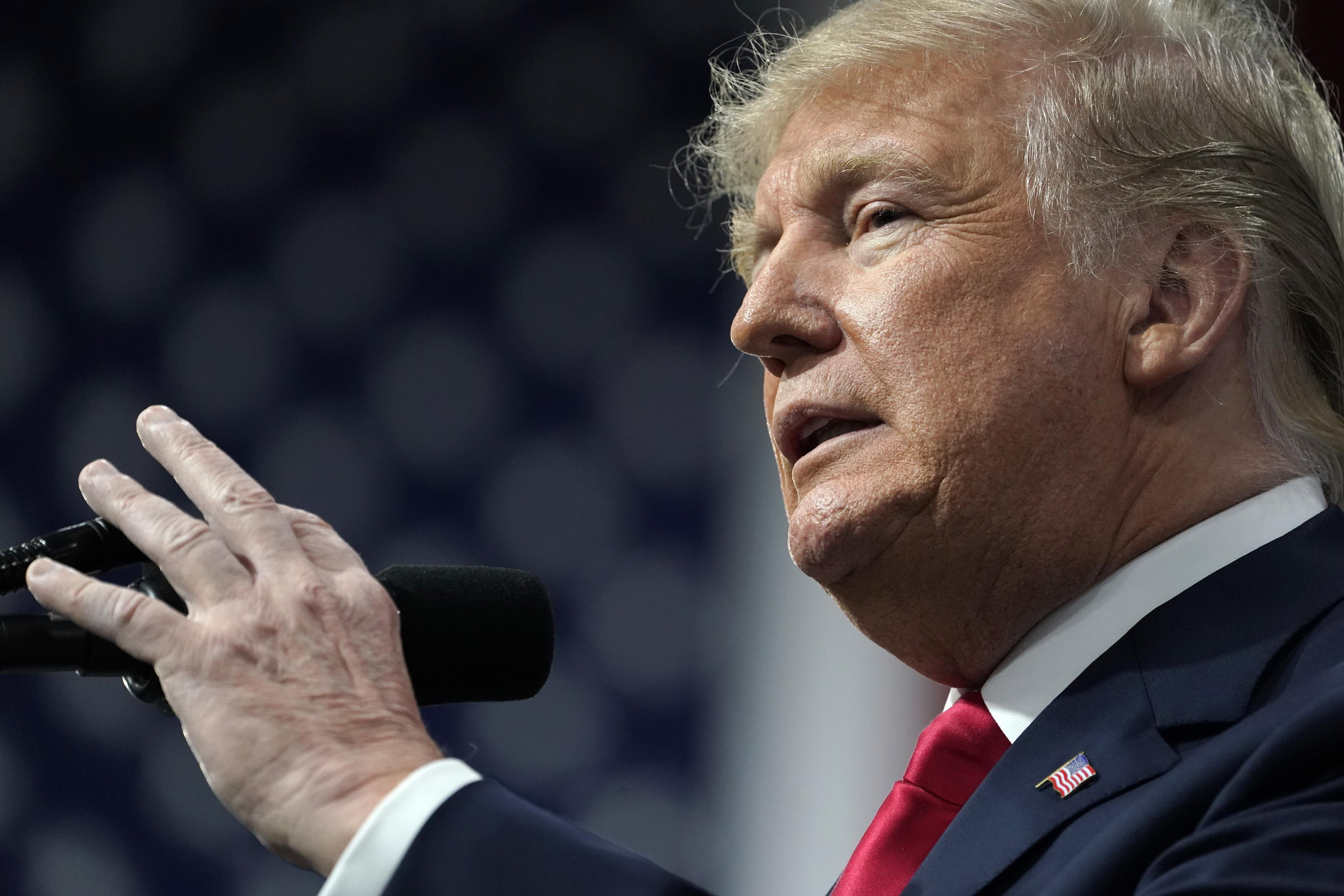 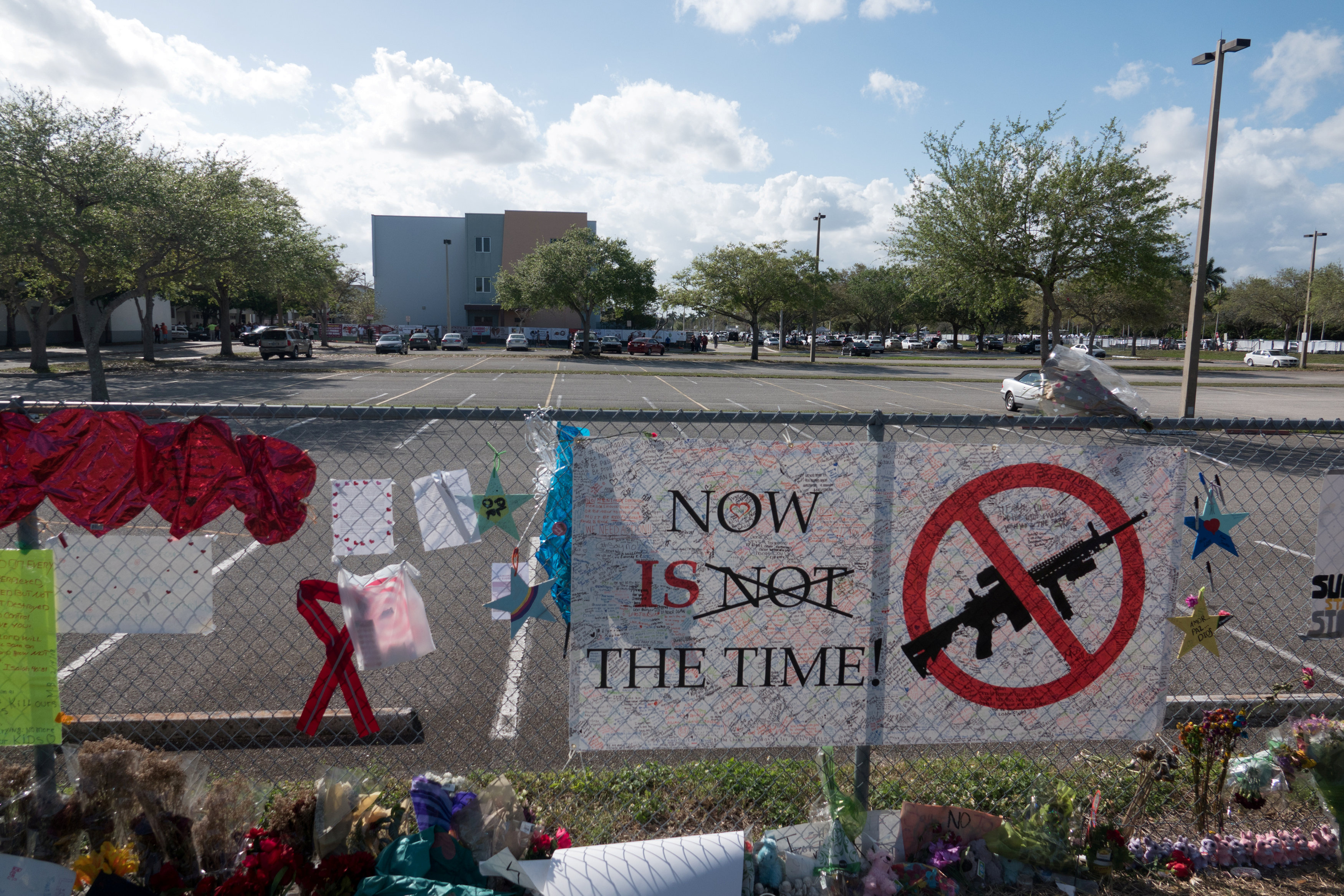 (Reuters) – Florida’s Senate will vote on Monday on some gun-related measures in response to last month’s deadly school shooting, including a proposal to train and arm teachers, but lawmakers have rejected a call by some students to ban assault weapons in the state.

The proposed Marjory Stoneman Douglas High School Public Safety Act is named after the high school in Parkland, Florida, where 17 students and staff were shot dead on Feb. 14.

Student survivors of the Parkland shooting have become prominent advocates for stricter gun laws, with some calling for a ban on semiautomatic assault-style rifles of the sort used in that attack and other recent U.S. mass shootings, as well as high-capacity magazines.

The state Senate rejected such a ban in a vote held over the weekend.

The Senate bill echoes many proposals made by Governor Rick Scott, a Republican, since the shooting, including new powers for police to temporarily confiscate guns from people deemed to be dangerous by a court.

The bill would raise the minimum age for buying any kind of gun to 21, from a current minimum of 18 for all weapons but handguns. It would also ban bump stocks, which allow semiautomatic rifles to fire like fully automatic machine guns, and mandate a three-day waiting period for the purchase of all guns, not just handguns.

The Senate’s Republican majority is expected to vote to pass the bill, Katie Betta, a spokeswoman for Senate President Joe Negron, said. The measure will then move to the legislature’s Republican-controlled House of Representatives for a vote.

The bill would require the governor’s signature to take effect. Scott has said he opposes one of the bill’s more scrutinized measures: allowing county sheriffs to set up voluntary training programs to arm teachers to prevent future massacres, similar to an idea also proposed by U.S. President Donald Trump.

Sheriffs who choose to set up a so-called “school marshal” program would have to ensure that any teacher or other school staff member who opts to become one has a valid license and has completed 132 hours of shooting and safety training.

The bill says that “a school marshal has no authority to act in any law enforcement capacity except to the extent necessary to prevent or abate an active assailant incident on a school premises.”

Some families of the victims from Douglas High School said they would hold a news conference on Monday afternoon about the legislature’s efforts, which would increase funding for school safety and mental health measures.