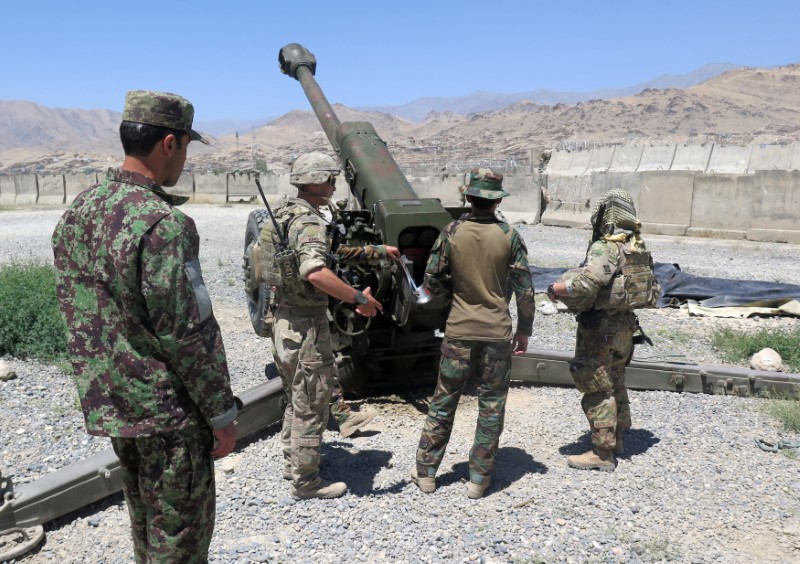 CAMP DAHLKE, Afghanistan (Reuters) – Captain Joe Fontana, a team leader with the U.S. army’s 1st Security Force Assistance Brigade, is part of a new unit but he is working on problems that have been stubbornly familiar to American military advisers in Afghanistan for years. 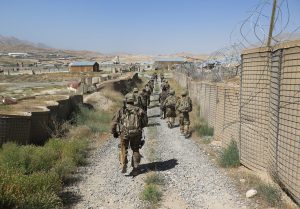 The 1st SFAB was formed last year as a new force of experienced advisers, to focus U.S. army training and support for Afghan troops and, in future, for other foreign armies.

It deployed to Afghanistan in March, putting U.S. advisers, previously largely restricted to Corps headquarters, together with front-line brigades and battalions for the first time since most international forces left in 2014.

The SFAB has arrived at a time of increasing pressure on the Afghan National Army (ANA) from Taliban fighters who overran a series of outposts and stormed the strategic city of Ghazni this week.

The problems they have found are the same ones that existed a decade ago when the NATO-led coalition began to reshape Afghan forces into an army on U.S. lines – poor logistics and organization as well as a reliance on static checkpoints that are vulnerable to attack.

Like other advisers, Fontana, who served in a combat unit in the southern Afghan provinces of Zabul and Kandahar in 2011-12 as well as in Iraq, speaks admiringly of the fighting spirit of Afghan soldiers.

But he said the army is dogged by persistent problems with supplies, maintaining equipment and making sure units get proper support, issues which for years have been an obstacle to creating Afghan forces capable of standing on their own.

“They’re not scared of much, they will fight back fine, they’re good shots. Some of their soldiers are pretty crack,” Fontana told Reuters. “But it comes down to logistics and mission command.”

The advisers help coordinate air strikes and other tactical support from U.S. forces and work with Afghan commanders on planning operations, frequently pressing them to move away from isolated checkpoints.

SFAB advisers also assisted the 203rd Corps, which is responsible for the volatile provinces south of Kabul, on the front lines in Ghazni.

But a large part of their work consists of helping commanders file requests for vehicle repair and ammunition resupply correctly or pushing units to carry out routine tasks like cleaning and maintaining their weapons and equipment.

It is the basic work of military organization and essential to ensuring army units function but it raises questions about why such problems persist despite the billions of dollars poured into training Afghan forces.

“Every kandak (battalion) we go to, regardless of where they’re located, they all have major sustainment issues,” said Command Sergeant Major Tim Bolyard, the senior non-commissioned officer in Fontana’s battalion. 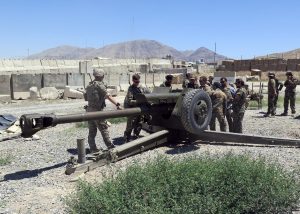 After years of training missions by units thrown together for the purpose, the SFABs are supposed to bring more consistency to advising local forces in different parts of the world.

“We needed a purpose-built organization that’s designed for advising,” said Brigadier General Scott Jackson, the 1st SFAB’s commander who was promoted this week.

The 1st SFAB, with some 800 advisers, most officers or NCOs with combat experience in Afghanistan or Iraq, is intended to be followed by five other brigades.

Working alongside mid-ranking and junior Afghan officers and soldiers, the aim is for them to obtain a better perspective on the real strength of Afghan forces.

It is a job needing patience and diplomacy, working through interpreters to coax sometimes reluctant commanders to abandon isolated checkpoints or try to develop their own solutions instead of relying on U.S. air strikes to defeat the enemy.

During a visit to an outpost in the volatile province of Wardak this month, Fontana listened for 40 minutes while a battalion commander explained the problems he was having getting the ammunition his troops needed.

It was not clear whether the correct resupply forms had reached the right person at brigade headquarters and numerous calls ensued to try to find out. It is slow and sometimes frustrating work, but the trainers say it is vital if Afghan forces are ever to stand alone.

“An easy solution for me is, when I fly up there, to drag a couple of thousand pounds of ammunition in the bird (helicopter) and drop it off for them,” Fontana said later.

“Great, but what does that achieve? Now you’re having them become dependent on the U.S. and that is the wrong answer.”