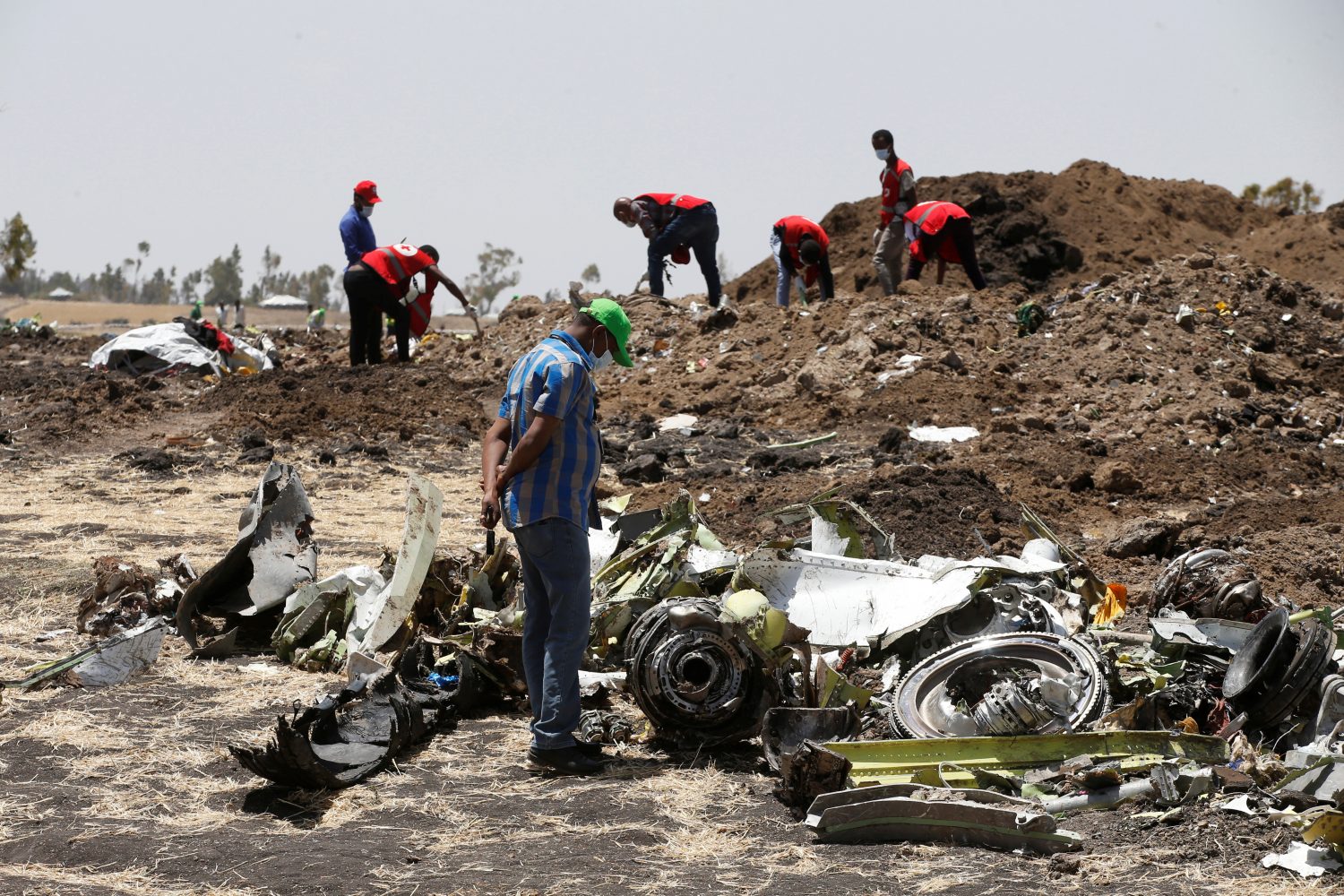 By Maggie Fick and Tim Hepher

ADDIS ABABA/PARIS (Reuters) – The investigation into the final minutes of Ethiopian Airlines Flight 302 turned on Tuesday to the secrets in the cockpit voice recorder as Boeing and a shaken global aviation industry hung on the outcome.

The voices of Captain Yared Getachew and First Officer Ahmednur Mohammed could reveal what led to the March 10 crash of the Boeing 737 MAX that has worrying parallels with another disaster involving the same model off Indonesia in October.

Black box data was downloaded in France but only Ethiopian experts leading the probe have heard the dialogue between Getachew, 29, and Mohammed, 25. The data was back in Addis Ababa on Tuesday, sources familiar with the probe told Reuters.

Experts believe a new automated system in Boeing’s flagship MAX fleet – intended to stop stalling by dipping the plane’s nose – may have played a role in both crashes, with pilots unable to override it as their jets plunged downwards.

Both came down just minutes after take-off after erratic flight patterns and loss of control reported by the pilots. However, every accident is a unique chain of human and technical factors, experts say.

The prestige of Ethiopian Airlines, one of Africa’s most successful companies, and Boeing, the world’s biggest planemaker and a massive U.S. exporter, is at stake in the inquiry.

Lawmakers and safety experts are questioning how thoroughly regulators vetted the MAX model and how well pilots were trained on new features. For now, regulators have grounded the existing fleet of more than 300 MAX aircraft and deliveries of nearly 5,000 more – worth well over $500 billion – are on hold.

Pressure on the Chicago-headquartered company has grown with news that federal prosecutors and the U.S. Department of Transportation are scrutinizing how carefully the MAX model was developed, two people briefed on the matter said.

The U.S. Justice Department was looking at the Federal Aviation Administration’s (FAA) oversight of Boeing, one of the people said. And a federal grand jury last week issued at least one subpoena to an entity involved in the plane’s development.

In the hope of getting its MAX line back into the air soon, Boeing said it will roll out a software update and revise pilot training. In the case of the Lion Air crash in Indonesia, it has raised questions about whether crew used the correct procedures.

“Lives depend on the work we do,” acknowledged Boeing boss Dennis Muilenburg, facing the biggest crisis of his tenure.

The MAX, which offers cost savings of about 15 percent on fuel, was developed for service from 2017 after the successful launch by its main rival of the Airbus A320neo.

After Ethiopia, France and the United States all noted parallels with the Indonesia crash, one person familiar with the probe said black box data showed the Ethiopian Airlines jet’s “angle of attack” was “very similar” to the Lion Air plane.

The angle of attack is a fundamental parameter of flight, measuring the degrees between the air flow and the wing. If it is too high, it can throw the plane into an aerodynamic stall.

In the hot seat over its certification of the MAX without demanding additional training and its closeness to Boeing, the FAA has said it is “absolutely” confident in its vetting.

But given the U.S. probe, Canada said it would re-examine its acceptance of the FAA validation and do its own independent certification.

The crisis has put the airline world in a spin.

One company, Norwegian Airlines, has already said it will seek compensation after grounding its MAX aircraft.

Various firms are reconsidering Boeing orders, and some airlines are revising profit forecasts given they now cannot count on maintenance and fuel savings factored in from the MAX.

Beyond the corporate ramifications, anguished relatives are still waiting to find out what happened.

Many have been visiting the crash site in a charred field to seek some closure, but there is anger at the slow pace of information and all they have been given for funerals is earth.

Abdulmajid Shariff, a Yemeni who lost his brother-in-law, was heading home on Tuesday. “I’m just so terribly sad. I had to leave here without the body of my dead brother. But I have to praise almighty God, there is nothing more to do.” 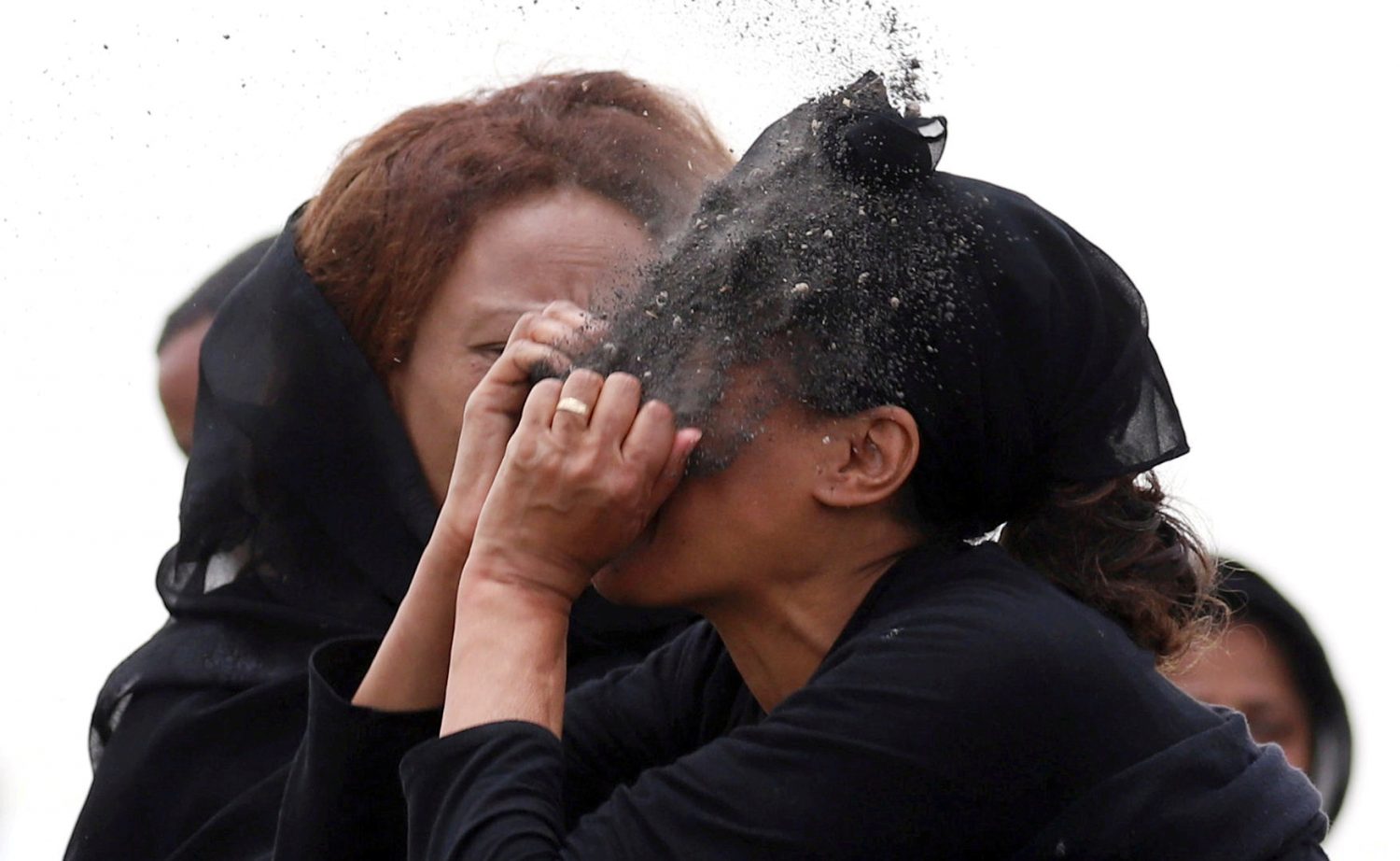 By Richard Lough and Aaron Maasho 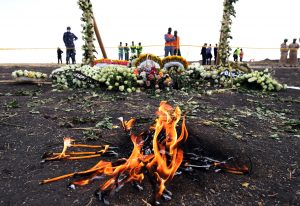 Candle flames burn during a commemoration ceremony for the victims at the scene of the Ethiopian Airlines Flight ET 302 plane crash, near the town Bishoftu, near Addis Ababa, Ethiopia March 14, 2019. REUTERS/Tiksa Negeri

Possible links between the accidents have rocked the aviation industry, scared passengers worldwide, and left the world’s biggest planemaker scrambling to prove the safety of a money-spinning model intended to be the standard for decades.

Relatives of the dead stormed out of a meeting with Ethiopian Airlines on Thursday, decrying a lack of transparency, while others made the painful trip to the crash scene.

“I can’t find you! Where are you?” said one Ethiopian woman, draped in traditional white mourning shawl, as she held a framed portrait of her brother in the charred and debris-strewn field.

Nations around the world, including an initially reluctant United States, have suspended the 371 MAX models in operation, though airlines are largely coping by switching planes.

Another nearly 5,000 MAXs are on order, meaning the financial implications are huge for the industry.

After an apparent tussle over where the investigation should be held, the flight data and cockpit voice recorders arrived in Paris and were handed over to France’s Bureau of Enquiry and Analysis for Civil Aviation Safety (BEA) agency.

A BEA spokesman said he did not know what condition the black boxes were in. “First we will try to read the data,” he said, adding that the first analyses could take between half a day and several days. 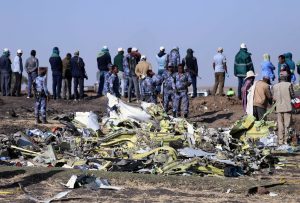 The investigation has added urgency since the U.S. Federal Aviation Administration (FAA) on Wednesday grounded the 737 MAX aircraft citing satellite data and evidence from the scene indicating some similarities and “the possibility of a shared cause” with October’s crash in Indonesia that killed 189 people.

Though it maintains the planes are safe, Boeing has supported the FAA move. Its stock has fallen about 11 percent since the crash, wiping nearly $26 billion off its market value.

It is unclear how long the Boeing aircraft will be grounded.

A software fix for the 737 MAX that Boeing has been working on since the Lion Air crash in October in Indonesia will take months to complete, the FAA said on Wednesday.

Deliveries of Boeing’s best-selling jets have been effectively frozen, though production continues.

And in what may presage a raft of claims, Norwegian Air has said it will seek compensation from Boeing for costs and lost revenue after grounding its fleet of 737 MAX. Japan became the latest nation to suspend the 737 MAX planes on Thursday. And airline Garuda Indonesia said there was a possibility it would cancel its 20-strong order of 737 MAXs, depending on what the FAA does.

Under international rules, the Ethiopians are leading the investigation but France’s BEA will conduct black box analysis as an advisor. The U.S. National Transportation Safety Board (NTSB) will also have an influential role as representatives of the country where the Boeing plane was made.

The choice of the BEA followed what experts say appears to have been a tug-of-war between national agencies, with Germany initially invited to do the analysis.

Ethiopian Airlines criticized a French-backed investigation into a crash in Lebanon in 2010, when an Ethiopian plane crashed into the sea after take-off. It said the investigation was biased against the pilots, who were blamed for the crash.

There is a small pool of countries including Britain, France, the United States, Canada and Australia that are seen as leading investigators. But only France and the United States have the experience gleaned from being present at almost every crash involving an Airbus or Boeing respectively.

Since the Indonesia crash, there has been attention on an automated anti-stall system in the MAX model that dips the plane’s nose down.

The pilot of Flight 302 had reported internal control problems and received permission to return, before the plane came down and burst into a fireball on arid farmland.

Relatives are desperate to know what happened and to receive fragments if not corpses, given the fire and destruction at the site. They were at least able to vent their grief.

“We saw where he died and touched the earth,” said Sultan Al-Mutairi, who came from Riyadh to say goodbye to his brother Saad, who ran a recruitment agency in Kenya.