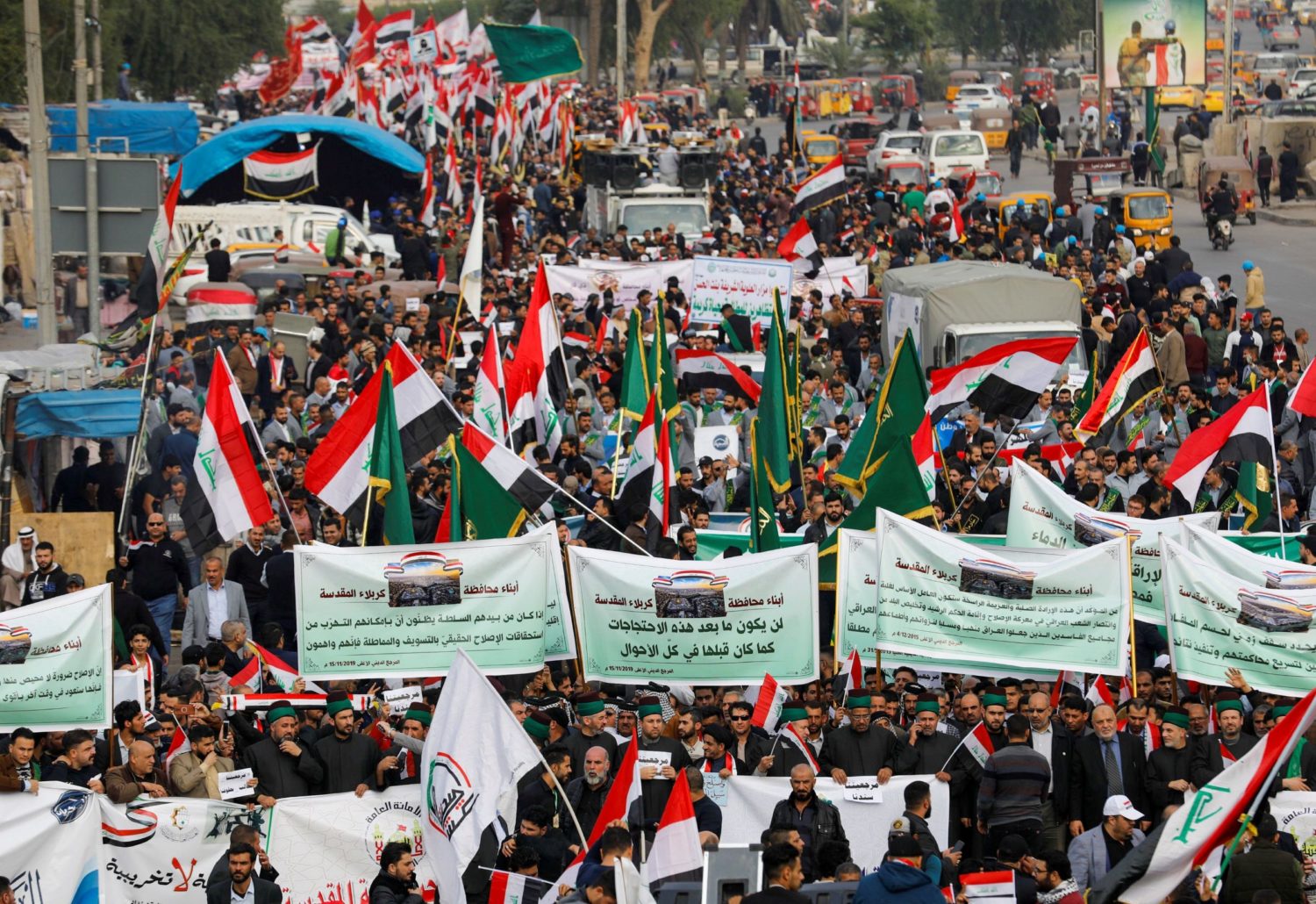 BAGHDAD (Reuters) – Iraq’s top Shi’ite Muslim cleric said that a new prime minister must be chosen without foreign interference in an apparent nod to Iranian influence as gunmen killed at least eight people near a Baghdad protest site on Friday.

More than 20 others were wounded near Tahrir Square, the main protest camp in the Iraqi capital, police and medics said, a week after Iraqi prime minister Adel Abdul Mahdi said he would resign following two months of anti-government protests.

Grand Ayatollah Ali al-Sistani’s comments followed reports that a senior Iranian commander had been in Baghdad this week to rally support for a new government that would continue to serve Shi’ite Iran’s interests.

Sistani has repeatedly condemned the killing of unarmed protesters and has also urged demonstrators to remain peaceful and stop saboteurs turning their opposition violent.

The departure of Abdul Mahdi, whom Tehran had fought to keep at the helm, is a potential blow to Iran after protests that have increasingly focused anger against what many Iraqis view as Iranian meddling in their politics and institutions.

Sistani, Iraq’s most senior Shi’ite cleric, has long opposed any foreign interference as well as the Iranian model of senior clergy being closely involved in running state institutions.

He only weighs in on politics in times of crisis and holds enormous sway over public opinion.

“We hope a new head of government and its members will be chosen within the constitutional deadline” of 15 days since the resignation was formalized in parliament on Sunday, a representative of Sistani said in his Friday sermon in the holy city of Kerbala.

“It must also take place without any foreign interference,” he said, adding that Sistani would not get involved in the process of choosing a new government.

The burning of Iran’s consulate in the holy city of Najaf, the seat of Iraq’s Shi’ite clergy, and subsequent killings of protesters by security forces in southern cities paved the way for Sistani to withdraw his support for Abdul Mahdi.

Abdul Mahdi pledged to step down last week after Sistani urged lawmakers to reconsider their support for the government following two months of anti-establishment protests where security forces have killed more than 400 demonstrators.

More than a dozen members of the security forces have been killed in the clashes.

Washington on Friday imposed sanctions on three Iranian-backed Iraqi paramilitary leaders who it accused of directing the killing of Iraqi protesters. A senior U.S. Treasury official suggested the sanctions were timed to distance those figures from any role in forming a new government.

Iraq’s two main allies, the United States and Iran, have acted as power brokers in Iraq since the 2003 U.S. invasion that toppled Saddam Hussein, although Tehran’s allies have mostly dominated state institutions since then.

Soleimani was reported to be in Baghdad this week.

Abdul Mahdi’s government, including himself, will stay on in a caretaker capacity until a new government can be chosen, the prime minister said last week.

President Barham Salih officially has 15 days – until Dec. 16 – to name a new premier tasked with forming a government that would be approved by parliament up to a month later.

Iraqi lawmakers say they will then move to hold a general election next year but protesters say that without a new, fully representative electoral law and unbiased electoral commission, a snap vote will keep corrupt politicians in power.