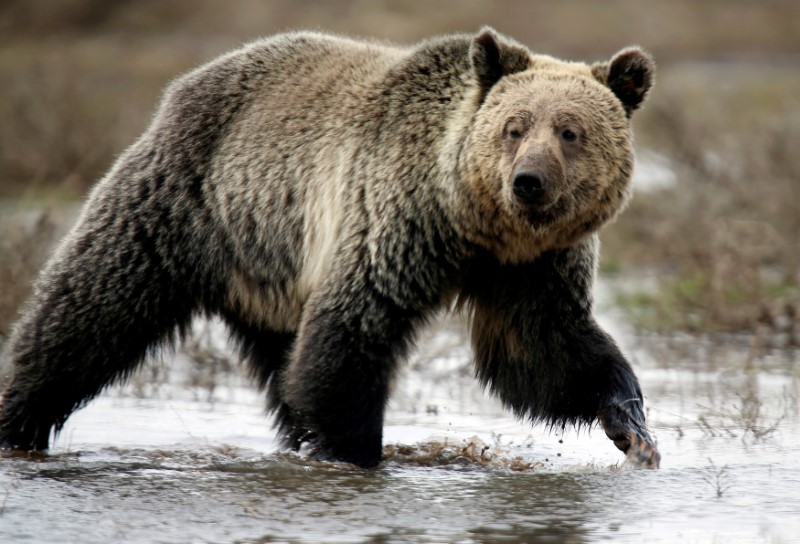 PINEDALE, Wyo. (Reuters) – A federal judge on Monday ordered Endangered Species Act protections restored to grizzlies in and around Yellowstone National Park, halting plans for the first licensed trophy hunts of the bears in the region in more than 40 years.

U.S. District Judge Dana Christensen in Missoula, Montana, sided with environmentalists and native American groups by overruling the U.S. Fish and Wildlife Service decision to strip the grizzlies of their status as a threatened species.

The outcome caps one of the most high-profile legal battles over the Endangered Species Act in many years, rivaling previous disputes surrounding the gray wolf and northern spotted owl.

The ruling came as the Trump administration is seeking to rewrite Endangered Species Act regulations that scientists say would erode wildlife protection for the benefit of commercial interests.

The Trump administration’s decision in June of last year to “de-list” the grizzly, formally proposed in 2016 during the Obama era, was based on agency findings that the bears’ numbers had rebounded enough in recent decades that federal safeguards were no longer necessary.

The de-listing, welcomed by big-game hunters and cattlemen, had applied to about 700 Yellowstone-area grizzlies in Wyoming, Idaho and Montana.

Environmentalists countered that treating those bears separately from other grizzly populations in Montana and elsewhere in the Lower 48 states was biologically unsound and illegal under the Endangered Species Act, and the judge agreed.

Grizzlies, which are slow to reproduce, number fewer than 2,000 bears across the Lower 48. That is far below an historic high of 100,000 before widespread shooting, poisoning and trapping reduced the bears’ population to just several hundred by 1975, when they were placed under federal protection.

Environmentalists have said that while grizzlies have made a comeback, their recovery could falter without continued federal safeguards. They point to, among other things, alterations in the bears’ food supply from climate change and human threats posed by poachers and road traffic.

Christensen found that the Fish and Wildlife Service had failed to apply the best available science, as required under the law, in evaluating continued threats to grizzly populations, including limitations in its genetic diversity.

The judge pointed to two studies cited by the agency that he said actually contradicted the government’s own conclusions that the Yellowstone grizzlies could remain genetically self-sufficient. In his 47-page opinion, Christensen called the agency’s reasoning “illogical.”

The judge’s ruling makes permanent a court order barring Wyoming and Idaho from going ahead with plans to open grizzly hunting seasons allowing as many as 23 bears in the two states to be shot and killed for sport outside of Yellowstone park. The season had been set to begin on Sept. 1.

U.S. law prohibits hunting altogether inside the park, and Montana had decided against a grizzly hunt, citing its concerns about long-term recovery of a bear population that is arguably one of the most celebrated and photographed in the world.

Native American tribes, which revere the grizzly as sacred, sought reinstatement of its threatened status as essential to protecting their religious practices.

Ranchers, who make up a powerful political constituency in Western states, have strongly advocated de-listing grizzlies, arguing the bears’ growing numbers pose a threat to humans and livestock. Agitation for state management of the bears also came from hunters, who highly prize them as trophy animals.

The judge said he discounted such factors.

“This case is not about the ethics of hunting and it is not about solving human- or livestock-grizzly conflicts as a practical or philosophical matter,” he wrote. Instead, it turned strictly on his determination that the Fish and Wildlife Service had exceeded its authority.

The agency said it stood by its de-listing action, adding the was reviewing the ruling and “considering next steps.”

Wyoming Governor Matt Mead, a staunch critic of the Endangered Species Act, said he was “disappointed” by Monday’s decision, citing $50 million he said his state had spent on grizzly management over the past 15 years.