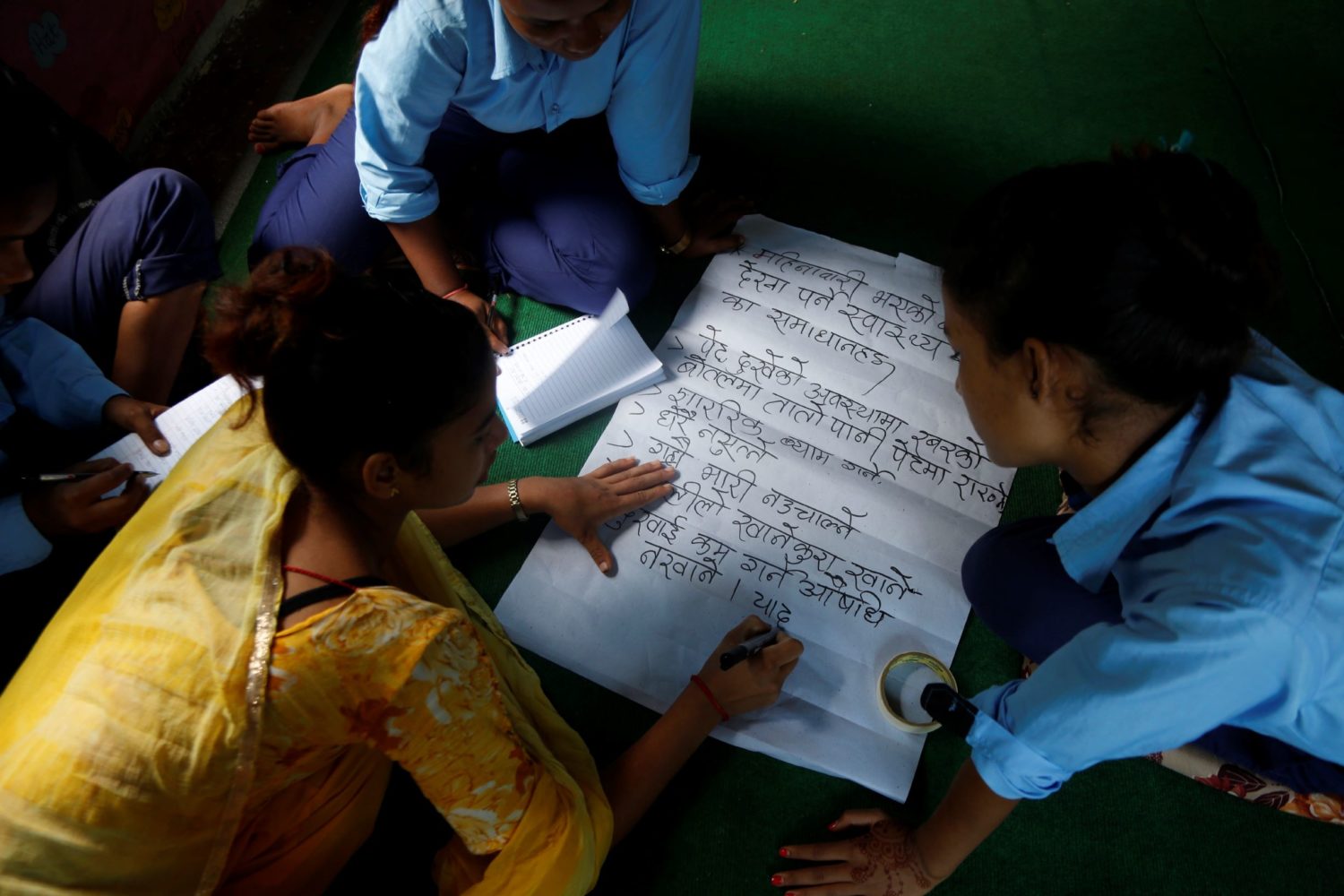 SURKHET, Nepal (Thomson Reuters Foundation) – If it wasn’t for her self-annointed “Big Sister”, Punam Pun Magar would have quit school at 14 to marry a man nearly twice her age, bear him babies and tend house.

Two in five Nepalese girls just like Magar marry before they turn 18: one of the highest rates in the world, despite child marriage being illegal in the impoverished Himalayan country.

The bad times for Magar began when both her parents died and her aunt’s family felt burdened, saying she must pay her way.

“They told me not to go to school and do household chores. After a point, they wanted to get rid of me … so they started planning my marriage to a 26-year-old man,” Magar said as tears welled up.

That’s when Big Sister Krishna Paudel rode to her rescue, snatching her from a potential life of illiteracy, poverty and ill health: common fallout of so many child marriages in Nepal.

Hundreds of Big Sisters – many of them former child brides themselves – have volunteered to counsel teenaged girls like Magar, as well as their families and communities, on the impact of marrying young, using their own stories as cautionary tales.

“When I met her, I told her about child marriage – the legal consequences, the social fallout, everything. Since then, I’ve seen phenomenal change in her. That knowledge empowered her and now she’s headed towards a bright future,” said Paudel.

The legal age of marriage in Nepal is 20 for men and women alike. Yet child marriage remains deeply rooted in conservative, mainly Hindu Nepal, where many parents marry off their teenaged daughters to boost the wider family finances.

This drives a vicious cycle of ill health, malnutrition and ignorance, since a child bride is more likely to leave school and experience problems in pregnancy or birth, say campaigners.

Nepal has the third highest child marriage prevalence in South Asia, according to the United Nations.

The ‘Sisters for Sisters’ programme was introduced as part of a government drive to end child marriages in Nepal by 2030.

The Sisters’ top job – to keep girls in school.

Activists say dropout rates rise when girls are co-opted into household chores, pushed into early marriage or held back by discrimination and deep-seated taboos over periods.

So when 25-year-old Paudel noticed Magar’s attendance dipping, she tracked her down and weighed in with advice – and kept dishing out the same message over many months.

The wedding was called off; Magar went back to school.

“Had it not been for my Big Sister, I would have had three or four children by now, and they would be studying here instead of me,” said Magar, 17, at her government-run school in western Nepal’s Surkhet district.

A wife at 15 then a mother at 17, Big Sister Rachana Bantha said she had grappled with poor health and poverty since her forced marriage a decade ago.

“I felt like killing myself. I remember how horrible it all was – but that is what motivates me every day to help these girls. They should not have to go through what I did,” Bantha told the Thomson Reuters Foundation.

“I can save their lives,” she said, wearing the Big Sisters’ uniform of pink tunic and black pleated trousers.

Bantha said she had stopped at least a dozen child marriages in the past four years.

He blamed poverty and illiteracy, as well as parents hoping to stop the taboo of unmarried sex and pregnancy.

The main enemy, however, is custom.

“It is ingrained in our society’s fabric. It is considered the norm. Even politicians and teachers are marrying their children off in some places. If they don’t practice what they preach, how can we expect any change?” he said.

Teenagers are also eloping more often, a trend campaigners attribute to better access to mobile phones and the internet. As for the cause, they said some girls are fleeing poverty or forced marriage, others chase independence and sexual freedom.

Ruchal the official said it was important to normalise live-in relationships so teenagers did not feel compelled to marry.

Nepal should also give girls some sort of incentive to stay in school so they aspire to a career of their own, said Sumnima Tuladhar of the Kathmandu-based child rights group CWIN Nepal.

“They need to be excited about education. They don’t see a future after finishing school. We have to create a society where young people have something more than marriage to look forward to,” she said.

Poverty is the main problem with girls routinely pushed into domestic work in a country where one in five survives on less than $1.25 a day, said Ananda Paudel of development charity VSO, which is behind the Sisters for Sister project.

The programme began in 2017 and has boosted girls’ confidence along with their school attendance, said Paudel.

“They are so empowered. Had it not been for this, we cannot imagine where they would have been right now. How many would have disappeared from the system, the society,” he said.

And the results already show.

Magar – alert in her blue school uniform – seems worlds away from the 14-year-old orphan who came so close to dropping out.

“I’m going to study to become a lawyer so that I can help women. They face so much discrimination and do not find legal assistance,” she said. “I want to help them give a voice.”