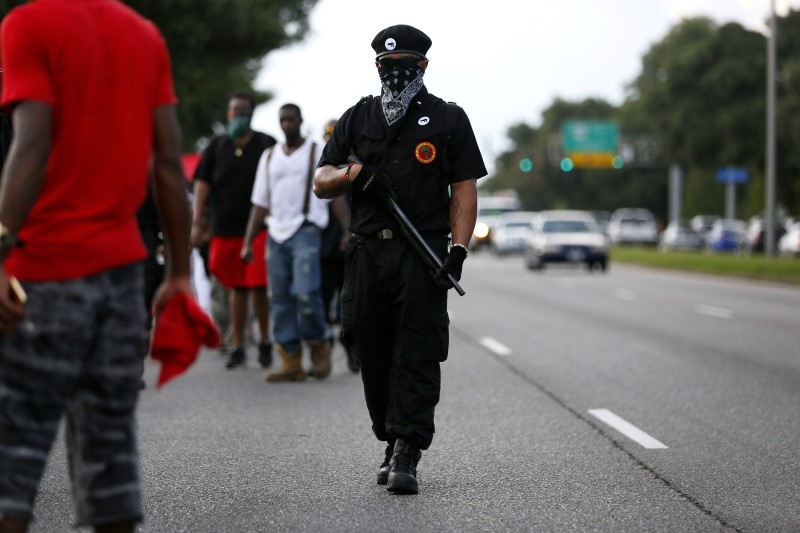 (Reuters) – The New Black Panther Party, a “black power” movement, will carry firearms for self-defense during demonstrations in Cleveland ahead of next week’s Republican convention if allowed under Ohio law, the group’s chairman said.

The plan by the group could add to security headaches for the Ohio city after last week’s killing of five police officers in Dallas by a U.S. army veteran who had been drawn to black separatist ideology, including on Facebook, before hatching his plan to target white police officers.

Several other groups, including some supporters of presumptive Republican presidential nominee Donald Trump, have said they will carry weapons in Cleveland, leading to concerns about rival groups being armed in close proximity.

“If it is an open state to carry, we will exercise our second amendment rights because there are other groups threatening to be there that are threatening to do harm to us,” Hashim Nzinga, chairman of the New Black Panther Party, told Reuters in an interview.

“If that state allows us to bear arms, the Panthers and the others who can legally bear arms will bear arms.”

Nzinga condemned the Dallas shootings as a “massacre” and said his group played no role in the attack.

Police in Dallas, where Texas’s “open carry” law allows civilians to carry guns in public, said seeing multiple people carrying rifles led them initially to believe they were under attack by multiple shooters.

Officials in Ohio have said it will be legal for protesters to carry weapons at demonstrations outside the convention under that state’s gun laws.

Eric Pucillo, vice president of Ohio Carry Inc., a non-partisan firearms rights, education and advocacy group, said he supports the rights of others to carry firearms close to the convention site.

“As long as they’re abiding by the law, I see no issue with it,” he said.

Nzinga said he expected “a couple hundred” members of the New Black Panther Party to join a black unity rally that is scheduled to begin on Thursday. Nzinga said he and the Panthers plan to leave Cleveland on Sunday, the day before the convention officially opens.

His group plans to join a “black unity” convention in Cleveland that will hold a series of protest events in the city from this Thursday through at least Sunday.

“We are there to protect… (the black unity) event. We are not trying to do anything else,” he said. “We are going to carry out some of  these great legal rights we have — to assemble, to protest and (to exercise) freedom of speech.”

“Black Power” groups promote defense against racial oppression, with some advocating for the establishment of black social institutions and a self-sufficient economy.

But the center said the group has not been found to have actually carried out any violent attacks.

Nzinga complained that his group is regularly demonized. “When we use our rights, the police want to take it away from us and they can’t,” he said. “We protect our community and they make us the villain.”

Law enforcement officials say the New Black Panther Party and other black militant groups have not been implicated in any attacks against police since the 2014 police killing of an unarmed black teenager in Ferguson, Missouri. They also say the groups played no roles in last week’s attack in Dallas.

Nzinga says his group has grown amid racial tensions in the wake of a series of police killings of black men in the past two years. The Southern Poverty Law Center says the number of black militant chapters around the country grew from 113 to 180 in 2015.

The center says there are 892 hate groups total nationwide and at least 998, anti-government “patriot groups.” It says white hate groups, such as the Aryan Brotherhood, have a much longer track record of carrying out violent attacks than black extremist groups.