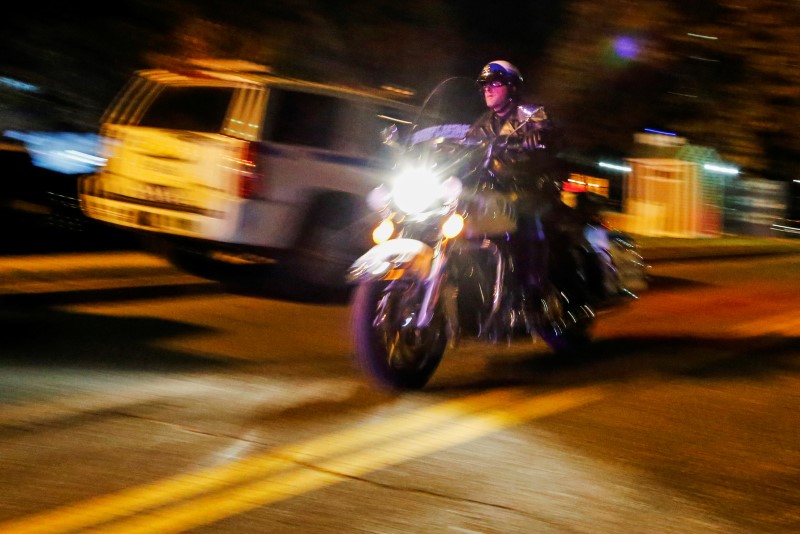 WASHINGTON (Reuters) – Sixty-six police officers were killed on the job by felons in 2016, up about 61 percent from 41 deaths a year ago, the U.S. Federal Bureau of Investigation said on Monday.

The number was the second highest since 2011, when 72 officers were killed by felons, according to the FBI report.

U.S. Attorney General Jeff Sessions in a statement called the numbers “shocking” and “unacceptable,” and said the Justice Department would work toward reducing violent crime.

The findings bolster the so-called Blue Lives Matter movement, which advocates tougher hate-crime sentences for the murder of police officers. It was launched in response to Black Lives Matter, a campaign against police brutality toward black men, and gained momentum last year after police officers were killed in both Dallas and Baton Rouge.

Forty-one officers killed last year were employed by city police departments, and 30 officers were located in the U.S. South, the annual data show.

The most common circumstances involved ambushes, followed by responses to disturbance calls.

Accidental deaths of police officers in 2016 rose to 52 from 45 in 2015, mostly involving vehicles, the data show.

Earlier this year, President Donald Trump issued an executive order directing the Justice Department to develop strategies to better protect law enforcement officials and pursue legislation to increase penalties against those who kill or injure officers in the line of duty. 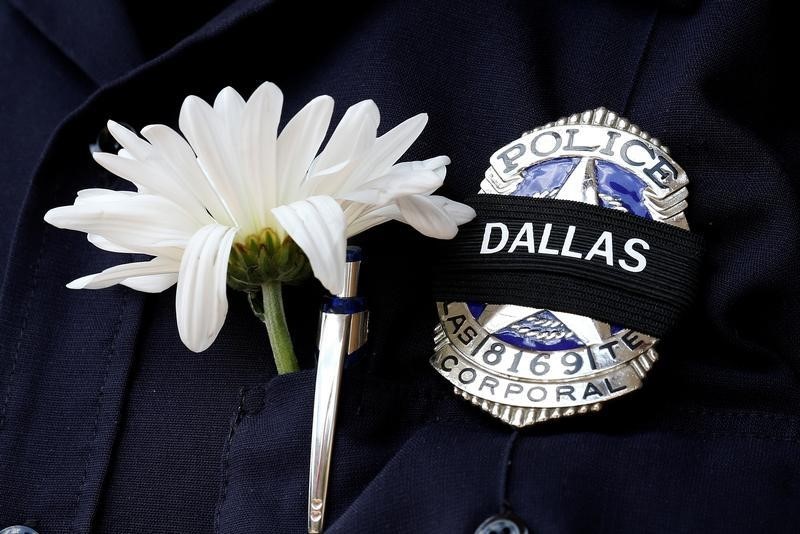 By Ernest Scheyder and Brian Thevenot

DALLAS (Reuters) – Dallas police detective Frederick Frazier strained to lift the dead weight of a fallen fellow officer from a hospital gurney and put him into a body bag. He pulled the zipper closed.

Frazier stared down, thinking – this man does exactly what I do; has a family just like mine. He’s not going home.

Frederick was among about 100 officers who had seen all five fatally shot Dallas policemen arrive at the emergency room of Parkland Memorial Hospital near the Oak Lawn section of the city early on Friday morning.

Seven others, and two civilians, were wounded. They had all been shot on Thursday night by one brutally proficient shooter who police and protesters initially believed was a small army carrying out a choreographed assault. The shooter, in later conversations with police during a standoff, suggested he was avenging a spate of police shootings of black men.

In the city’s struggle to cope with the aftershocks of the deadliest day for law enforcement in America since the Sept. 11, 2001, al Qaeda attacks, a Blue Lives Matter movement has emerged here. It has been embraced by protesters who witnessed the slaughter of officers who had walked with them, taken selfies with them as they protested shootings by police nationwide.

The attack on police complicates the already angst-ridden debate over officer-involved shootings. But many citizens, officers and officials of all political stripes here have so far responded by embracing one another, raising hopes for a softening of hardened positions and often vicious rhetoric.

“We are a polarized people,” said the Rev. Dr. Michael W. Waters from the pulpit on Sunday at Joy Tabernacle A.M.E. Church in Cedar Crest neighborhood, south of downtown Dallas. “Individuals believe that, if you are one thing, you can’t be another thing … but standing for justice does not mean standing against all police officers.”

Dallas now finds itself at the center of a tense national debate about whether police are the problem or solution, victimizers or victims. The city would seem to be an unlikely target for retaliation against police shootings, given that its officers have not shot a single suspect – of any race – so far this year, compared with 23 such incidents in the whole of 2012.

The decrease follows an intensive effort to train officers in the appropriate use of force.

Violent crime in Dallas has been slashed by nearly half between 2003 and last year, when there were 9,038 violent crime incidents, according to Dallas Police Department and Federal Bureau of Investigation records.

Still, the department – along with the city of Dallas and much of Texas – struggles to overcome a history of racial strife.

In the Parkland Memorial E.R., the wounded officers arrived, one by one. Frazier watched, trying to assess each one’s chances. Two seemed lifeless. They weren’t going to make it. Another, Mike Smith, 55, came in talking.

Frazier was almost sure he would live.

Then, soon after, the surgeon delivered the news: Smith had died in surgery, Frazier said.

Dallas Police Chief David Brown was among those at Parkland Memorial, consoling officers and their families, starting at about 2 a.m., Frazier said. Nearly an hour later, Brown walked into a room in the E.R. with more news.

“They just got him,” Frazier recalled the chief saying.

Minutes before, in a parking garage at El Centro Community College, the Dallas SWAT team had ended the standoff with Johnson by sending in a robot and detonating a pound of C4 explosives. The gunman – later identified as Army Reserve combat veteran Micah Xavier Johnson, 25, of Mesquite, Texas – told police he had come to kill white police officers.

He killed four of them – Lorne Ahrens, 48; Michael Krol, 40; Brent Thomson, 43; and Smith. He also gunned down Hispanic officer Patrick Zamarripa, 32, a Navy reservist and a U.S. Marine veteran.

The chief, it seemed, had hoped the news would lift the somber mood in the room, Frazier said.

Spokespeople for the Dallas Police Department did not respond to multiple requests for official department comment on this story.

Minutes before the shootings, Waters, the pastor, had addressed the crowds of protesters downtown. Then he saw what he later called “a mass of humanity” stampeding toward him as he ducked behind a pillar.

Among those in the crowd was Marcus McNeil, 19, a sophomore offensive lineman on the Southern Methodist University football team. As the shooting started, McNeil saw the fear in the faces of the police officers around him.

The message spread from officers through the crowd as the wave of panic rose with the flurry of rifle shots.

McNeil fled with his best friend, Tessa Johnson, 19, a fellow SMU student. He watched as officers first tried to hurry protesters out of harm’s way, then rushed toward the gunfire with guns drawn.

Minutes before, during the protest, McNeil could not have felt safer, surrounded by officers who seemed determined to protect the crowd’s right to publicly air their grievances with law enforcement, and to engage with them warmly.

“They were absolutely amazing. They actually led, and blocked off the streets as we went,” McNeil recalled. “There was a loving spirit; no negativity among anyone; just kindness.”

BLESSED ARE THE PEACEMAKERS

Two days later, that spirit returned to Joy Tabernacle A.M.E. Church, where a predominantly black crowd of about 50 congregants made the joyful noise of a thousand. Waters founded the church seven years ago and remains senior pastor.

Sharmeene Hayes, 45, opened the Sunday service with a prayer.

“Send a peace across the city of Dallas that surpasses all understanding,” she implored. “We thank you, Lord, for our police officers. Post your guardian angels over them.”

Off to the right, Dallas police officer Margarita Argumedo, wearing her uniform, swayed gently to the boisterous gospel music filling the small room. She leaned on the chair in front of her, her eyes closed, for minutes at a time, praying and resting. She had not slept much since Thursday.

Neither had fellow police officer Chelsea Whitaker, who sat two rows ahead.

Both women, who had been invited to the service, were celebrated and given the opportunity to speak. Whitaker offered a gripping portrait of everyday threats officers face.

Argumedo asked for prayers, and for rest.

“You can’t sleep,” she said. “When you lay down, you start thinking about those that didn’t come back.”

Waters referenced the teachings of Jesus in the biblical book of Matthew. He at first spoke softly, then in a rising, rhythmic style that is the hallmark of many African-American preachers.

By the time he hammered home the essential challenge of the sermon – and the past week’s bloodshed – his baritone voice shook the room.

“Do you truly think that all lives matter?” he roared. “If you want to be a peacemaker – if you want to be like Jesus – we have to love our enemies and pray for those who despise us.

“If you think that black lives matter, then you know that all lives matter – and that blue lives matter. Can you honor and celebrate those officers who protect us every day? … If you stand with those who are criticized, you will get closer to God.”

(Reporting by Brian Thevenot and Ernest Scheyder, additional reporting by Jon Herskovitz in Austin and Marice Richter in Dallas; editing by Ross Colvin)