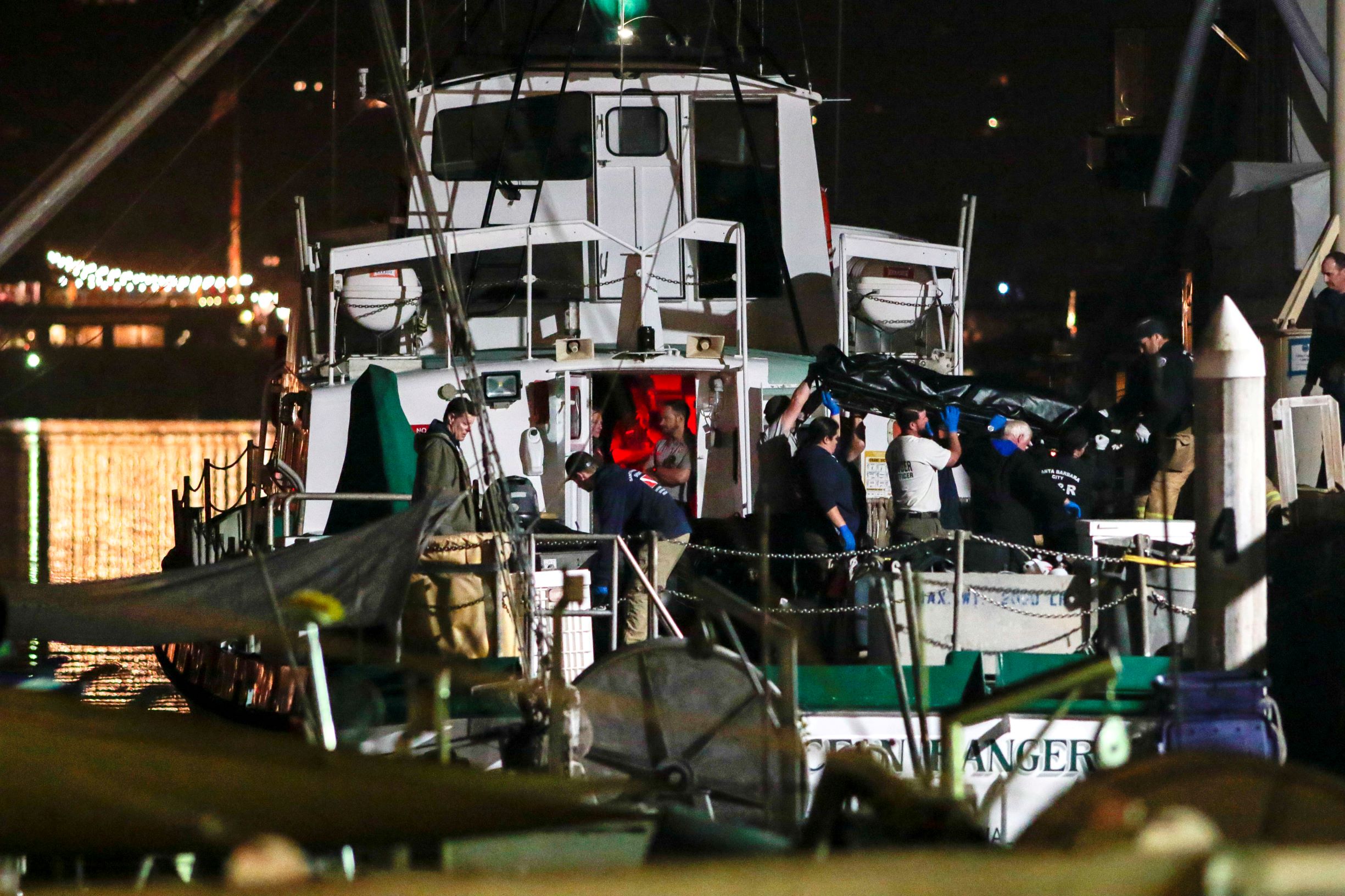 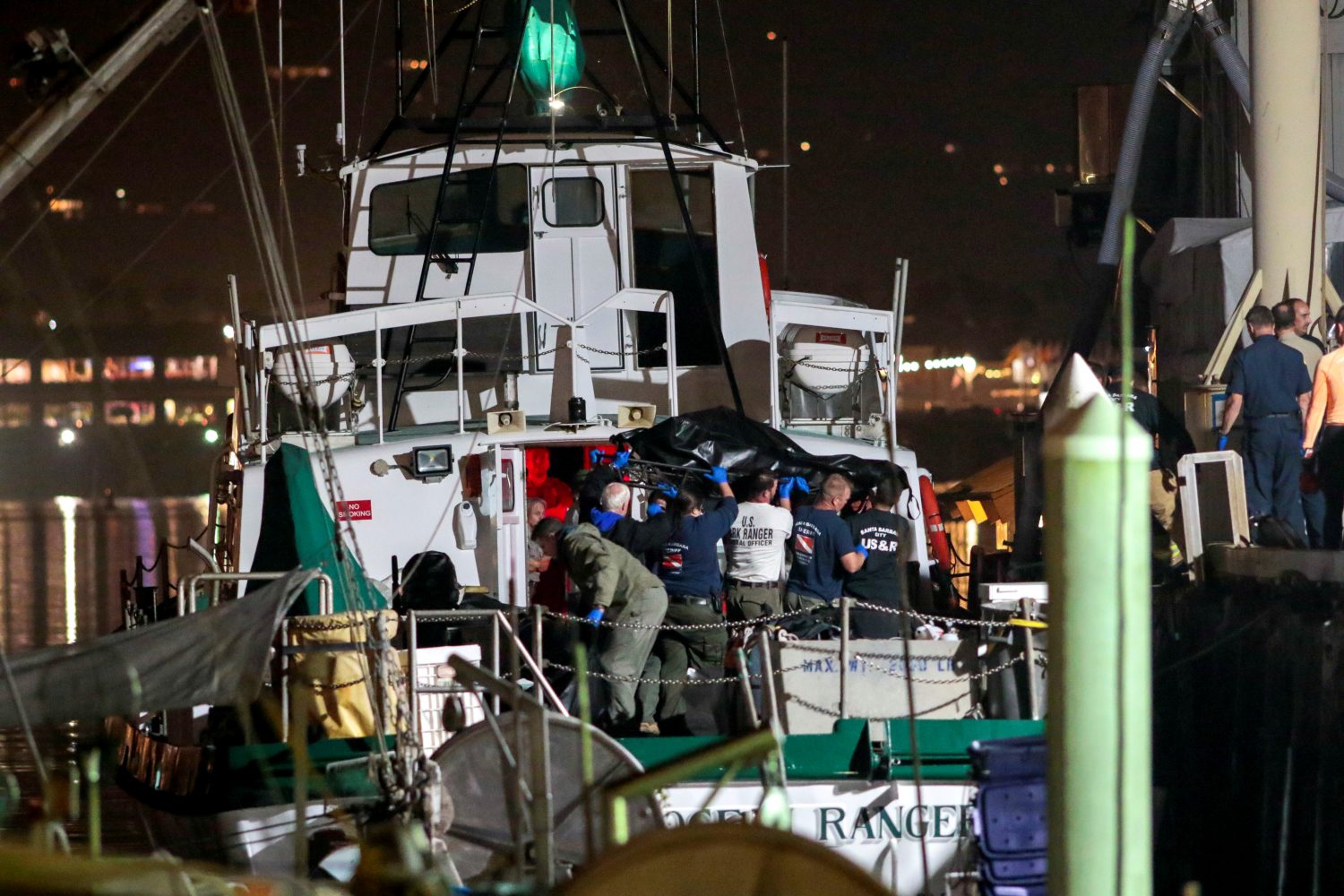 (Reuters) – Federal investigators on Wednesday interviewed the captain and crew of a dive boat that caught fire and sank off the California coast and they also met with families of 34 people killed in one of the state’s worst maritime disasters.

The badly burned bodies of all but one of the victims of the early Monday morning blaze aboard the 75-foot (23-meter) Conception have been recovered, officials said.

“I can’t imagine what the families are going through right now. It is horrific and they are devastated,” National Transportation Safety Board member Jennifer Homendy said at a news conference.

NTSB experts were spending their first full day of the investigation interviewing witnesses and mapping the wreckage of the Conception, which lay upside down some 65 feet (20 meters) below the surface, Homendy said.

A separate team inspected the Vision, a similar ship operated by the same dive boat company, Truth Aquatics. The Conception, which sank off Santa Cruz Island, will ultimately be raised from the ocean floor.

Truth Aquatics has suspended its dive expeditions during the investigation, which Homendy said would be “very lengthy, detailed and comprehensive.” The preliminary findings would be issued in 10 days and the final report would take up to 18 months to complete, Homendy said.

The only survivors of the accident, the captain and four crew members, were on deck when the flames erupted shortly after 3 a.m. Pacific time and were able to escape in an inflatable lifeboat, investigators said.

The 34 victims, including passengers and one crew member, were sleeping below deck. Santa Barbara County Sheriff Bill Brown has said the two exits, a stairway to the galley and an escape hatch may have both been blocked by fire.

More details emerged about the victims, who ranged in age from 17 to 60.

A family of five, a teacher and his daughter, and a diving instructor and marine biologist were among those believed to have died, according to local media.

Also killed were Patricia Beitzinger and Neal Baltz, a couple from Arizona who were passionate about diving and “died doing something that they loved together,” Baltz’s father John told local media.

Popi Heron, a 54-year-old finance professional from the San Francisco Bay area, had met them earlier this summer during a dive boat trip in the South Pacific and they had hit it off instantly, she said in a phone interview. 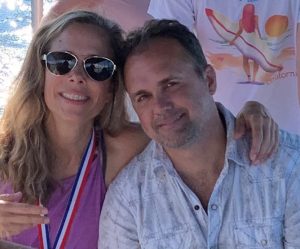 “Even though I didn’t know them very long, their humanity, their beauty as people, their passion as divers, they’re really just wonderful people and I am really going to miss them,” Heron said.

The couple had invited Heron to join them on the trip aboard the Conception, but she said she declined because of concerns about the water being cold.

Another victim was marine biologist Kristy Finstad, 41, who was leading the dive trip and co-owned Worldwide Diving Adventures that chartered the boat for a three-day excursion. 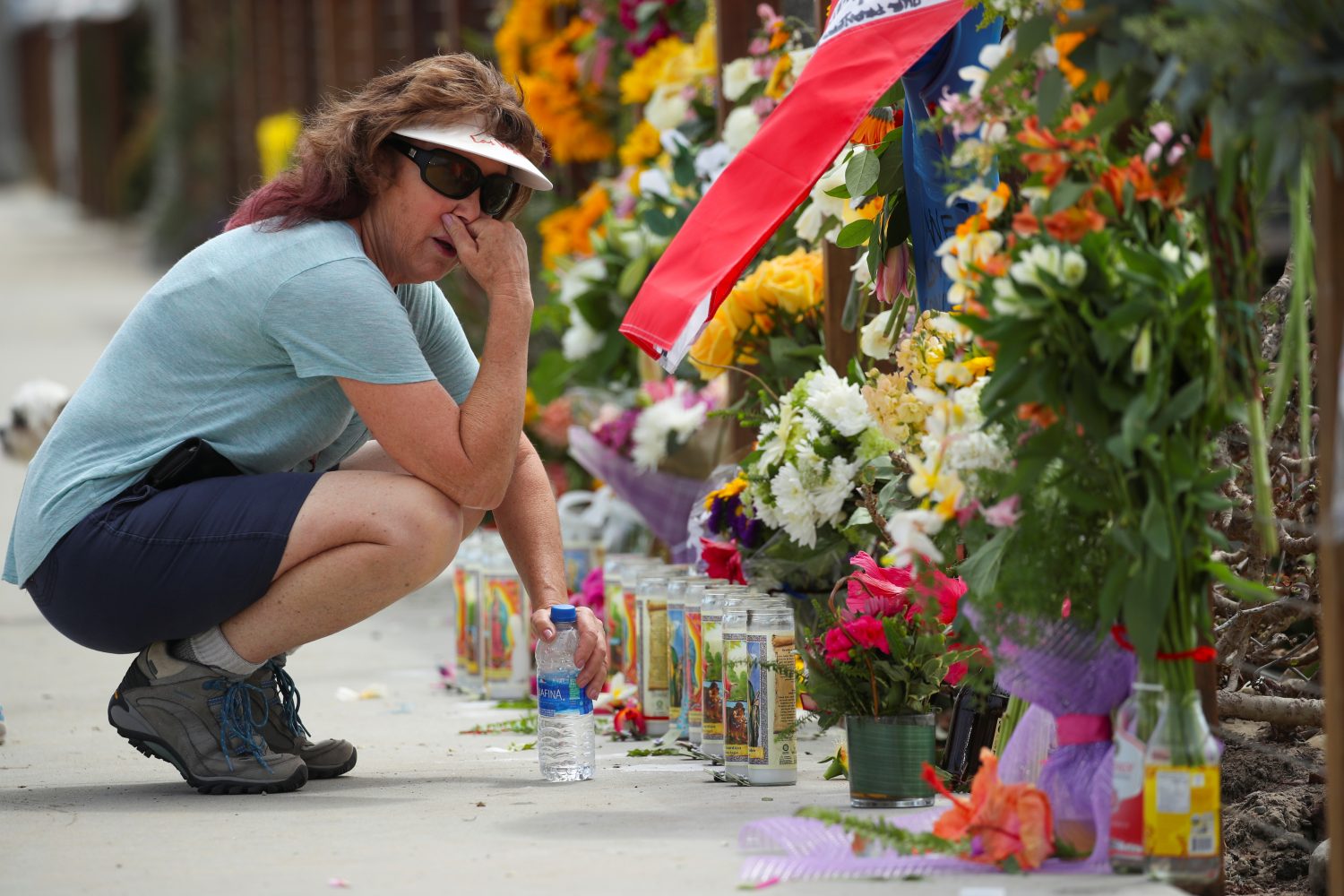 SANTA BARBARA, Calif. (Reuters) – Federal safety investigators on Tuesday promised an exhaustive probe into the fire that killed 34 people on a dive boat as many of the charred bodies remained trapped in the sunken wreckage off the California coast or missing in the ocean.

After recovering the remains of 20 people from the 75-foot (23-meter) Conception or from the waters where the dive ship sank off Santa Cruz Island, officials said they believed none of the 14 victims initially classified as missing had survived the fast-moving flames.

“There were several other victims that were seen by the divers – between four and six – that are still between the wreckage, but due to the position of the boat they were unable to be recovered before nightfall,” Santa Barbara County Sheriff Bill Brown told reporters.

“Today, efforts will be made to stabilize the boat so that divers can safely enter it, search it and recover additional victims,” he said.

The five survivors, including the boat’s captain and four crew members, were above deck when the blaze broke out at about 3:15 a.m. Pacific time and escaped in an inflatable boat. A crew member who perished was apparently sleeping below deck with the passengers at the time.

The investigators will collect all perishable evidence while on scene for at least a week, she said, but the Conception would remain on the ocean floor, more than 60 feet below the surface, until a site survey had been completed.

A few scant details about the victims, who ranged in age from 17 to 60, began to emerge as emergency workers planned to use DNA analysis to identify the remains of the 20 bodies recovered so far. Most of the victims were from the Santa Cruz and San Jose area, authorities said.

A memorial to the victims grew alongside a dock not far from where the ship was usually docked in Santa Barbara as members of the close-knit boating community reeling from the tragedy wove flowers into a wood and wire fence and constructed a makeshift memorial.

“It’s just such a horrific notion to think what the people down in the below decks, the people sleeping down there must have gone through,” said Judy Weisman, 72. “How terrifying.”

An audio recording of a desperate call made to the U.S. Coast Guard as flames engulfed the boat offered a glimpse into that terror as a man could be heard pleading for help.

“That’s a distress, this is the Coast Guard Sector Los Angeles on channel 1-6, what is your position … and number of persons on board? Over,” the dispatcher answered.

The dispatcher requested the GPS location of the vessel at least two more times but the caller apparently failed to respond. 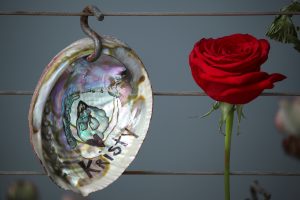 A name is written on a shell as it hangs on a makeshift memorial near Truth Aquatics as the search continues for those missing in a pre-dawn fire that sank a commercial diving boat near Santa Barbara, California, U.S., September 3, 2019. REUTERS/Mike Blake

Marine biologist Kristy Finstad, 41, was leading the dive trip on the Conception, according to her brother, Brett Harmeling. Finstad co-owned Worldwide Diving Adventures, which had chartered the boat for a three-day excursion to the Channel Islands.

“No final word on my sister Kristy; however it is likely she has transitioned to be with the good lord,” Harmeling said in a Facebook post on Tuesday.

A seashell inscribed with the name “Kristy” was hung on the wooden fence at the dock.