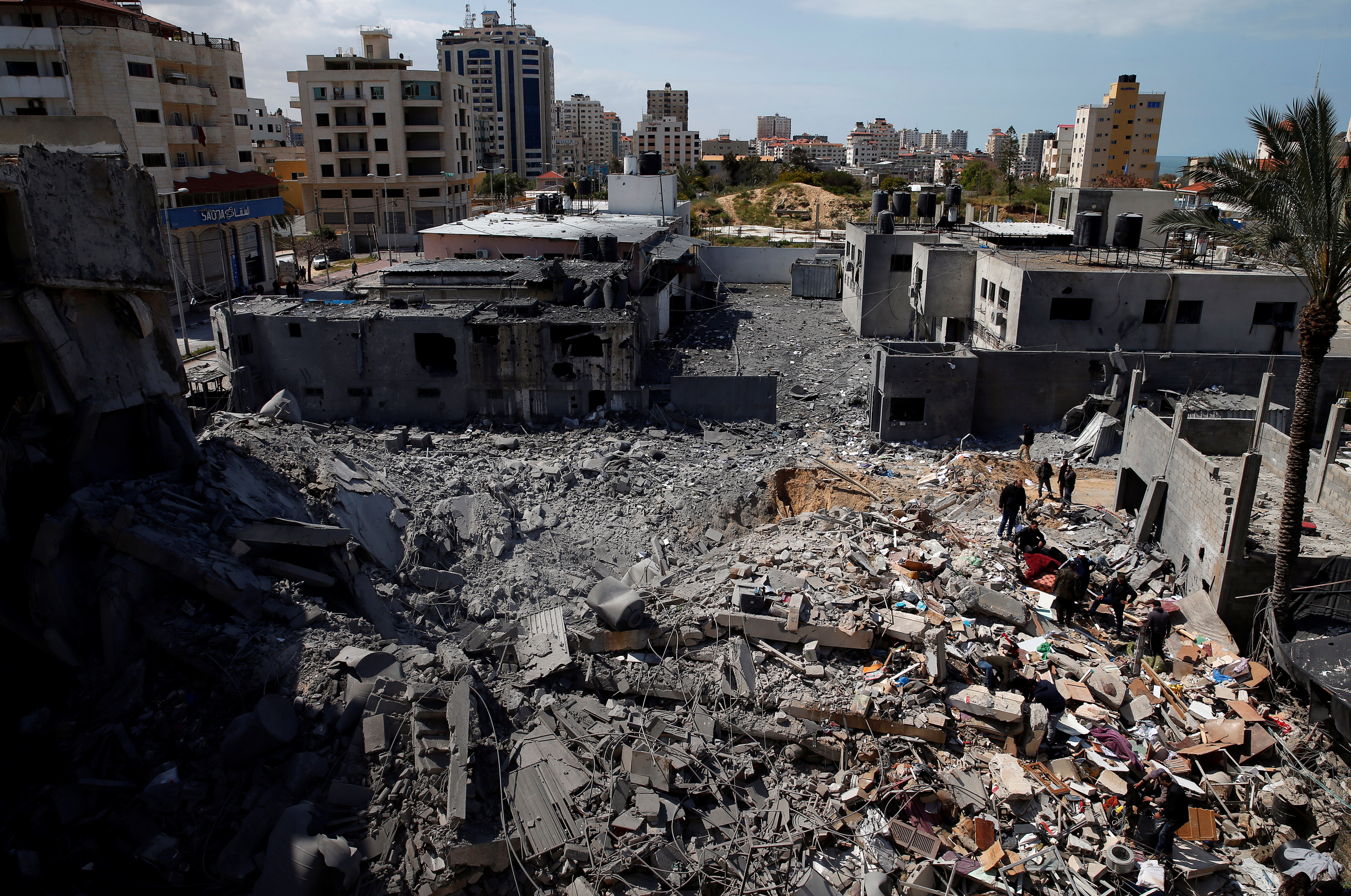 GAZA/JERUSALEM (Reuters) – Cross-border fighting between Israel and Hamas abated on Tuesday after a day of Palestinian rocket attacks and Israeli air strikes, but Israel said it reserved the right to strike again and kept its forces massed at the Gaza frontier.

The biggest Israeli-Palestinian escalation in months, which began on Monday with the longest-range Palestinian rocket attack to cause casualties in Israel for five years, appeared to have been curbed overnight by Egyptian mediation.

But even if brought to an end, the crisis could have an impact on an Israeli election in two weeks in which right-wing Prime Minister Benjamin Netanyahu is fighting for his political life, arguing that he must stay in power to keep Israelis safe.

Israel responded to Monday’s rocket attack with a wave of strikes on targets belonging to the Hamas militant group that controls the Gaza strip. Seven Israelis were injured in the initial rocket attack and five Palestinians were wounded by the retaliatory Israeli strikes, although most of the targets hit appeared to have been evacuated in advance.

A senior Israeli official on board the plane of Netanyahu — who flew home cutting short a visit to the United States to deal with the crisis — said Israel had not yet stood down.

“We are prepared to deliver another blow, if necessary,” Israeli Army Radio quoted the official as saying.

The border area fell quiet on Tuesday morning after Hamas said Egypt had brokered a truce. As in past escalations that ended with Egyptian mediation, Israel denied it had agreed to a ceasefire with Hamas, which it views as a terrorist group.

Rocket warning sirens, which had sounded in Israeli towns near the border on Monday night, fell silent by morning.

The escalation was the biggest since November between Israel and Hamas, which fought three wars between 2007 and 2014 and have come to the brink of all-out conflict several times since.

Security is a major issue as Netanyahu, in power for a decade, faces his strongest electoral challenge from a centrist coalition led by a top general. The right-wing leader is beset by corruption allegations which he denies. He argues that he has kept Israelis safe with a tough stance towards the Palestinians that could be weakened if he leaves office.

In Washington, he met U.S. President Donald Trump, who reversed decades of U.S. policy to sign a proclamation recognizing Israeli sovereignty over the Golan Heights, which Israel captured from Syria in the 1967 Middle East war.

Reporters who flew with Netanyahu quoted the senior Israeli official as saying Trump’s move was proof that Israel could retain land captured in a “defensive war”, an apparent suggestion of a permanent hold over other areas captured in 1967, such as parts of the West Bank.

The Israeli military blamed Hamas, the dominant armed group in Gaza, for Monday’s initial strike that destroyed a house in Mishmeret, a village north of Tel Aviv. It said the rocket had been launched from the enclave, some 120 km (70 miles) away.

Retaliatory Israeli air strikes in Gaza lit up the night sky and explosions rocked the densely-populated coastal enclave, destroying targets that included the office of Hamas leader Ismail Haniyeh. The military said extra Israeli soldiers and tanks had been moved to the border.

In the morning, with the bombing having stopped, Gazans picked through the rubble of destroyed buildings to search for valuables and documents. Some Gaza universities were shut but schools were open, although many families kept children home.

“We don&rsquo;t want war, but if Israel wants it then what should we do? We ask our factions to respond,” said Mohammad Sayed, 40. “But we hope Egypt reaches a deal to end this.”

Gaza militants fired barrages of rockets into Israel late into Monday night. Some were shot down by Israeli defenses and others landed in empty areas. Israel remained on high alert on Tuesday and ordered schools near the border closed and residents to stay near bomb shelters.

“I told my kids that everything is going to be all right and that it will be over. We trust the government will solve the problem,” Eliav Vanunu, whose house in the Israeli border town of Sderot was damaged by a rocket on Monday night, said on Israel Radio.

Gaza is home to 2 million Palestinians, mostly descendants of people who fled or were driven from homes in Israel on its founding in 1948.

Israel captured the territory in the 1967 war but pulled out its troops in 2005. Hamas took control two years later, and since then Israel and Egypt have maintained a security blockade that has brought Gaza’s economy to a state of collapse.

In the past year, nearly 200 Palestinians and one Israeli soldier have been killed during demonstrations near the border by Palestinians seeking a lifting of the blockade and the right to return to homes in Israel. Israel says it has no choice but to use deadly force to protect the frontier from militants.