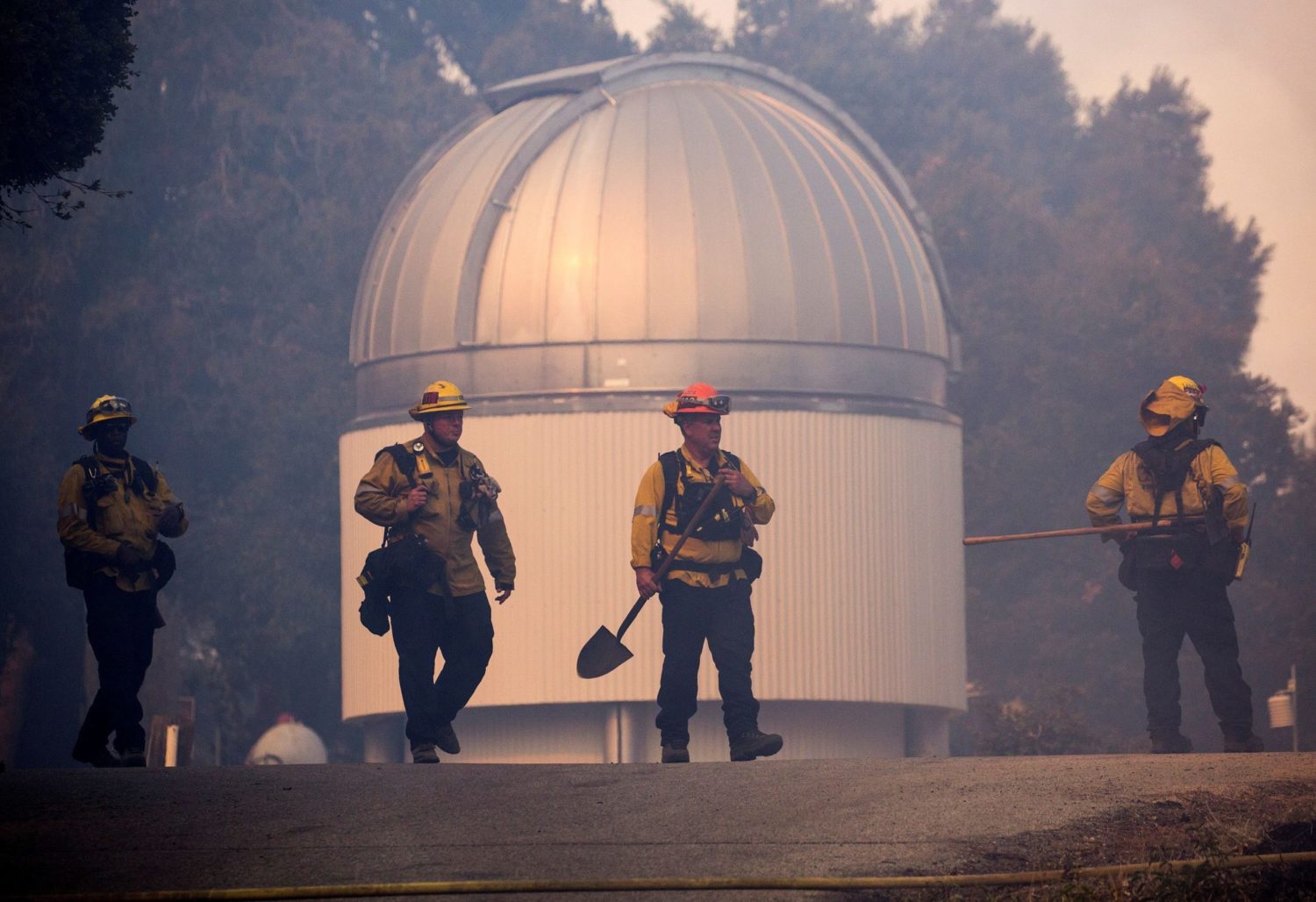 LOS ANGELES (Reuters) – Crews fought on Tuesday to defend homes and the famed Mount Wilson Observatory from California’s biggest and most dangerous wildfire, standing their ground at a major highway between the flames and populated areas.

The Bobcat Fire, which broke out Sept. 6 in the Angeles National Forest north of Los Angeles, has already blackened an area larger than the city of Atlanta and its rapid spread prompted worried law enforcement officials to call for new evacuations on Monday evening.

Once home to the largest operational telescope in the world, the Mount Wilson Observatory, which sits on a peak of the San Gabriel mountains near vital communications towers, said in an update that almost all the forest around it had burned.

Firefighters overnight kept the Bobcat from breaching containment lines near the observatory and were preventively burning vegetation ahead of the fire along state Highway 2, which runs northeast from Los Angeles.

This summer California already has seen more land charred by wildfires than in any previous full year, with some 3.4 million acres burned since mid-August.

The fires, stoked by extreme weather conditions that some scientists call evidence of climate change, have destroyed some 6,100 homes and other structures and killed 26 people, three of them firefighters.

Another 2 million acres have burned in Oregon and Washington during an outbreak of wildfires, destroying more than 4,400 structures and claiming 10 lives. But rain showers across the western Cascade mountain range helped fire crews in the Pacific Northwest gain control of those conflagrations.

Although California has seen little rain in September, bouts of high temperatures and gale-force winds have given way in recent days to cooler weather, enabling firefighters to gain ground.

But forecasters predict rising temperatures, lower humidity and a return of strong, erratic winds around midweek in Southern California and by the weekend across the state’s northern half, lending urgency to the firefight.

The Bobcat Fire has now scorched more than 109,000 acres to become one of the largest wildfires in recorded Los Angeles County history and was only 17% contained on Tuesday afternoon.

The flames came perilously close to the Mount Wilson Observatory last week before they were driven back by crews using air support.

Several more areas, including Pasadena, a city of 140,000 people, remained under evacuation warnings.

California’s fire season historically has run through October. Five of the state’s 20 largest blazes on record have occurred this year. 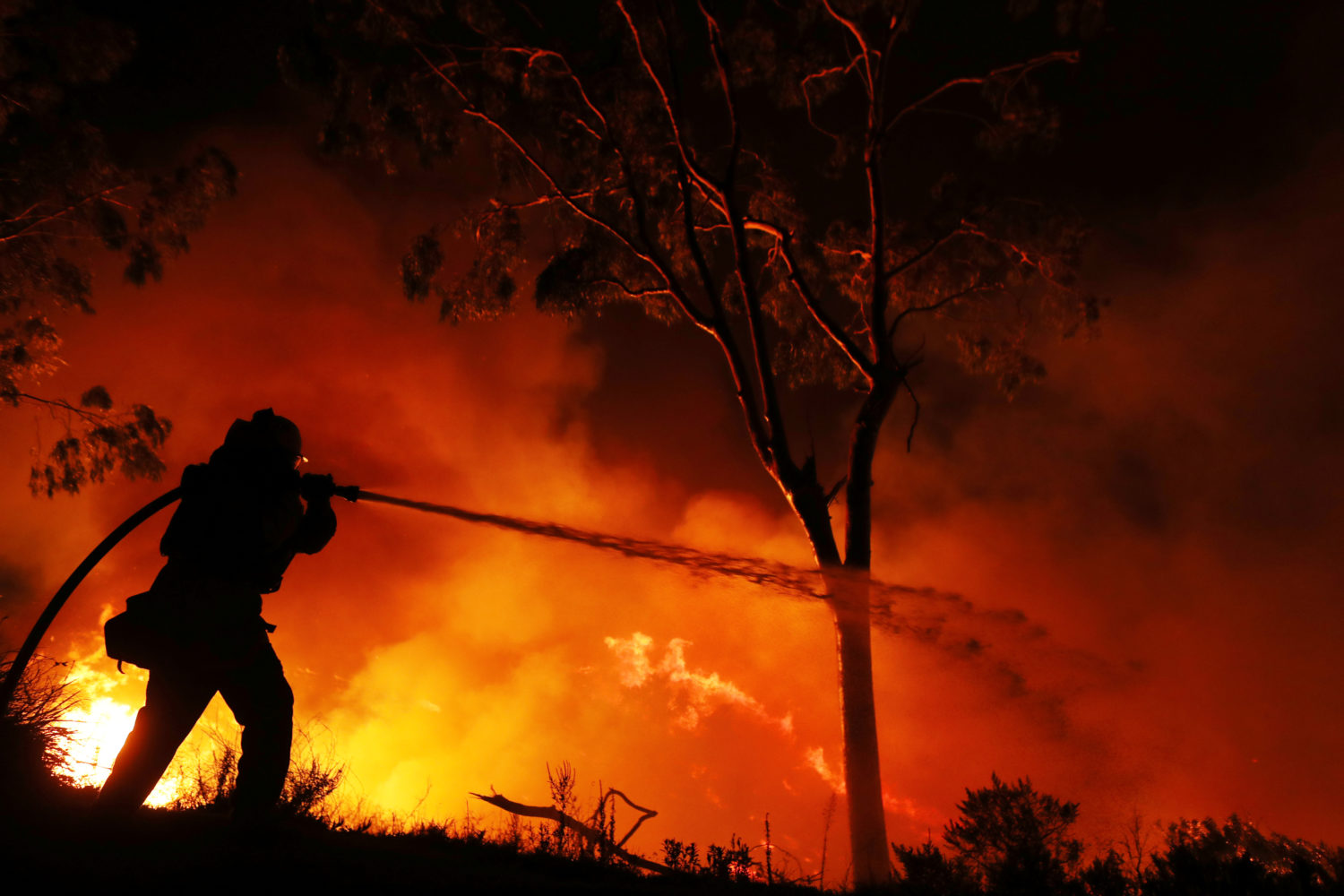 SANTA ROSA, Ca. (Reuters) – The coronavirus pandemic has forced California officials to rethink how they train for and fight wildfires to avoid spreading the virus among firefighters and the public.

In Sonoma County north of San Francisco, firefighters now receive training at the station level to maintain social distancing instead of coming together in large groups at their St. Helena headquarters.

When it comes to fighting fires, the big changes will be seen at incident command posts, which can bring together thousands of firefighters, according to Ben Nicholls the county’s division chief for the California Department of Forestry and Fire Protection (CalFire).

Briefings will likely be done via radio or video feed rather than in-person to avoid spreading the virus. Meal shifts will be staggered to avoid shoulder-to-shoulder contact among firefighters. Base facilities will have to be larger to house firefighters coming in from out of state to maintain social distancing, Nicholls said.

“COVID-19 has definitely thrown us a curve ball,” Nicholls said in an interview.

In California, as in the rest of the United States, the 2020 fire year has seen more and larger fires than in 2019 but the acreage burned remains below the 10-year average, according to data from CalFire and the National Interagency Fire Center.

There is a higher chance this year in California of earlier offshore winds that have in the past fanned the state’s largest and deadliest blazes, Nicholls said, adding they have not appeared.

One issue that remains uncertain for California firefighters is their budget. With California’s tax revenue deeply impacted by the pandemic, Nicholls said CalFire will be affected as well.

“At this point, it appears that we will see some sort of reduction. We just don’t know what that will look like,” Nicholls said. 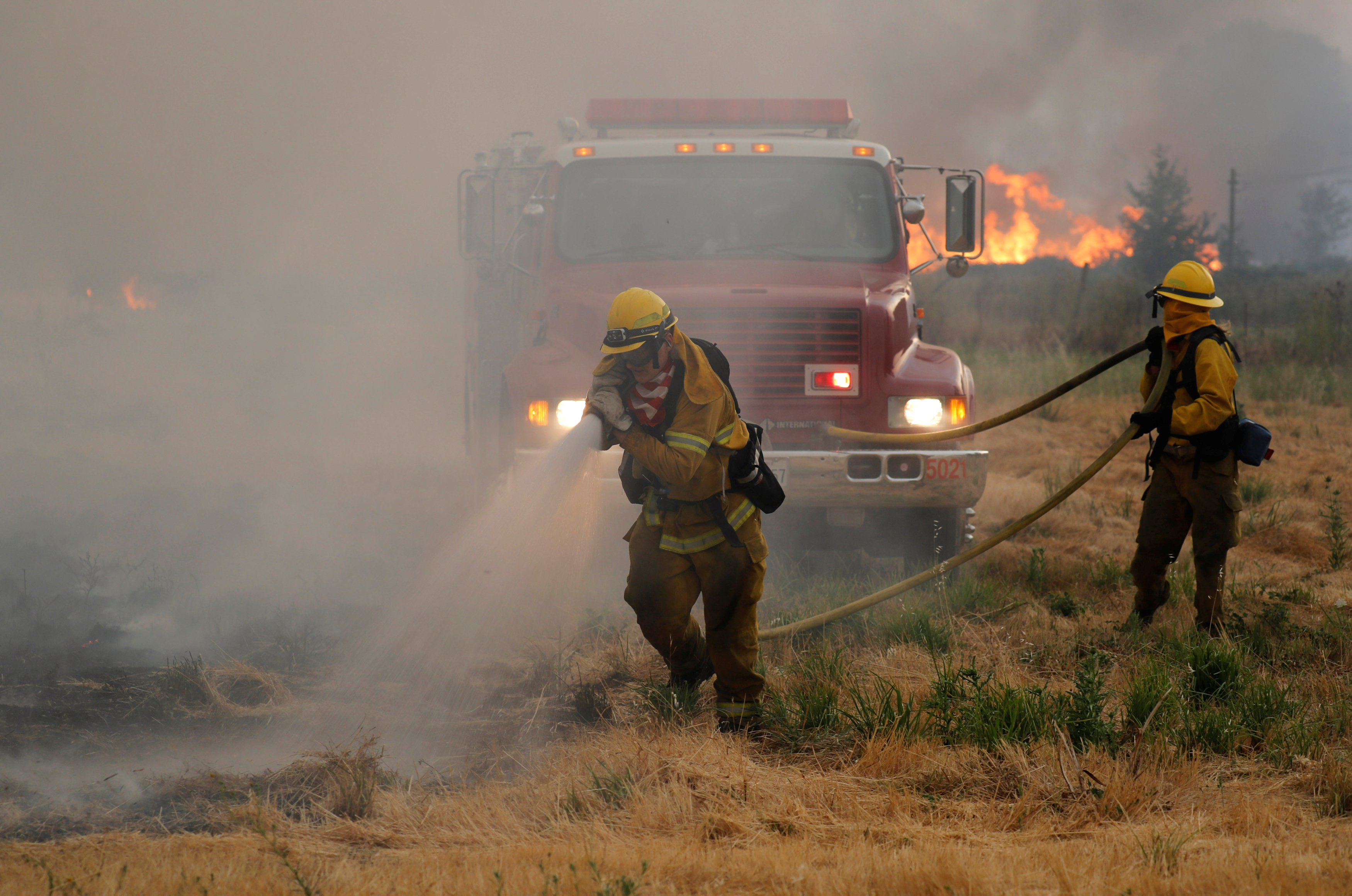 REDDING, Calif. (Reuters) – Weary firefighters in Northern California were outflanking a deadly, 10-day-old blaze on Wednesday that has destroyed over 1,000 homes as authorities reopened more evacuated neighborhoods and the last few people listed as missing were found alive.

Aided for a third straight day by diminished winds, ground crews extended buffer lines carved out of thick, dry brush along the fire’s edge to 35 percent of its perimeter, with partial containment lines continuing even farther, officials said. 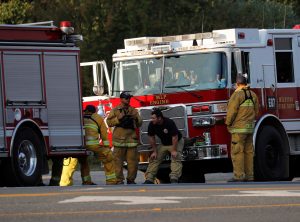 That marked a substantial improvement from the weekend, when the Carr Fire raged mostly unchecked after laying waste to neighborhoods in and around Redding, a city of 90,000 people about 160 miles (257 km) north of the state capital, Sacramento.

Having scorched more than 121,000 acres (48,967 hectares), an area larger than New Orleans, the blaze was the biggest of 16 major wildfires burning throughout California and the most formidable of more than 90 across 13 Western states from Texas to Alaska.

California Department of Forestry and Fire Protection (CalFire) commanders said the Carr Fire, sparked by a vehicle on July 23, was burning with far less intensity this week and posed little immediate threat to populated areas.

“We are making good progress on the fire,” CalFire Deputy Chief Bret Gouvea told reporters at a mostly upbeat news briefing in Redding. Crews “still have quite a bit of work to do” to shore up containment lines, he said.

A status update issued hours later said a “fire weather watch” would go into effect for Thursday evening through Saturday, with increasing winds in the forecast.

Strong gusts kicking up along the upper ridgelines on Wednesday night were a cause for concern on the fire’s rugged western flanks, a few miles from the town of Lewiston, which remained evacuated.

Elsewhere, fire authorities, utility crews, and police were stepping up efforts to remove hazards such as downed power lines and ruptured gas lines to allow evacuees to return as quickly as possible to areas no longer threatened.

“Repopulation is the theme,” Gouvea said. 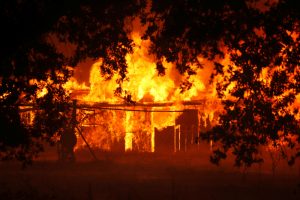 A structure burns out of control in the River Fire (Mendocino Complex) in Lakeport, California, U.S. July 31, 2018. REUTERS/Fred Greaves

Redding Police Chief Roger Moore, who lost his own home in the fire, said social workers and clergy would be on hand to lend support to distressed residents.

“We recognize that as people enter back into their neighborhoods, they’re going to know people, family members and neighbors that have lost homes,” Moore said. “It’s a very emotional period. It takes a toll on people.”

As many as 38,000 residents were under evacuation orders at the height of the fire late last week. CalFire director Ken Pimlott said more than 32,000 remained displaced by various fires up and down the state.

In another sign the crisis in Redding was ebbing, law enforcement officials said the last four people reported as missing among a list of 20 whose names were published on Tuesday were located safe and sound on Wednesday.

Six people were killed in the Carr Fire, including two firefighters, two children who perished with their grandmother in a house that burned, and a man who defied an evacuation order to stay put in another home that was consumed by the fire.

Property losses so far have been put at 1,546 structures, including 1,0580 homes, making the Carr Fire the sixth most destructive in California’s history.

Most of the devastation occurred on the night of July 26, when gale-force winds whipped the blaze into a flaming cyclone that jumped the Sacramento River and roared with little warning into Redding and adjacent towns in the scenic Shasta-Trinity region.

The inferno swiftly engulfed everything in its path as residents fled for their lives, many with only their pets and a few belongings.

Fire officials said such blazes had been fueled by several years of drought-desiccated vegetation and stoked by frequent and persistent bouts of erratic winds and triple-digit temperatures. Brown said the trend would likely worsen if forecasts by climate scientists come to pass.