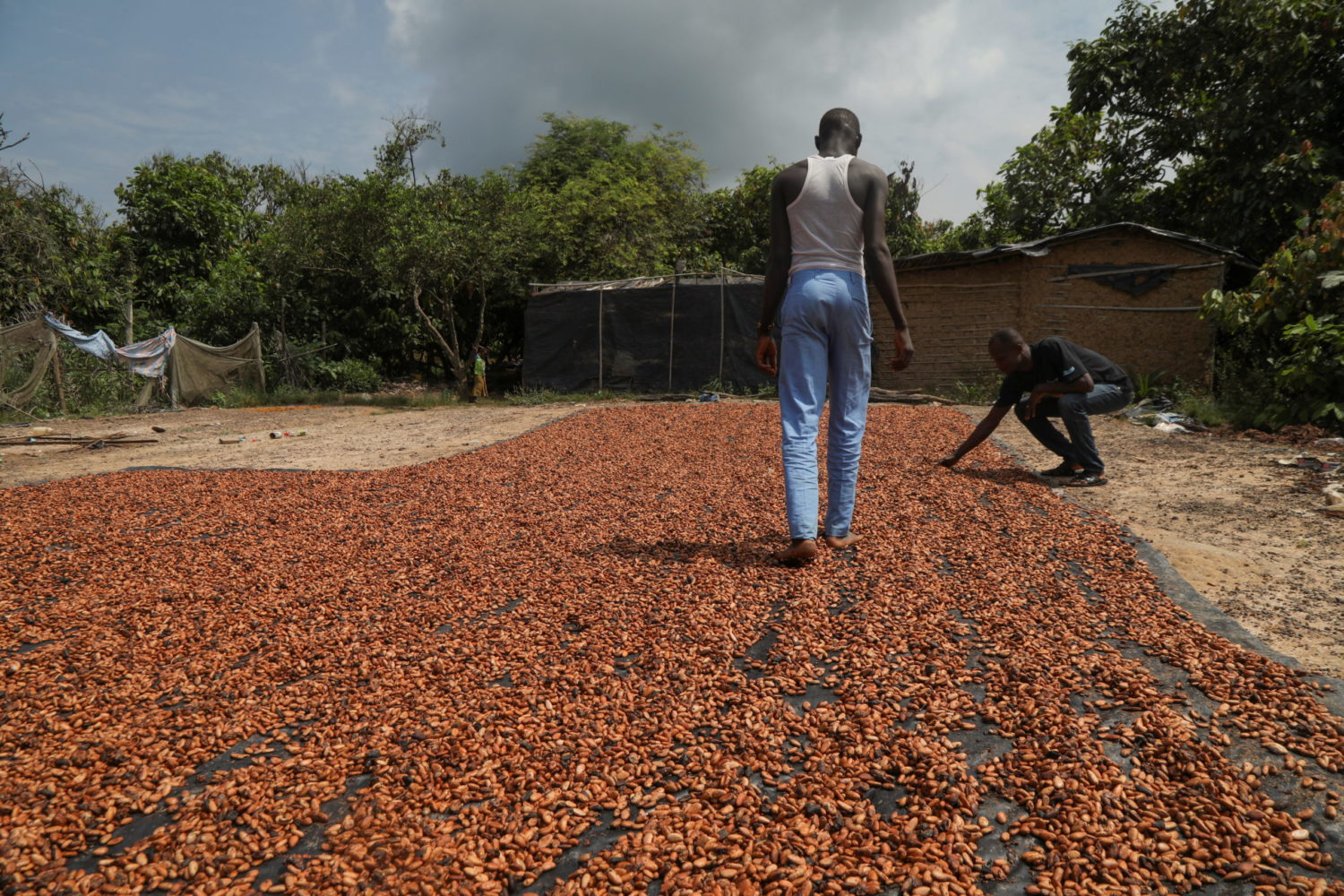 DJIGBADJI, Ivory Coast (Reuters) -This cocoa-growing settlement was all but destroyed last year by Ivorian forest agents, leaving farmers to rake through their beans amid broken concrete and other remnants.

“They set the whole village on fire,” said Alexis Kouassi Akpoue, describing the day in January 2020 when the agents raided the settlement in Rapides Grah, a protected forest, where he had illicitly planted cocoa with thousands of other farmers. “The next morning at 5 o’clock they sent in the bulldozers.”

Yet when Reuters returned to the village a year later, business was again thriving. Farmers dried and bagged beans among the demolished buildings as buyers hunted for quality cocoa, much of it destined for use in chocolate bars and candies made in Europe.

The government of Ivory Coast, the world’s top cocoa-growing country, has been cracking down on cultivators after decades of intensive and often illicit farming decimated its tropical forests. Leading chocolate and cocoa companies are meanwhile monitoring their own supply chains for illicitly grown cocoa.

That’s one reason the bloc’s executive arm, the European Commission, proposed legislation on Wednesday that would compel companies to find and fix environmental and human rights risks in their international supply chains – or face penalties. Companies would be restricted from sourcing beans grown on land deforested after a certain date, which is to be set by the law.

“Voluntary initiatives by companies to stop deforestation have largely failed,” said EU Parliament member Delara Burkhardt. Though not finalized, the legislation is expected to pass in some form as soon as 2023.

Chocolate and cocoa companies say they support the new regulations but dispute that their efforts have failed. They told Reuters their supply chain monitoring systems, including GPS mapping, satellite surveillance and third-party certification, give them assurance that the beans they source do not come from the Rapides Grah forest or other illegal farming operations.

However, the sector’s leading cocoa certification body has acknowledged that thousands of farms in protected areas received its stamp of approval in error.

In addition, purchasing documents and interviews with farmers and farmer cooperatives suggest that co-ops serving some of the chocolate industry’s biggest players – including Nestle, Mars Inc, Cargill Inc and Touton S.A. – source at least a portion of their beans from protected forests.

Reuters did not trace specific shipments of illicitly farmed cocoa to the companies. In separate statements, Cargill, Mars and Nestle said they had not knowingly purchased illegally grown cocoa. Touton did not respond to Reuters’ requests for comment.

Tracing the origin of cocoa beans is extremely difficult, in part because co-ops regularly buy from growers who are not members. Ivory Coast’s Ministry of Water and Forests estimates 20% to 30% of the roughly 2 million tonnes of cocoa produced annually is grown illegally and that practically all those beans enter the global supply chain.

“We want that to stop,” said Water and Forests Minister Alain-Richard Donwahi.

The Ivorian government faults locals for the problem but contends multinational corporations continue to profit from deforestation and have a duty to help forests recover.

In 2017, Ivory Coast and neighboring Ghana, the world’s No. 2 cocoa producer, teamed up with dozens of companies under an initiative aimed at eliminating deforestation. A study by the University of Maryland found the two African countries reduced the rate of primary forest loss by over 50% in 2019 compared to the previous year.

Pilot-phase reforestation efforts, which include eliminating illegal settlements in the Rapides Grah forest, point to a tough road ahead for the government and farmers. Most growers are immigrants living below the United Nations poverty line of $1.90 a day.

Over the years, the 10,000 or so residents of Djigbadji – commonly known as Bandikro, or Bandit Town – chopped down the towering canopy. The 315,000-hectare forest is today covered in cocoa plantations, most of them illegal.

The proposed legislation by the EU Commission would prohibit companies that sell products in the EU from sourcing beans grown in officially protected forests like Rapides Grah, no matter when they were cleared.

Separately, under the Ivorian government’s plan to double the country’s forested area, farmers who help with reforestation can stay and maintain existing cocoa plantations for 10 to 15 years, until their trees die off.

“Listen, we have the national interest in mind,” Lt. Olivier Nogbo of SODEFOR, who is in charge of Rapides Grah’s northern half, told Reuters during an armed patrol last year, with his handful of agents dressed in camouflage and carrying AK47s.

“It’s not for 10,000 people that we’re going to allow the environment to be destroyed.”

SIGNS AMID THE RUBBLE

During an initial visit to Bandikro weeks after the January 2020 raid, Reuters scoured the remains of half a dozen demolished co-op purchasing outposts that store cocoa. It found remnants of a thriving buying hub as well as possible indications of who was purchasing the illicit beans.

At one bulldozed outpost, Reuters found a receipt book along with the sign that once hung above the door, both bearing the name of the farmer cooperative SCAES COOP-CA.

SCAES is part of the in-house sustainability programs run by Cargill and Touton, two of the world’s largest agricultural commodities traders. The companies say the programs aim to ensure their practices do not harm people or the planet. Cargill sells SCAES’ cocoa to Nestle, according to Nestle’s supply-chain disclosures on its website.

Jean-Robert Gnanago, a SCAES director and head office employee at the co-op’s headquarters in Meagui, told Reuters the co-op sold cocoa to various industry majors, including around 5,000 tonnes a year to Cargill, but denied it purchased beans inside Rapides Grah.

“If someone used our sign somewhere, that’s possible,” Gnanago said. “But we aren’t aware of it.”

In a statement, the chairman of SCAES’s board of directors, Souleymane Coulibaly, said the co-op does not buy cocoa from protected land and that it stopped sourcing from buyers who operate near high-risk areas in 2015. The statement added that the cocoa purchase receipts Reuters discovered in Bandikro predate SCAES’s move out of high-risk areas.

Cargill and Nestle did not directly address Reuters inquiries about the SCAES receipt book and sign.

Many co-ops that once operated inside Bandikro have since the January 2020 raid simply moved their purchasing outposts just outside the Rapides Grah boundary, Reuters found. But “eighty percent of the product comes from here,” said Bandikro village leader Francis Bogui, referring to the protected forest.

SOCAGNIPI is listed as a supplier by U.S. confectionary giant Mars, maker of M&Ms and Snickers. The co-op participates in Mars’ in-house sustainability program.

In its statement to Reuters, Mars did not address questions about SOCAGNIPI. Employees at SOCAGNIPI’S main office, in an Ivory Coast town called Gnipi 2, declined to speak to Reuters.

The co-ops named in this article were audited by independent third parties such as UTZ, a Dutch nonprofit that certifies sustainable agriculture. Auditors’ labels indicate a product has been certified as free from human rights and environmental abuses such as deforestation and child labor.

UTZ used a subcontractor called Bureau Veritas to audit SCAES in 2019. Later that year, UTZ reprimanded Bureau Veritas for poor performance. In a statement to Reuters, Rainforest Alliance, which merged with UTZ in 2018, said the reason for the reprimand is confidential.

Mars, Nestle and Cargill said they use GPS technology to map farms belonging to cooperatives with which they partner, making sure their boundaries don’t overlap with protected areas. Cargill said it monitors those farms via satellites that alert it in real time to forest loss.

In separate statements, Cargill and Nestle said they source beans from SCAES COOP-CA and that the co-op participates in their in-house sustainability programs. Cargill said audits of the co-op had not found evidence it buys from protected land.

Mars and Cargill both said they have yield estimates for farms belonging to co-ops in their sustainability programs. If yields are high compared to estimates, this can result in supply-chain audits.

Cargill and Nestle said the co-ops with which they partner also tag and bar-code the sacks of beans they get from individual farmers.

This “gives us greater assurance that beans come from known and mapped farms,” Cargill said.

(Reporting by Joe Bavier and Ange Aboa in Djigbadji, Ivory Coast, and Maytaal Angel in London. Editing by Julie Marquis and Alexandra Zavis)