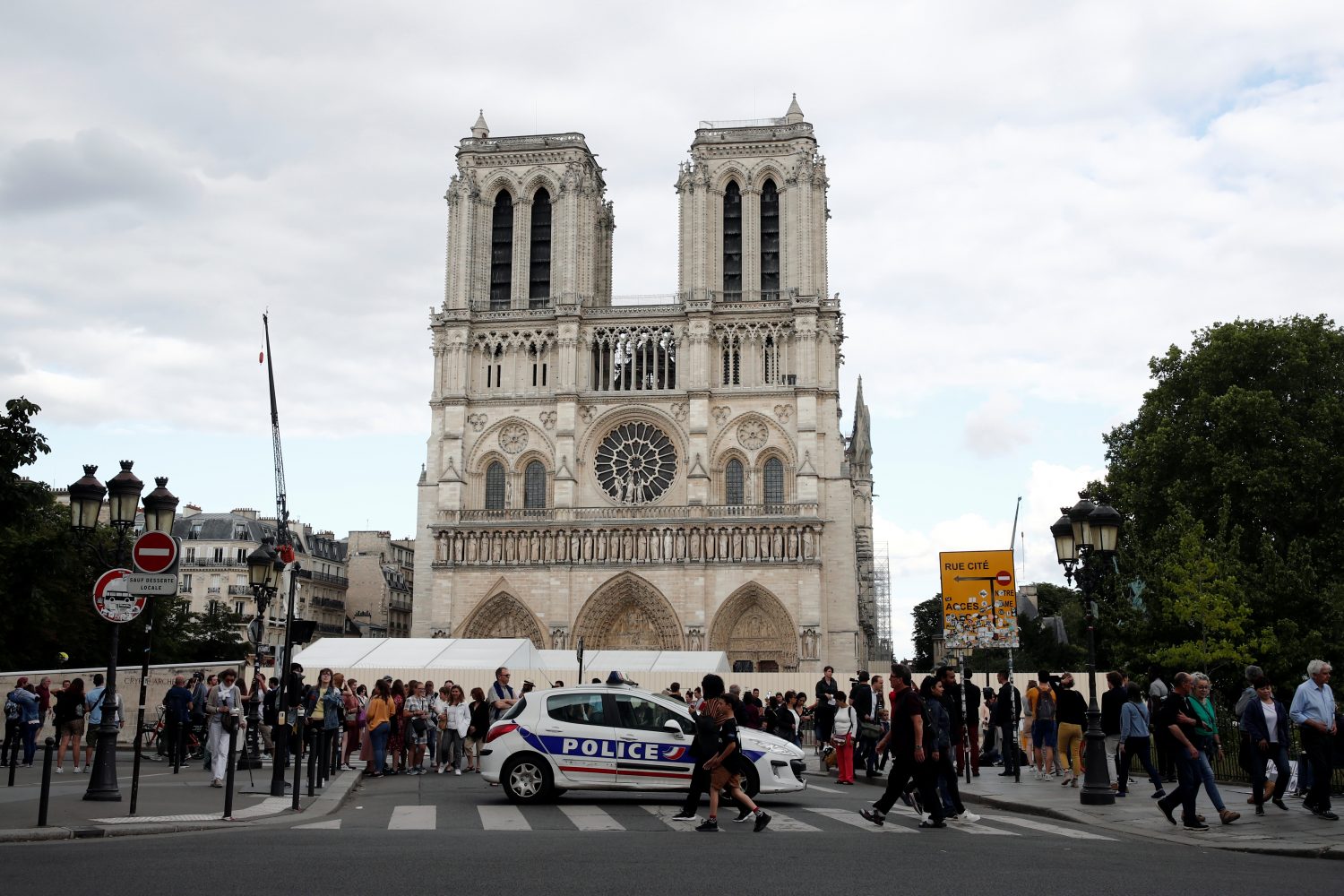 PARIS (Reuters) – An electrical fault or a burning cigarette may have been responsible for the fire that gutted Notre-Dame Cathedral, French authorities investigating the cause of April’s blaze said on Wednesday.

Paris prosecutors said that, while they were investigating the possibility of negligence, they currently had no reason to believe the fire was started deliberately.

It ripped through the medieval cathedral on April 15, destroying the roof, toppling the spire and almost bringing down the main bell towers and outer walls before firefighters brought it under control.

“If certain failings, which may explain the scale of the fire, have been brought to light, the investigations carried out to this date have not yet been able to determine the causes of the fire,” said a statement from Paris prosecutor Remy Heitz.

“For now, there are no indications of a criminal origin,” he added. However, nothing had been ruled out, with an electrical fault and a cigarette that was not properly extinguished two of several possible causes being investigated, he said.

President Emmanuel Macron has set a target of five years for restoring Notre-Dame, which dates back to the 12th century and is one of Europe’s most iconic landmarks. 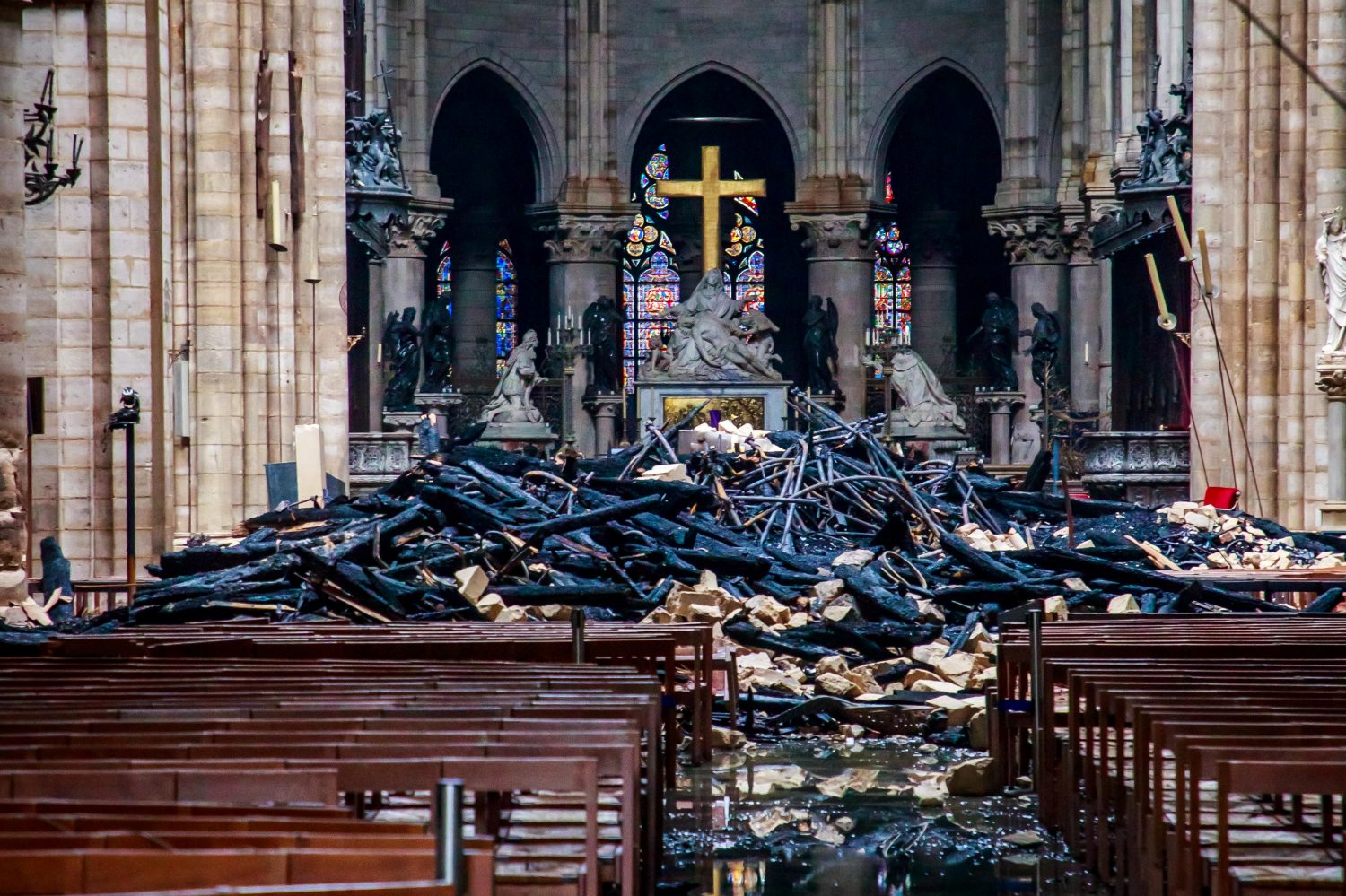 PARIS (Reuters) – The fire that tore through Notre-Dame cathedral was probably caused by accident, French prosecutors said on Tuesday after firefighters doused the last flames in the ruins overnight and the nation grieved for the destruction of one of its symbols. 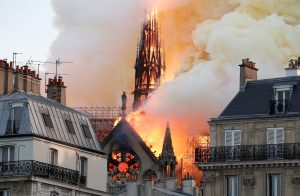 More than 400 firemen were needed to tame the inferno that consumed the roof and collapsed the spire of the eight-centuries-old cathedral. They worked through the night to extinguish the fire some 14 hours after it began.

Paris public prosecutor Remy Heitz said there was no obvious indication the fire was arson. Fifty people were working on what would be a long and complex investigation. One firefighter was injured but no one else was hurt in the blaze which began after the building was closed to the public for the evening. 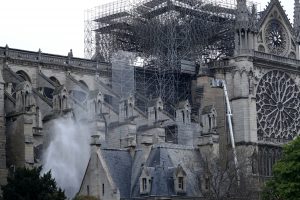 Firefighters work at Notre-Dame Cathedral in Paris, France April 16, 2019. A massive fire consumed the cathedral on Monday, gutting its roof and stunning France and the world. REUTERS/Yves Herman

From the outside, the imposing bell towers and outer walls, with their vast flying buttresses, still stood firm, but the insides and the upper structure were eviscerated by the blaze.

Firefighters examined the gothic facade and could be seen walking atop the belfries as police kept the area in lockdown.

Investigators will not be able to enter the cathedral’s blackened nave until experts are satisfied its stone walls withstood the heat and the building is structurally sound.

The fire swiftly ripped through the cathedral’s timbered roof supports, where workmen had been carrying out extensive renovations to the spire’s wooden frame.

The Paris prosecutor has opened an investigation into “involuntary destruction by fire”. Police on Tuesday began questioning the workers involved in the restoration, the prosecutor’s office said. 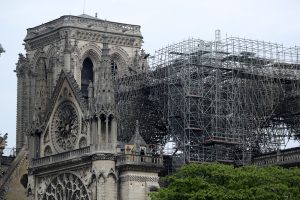 View of Notre-Dame Cathedral after a fire devastated large parts of the gothic gem in Paris, France April 16, 2019. A massive fire consumed the cathedral on Monday, gutting its roof and stunning France and the world. REUTERS/Yves Herman

Hundreds of stunned onlookers had lined the banks of the Seine river late into the night as the fire raged, reciting prayers and singing liturgical music in harmony as they stood in vigil.

“Yesterday we thought the whole cathedral would collapse. Yet this morning she is still standing, valiant, despite everything. It is a sign of hope,” said Sister Marie Aimee, a nun who had hurried to a nearby church to pray as the fire spread.

It was at Notre-Dame that Napoleon was made emperor in 1804, Pope Pius X beatified Joan of Arc in 1909 and former presidents Charles de Gaulle and Francois Mitterrand were mourned. 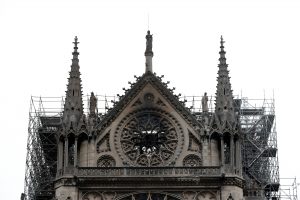 View of Notre-Dame Cathedral after a fire devastated large parts of the gothic gem in Paris, France, April 16, 2019. A massive fire consumed the cathedral on Monday, gutting its roof and stunning France and the world. REUTERS/Benoit Tessier

Notre-Dame is owned by the state. It has been at the center of a years-long row between the nation and the Paris archdiocese over who should finance badly needed restoration work to collapsed balustrades, crumbling gargoyles and cracked facades.

It was too early to estimate the cost of the damage, said the heritage charity Fondation du Patrimoine, but it is likely to run into the hundreds of millions of dollars.

Paolo Violini, a restoration specialist for Vatican museums, said the pace at which the fire spread through the cathedral had been stunning.

Officials breathed a sigh of relief that many relics and artworks had been saved. At one point, firefighters, policemen, and municipal workers formed a human chain to remove the treasures, including a centuries-old crown of thorns made from reeds and gold, and the tunic believed to have been worn by Saint Louis, the 13th-century king of France.

“Notre-Dame was our sister, it is so sad, we are all mourning,” said Parisian Olivier Lebib. “I have lived with her for 40 years. Thank God that the stone structure has withstood the fire.” 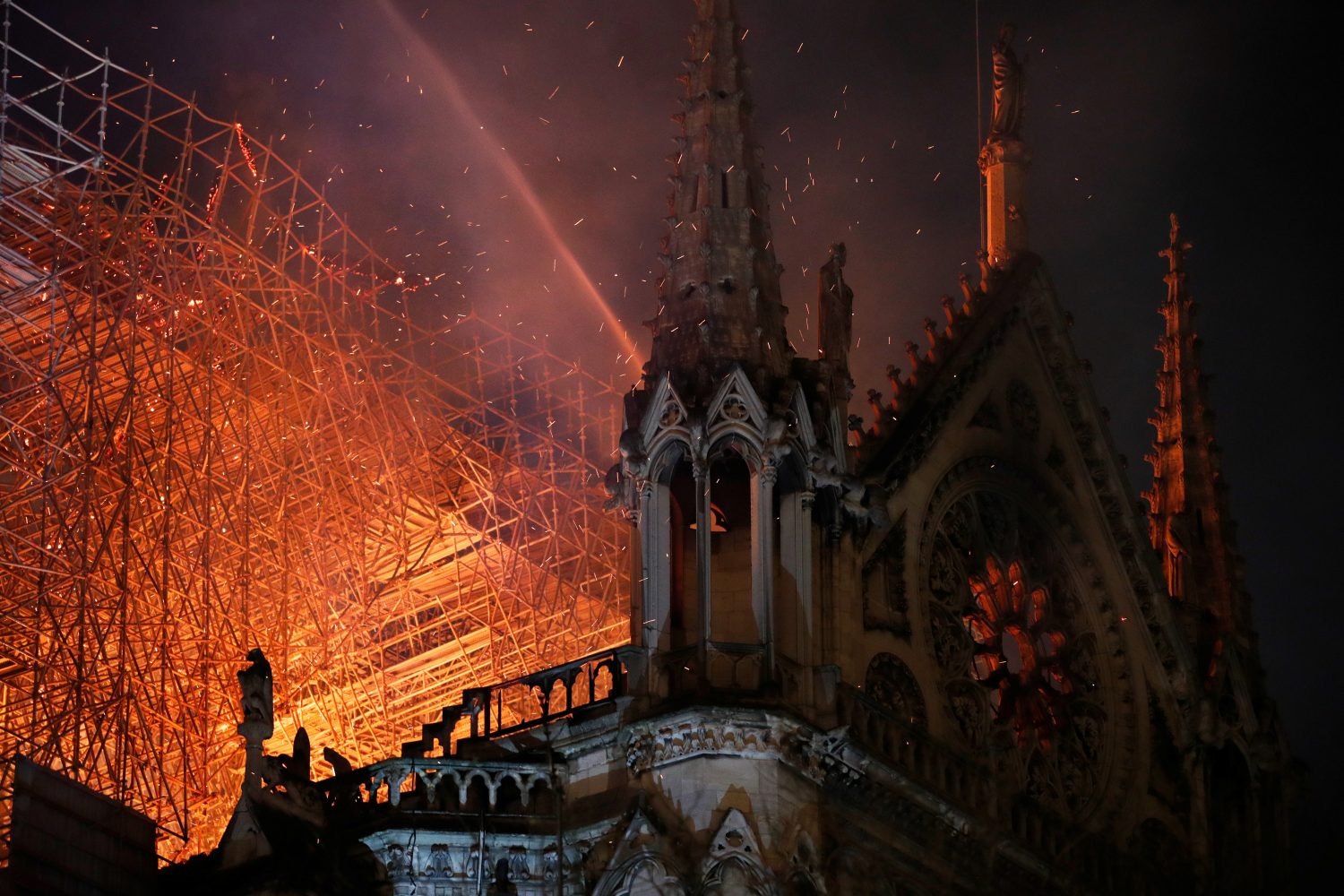 PARIS (Reuters) – A massive fire consumed Notre-Dame Cathedral on Monday, destroying the roof of the historic Paris landmark in a roaring blaze as firefighters battled to prevent one of the main bell towers from collapsing.

Flames that began in the early evening burst rapidly through the roof of the centuries-old cathedral and engulfed the spire, which toppled, quickly followed by the entire roof.

Distraught Parisians and stunned tourists gazed in disbelief as the inferno raged. Thousands of onlookers lined bridges over the River Seine and along its embankments, held at a distance by a police cordon.

“We’re not certain yet that we’ll be able to stop the fire from spreading to the northern belfry,” a firefighting official told reporters.

World leaders expressed shock and sent condolences to the French people. President Emmanuel Macron said the whole nation was distressed. “Like all our compatriots, I am sad this evening to see this part of all of us burn,” he tweeted.

A huge plume of smoke wafted across the city and ash fell over a large area. People watching gasped as the spire folded over onto itself and fell into the inferno.

At around 1930 GMT, nearly three hours after the fire started, a Fire Department spokesman said the next 90 minutes would be crucial in seeing if the blaze could be contained.

“Basically the whole rooftop is gone. I see no hope for the building,” said witness Jacek Poltorak, watching the fire from a fifth-floor balcony two blocks from the southern facade of the cathedral, one of France’s most visited sites.

Firefighters tried to contain the blaze with water hoses and cleared the area around Notre-Dame, which sits on an island in the River Seine and marks the very center of Paris. Witnesses said the whole island, the Ile de la Cite, was being evacuated.

Nobody was injured, junior interior minister Laurent Nunez said at the scene, adding: “It’s too early to determine the causes of the fire.”

The Paris prosecutor’s office said it had launched an inquiry into the fire. Several police sources said that they were working on the assumption for now that the fire was accidental.

“Everything is collapsing,” a police officer near the scene said as the cathedral continued to burn.

Macron, who cancelled an address to the nation that he had been due to give on Monday evening, went to the scene of the blaze and talked to officials trying to contain it.

The French Civil Security service, possibly responding to U.S. President Donald Trump’s suggestion that firefighters “act quickly” and employ flying water tankers, said that was not an option as it might destroy the entire building.

“Helicopter or plane, the weight of the water and the intensity of dropping it at low altitude could weaken the structure of Notre-Dame and cause collateral damage to surrounding buildings,” it tweeted.

German Chancellor Angela Merkel called the cathedral a “symbol of France and our European culture”. British Prime Minister Theresa May said her thoughts were with the French people and emergency services fighting the “terrible blaze”.

The Vatican said the fire at the “symbol of Christianity in France and in the world” had caused shock and sadness and said it was praying for the firefighters.

The mayor of Paris, Anne Hidalgo, said at the scene that some of many artworks that were in the cathedral had been taken out and were being put in safe storage.

The cathedral, which dates back to the 12th century, features in Victor Hugo’s classic novel “The Hunchback of Notre-Dame”. It is a UNESCO World Heritage site that attracts millions of tourists every year.

It is a focal point for French Roman Catholics who like Christians around the world are celebrating Holy Week, marking the death and resurrection of Jesus.

The archbishop of Paris called on all priests in Paris to ring church bells as a gesture of solidarity for Notre-Dame.

“I have a lot of friends who live abroad and every time they come I tell them to go to Notre-Dame,” said witness Samantha Silva, with tears in her eyes.

“I’ve visited it so many times, but it will never be the same. It’s a real symbol of Paris.”

The cathedral was in the midst of renovations, with some sections under scaffolding, and bronze statues were removed last week for works.

Built over a century starting in 1163, Notre-Dame is considered to be among the finest examples of French Gothic cathedral architecture.

It is renowned for its rib vaulting, flying buttresses and stunning stained glass windows, as well as its many carved stone gargoyles.

Its 100-metre-long (330-foot) roof, of which a large section was consumed in the first hour of the blaze, was one of the oldest such structures in Paris, according to the cathedral&rsquo;s website.

A center of Roman Catholic faith, over the centuries Notre-Dame has also been a target of political upheaval.

It was ransacked by rioting Protestant Huguenots in the 16th century, pillaged again during the French Revolution of the 1790s and left in a state of semi-neglect. Hugo’s 1831 work led to revived interest in the cathedral and a major “partly botched” restoration that began in 1844.

The wood-and-lead spire was built during that restoration, according to the cathedral’s website.

“Notre-Dame belonged to all humanity. What a tragic spectacle,” tweeted Jean-Claude Juncker, president of the European Union’s executive Commission.