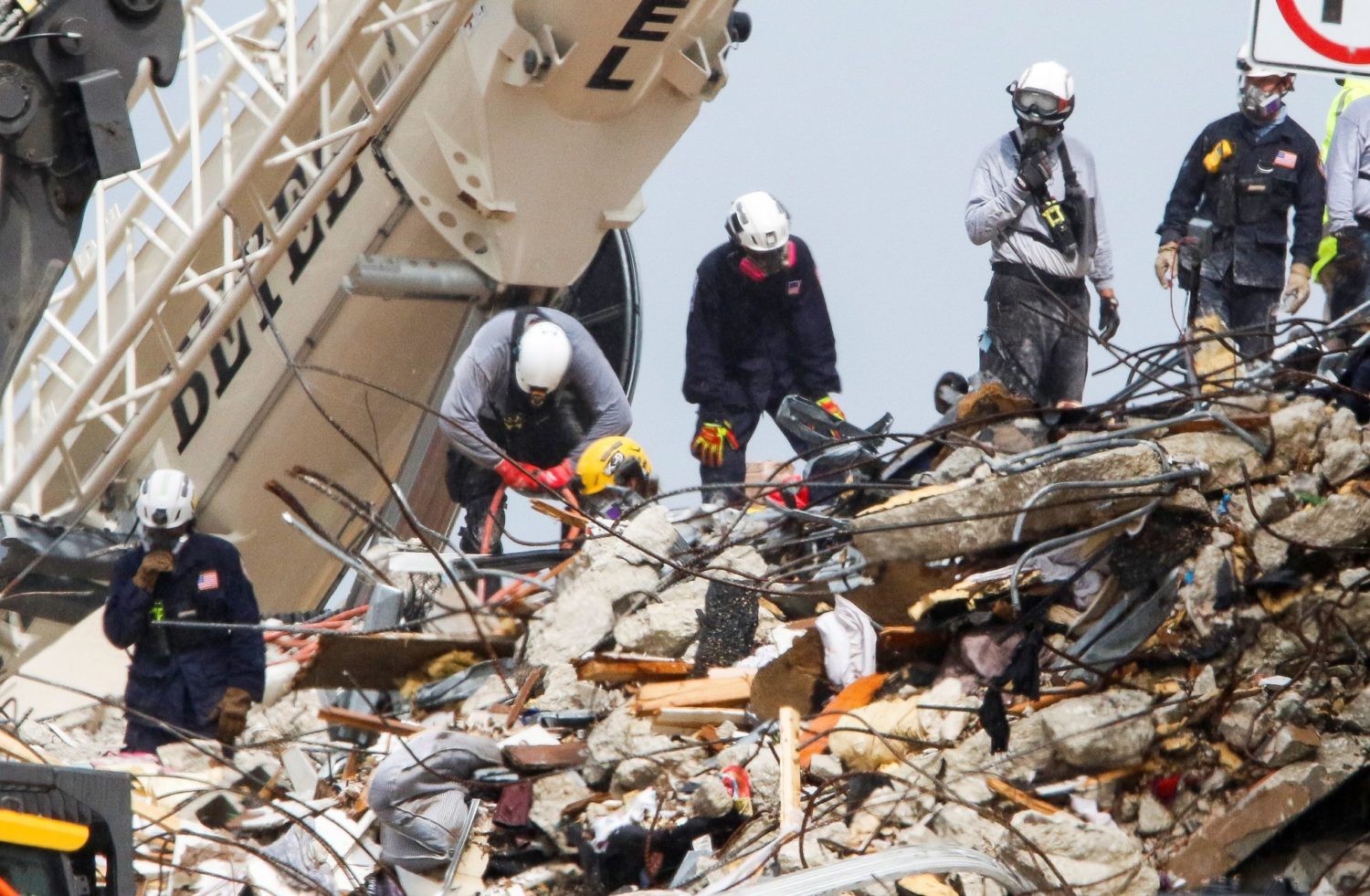 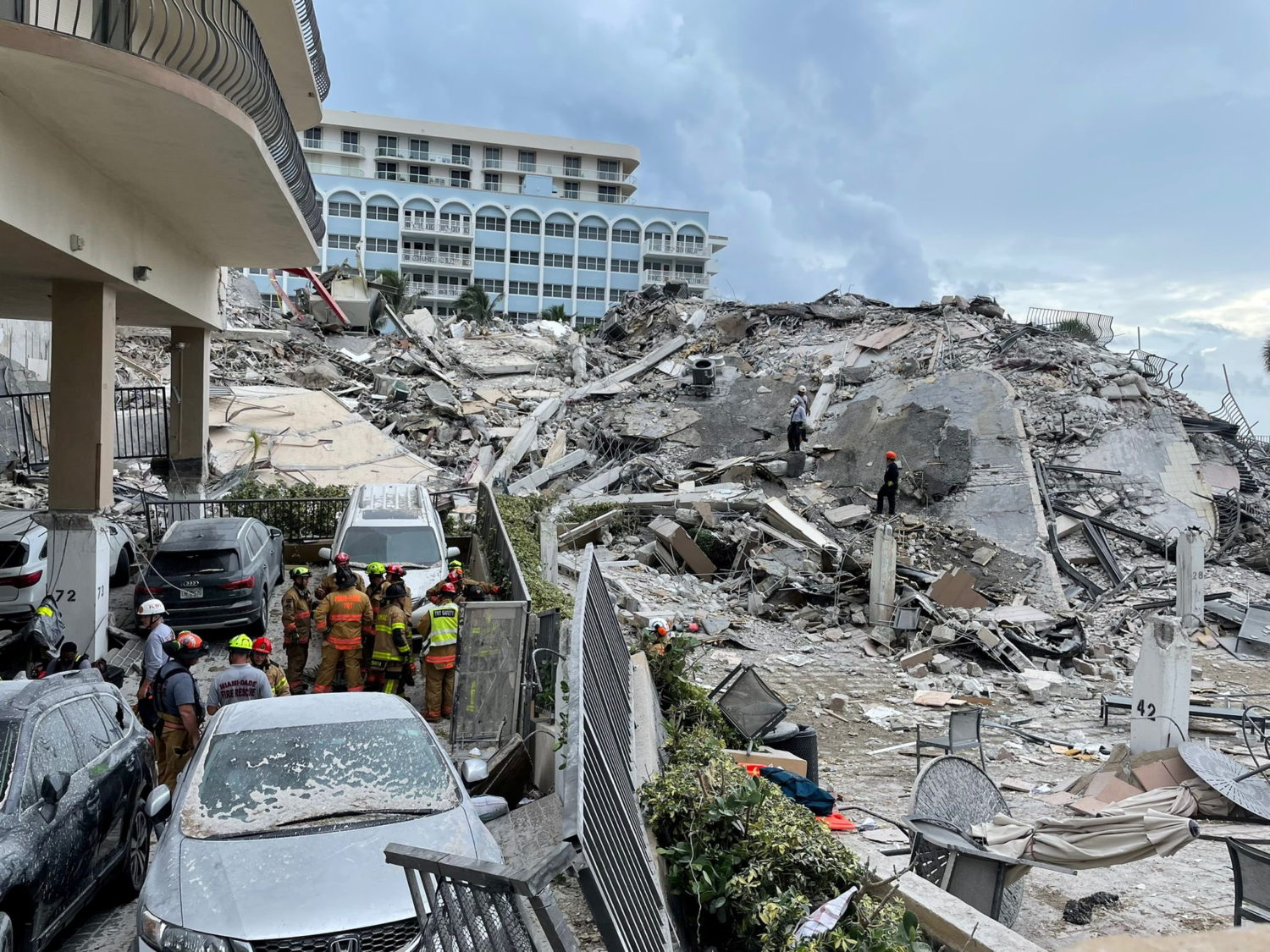 SURFSIDE, Fla. (Reuters) -Families and friends of the 159 people missing after the collapse of a condo building in a Miami suburb were clinging to hope on Friday as rescue workers sifted through a mountain of debris for signs of life, having found four dead so far.

Miami-Dade Mayor Daniella Levine Cava told reporters on Friday crews had pulled three more bodies from the wreckage overnight, after one person was reported to have died on Thursday. Officials increased the number of presumed missing from 99 reported missing on Thursday.

The last time Spiegel communicated with her mom was Wednesday night, when her mother excitedly texted her that she had bought a dress online for Spiegel’s daughter, her granddaughter.

Hours later, early Thursday morning, a large section of the Champlain Towers South condominium in Surfside, a barrier island town across Biscayne Bay from the city of Miami, crumbled to the ground, authorities said.

Video captured by a security camera nearby showed an entire side of the building suddenly folding in two sections, one after the other, at about 1:30 a.m. (0530 GMT) on Thursday, throwing up clouds of dust.

Dozens of people were gathered at a reunification site at the Surfside Community Center on Friday, where the scene was hectic with volunteers running around and people hugging to console each other.

Outside the center, Toby Fried held back tears when she said she last spoke to her brother Chiam “Harry” Rosenberg around midnight Wednesday. Rosenberg had lived in Champlain Towers for about a year and a half. He and his daughter Malki Weiss and Beni Weiss, who were visiting him from Brooklyn, are all missing.

“They came to stay with him for a week on vacation,” Fried said.

Joining the families searching for missing loved ones was Paraguay’s first lady Silvana López Moreira, who traveled to Florida because her sister, brother-in-law and their children were unaccounted for. The first lady’s family owned a condo in the building, local media reported.

Miami-Dade Fire Rescue Assistant Fire Chief Ray Jadallah said on Friday that rescuers had heard sounds in the rubble overnight, but said it could be either falling debris or people tapping.

“We are listening for sounds, human sounds and tapping,” Jadallah said, as rescuers use shovels and jackhammers to tunnel under the debris to find pockets where survivors could be.

Mariela Porras, a friend of a woman who lived in the building with her young daughter and is now missing, said she has not abandoned hope that the two were still alive beneath the rubble.

“I vacillate between hope and I’m heartbroken,” Porras told CNN.

‘WE STILL HAVE HOPE’ Mayor Cava on Friday said that rescue teams were “incredibly motivated” to find anyone who might have survived the collapse.

“We still have hope that we will find people alive,” the mayor said.

She said on Thursday that 110 individuals whose whereabouts were initially unknown have since been located and “declared safe.”

A fire official said earlier that 35 people were evacuated from the section of the high-rise left standing, and response teams using trained dogs and drones in the search pulled two individuals from the rubble. One of them was dead.

What caused the 40-year-old high-rise to cave in was not immediately known, although local officials said the 12-story tower was undergoing roof construction and other repairs.

Space-based radar data showed that the land underneath the building was sinking during the 1990s, according to a 2020 study. That by itself would not cause a building’s collapse but it is worth investigating further, according to Florida International University professor Shimon Wdowinksi, one of the study’s authors.

The sinking, or subsidence, underneath the building amounted to 1 to 3 millimeters per year, which could add up to several inches over a decade, according to the study.

Late Thursday night, a resident of the collapsed building filed what is believed to be the first lawsuit against the condominium, the Champlain Towers South Condominium Association.

Manuel Drezner said in the proposed class action that the collapse could have been avoided had the condominium made needed repairs and ensured it was safe.

He said the condominium should pay unit owners millions of dollars for their “unfathomable loss.”

Officials said the complex, built in 1981, was going through a recertification process requiring repairs, with another building under construction on an adjacent site.

The Champlain Towers South had more than 130 units, about 80 of which were occupied. It had been subject to various inspections recently due to the recertification process and the adjacent building construction, Surfside Commissioner Charles Kesl told Miami television station WPLG Local 10.