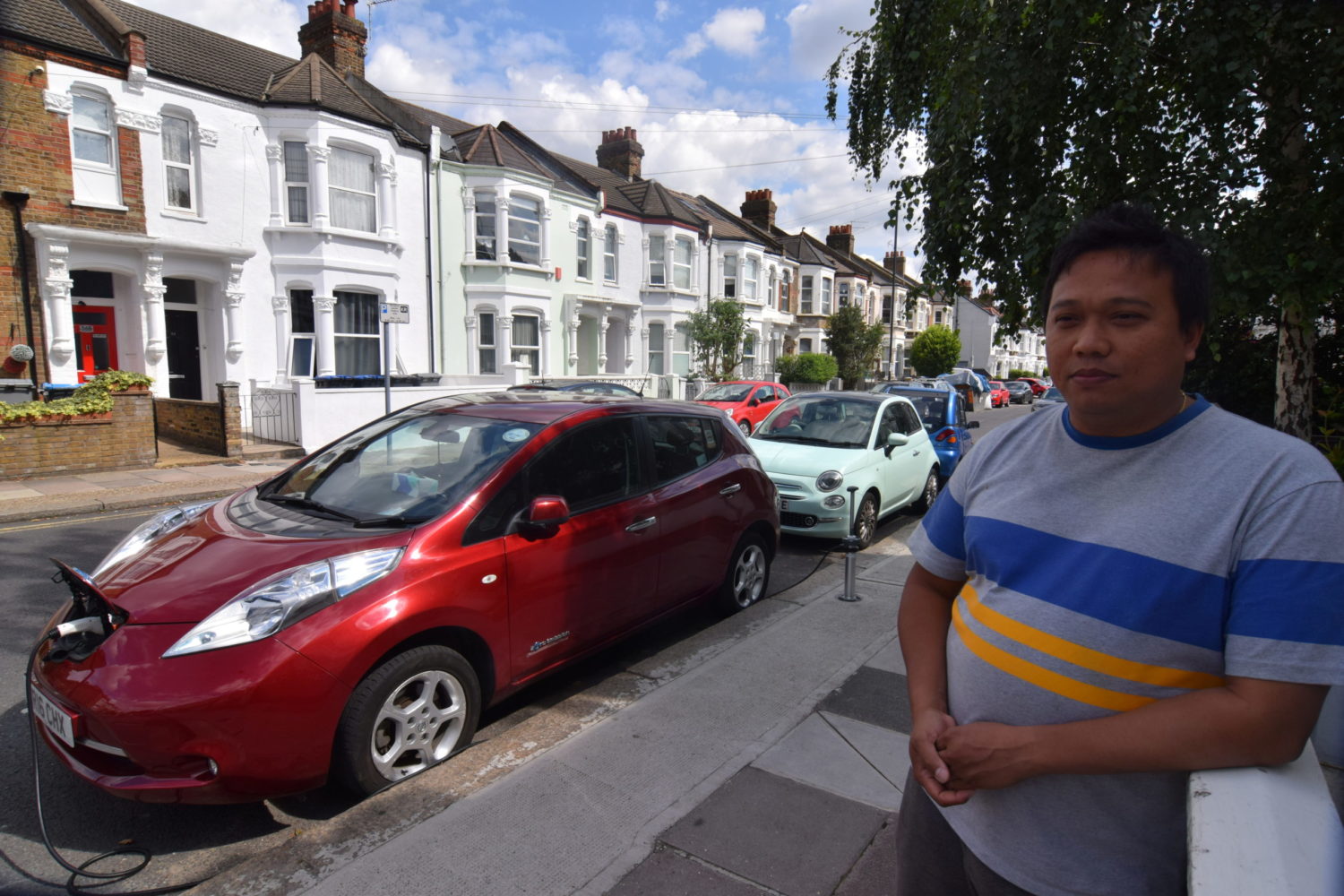 By Nick Carey and Tina Bellon

LONDON (Reuters) -European and U.S. cities planning to phase out combustion engines over the next 15 years first need to plug a charging gap for millions of residents who park their cars on the street.

For while electric vehicle (EVs) sales are soaring in Europe and the United States, a lag in installing charging infrastructure is causing a roadblock.

Often cash-strapped local authorities have other priorities than a curbside network of charging points which would allow owners to ensure their EVs are always topped up.

And while that leaves a potential gap for the private sector, it is one that few EV charging startups, who have been early adopters in other locations, are focused on.

Trojan has developed a charger, which is being tested on residential streets in two London boroughs, where EV owners insert a short pole into sockets sunk into the pavement and then plug in their car.

Tim Win, an Uber driver who charges his Nissan Leaf every day, is using the system in Brent, north London.

“After I’ve been driving all day I just want to come home and plug in,” said Win, 39, who previously used a nearby EV fast charger to charge up in 20 minutes but sometimes had to wait in line for nearly an hour.

A “cabbie” using one of London’s new electric black taxis told Reuters he often has to drive between charging points, losing valuable custom as he does, only to find they are either already in use or malfunctioning.

Like the roll out of fiber optic cable for ultra-fast broadband, urban on-street charging using solutions which include lamp post chargers or even wireless, will cost billions.

Solutions like Trojan’s are expensive because they require grid connections. And because there are not yet enough EV owners to ensure a quick return, they are 75% subsidized by Britain’s government.

Trojan’s chargers cost around 7,000 pounds ($9,520) to make and install, but Mackenzie says that if that can be cut to 4,500 pounds it will work for private investors.

“The biggest factor in whether curbside charging is successful is whether you have an interested and engaged municipality,” said Travis Allan, vice president for public affairs at Quebec City-based FLO, which has installed at least 7,000 curbside chargers in Canadian and U.S. cities.

Yet even engaged local authorities like Brent, which is trying lamp post chargers and other solutions, simply lack cash.

“The prospect of being able to fund them ourselves out of our own budgets is practically zero,” Martin said.

Based on car registrations and parking permits, charging startup char.gy estimates there are between 5 million and 10 million cars in London, of which around 76% park on the street.

Government figures show the total is around 40% for Britain’s 33 million cars, while around 40% of Americans do not live in single-family homes with garages.

And while the rise of car sharing services may reduce the need for on-street charging, it is unclear by how much.

Char.gy Chief Executive Richard Stobart estimates Britain will need half a million on-street chargers by 2030, when around half of the country’s cars should be electric. Char.gy runs a network of around 1,000 on-street lamp post chargers in Britain that cost around 1,800 pounds to make and install.

“So they just dither and it takes forever,” he added.

Ubitricity, a Royal Dutch Shell business, is the British market leader, with just 4,000 chargers using lamp posts, which if they are close enough to the curb and use LED lamps, have enough power to mostly charge an EV overnight.

“You will need chargers at home, at work, at the supermarket, you will need fast charging, but mainly you need charging everywhere,” Hartman said.

“If the infrastructure isn’t there then people will hesitate to buy an electric car unless they are forced to,” he added.

Europe has more than 90 million lamp posts, millions of which can be used for charging, said Hartman, whose ubitricity also runs a lamp post charger network in Berlin.

The European Commission knows urban chargers “will be essential to convincing more and more consumers to go electric,” and has formed an expert group to advise cities on how to deploy them, a spokesperson said.

Some cities face a huge challenge.

New York state has set a goal for all new passenger cars and light-duty trucks to be zero-emission by 2035.

But New York City currently has just 1,580 charging plugs for around one million cars that rely on street parking.

“Owning an EV in a large city like New York is a really painful experience,” said Paul Suhey, co-founder of electric moped sharing startup Revel, which has launched the city’s first fast-charging hub.

An April study commissioned by New York estimated electrifying its transportation would cost some $500 billion.

In Los Angeles, which has the most chargers of any U.S. city, Blink Charging last year bought city-run EV car sharing network BlueLA, which has 100 vehicles and 200 charging stations.

Blink CEO Michael Farkas said local authorities want charging infrastructure in as many places as possible to encourage people to buy EVs, but companies cannot afford to shoulder the investments until ownership rises.

“You can’t just have a field of dreams, you’ll go broke unless the government wants to pay for it,” Farkas said.

Even in Norway, where state support put it at the forefront of the electric shift, rolling out on-street charging is tough.

But making charging accessible for the 30% of car owners who lack designated parking in a city where bans on fossil-fuel cars will start in the next few years is a major challenge.

“It’s extremely important that everybody, regardless of their economic background, gets to be a part of the green shift,” Portvik said. “And they will have to because in a few years they will have to sell their diesel car.” 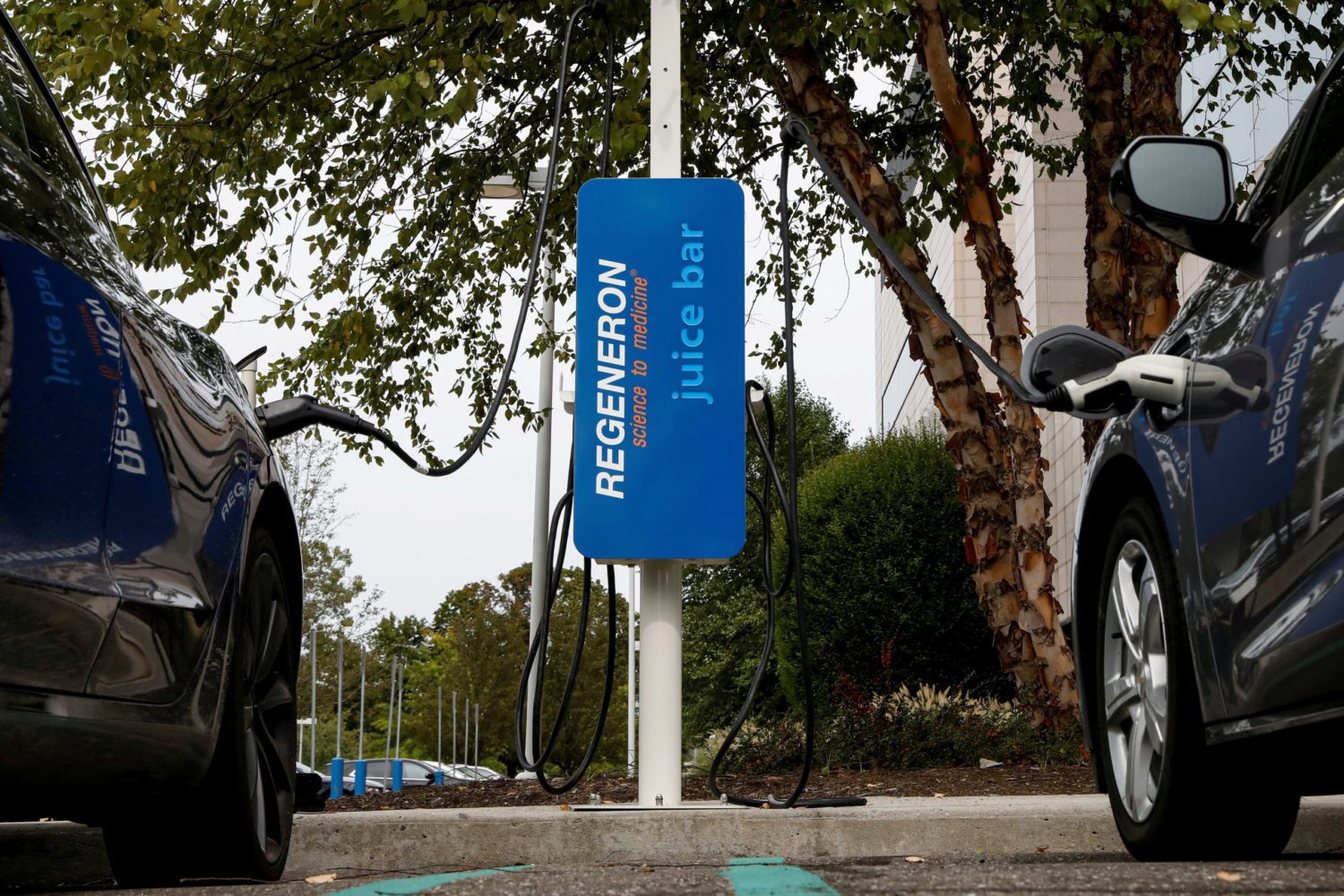