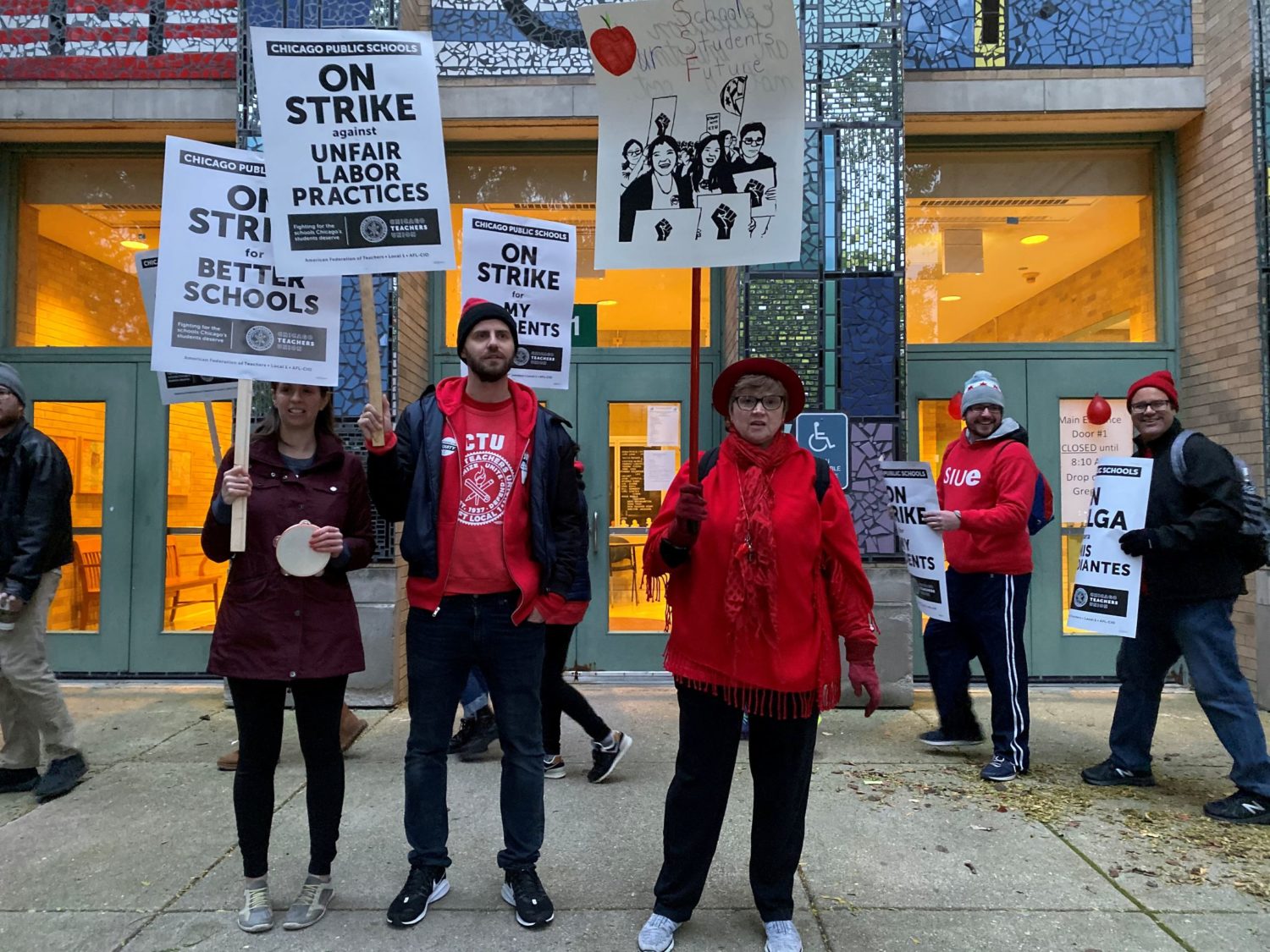 Chicago Public Schools canceled classes for Friday, but the leader of the Chicago Teachers Union said good progress was made during negotiations on Thursday.

“We had conversations that hopefully will give us a path to a settlement,” CTU President Jesse Sharkey said at a Friday morning news conference. “Right now I’m guardedly optimistic.”

The union, which represents the city’s 25,000 teachers, has been without a contract since July 1. The strike began on Oct. 17.

The strike is the latest in a wave of teacher work stoppages in cities and states across the United States. Some of the strikes, such as a six-day work stoppage in Los Angeles last winter, have been based on similar school resource demands.

Only a three-week teachers strike in Union City, California, in June was longer this year.

Student athletes are feeling the repercussions, as the strike has forced the cancellation of hugely popular high school football games, with college scholarships on the line, as well as other sports and after-school activities.

That prompted one parent to seek a temporary restraining order in Cook County, Illinois, to allow the child’s team to compete in state cross-country playoffs over the weekend, ABC News said.

Chicago teachers voted to go on strike against the third-largest U.S. school district after contract negotiations failed to yield a deal on pay, class overcrowding and a lack of support staff, such as nurses and social workers.

The strike has been the first major political test for Mayor Lori Lightfoot, a political newcomer who was elected in April.

Lightfoot, a progressive Democrat whose campaign promised to reform the school system, has said the district offered teachers a raise of 16% over five years and promised to tackle class sizes and staffing levels.

But she said the district could not afford the union’s full demands, which she estimated would cost an extra $2.4 billion annually, representing more than a 30% increase to the current $7.7 billion school budget.

“While the public is very sympathetic to the issues of more nurses and so on, there’s a pretty good understanding that it just doesn’t come out of thin air and will have to take years of effort to make the schools better,” said Dick Simpson, a political science professor at the University of Illinois at Chicago and a former Chicago City Council member. 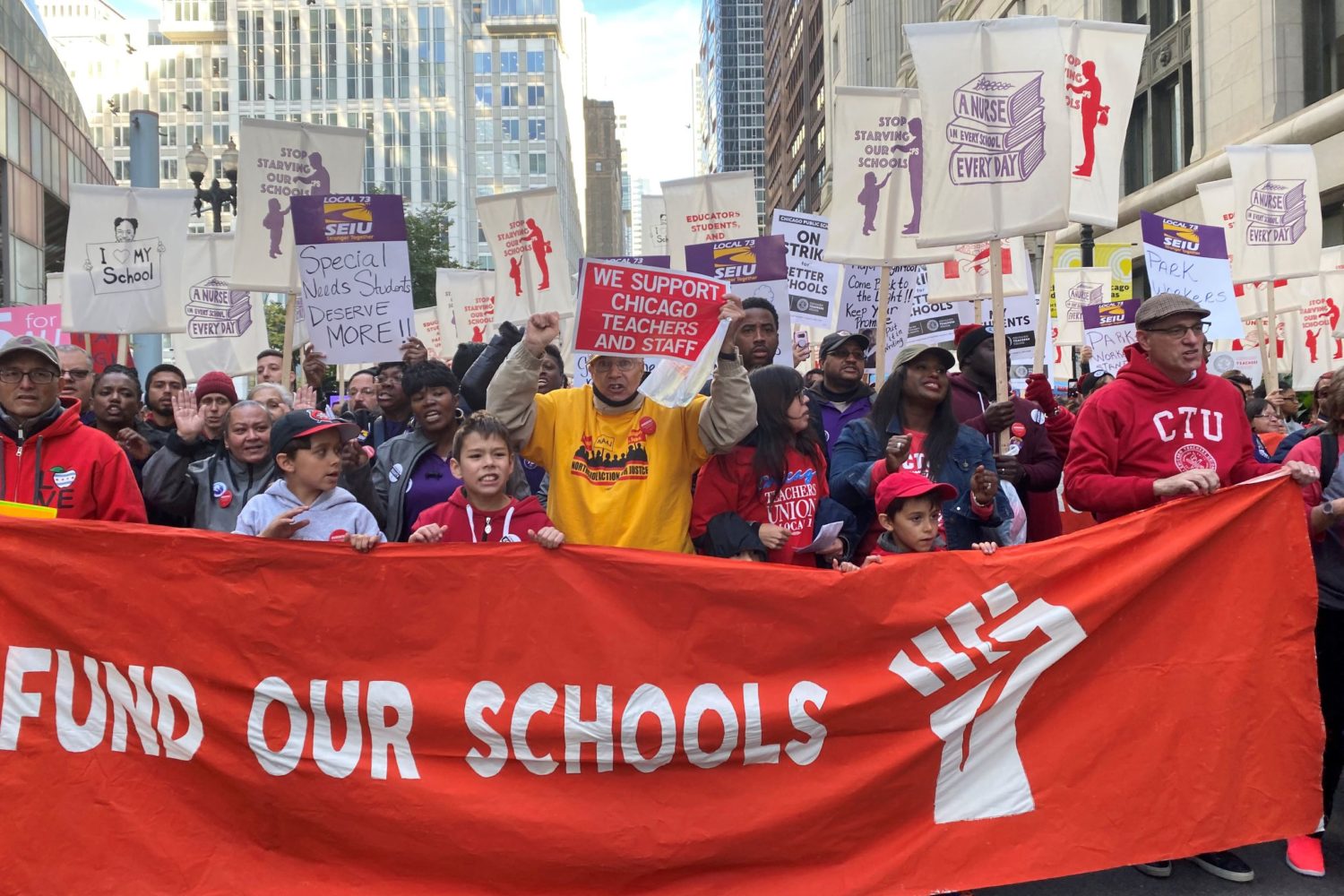 Classes canceled for 361,000 students as Chicago teachers go on strike
By Brendan O’Brien

CHICAGO (Reuters) – Teachers in the Chicago Public Schools system, the third-largest school district in the U.S., went on strike on Thursday after protracted labor negotiations between the union and district leadership failed to produce a deal.

The work stoppage canceled classes for 361,000 students, but school buildings stayed open for children who need a place to go during the strike, officials said. Schools will serve breakfast and lunch, but all after-school activities, including sports, tutoring and field trips, have been canceled.

Teachers planned to picket at more than 500 schools across the city beginning at 6:30 a.m. (1530 GMT) before holding a downtown rally and march in the afternoon.

The strike is the latest in a recent wave of work stoppages in school districts across the United States in which demands for school resources have superseded calls for higher salaries and benefits. In Chicago and elsewhere, teachers have emphasized the need to help under-funded schools, framing their demands as a call for social justice.

Thousands of Chicago teachers staged a one-day walkout in 2016 to protest the lack of a contract and failures to stabilize the finances.

The proposal would provide teachers with a 16% raise over five years along with support for oversized classes, enforceable targets for reducing class sizes and adding more support staff across the district, she said.

The mayor said the union’s full list of demands would cost the district an additional $2.5 billion annually.

CPS finances “are still recovering from the brink of insolvency, and we do not have unlimited funds,” the mayor said.

The district’s credit ratings remain at the non-investment, or “junk” status, although they have improved in the wake of a revised statewide school funding formula that boosted revenue for CPS operations and pension payments.

(Reporting by Brendan O’Brien in Chicago; Editing by Gerry Doyle)