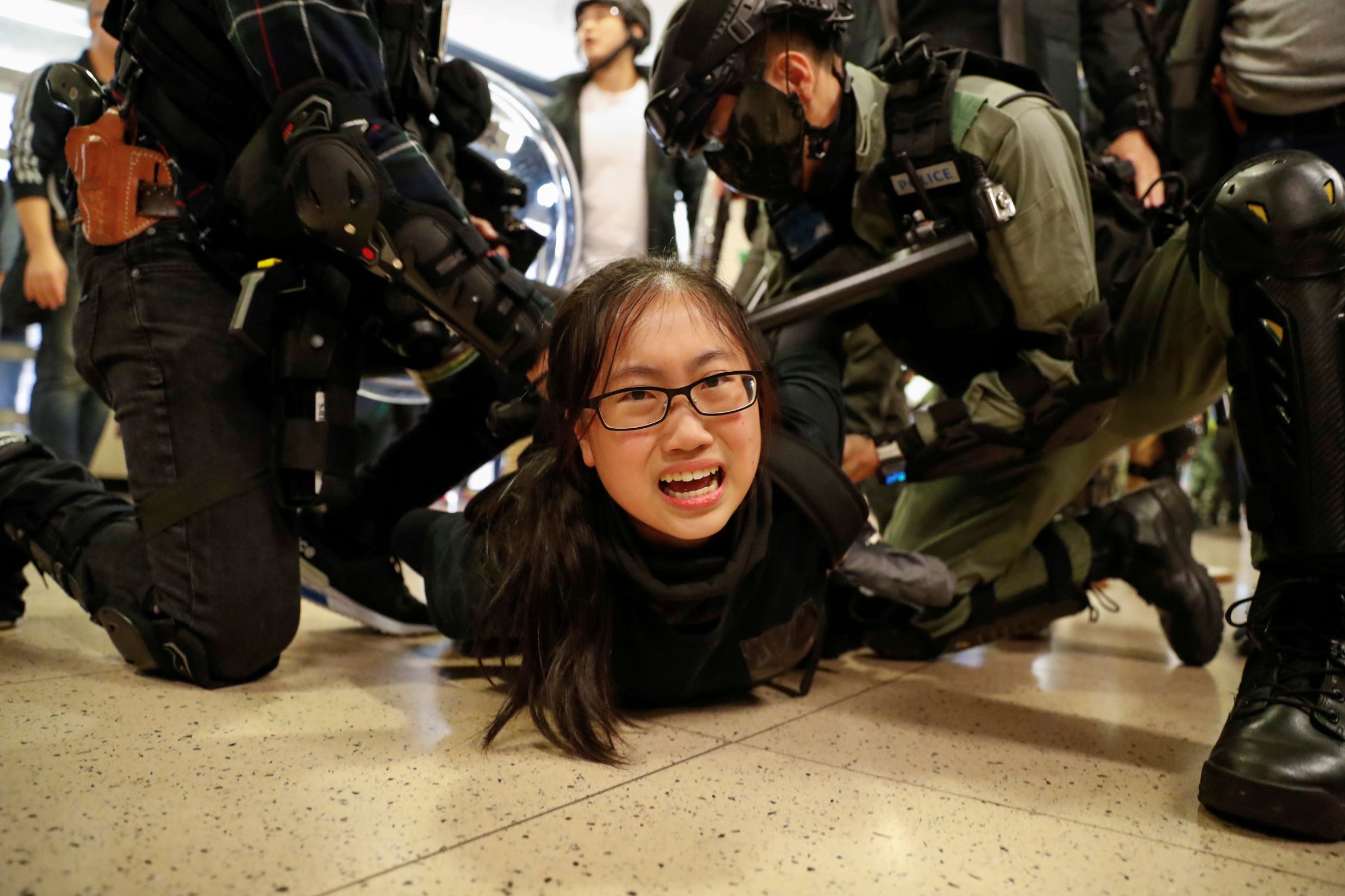 HONG KONG (Reuters) – Small groups of protesters gathered in shopping malls across Hong Kong on Sunday amid brief scuffles with riot police as attention turned to an upcoming meeting between Hong Kong’s leader and China’s president.

Hong Kong leader Carrie Lam is scheduled to meet Chinese leader Xi Jinping in Beijing on Monday and some observers say the visit could yield fresh directives including a possible cabinet reshuffle.

Lam, however, appeared to play that down before she left, saying the first task was to curb violence and restore order.

On Sunday in the peak shopping season ahead of Christmas, groups of masked protesters, clad in black, marched through several malls chanting slogans including “Fight for freedom” and “Return justice to us”.

In Shatin, Reuters witnessed police firing a tear gas canister outside the New Town Plaza mall, and several people were taken away after entrances and walkways were blocked, glass panels smashed, and graffiti sprayed.

Police said in a statement that some shops had been damaged and that a smoke bomb had been set off. Many shops closed early.

In the evening, several hundred protesters held a vigil for a protester who fell to his death outside a luxury mall exactly six months ago after holding up a banner. Some laid white flowers, as others softly hummed ‘Sing Hallelujah’ to commemorate Leung Ling-kit, known as “raincoat man” for what he wore at the time.

“He is the first person to die because of this revolution,” said Tina, 18. “I came tonight because I want to always remember that we can’t give up and we have to keep fighting for freedom.”

Several hundred people, many social workers, gathered earlier to reiterate demands that include full democracy and an independent inquiry into allegations of police brutality. Some called for more mass strikes, while others sat at tables to write Christmas cards to those who have been jailed.

Separately, a pro-government rally drew over a thousand people, with participants denouncing the use of violence during protests.

Hong Kong has been embroiled in its worst political crisis in decades since June with anti-government protests posing a populist challenge to China’s Xi and complicating ties between China and the United States at a time of heightened tensions including over trade.

Demonstrators have railed against what they see as Chinese meddling in freedoms promised to Hong Kong when the former British colony returned to Chinese rule in 1997, gradually ramping up the use of violence over many months of unrest.

They also say they are responding to excessive use of force by police. Last Sunday, a protest march drew around 800,000 people, according to organizers, suggesting the movement still has significant public support.

The government is planning more public dialogue through social media channels, as well as a second town hall session with top officials to try to bridge differences.

Despite the febrile public mood, China maintains it is committed to the “one country, two systems” formula granting Hong Kong autonomy and says it fully supports Lam.