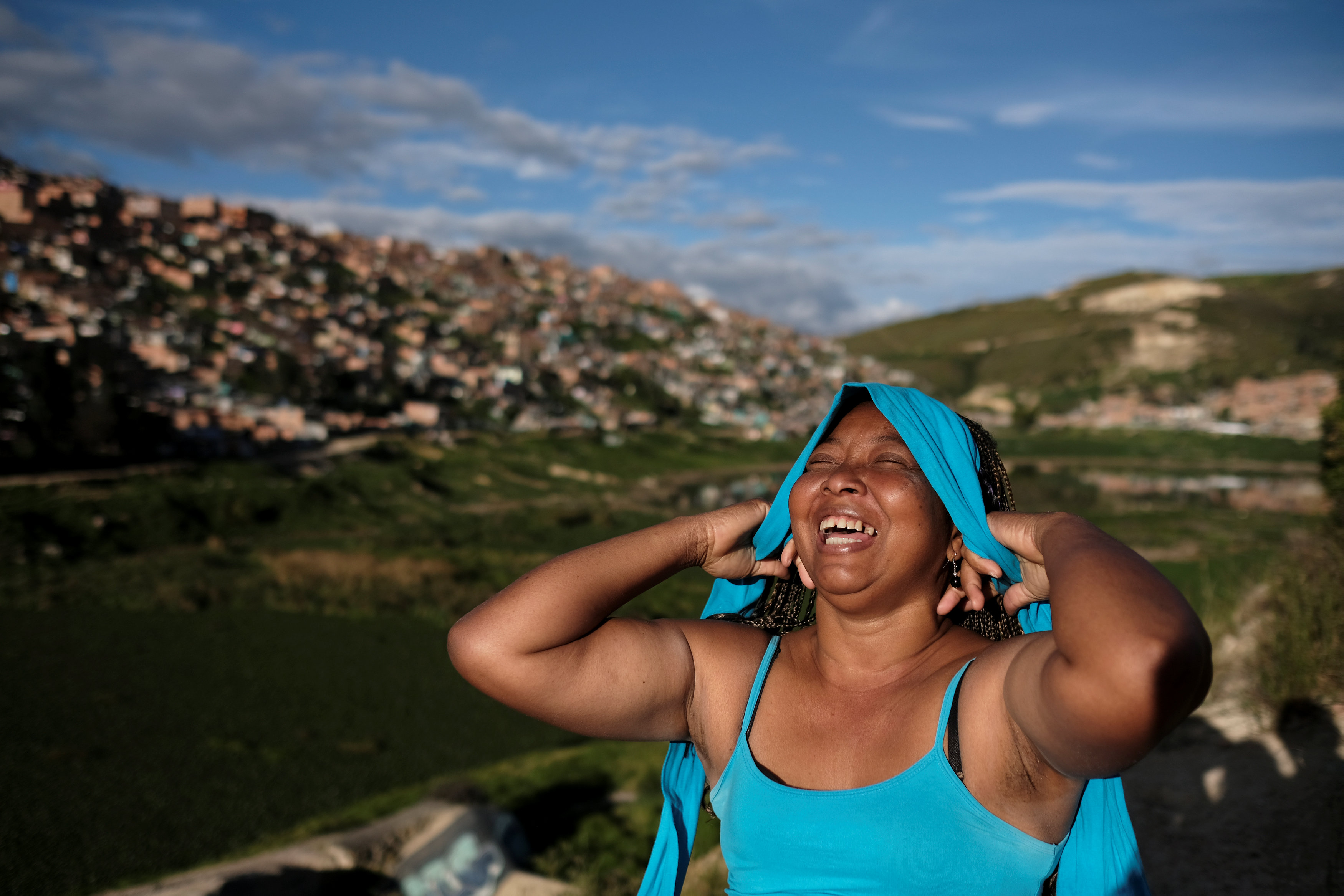 By Nacho Doce and Daniel Flynn

SOACHA, Colombia (Reuters) – Yeimy sobbed with her head in her hands as she described how her husband was tied to a pole, gagged and made to watch as she was raped by four fighters from the Revolutionary Armed Forces of Colombia (FARC) 12 years ago. 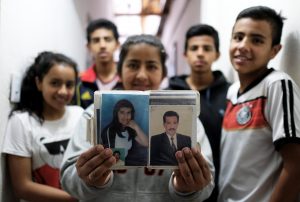 Yeimy (C), 37, who was raped by four rebel fighters from the Revolutionary Armed Forces of Colombia (FARC) during the five-decade civil war, holds photographs of herself and her husband Elkin, as she poses with her children at their house in Soacha, on the outskirts of Bogota, Colombia, May 28, 2018. REUTERS/Nacho Doce

Her husband, Elkin, had been abducted by the FARC’s 45th Front in the Tolima region of central Colombia after refusing to pay a revolutionary tax or hand their six-year-old son to the Marxist rebels to become part of the armed group, Yeimy said.

After trekking through the jungle for days to find the rebel camp, Yeimy pleaded for her husband’s release but the FARC commander, known by the nom de guerre Pepito, demanded a terrible price, she said.

“He told me, ‘I will pick four of my men and they can do what they want with you’,” said the 37-year-old, who asked that her family name not be used.

After securing a deal for the release of her husband, Yeimy fled with her family to Soacha, near Colombia’s capital Bogota, which is home to tens of thousands displaced by the conflict.

But two years later the rebels who had kidnapped Yeimy’s husband found them, claiming the couple still owed FARC the so-called revolutionary tax. Yeimy said they took away her husband and shot him.

Yeimy is one of hundreds of women who has come forward to talk to victims groups about their alleged sexual abuse during Colombia’s five decades of civil war. After a 2016 peace deal with the FARC the government set up a Special Peace Tribunal (JEP) to try crimes committed by all sides in the conflict.

Yeimy has started therapy sessions with a psychologist to overcome her fear so she can testify before a public defender, said Sonia Tarquino, who runs a victims program in Soacha. 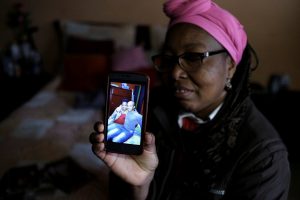 Lina, who said she was raped by dozens of right-wing paramilitary fighters in the Montes de Maria region during the five-decade civil war, shows the picture of her son Over on the mobile phone inside her house in Soacha, on the outskirts of Bogota, Colombia, May 28, 2018. . REUTERS/Nacho Doce

Reuters has not been able to verify Yeimy’s account independently. FARC spokesman declined to comment on individual allegations of war crimes since the peace deal, saying these cases will be heard by the JEP.

The tribunal’s president, Patricia Linares, has said those responsible would not be allowed to escape justice, but would be eligible to receive non-jail sentences if they came clean about the crimes.

Colombia’s National Centre for Historical Memory estimates 15,687 people were victims of sexual violence during the conflict, at the hands of right-wing paramilitary groups, security forces and the guerrillas.

Armed groups used sexual violence, including gang rape, to instill fear in communities, as a way of imposing their control over an area and as a form of punishment, rights groups have said.

The 2016 peace deal between the Colombian government and the FARC guarantees non-jail sentences for crimes related to the conflict, provided those responsible fully admit their wrongdoing and tell the truth about what happened. It also furnishes rebels who disarm with lodging and a monthly stipend.

The terms of the accord frustrated many Colombians and it was rejected in a referendum before a modified version was approved by Congress.

Colombia’s right-wing President Ivan Duque, who took office in August, has promised to toughen the terms of the peace deal and make FARC commanders pay for crimes with prison time. He has said those guilty of rape should not be provided with special treatment under the deal.

Yet Duque faces a challenge to overhaul the accord as most parties in Congress support it and the constitutional court has also ruled that the terms of the pact cannot be altered for three presidential terms.

Former President Juan Manuel Santos, who signed the deal with the FARC, told Reuters in an interview in July that most Colombians wanted it implemented to turn the page on the conflict.

Duque has pledged not to do anything that would derail the accord as his government seeks to restore peace but a presidency spokesman said that he would continue to press for rapists to not receive amnesty.

Yet, with large areas of Colombia still prey to armed groups including dissident FARC fighters, Mexican-backed drug gangs, and the ELN leftist rebel group, some Colombians say they fear that tampering with the peace process could drive more former rebels to take up arms again.

More than 7 million people, nearly one sixth of the population, remain displaced by violence in Colombia after decades of internal conflict, according to government figures.

ABUSE BY PARAMILITARY AS WELL AS FARC

Tarquino, who runs the victims program in Soacha, has been holding meetings for women abused during the conflict for four years. Many of the women have, like Yeimy, had family members killed by the FARC rebels or right-wing paramilitary fighters.

Lina, who is now 49 and asked not to reveal her family name, said she was sexually assaulted 22 years ago in northern Colombia by paramilitaries belonging to the Heroes of the Montes de Maria group.

When she refused to take any more, the men sexually abused her using a tent pole, Lina said.

The paramilitary groups, which continued to operate in many parts of Colombia despite a 2006 peace deal, were founded by landowners to protect themselves from rebels but quickly turned to drug trafficking and violence.

Lina’s home province of Sucre was involved in a scandal that erupted in 2006 over ties between paramilitary fighters and local politicians that resulted in the arrest of several congressmen.

“The doctors were named by them. The mayor was appointed by them,” said Lina. “I had to put on a mask to hide the pain that I felt from my child. After 22 years, I can finally declare the facts to the competent authorities.”

Colombia’s government provides compensation to victims of sexual violence, including rape, under a 2011 law.

Lina has given testimony to a public defender and has been classified as a victim but has not yet received any compensation. Her case document, reviewed by Reuters, recognizes she suffered sexual violence, torture and personal injury.

Lina took part in a secret meeting this year with former paramilitaries, including one of the men who abused her, in which they asked forgiveness. Reuters reviewed a video of the meeting but Lina asked not to reveal its location nor the identity of the men.

“We as women have to forgive because we cannot live with this anger inside us,”said Lina.