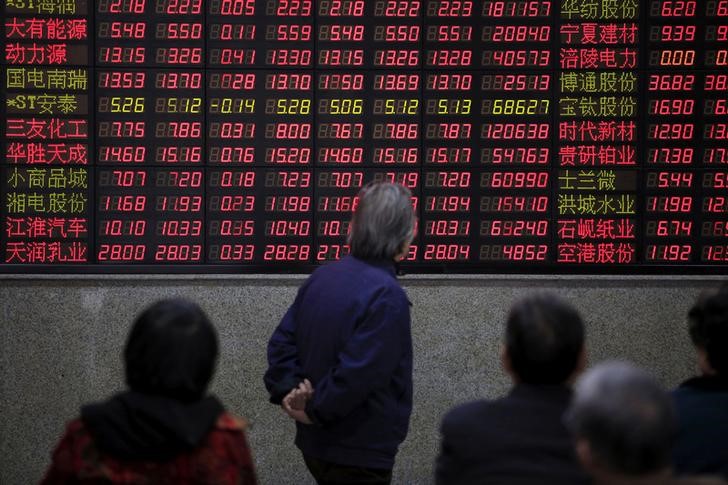 LONDON (Reuters) – A slump in oil prices to the lowest in almost six months rattled markets on Friday, prompting a rally in safe-haven bonds, the yen and gold and taking the shine off a record-breaking week for world stocks.

Bourses flinched in both Asia and Europe and Wall Street also looked set for a subdued start as investors, who had been expecting to spend the day mostly looking ahead to U.S. jobs data and Sunday’s French elections, were caught off guard.

Traders had had to duck for cover overnight as both Brent <LCOc1> and U.S. <CLc1> crude fell more than 3 percent amid record trading volumes on mounting concerns about global oversupply.

Things only fully stabilized when Saudi Arabia’s OPEC chief hit the wires in European hours, saying there was a growing consensus among oil pumping countries that they needed to continue to “rebalance” the market.

Brent clawed back to $46.86 a barrel almost two dollars better off than its overnight low, but the scars left it an eye-watering 6 percent lower than at the start of the week.

“The whole commodity complex has been affected by this and it could have some pretty big implications if it continues for much longer,” said Saxo bank’s head of FX strategy John Hardy.

“If you look at global risk appetite, equities have been pretty quiet and that feeds into FX as well if carries on and there is a risk switch.”

Big commodity price drops do not just have an immediate impact on financial markets either.

As was seen during a slump between 2014 and 2016, they cause major headaches for countries that rely on their revenues. They also unleash deflationary forces, but can help energy-importing economies, firms and households by lowering their energy bills.

Oil has not been the only commodity that has suffered this week. Chinese iron ore futures <DCIOcv1> fell almost 7 percent in Shanghai overnight after tumbling 8 percent on Thursday.

The Canadian dollar <CAD=>, the Australian dollar <AUD=> and Russia’s rouble <RUB=> – some of the world’s most commodity- sensitive currencies – were all sent spinning, falling respectively to 14-month, four-month and seven-week lows.

They all fought back, though, after the Saudi OPEC governor’s comments to Reuters that: “A six-month extension (to production cuts) may be needed to rebalance the market, but the length of the extension is not firm yet.”

Rio Tinto <RIO.L> hit a six-month low on Friday, and Glencore <GLEN.L> was set for its worst weekly losses in two months, while for copper miner Antofagasta <ANTO.L> since December

LE PEN TO THE SWORD?

The gap between French and German 10-year government borrowing costs also hit a six-month low and despite the dip on the day, European shares <.STOXX> were heading for a healthy 1.2 percent rise for the week. World shares <.MIWD00000PUS> hit a record high on Wednesday.

“I think now this election is no longer an issue and the market is already starting to focus on new issues: inflation, the (euro zone) economy, and the U.S. data,” said DZ Bank strategist Daniel Lenz.

The dollar <.DXY> and U.S. government bond yields <US10YT=RR> had both been nudged lower by the commodity market worries. It is set to be the fourth weekly fall on the trot for the greenback which is now at its lowest since November.

The yen <JPY=> and gold <XAU=> rose in tandem as investors took refuge in safe havens, though the latter remained on track for its biggest weekly decline in nearly six months on bets that U.S. interest rates will rise again in the coming months.

“I think the payrolls will be under consensus,” said fund manager Hermes chief economist Neil Williams.

“It fits with my view that the U.S. is going to peak out at a far lower interest rate than markets expect. The Fed’s dot plots says 3 percent, but I’m going closer to 1.5 percent.”

Emerging markets were also caught in the commodities sell-off. The main emerging currencies were all on track for weekly losses and MSCI’s closely-followed EM stocks index <.MSCIEF> hit a 10-day low.

China markets have also been wobbling in recent weeks but the commodity market woes have been the central focus.

Brent traded volumes on Thursday reached an all-time high of nearly 542,000 contracts, suggesting that big betting hedge funds may have been ripping out long positions.

“It is now-or-never for oil bulls,” said U.S. commodity analysis firm The Schork Report. “They either put up a defence here or risk further emboldening the bears for a run at the $40 threshold (for WTI).” 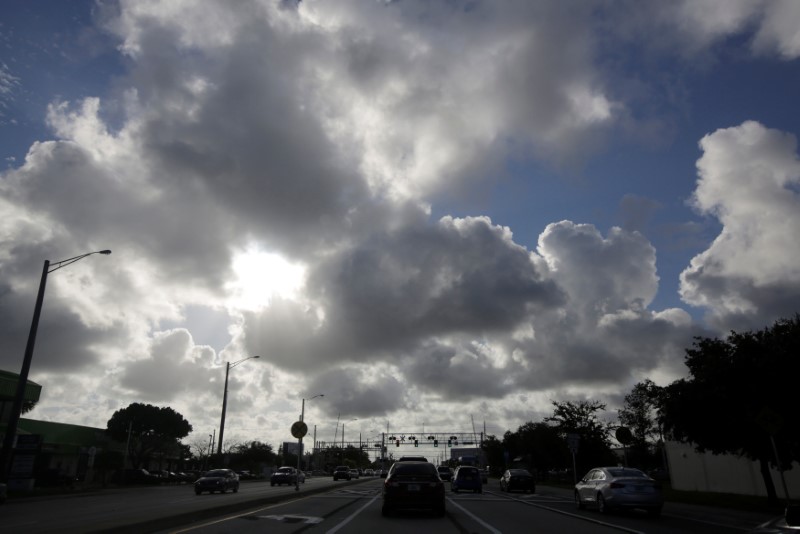 NEW YORK (Reuters) – Hurricane Matthew, the fiercest Caribbean storm in nearly a decade, roiled commodities markets and forced companies from cane refiners to orange juice makers to shutter as it whipped its way toward the southeastern United States on Thursday.

Southeastern companies were closing down operations ahead of a storm that could threaten some two million tonnes of sugar and trees representing over 90 million boxes of citrus fruits in Florida. About half a million acres of cotton were at risk from torrential rain in North and South Carolina, where farmers have already been struggling during a rainy harvest.

Officials issued a state of emergency for parts of Florida, Georgia and the Carolinas for the Category 4 hurricane that by Thursday afternoon had already taken the lives of 140 people, mostly in Haiti. Port operations along the coast were slowing or shut.

For commodities markets including U.S. sugar, orange juice and cotton, the storm prompted a volatile week of trade. Though forecasters like senior meteorologist Drew Lerner of World Weather Inc said damage to Florida’s sugar and citrus crops would likely be limited, producers were readying for the worst.

The storm has forced a shutdown of sugar operations just days into the harvest, said Ryan Weston, executive vice president of the Sugar Cane League, which represents growers in Florida, Texas and Hawaii.

“Depending on the intensity and path of the winds, hurricanes will knock the cane down to the ground, slowing harvest way down. It hurts this harvest and the next,” Weston said.

The storm was expected to hit Florida or brush along the state’s east coast through Friday night, then work its way up the Atlantic coast.

As of 5 p.m. (2100 GMT) Thursday, Matthew contained sustained winds of 140 mph and gusts up to 165 mph, according to the U.S. National Hurricane Center. It was about 100 miles east-southeast of West Palm Beach, Florida, and was moving to the north-northwest at 14 mph.

Florida’s east coast, predominantly grapefruit country, was expected to bear the brunt of the storm. There, trees have already been weakened from disease, said Lerner.

“Our growers are already facing challenges,” said Nikki Hayde, senior marketing manager for Florida’s Natural Growers, a cooperative of about 1,000 citrus farmers throughout the state.

“We are trying to get out orders that were scheduled for Thursday and Friday on the road as quickly as possible,” she said.

‘HARVESTING AS FAST AS WE CAN’

Smithfield Foods, a subsidiary of WH Group Ltd and the world’s largest hog producer and pork processor, moved to protect people, animals and buildings from the impending storm, said company spokeswoman Keira Lombardo in an e-mail.

Crews at the port of Wilmington, North Carolina, prepared for Matthew’s winds by lowering container stacks and tying down equipment.

In North and South Carolina’s cotton-growing regions, farmers raced to bring in fiber from fields where rains have delayed harvesting and the plants were at one of their most vulnerable stages, most susceptible to the 2 to 15 inches of rain expected.

“It’s tricky,” said Michael Quinn, president and chief executive of Carolinas Cotton Growers Cooperative Inc. “The growers are harvesting as fast as they can.”

“We are closely monitoring conditions ahead of the storm and working proactively with farmers to help them prepare for a significant rainfall event. Governor McCrory has declared a state of emergency for all 100 counties in North Carolina as we brace for as much as 10 to 12 inches of rain in our coastal areas,” said North Carolina Department of Environmental Quality spokeswoman Stephanie Hawco.

(Reporting by Chris Prentice in New York and Theopolis Waters and Karl Plume in Chicago; Editing by James Dalgleish)