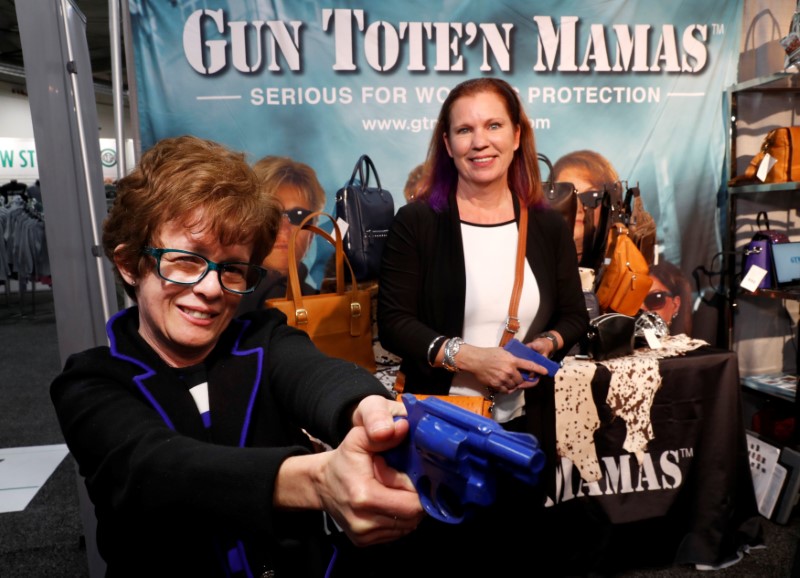 LAS VEGAS (Reuters) – Entrepreneur and fashion designer Anna Taylor is trying to bring back the corset — not to revive Victorian lingerie but to give women a place to carry their handguns. 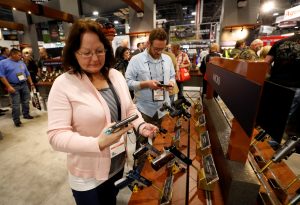 “I don’t know that the corset’s ever been out of fashion, but it’s never been so useful,” Taylor said in Las Vegas at this year’s SHOT Show, the largest trade show for the firearms industry.

After overlooking the women’s market for years, the firearms industry now sees women as the drivers of growth. Gun sales have declined since peaking in 2016, with companies like Remington Outdoor Company Inc going through bankruptcy reorganization last year, but the women’s share of the market has been growing.

Women have led the change, both as consumers and as entrepreneurs in the world of accessories, forcing gun-makers to follow their lead.

Retailers estimate women accounted for 23 percent of the $44 billion retail market for firearms and accessories in 2016, up 7 percentage points from 2010, according to data from the National Shooting Sports Foundation, which runs the Shooting, Hunting and Outdoor Trade (SHOT) Show.

U.S. firearms sales peaked at 15.7 million in 2016, according to NSSF data. Sales fell to 14 million in 2017 and are on pace to dip again in 2018. The trend reflects politics, with sales driven by fears that a Democratic president will limit gun rights. 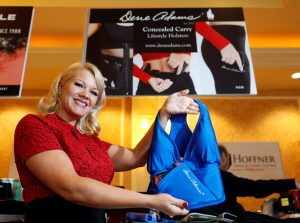 Taylor created her own company, Dene Adams, in 2013 upon growing frustrated over the lack of holsters for women.

Among the hot items this year are yoga pants with enough support in the waistband to carry the weight of a gun. Taylor also pulled up the hem of her skirt, showing off her compression shorts with a built-in thigh holster that allows a woman to pack a piece whether she is dressed for a night on the town or Monday morning at the office.

Men’s holsters have traditionally been designed around the belt, but because women wear a variety of outfits they need options in the bra, waist, belly, underarm, thigh, ankle and purse. That also means women need to practice their draw from multiple angles.

Firearms companies once engaged in what is derisively called “pink it and shrink it,” offering traditional guns in feminine colors and promoting smaller guns to fit a woman’s hand, which is not necessarily a solution as lighter guns have more recoil.

Carrie Lightfoot created the Well-Armed Woman in 2012 to give women easier access to information and products and now has 400 chapters across the United States. 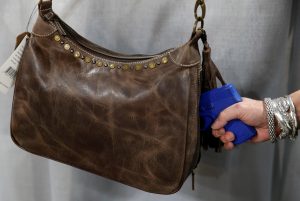 Paul Spitale, a senior vice president at Colt’s Manufacturing Company, said the company made famous by the .45-caliber handgun offers a wider range of 9-millimeter options, in part because the 9 mm is by far the most popular choice for women.

“When I walked into my first SHOT Show in 2009, I was stunned” at what she called the “booth babes,” said Claudia Chisholm, owner of Gun Tote’n Mamas, a company that makes purses for carrying handguns. “It hasn’t caught up yet with the rest of society, but it’s a lot better. Thank God.”

Sales of her handbags, designed to enable women to draw within two seconds, have grown 1,000 percent in the past five years, Chisholm said.

While the U.S. gun rights debate rages, women see their weapons as empowering. At a time when the #MeToo movement has raised awareness of sexual assault, firearms are “the great equalizer,” said Dianna Muller, a retired police officer from Tulsa, Oklahoma, who is now a full-time professional shooter.

“Growing up, my generation of women have been told we can do anything that we want,” she said.