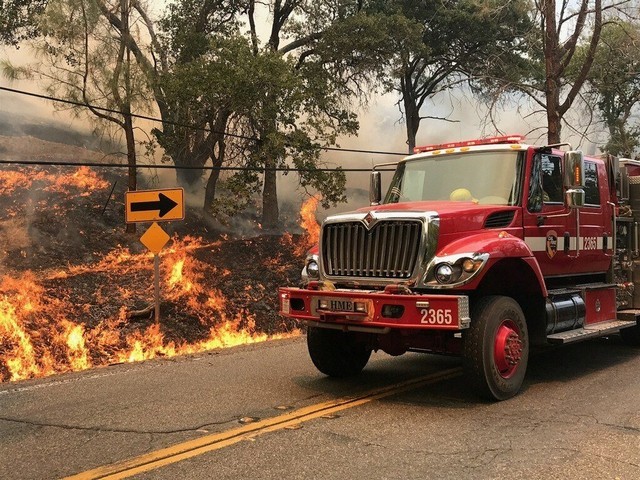 LOS ANGELES/DENVER (Reuters) – Firefighters in Northern California have made progress on a stubborn blaze west of Sacramento, allowing some residents to return to their homes after they were evacuated.

The so-called County Fire has consumed 86,000 acres (35,000 hectares) of grass, brush and dense scrub oak as of late on Wednesday, an increase of about 5 percent from earlier in the day, California Fire said.

Some residents were allowed to return home after being evacuated while the fire threatened some 1,500 homes, Cal Fire said in a statement on Wednesday.

A force of almost 3,500 firefighters widened its containment lines around to 27 percent up from 25 percent earlier in the day, the agency said.

Firefighters have been challenged by strong wind gusts, steep inaccessible terrain and dry vegetation as they have fought the unrelenting wildfire that began on Saturday.

No structures have been damaged so far, officials said.

The United States is experiencing an unusually active fire season, with the risk considered well above normal for many Western states, according to federal forecasters.

Temperatures in the area of the California blaze will reach close to 90 degrees Fahrenheit (32 Celsius) on Thursday, the National Weather Service said, warning of widespread haze and areas of smoke.

Wildfires have burned through nearly 2.5 million acres in the United States from Jan. 1 through Monday, well above an average of about 2.3 million for the same period over the last 10 years, according to the National Interagency Fire Center.

In Colorado, firefighters faced high temperatures, low humidity and gusty winds on Wednesday as they battled eight major blazes that have torched more than 140,000 acres in the drought-stricken state.

The largest wildfire, the Spring Fire, has consumed 95,739 acres in southern Colorado, destroying more than 100 homes, forcing evacuations of several communities and closing a road. That fire was just 5 percent contained.

The Spring Fire is the second-largest fire on record in Colorado, officials said.

Jesper Joergensen, a 52-year-old Danish national, is suspected of starting the fire and is being held on first-degree arson charges, the Costilla County Sheriff’s Office said. He is in the country illegally and may face deportation, police said.