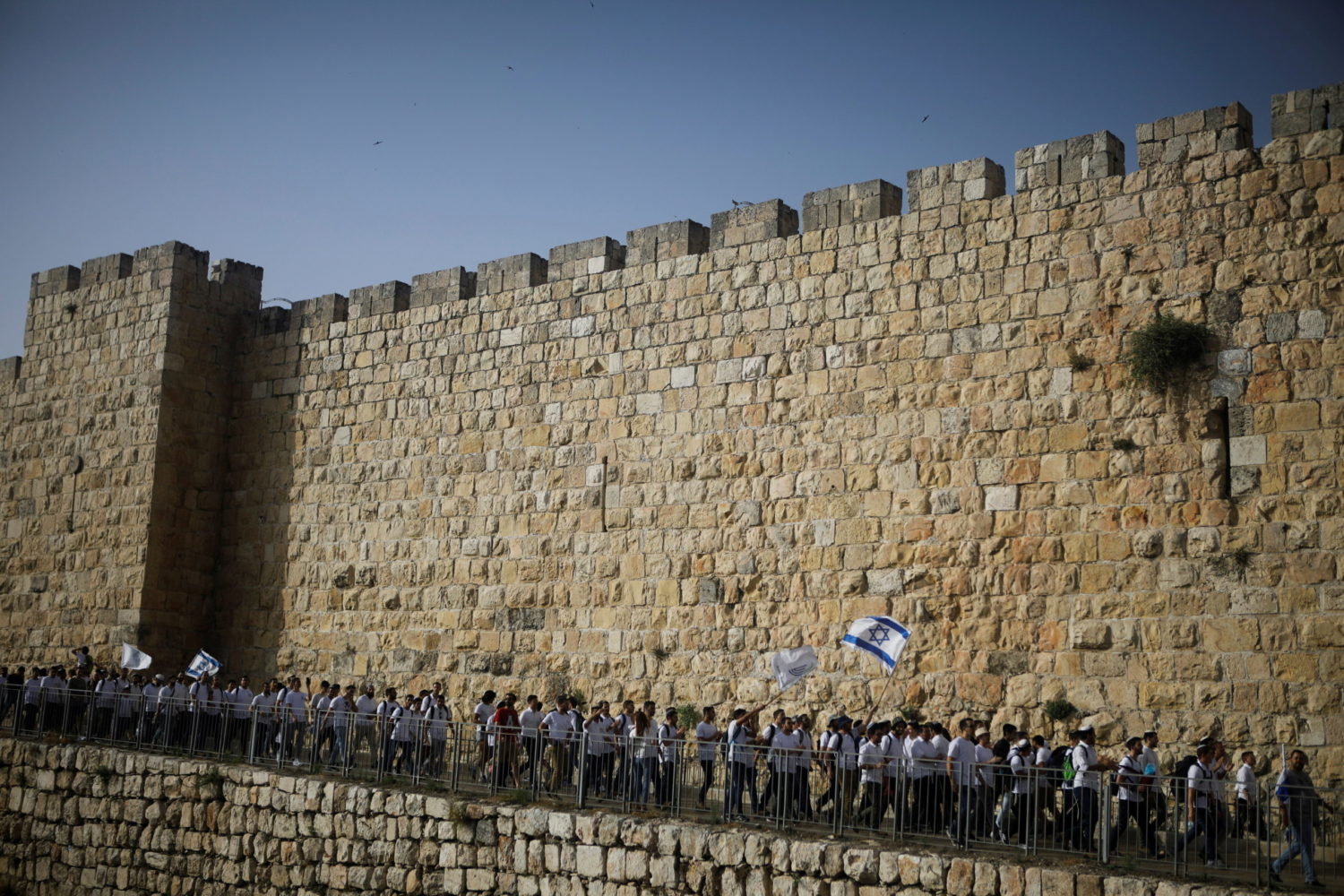 JERUSALEM (Reuters) -Israeli far right groups scrapped a planned march through Jerusalem’s Old City after police refused to authorize it amid fears it would rekindle strife that led to 11 days of intense fighting between Israel and Palestinian militants last month.

Several groups had planned a flag-waving procession through the walled Old City’s Damascus Gate and into its Muslim quarter this coming Thursday, drawing warnings from Gaza’s ruling Hamas movement of fresh hostilities should it go ahead.

The original march on May 10 was re-routed at the last minute as tensions around Jerusalem’s Al-Aqsa Mosque and the Sheikh Jarrah neighborhood, where Palestinian families face eviction, led Hamas to fire rockets towards the holy city.

Israel responded with air strikes, and the most serious cross-border fighting with Hamas in years raged for 11 days before a fragile ceasefire was achieved. Arab-Jewish violence also erupted in several Israeli cities.

Police said on Monday the permit was denied for Thursday’s march to proceed on the date and along the route planned by the organizers, and that an alternative procession would be considered if submitted.

Far-right lawmaker Itamar Ben Gvir said he would nonetheless march along the full route, accusing police of “capitulating to terrorism.”

A Hamas spokesman in Gaza said the police decision stemmed from Israel’s recognition of “the danger of crossing … red lines” set by the group over Israeli activity at sensitive sites in Jerusalem, and “consequences it may bring on the ground”.

It was not immediately clear if police made the move in consultation with Prime Minister Benjamin Netanyahu’s government, some of whose right-wing members have voiced support for the march as a show of Israel’s claim to sovereignty over East Jerusalem, disputed by Palestinians.

Israel’s Public Security Minister Amir Ohana, a member of Netanyahu’s right-wing Likud party, said on Twitter that the police ban should be reviewed by the government, floating the possibility that it could still be overturned.

Israel annexed East Jerusalem, in a move that has not won international recognition, after capturing the area in the 1967 Middle East war. It considers all of Jerusalem its capital.

Palestinians want East Jerusalem to be the capital of a state they seek to establish in the Israeli-occupied West Bank and the Gaza Strip.

Tensions are likely to remain high in Jerusalem even if the march does not go ahead. Protests have flared in Sheikh Jarrah, where Palestinian families face possible eviction after an Israeli court accepted Jewish settler land claims.

Israeli Attorney-General Avichai Mandelblit informed the Supreme Court that he would not intervene in the legal proceedings, paving the way for the court to issue a ruling widely expected to be in favor of the settlers. 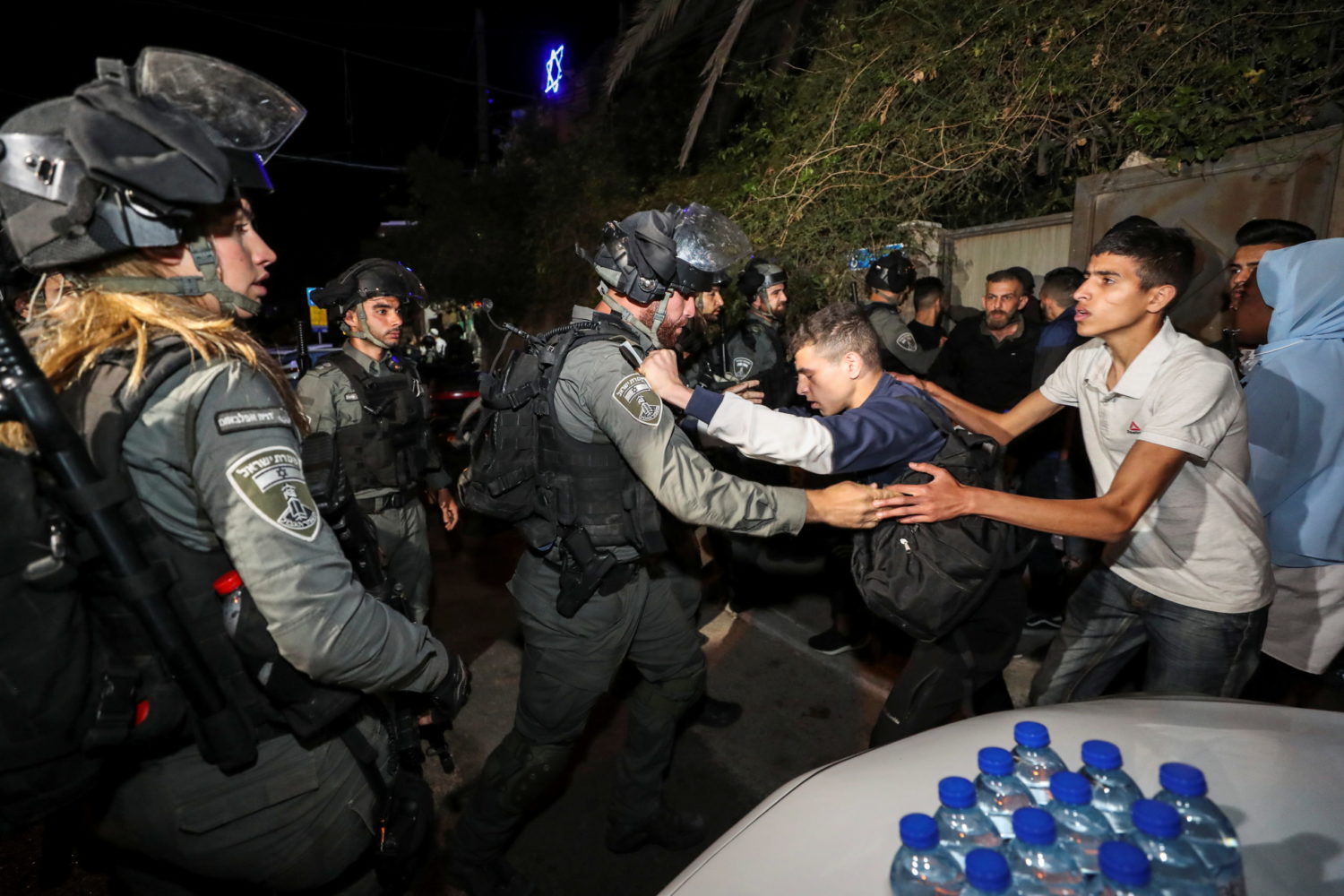 JERUSALEM (Reuters) – The troubles erupt after the evening meal that breaks the Ramadan fast, when Jewish settlers, guarded by Israeli police, and Palestinians trade abuse on the streets of East Jerusalem.

A long-running legal case, in which several Palestinian families face eviction from homes on land claimed by settlers, is at the heart of the confrontations during the Muslim holy month, with a key court session due to be held on Thursday.

“Go back to Jordan,” settlers shout in the Sheikh Jarrah neighborhood, a part of Jerusalem that Israel captured from its eastern neighbor in the 1967 Middle East war.

“Racists” and “mafiosi”, Palestinians yell back.

Over the past week, police in riot gear and on horseback have moved through Sheikh Jarrah, arresting Palestinian youths and using water cannon to spray foul-smelling liquid to disperse the crowds.

Sheikh Jarrah sits just outside Jerusalem’s walled Old City, near the famous Damascus Gate. The area includes many Palestinian homes and apartment buildings as well as hotels, restaurants and consulates.

Damascus Gate saw nightly clashes between Palestinians and Israeli police in April over a dispute over access to the gate’s amphitheater-style square.

Palestinian medics said 12 Palestinians have been injured since Sunday in the latest clashes, with three requiring hospital treatment. Police said Palestinian protesters have thrown rocks and firebombs at them during the demonstrations.

Sheikh Jarrah’s residents are overwhelmingly Palestinian, but the neighborhood also contains a site revered by religious Jews as the tomb of an ancient high priest, Simon the Just.

Thursday’s hearing at Israel’s Supreme Court may decide if the evictions ordered by a lower court are upheld, or if the handful of Palestinian families can appeal.

Human rights campaigners say that if the Palestinians lose the court battle, it could set a precedent for dozens of other homes in the area.

“They would have to kill us… that’s the only way we would leave,” Abdelfatteh Iskafi told Reuters.

Nuha Attieh, 58, said she fears her family will be next if the ruling is upheld.

“I’m scared for my home, for my kids, I’m scared about everything.”

A group of eight Israeli settler families living across the road from the houses they claim say the area was Jewish in the past, and the Israeli court had “decided that we can get back our houses”.

“This is a Jewish country. They want to control it,” one of the settlers told Reuters on Tuesday, pointing at the Palestinians on the other side of the street.

Giving only the name Eden, he added: “We have done nothing illegal. Arabs came from Jordan 50 years ago and should go back.”

The Palestinians say they have lived in Sheikh Jarrah since the 1950s, when they were re-housed there by Jordan after fleeing or being forced to abandon their homes in West Jerusalem and Haifa during fighting that surrounded Israel’s creation in 1948.

The settlers who filed the lawsuit said they legally bought the land from two Jewish associations that purchased it at the end of the 19th century, the Israeli anti-settlement group Peace Now said.

A lawyer representing the settlers declined to speak with Reuters.

The status of Jerusalem is at the heart of the Israeli-Palestinian conflict. Palestinians want East Jerusalem as the capital of a future state and most countries regard settlements that Israel has built there as illegal.

Israel claims all of Jerusalem as its capital, citing biblical and historical links to the city.