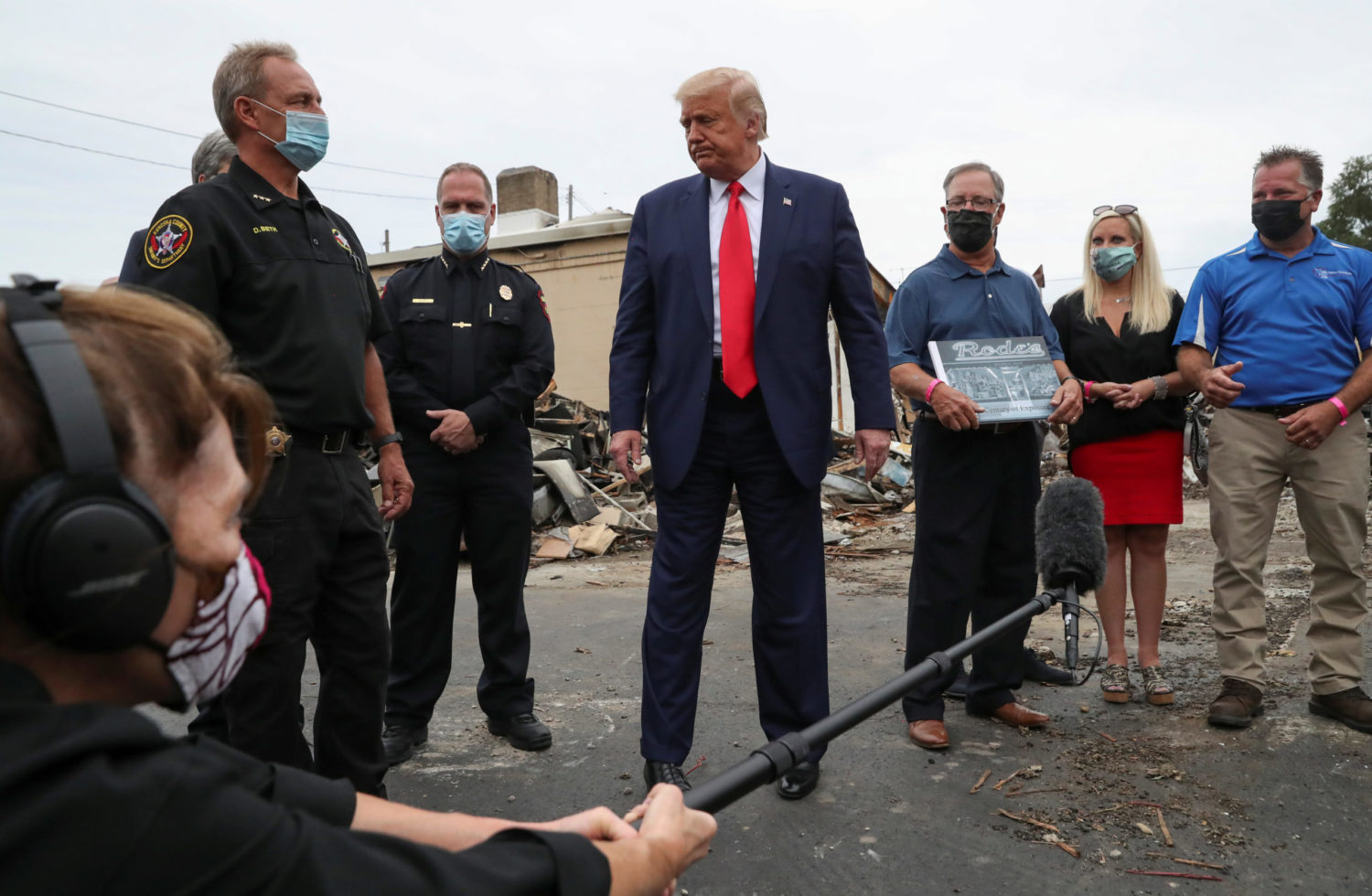 KENOSHA, Wis. (Reuters) – President Donald Trump defied requests to stay away and visited Kenosha, Wisconsin, on Tuesday, not to urge racial healing after a white officer shot a Black man in the back but to express support for law enforcement in a city rocked by civil unrest.

With the United States polarized over issues of racial injustice and police use of force, Trump is appealing to his base of white supporters with a “law and order” message as opinion polls show him cutting into the lead of his Democratic rival, former vice president Joe Biden.

Meanwhile Trump has largely overlooked the racial wounds caused by police use of force and played down the more than 180,000 U.S. deaths from the coronavirus pandemic.

The Republican president also threatened to send more federal officers into cities governed by Democratic mayors even if local officials objected, saying, “At some point … we’ll just have to do it ourselves.”

Trump did not visit Jacob Blake, who was paralyzed from the waist down after a white police officer fired at his back seven times on Aug. 23. He did not meet Blake’s family either, but did meet with his mother’s pastors.

He promised instead to rebuild Kenosha and provide more federal spending to Wisconsin, a political battleground state that Trump won narrowly in 2016 and badly needs to keep in his column as he seeks re-election on Nov. 3.

The president visited a burned-out furniture store that was destroyed in the upheaval and then a makeshift command center to praise National Guard troops who were called in to reinforce local police after several nights of peaceful protests gave way to looting, arson and gunfire.

“These are not acts of peaceful protest, but really domestic terror,” Trump told local business leaders in a high school gym.

Peaceful demonstrators have complained that violent agitators, often white, have hijacked their protests with property damage. But many have also sharply criticized the police, saying the United States needs to completely rethink its law enforcement practices.

“To stop the political violence, we must also confront the radical ideology. … We have to condemn the dangerous anti-police rhetoric,” Trump said, adding that without his help Kenosha would have “burned to the ground.”

APPEAL TO ‘CHANGE THE HEARTS’

The visit was not completely without empathy. While Trump dodged questions about systemic racism and problems in policing, he did say that he felt “terribly for anybody who goes through that,” referring to the police shooting, and that he was honored to meet with the co-pastors of Blake’s mother, the only two Black people at Trump’s round-table.

Pastor James Ward appealed for greater efforts to “change the hearts of people” and bring healing and peace to the community, while his wife and co-pastor Sharon Ward said, “I think it’s important to have Black people at the table to help solve the problem.”

The state’s Democratic governor and the city’s Democratic mayor both had urged Trump not to visit so as to avoid inflaming tensions and allow citizens to heal. But when he showed up, the president pledged $1 million in federal support to Kenosha law enforcement, $4 million to small businesses, and $42 million to public safety statewide, contrasting that with leftist calls to “defund the police.”

Much of the country has rallied to the side of civil rights since George Floyd, a Black man, died on May 25 after a white police officer knelt on his neck. The country was reckoning with that case when Blake was shot as he entered his car on Aug. 23.

Kenosha has become one of the flash-point cities where anti-racist demonstrators have clashed with Trump supporters who have converged on protest sites, sometimes openly carrying arms while vowing to protect property from looters.

A 17-year-old Trump supporter has been charged with killing two people and wounding another with a semi-automatic rifle in Kenosha. Trump defended the white teenager, who faces six criminal counts, and declined to condemn violence from his supporters.

But in Portland, Oregon, site of three months of nightly protests that have often turned violent, a Trump supporter was shot dead on Saturday and the president lamented that “they executed a man in the street.” 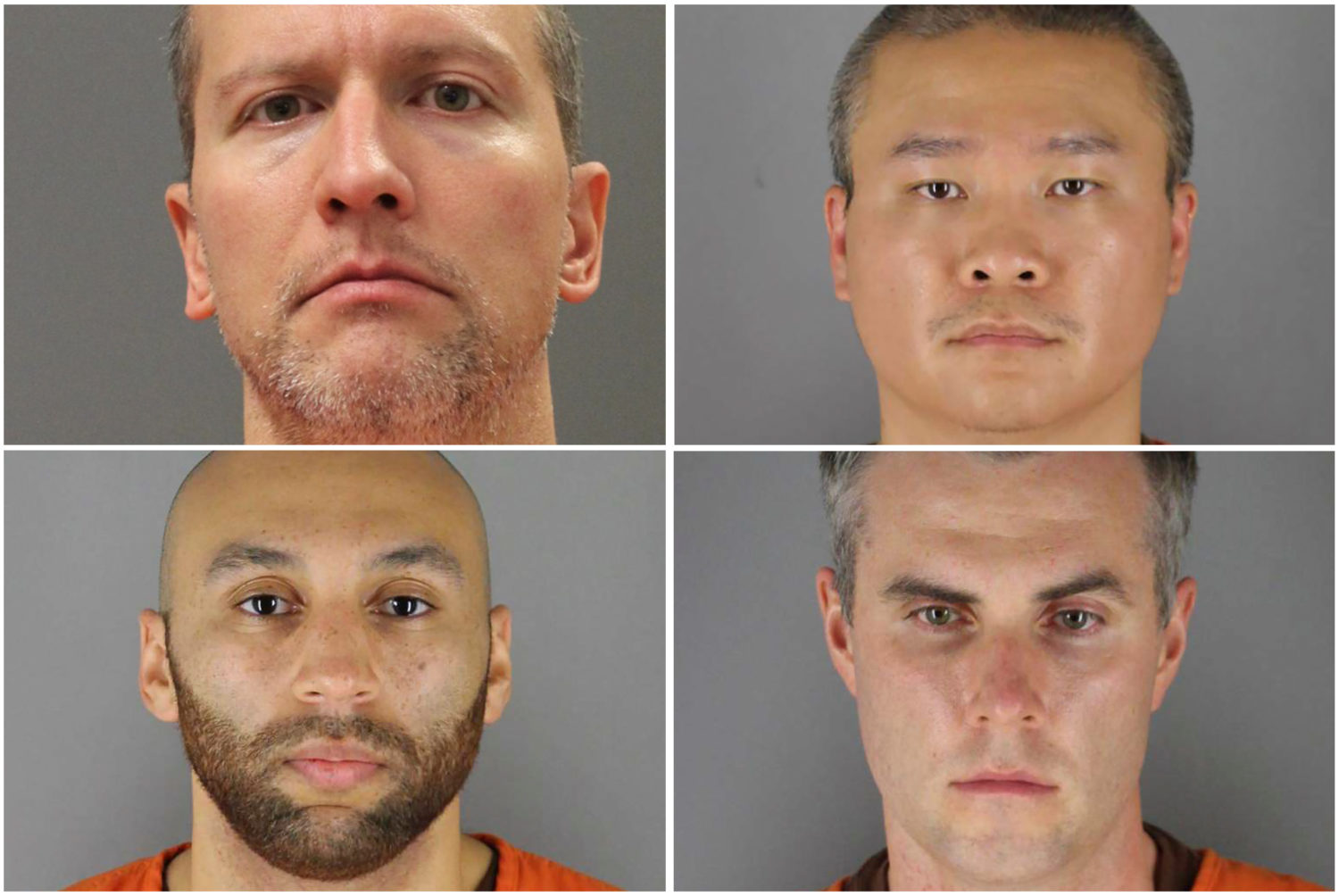 (Reuters) – The former Minneapolis police officer charged with the May 25 killing of George Floyd, and three other former officers charged in the case are expected to appear in court on Monday.

Derek Chauvin, 44, was arrested on May 29, four days after he pinned his knee into Floyd’s neck for nearly nine minutes, causing his death. He is facing a second-degree murder charge.

Three other former Minneapolis police officers, J. Alexander Kueng, Tou Thao and Thomas Lane, have been charged with aiding and abetting in the case. None of the officers have entered a plea.

Chauvin and Thao, 34, remain in custody, while Kueng, 26, and Lane, 37, have been released on conditional bond, according to jail records.

Monday’s court proceedings in Minneapolis will not be broadcast following a judge’s ruling on Friday. Chauvin will attend the hearing remotely via a video link, while the other three defendants will appear in person, according to the court’s website.

Earlier this month, the Minneapolis City Council unanimously passed a resolution to pursue a community-led public safety system to replace the police department.

The move came days after a veto-proof majority of the council voted to disband the police department in the wake of Floyd’s death.

The movement to “defund the police,” as some advocates have termed it, predates the current protests but it has won new support after a spate of recent killings of African Americans by white police officers that were caught on video.

In Atlanta, a white former police officer is in custody after he was charged with the murder in the shooting death of Rayshard Brooks, a Black man.

One of three officers involved in the shooting death of Breonna Taylor, a Black woman killed in a hail of gunfire when drug investigators burst into her home in Louisville, Kentucky, three months ago was dismissed from the police department last week.