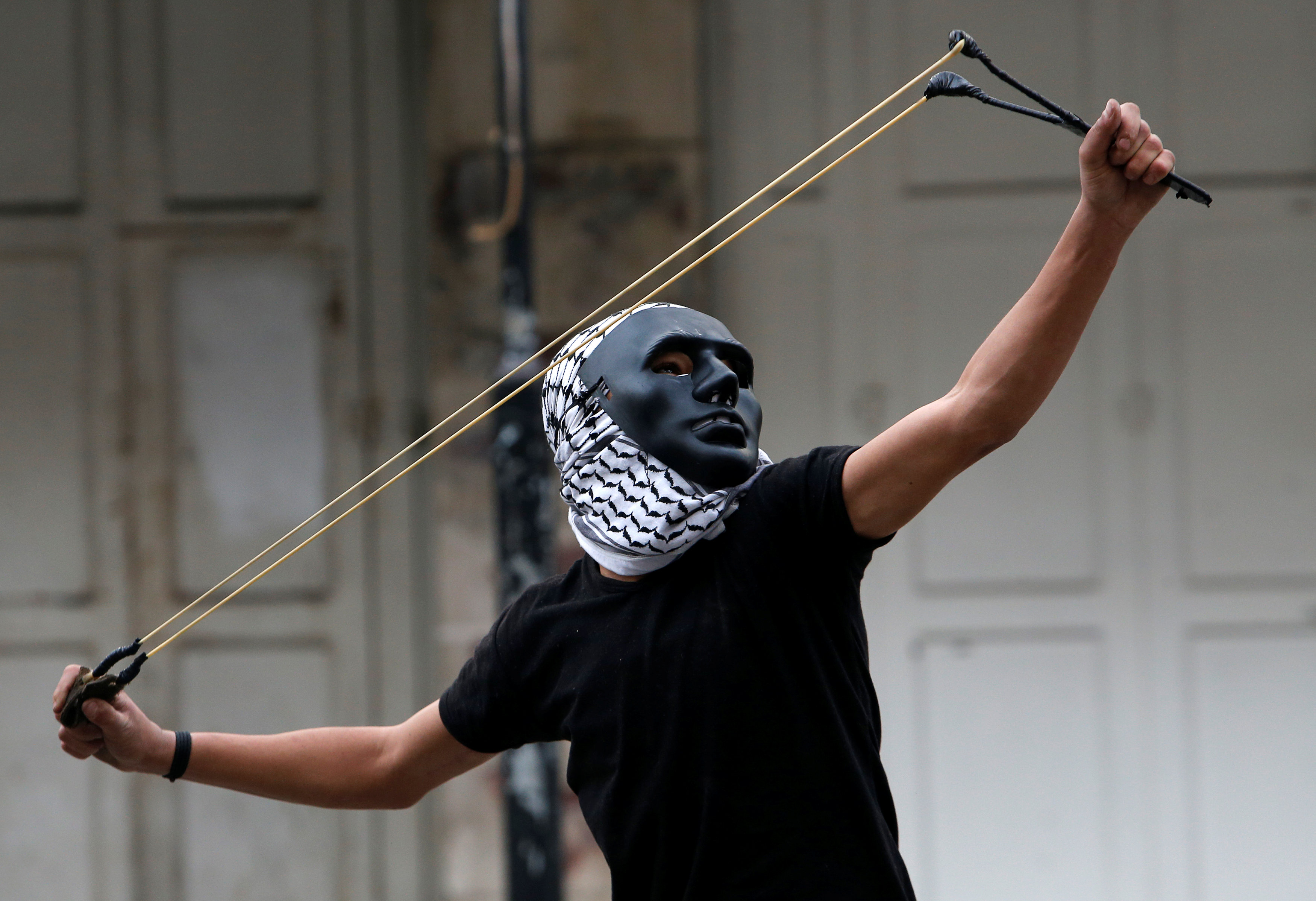 GAZA (Reuters) – Palestinians launched more anti-U.S. protests on Friday, and at least one demonstrator was killed in the Gaza Strip, a health official said, after the U.N. General Assembly rejected Washington’s recognition of Jerusalem as Israel’s capital.

Smoke billowed from burning tires at a demonstration in Bethlehem, in the occupied West Bank, two days before Christmas celebrations in the biblical town.

Israeli gunfire killed a 24-year-old Palestinian and wounded 10 other protesters during a stone-throwing demonstration in the southern Gaza Strip, a spokesman for the Palestinian Health Ministry there said. The Israeli military said it was checking the report.

One of the wounded, part of a crowd that approached the border fence chanting that U.S. President Donald Trump was a “fool” and a “coward”, was dressed as Santa Claus, witnesses said.

Protests erupted in all of the West Bank’s seven cities and in East Jerusalem. Health officials said at least five Palestinians were wounded by rubber bullets fired by Israeli security forces, who also used tear gas.

Defying the United States on Thursday, the U.N. General Assembly approved a resolution calling for the United States to drop its Dec. 6 recognition of Jerusalem, a city revered by Jews, Muslims and Christians, as Israel’s capital.

Palestinian President Mahmoud Abbas, in a Christmas message, condemned Trump’s reversal of a decades-old U.S. policy on Jerusalem “an insult to millions of people worldwide, and also to the city of Bethlehem”.

Israel considers Jerusalem its eternal and indivisible capital. Palestinians want the capital of an independent Palestinian state to be in the city’s eastern sector, which Israel captured in the 1967 Middle East War and annexed in a move never recognized internationally.

Most countries regard the status of Jerusalem as a matter to be settled in an eventual Israeli-Palestinian peace agreement, although that process is now stalled.

Nine countries voted against the U.N. resolution and 35 abstained. Twenty-one countries did not cast a vote.

Sami Abu Zuhri, a spokesman for Gaza’s dominant Hamas Islamists, called the U.N. vote a defeat for Trump, while Israeli Prime Minister Benjamin Netanyahu rejected it as “preposterous” and branded the U.N. a “house of lies”.

But Michael Oren, Israel’s deputy minister for diplomacy, seemed to play down the support for the resolution shown by many countries Israel considers friends.

“We have an interest in tightening our bilateral relations with a long list of countries in the world, and expect and hope that one day, they will vote with us, or for us in the United Nations,” Oren said on Tel Aviv radio station 102 FM.

“But I am not prepared to suspend all cooperation with important countries, such as India,” he said. Netanyahu, who hosted Indian Prime Minister Narendra Modi in July, is due to visit New Delhi next month.

Friday’s death in Gaza raised to nine the number of Palestinians killed by Israeli gunfire during the demonstrations, Palestinian health officials said, and dozens have been wounded. Two militants were killed in an Israeli air strike in Gaza after a rocket attack. There have been no Israeli fatalities or significant injuries.

“The fact that live ammunition has been used during protests in Gaza and the West Bank is particularly shocking,” it said.

In the run-up to the U.N. vote, Trump threatened to cut off financial aid to countries that supported the resolution. His warning appeared to have some impact, with more countries abstaining and rejecting the document than usually associated with Palestinian-related resolutions.

But most of the European Union, Israel’s biggest trading partner, and countries such as Greece, Cyprus and India, with which Netanyahu has pursued closer relations and economic ties, backed the resolution.

Asked if Israel wanted the United States to cut aid to countries that endorsed the resolution, Oren said: “I prefer … that if there’s room for revenge, it be directed towards the United Nations and not the U.N.’s members.”

He said he supported cutting U.S. contributions to the U.N. and perhaps relocating its New York headquarters, noting it occupies “some of the most valuable real estate in New York”.

(Additional reporting by Ali Sawafta in Ramallah and Michelle Nichols at the U.N.; Writing by Jeffrey Heller; Editing by Andrew Roche)