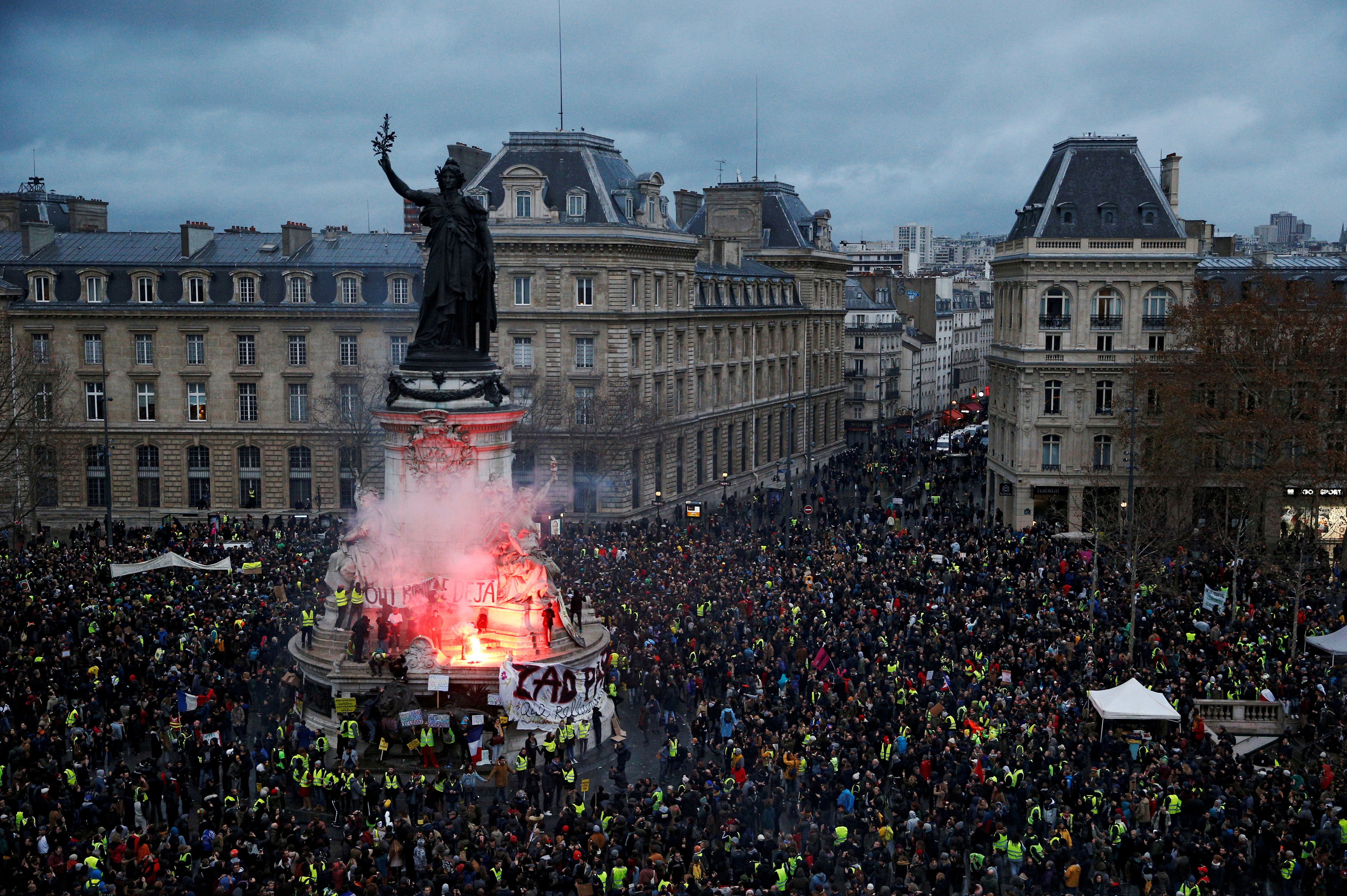 PARIS (Reuters) – France’s “yellow vest” protests have exposed a deep-rooted belief that society is not working for large swathes of the French population, especially outside major cities.

Driving the unrest is anger about rising living costs – particularly among low-paid workers – and a perception that President Emmanuel Macron is deaf to their needs as he presses on with reforms seen as favoring the wealthy.

The following graphics look at underlying economic and social indicators in France to try to explain why so many people believe the system is working against them.

IS THE FRENCH WELFARE SYSTEM GENEROUS?

Without welfare transfers, poverty and inequality in France would be among the highest in developed countries belonging to the Organisation for Economic Co-operation and Development, the Paris-based group estimates.

While many protesters rail against what they see as a gulf between them and the upper echelons of French society, OECD data suggests that the wealth divide is not as bad as in many other rich countries.

France’s extensive welfare system keeps the poverty rate at 14.3 percent, below the 18 percent OECD average and on a par with Scandinavian countries known for their egalitarianism.

Without tax and welfare payouts, nearly 42 percent of the population would be living in poverty, the highest rate among OECD countries for which recent data is available.

Likewise, France’s Gini coefficient, a gauge of income inequality, is slightly below the OECD average whereas without welfare transfers it would be among the highest, just behind Italy, Portugal and Greece, according to OECD data.

While a progressive tax system and generous welfare help narrow the wealth gap, it comes at a price as French taxpayers also bear the highest tax burden in the world.

Tax cuts on wealth and financial assets early on in Macron’s five-year term have added to middle-class taxpayers’ frustration and he has been criticized as being a president of the rich.

WHY DO MANY FEEL LEFT BEHIND?

Unlike Scandinavian countries, France’s poor have little hope of improving their lot in life despite the billions of euros the government spends on them, according to OECD data.

The OECD estimates it would take six generations for a person from a low-income family in France to reach an average income compared with only two generations in Denmark and an OECD average of 4.5.

“There are no rungs anymore on France’s social ladder,” Finance Minister Bruno Le Maire, a conservative, said on Monday.

While six generations is on a par with its neighbor Germany, the French have a deep attachment to the idea that state institutions, from schools to courts to government, are supposed to offer the same chance of success to all.

But despite income support for those on low incomes, they have little chance of doing better than their parents, according to a study last year by France Strategie , which is linked to the prime minister’s office.

The study found that a person whose father was a senior white-collar worker was 4.5 times more likely to belong to the wealthiest fifth of the population than someone whose father was a manual worker – largely because social origin correlates closely with one’s level of education.

While France is close to the average in international education comparisons, it has a bigger gulf between the scores of the lowest and highest performing upper school students, the OECD’s director of social affairs Stefano Scarpetta said.

WHY DO PEOPLE FEEL UNDER FINANCIAL PRESSURE?

The protests originally erupted in November over higher fuel taxes, that have since been scrapped, and general frustration about the high cost of living, sparking the worst street violence Paris has seen in decades.

With people on low incomes surviving on welfare handouts and the lower middle class squeezed by the tax burden, the French are highly sensitive to pressure on their daily budgets.

That helps explain a national obsession with purchasing power and French politicians are frequently judged on whether people are getting more spare cash.

While protesters largely ignored new tax breaks to boost purchasing power, official data lends credence to their claims that budgets are getting squeezed.

The pressure is increasingly coming from housing costs, which now absorb 23 percent of their budgets compared with 10 percent a generation ago, according to the official French statistics agency INSEE.

Meanwhile, a lack of jobs, deindustrialization and dwindling public services mean that discontent is highest in smaller towns cut off from the economic opportunities of bigger cities.

In towns of 5,000-10,000 people, 21 percent report below average life satisfaction compared to 14 percent in the capital Paris, INSEE said in a study this week.