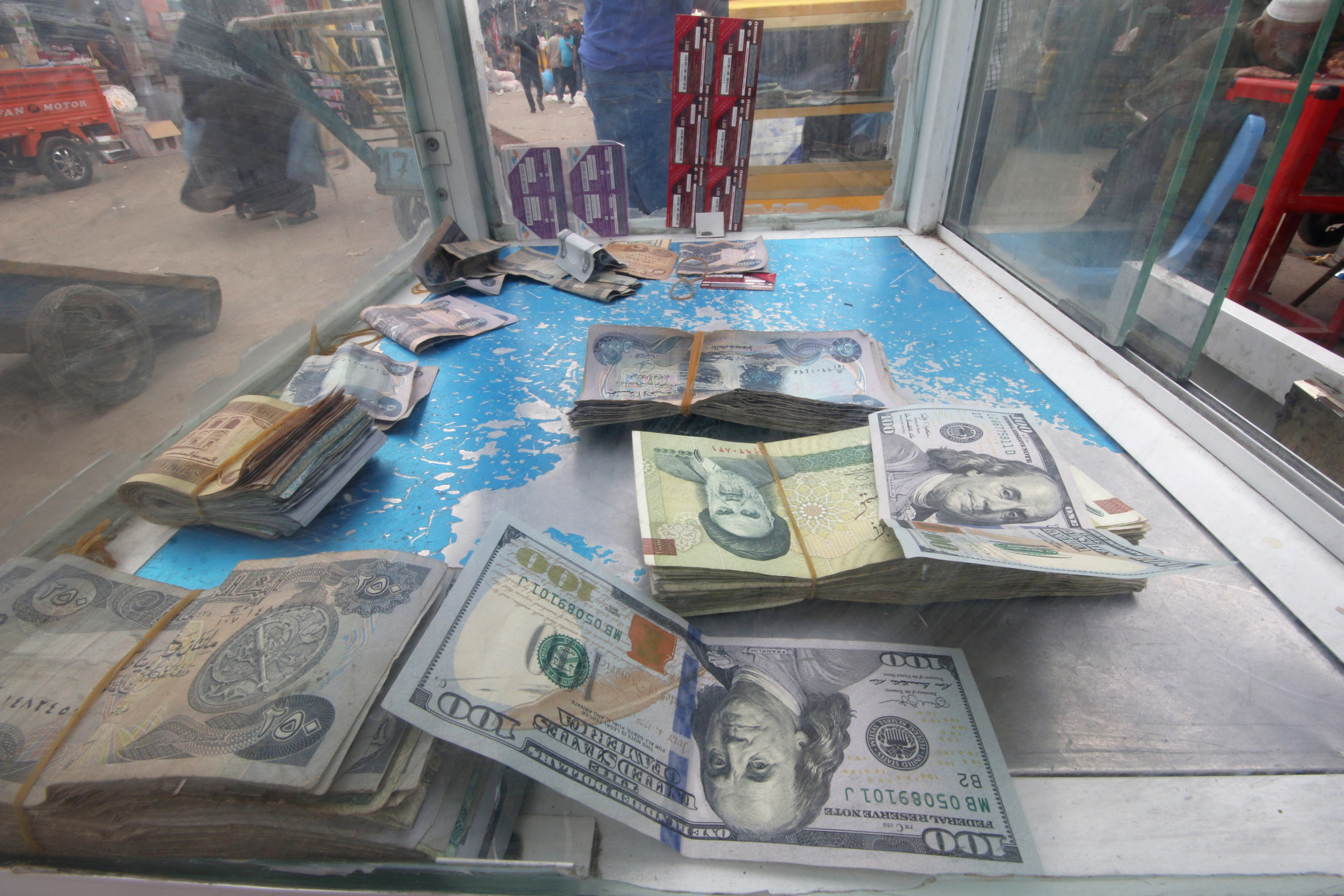 GENEVA (Reuters) – More Iranians are using social media to vent anger at what they see as the corruption and extravagance of a privileged few, while the majority struggles to get by in an economy facing tighter U.S. sanctions.

The country has been hit by a wave of protests during the last year, some of them violent, but as economic pressures rise, people are increasingly pointing fingers at the rich and powerful, including clerics, diplomats, officials and their families.

One person channeling that resentment is Seyed Mahdi Sadrossadati, a relatively obscure cleric who has amassed 256,000 followers on his Instagram account with a series of scathing posts aimed at children of the elite.

In one recent post, he blasted the “luxury life” of a Revolutionary Guards commander and his son, who posted a selfie online in front of a tiger lying on the balcony of a mansion.

Openly criticizing a well-known member of the powerful military unit that answers to Supreme Leader Ayatollah Ali Khamenei is in itself an unusual act of defiance.

“A house tiger? What’s going on?” Sadrossadati wrote. “And this from a 25-year-old youth who could not gain such wealth. People are having serious difficulty getting diapers for their child.”

The Iranian rial currency has hit 149,000 to the U.S. dollar on the black market used for most transactions, down from around 43,000 at the start of 2018, as U.S. President Donald Trump vowed to pull out of the nuclear deal between Tehran and world powers aimed at curbing its nuclear program.

That has sent living costs sharply higher and made imports less accessible, while the threat of financial punishment from the United States has prompted many foreign companies to pull out of Iran or stay away.

The situation could get worse, as additional sanctions come into force this week.

Wary of growing frustration over the relative wealth of a few among the population of 81 million, Khamenei has approved the establishment of special courts focused on financial crimes.

The courts have handed out at least seven death sentences since they were set up in August, and some of the trials have been broadcast live on television.

Among those sentenced to death was Vahid Mazloumin, dubbed the “sultan of coins” by local media, a trader accused of manipulating the currency market and who was allegedly caught with two tons of gold coins, according to the Iranian Students’ News Agency (ISNA).

The tough sentences have not been enough to quell frustration, however, with high profile officials and clerics in the firing line.

“Because the economic situation is deteriorating, people are looking for someone to blame and in this way get revenge from the leaders and officials of the country,” said Saeed Leylaz, a Tehran-based economist and political analyst.

Washington is likely to welcome signs of pressure on Iran’s political and religious establishment, as it hopes that by squeezing the economy it can force Tehran to curb its nuclear program and row back on military and political expansion in the Middle East.

Public anger among Iranians has been building for some time.

Demonstrations over economic hardships began late last year, spreading to more than 80 cities and towns and resulting in at least 25 deaths.

In addition to his written contributions, Sadrossadati has posted videos of debates between himself and some of those he has criticized.

In one, he confronted Mehdi Mazaheri, the son of a former central bank governor who was criticized online after a photograph appeared showing him wearing a large gold watch.

In a heated exchange, Sadrossadati shouted: “How did you get rich? How much money did you start out with and how much money do you have now? How many loans have you taken?”

Mazaheri, barely able to get in a reply, said he would be willing to share documents about his finances.

Children of more than a dozen other officials have been criticized online and are often referred to as “aghazadeh” – literally “noble-born” in Farsi but also a derogatory term used to describe their perceived extravagance.

High-profile clerics have also been targeted.

Mohammad Naghi Lotfi, who held the prestigious position of leading Friday prayers at a mosque in Ilam, west Iran, resigned in October after he was criticized on social media for being photographed stepping out of a luxury sports utility vehicle.

Facebook posts labeled Lotfi a hypocrite for highlighting ways that ordinary Iranians could get through the economic crisis during his speeches. The outcry was a major factor in his decision to resign from a post he had held for 18 years.

“The hype that was presented against me in this position … made me resign, lest in the creation of this hype the position of the Supreme Leader of the Islamic Revolution be damaged,” Lotfi told state media after stepping down.

“The issue of the vehicle … was all lies that they created in cyberspace,” he added.

He was one of at least four clerics in charge of Friday prayers who have resigned in the last year after being accused on social media of profligacy or financial impropriety. 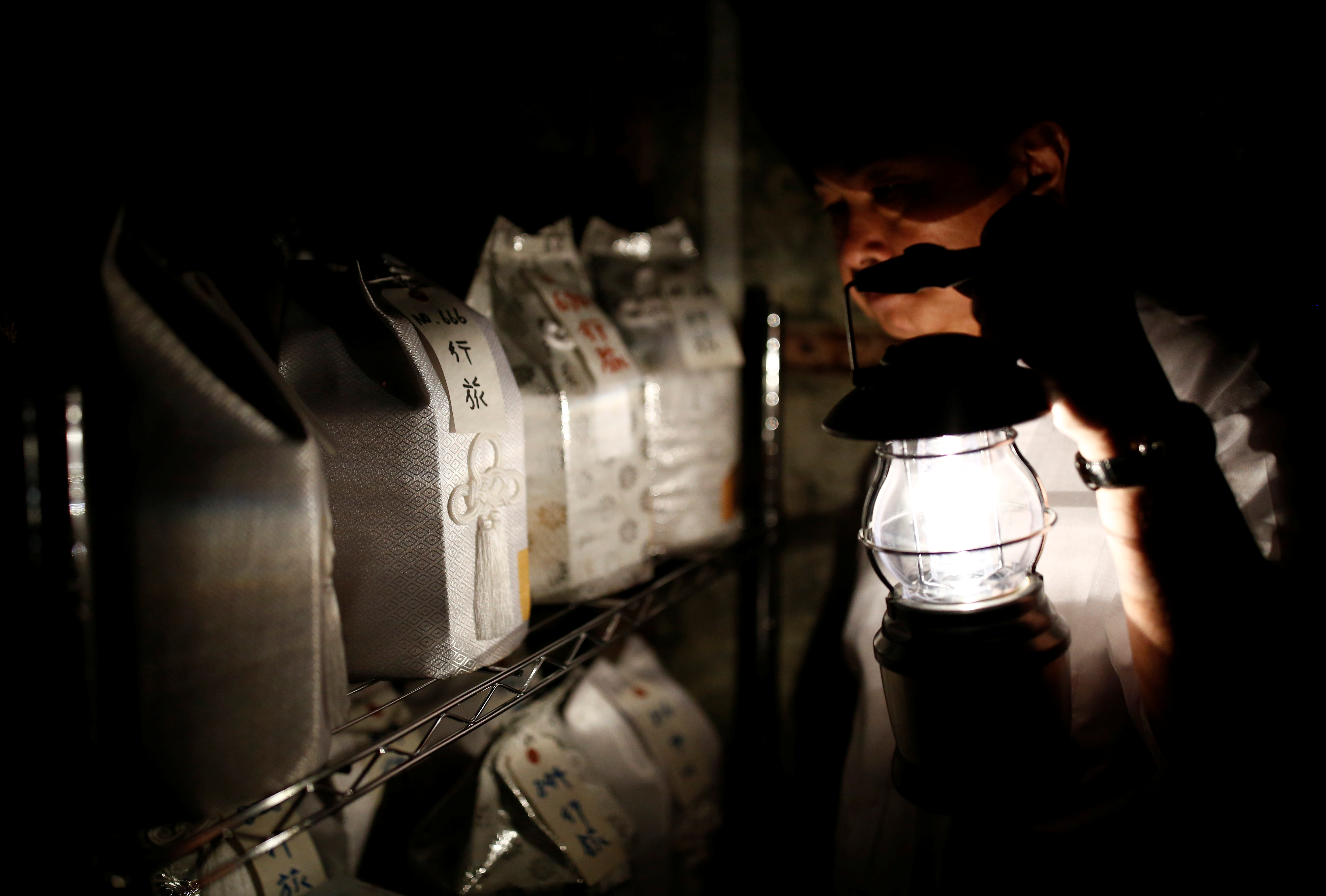 YOKOSUKA, Japan (Reuters) – Unclaimed urns containing ashes of the dead are piling up by the thousands across Japan, creating storage headaches and reflecting fraying family ties and economic pressures in a rapidly aging nation.

The identities of the dead, cremated at public expense, are usually known. But in most cases, relatives either refuse or don’t respond to requests to collect their remains. Burials can be costly and time-consuming, a burden on family members who may hardly know the deceased relative.

It is a problem that is likely to grow, experts say; deaths in Japan are projected to rise from 1.33 million a year to 1.67 million by 2040, even as the overall population drops.

Yokosuka was so overwhelmed with unclaimed urns that it ran out of space in a 300-year-old charnel house that was about to collapse. It combined ashes of different people into a much smaller number of urns that it now stores in a hillside cave, with about 50 newer urns accumulating at the city office.

“Space to store them is running out,” said Hitomi Nakamura, an official in Saitama city, north of Tokyo, where the number of unclaimed urns has grown sharply the last few years to more than 1,700.

“Many elderly people are living on welfare,” he added, “and many of them may be estranged from their families.”

With Japanese wages barely growing, and many children of the elderly living on pensions themselves, managing death costs, including arranging for their burial, can be a burden.

A traditional funeral, including food, drinks and gifts for guests, and hiring a Buddhist monk to chant sutras, can cost 2 million yen ($17,800) or more, industry sources say.

New businesses have sprung up offering no-frills funerals for $2,000 to $4,000, but other costs can add up, including the hundreds of dollars it may cost to bury the urn at a temple or cemetery.

There are more elderly poor than in years past, some of whom cannot afford their own funerals. Nearly 3 percent of elderly were on welfare in 2015, almost double the rate two decades earlier, government statistics show. Just over half of all Japanese on welfare are 65 or older.

“There are more people who die alone, with no one to look after cremated remains because of weaker family relationships,” said Hisako Makimura, a visiting professor of sociology at Kansai University.

In decades past, it was not uncommon for three generations of family to live together. But experts say that as Japan’s economy has changed, couples have fewer children, and people tend to move farther from home for work, among other factors.

Nearly 6,000 urns have accumulated in the southern city of Fukuoka, while Osaka, in western Japan, buried the remains of 2,366 people in a communal grave this year after no one claimed them after one or two years.

The number of Japanese age 65 and older will swell from 28 percent of the population to 36 percent by 2040, according to the government-backed National Institute of Population and Social Security Research.

“Families and communities used to play roles of taking care of deceased people,” Makimura said. “But the burden on local governments will likely grow as their involvement in dealing with the dead increases.”

In Yokosuka, more elderly are dying without leaving funeral instructions or information about relatives.

City officials comb through their homes and census registries, and try to contact family members through the mail, often to no avail.

“The dead are ordinary citizens. It could happen to anyone,” said Kazuyuki Kitami, a city official. “These bones are warning those of us who are alive that we are poorly prepared.”

Noticing that many unclaimed remains were from poor elderly people, Yokosuka in 2015 started an “ending plan support” service for low-income residents with no immediate family members.

Individuals pay at least a fifth of the 250,000 yen cremation and burial costs, with the government covering the rest. Dozens have signed up, and in May the city made similar services available to anyone. 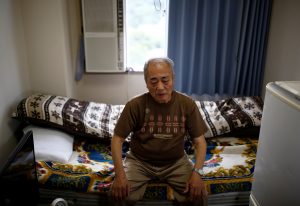 Sumitaka Haraguchi sits on a bed in a room of a nursing home where he lives during an interview with Reuters in Yokosuka, Japan September 11, 2018. REUTERS/Kim Kyung-Hoon

“I feel so relieved,” said Sumitaka Horiguchi, 80, after signing up for the service and ensuring he will be buried at a local temple.

Horiguchi never married and hasn’t seen his three step-siblings in many years, so he worried what would happen to his remains when he died.

“My days have changed,” he said from his nursing home. “I feel calm.”

(Corrects spelling of man’s name in 23rd and 24th paragraphs to “Horiguchi” not “Haraguchi”.)