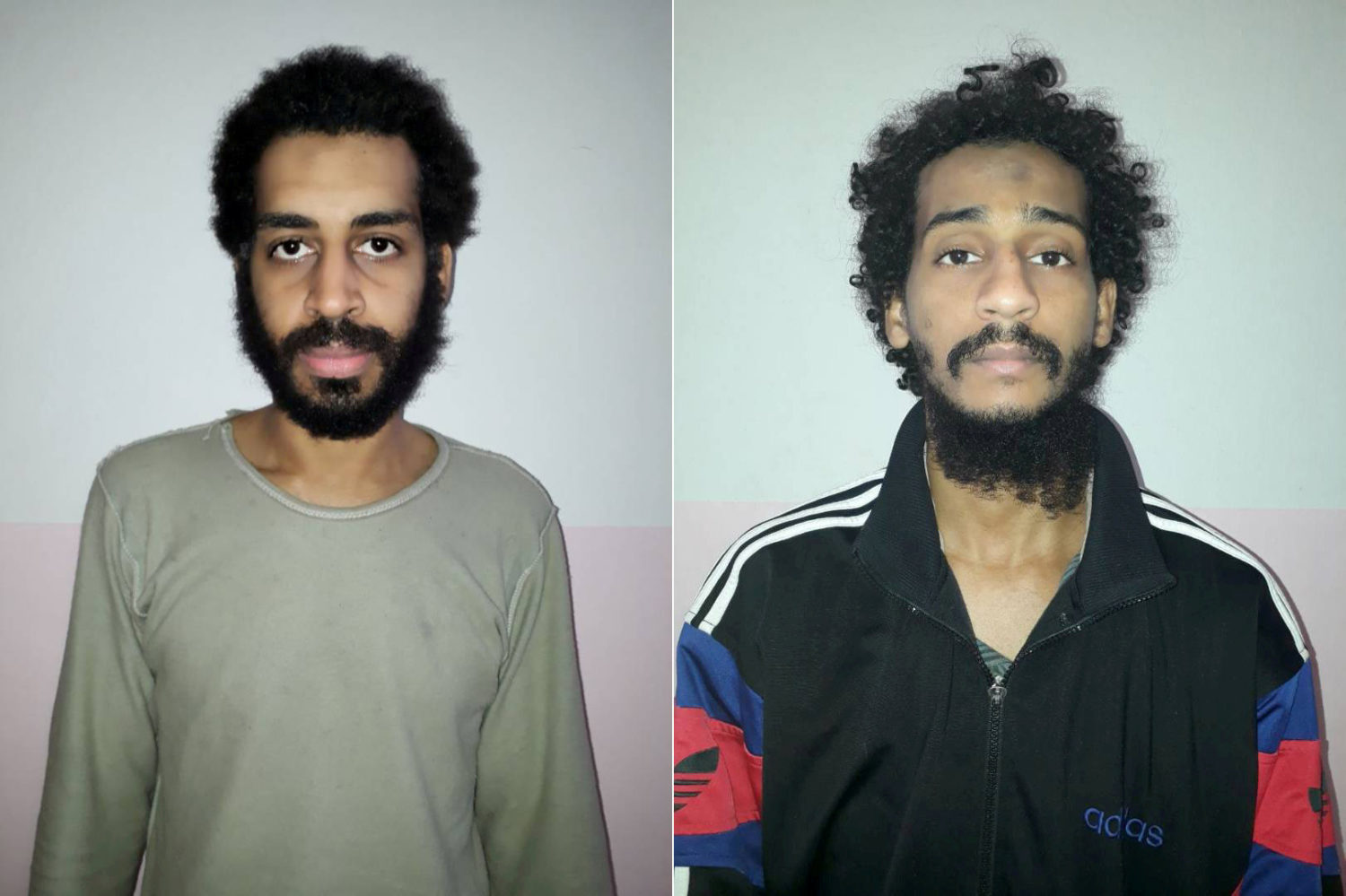 WASHINGTON (Reuters) – Two alleged Islamic State militants known as the ‘Beatles’ will arrive in the United States on Wednesday to face trial on U.S. charges for their alleged involvement in beheadings of American hostages in Syria, the U.S. Department of Justice said.

The alleged militants, Alexanda Kotey and El Shafee Elsheikh, have been in U.S. military custody abroad since they were captured in 2019. They grew up in Britain and were UK citizens, but the British government withdrew their citizenship.

The pair are suspected of membership in a four-strong Islamic State cell known as the ‘Beatles’ because of their British accents. The group is alleged to have detained or killed Western hostages in Syria, including U.S. journalists James Foley and Steven Sotloff and aid workers Kayla Mueller and Peter Kassig.

“These charges are the product of many years of hard work in pursuit of justice for our citizens slain by ISIS. Although we cannot bring them back, we can and will seek justice for them, their families, and for all Americans,” Attorney General William P. Barr said in a statement.

In order to secure British help in obtaining evidence on the pair, Barr agreed that U.S. prosecutors would not seek the death penalty in any cases against them and would not carry out executions if they were imposed.

The pair were held in Iraq by the U.S. military for around a year and are now in FBI custody, Assistant Attorney General for National Security John Demers told a news conference.

“As for their ringleader, Mohamed Emwazi (infamously known as Jihadi John), he faced a different type of American resolve – the mighty reach of our military, which successfully targeted him in an airstrike several years ago,” Demers said.

“Their goal is to motivate people to launch attacks against Western targets wherever they are, using any means available,” Wray said.

Wray and Demers said the support of the British government was critical to moving the investigation and prosecution forward.

The families of Foley, Kassig, Mueller and Sotloff welcomed the news.

“James, Peter, Kayla and Steven were kidnapped, tortured, beaten, starved, and murdered by members of the Islamic State in Syria,” they said in a joint statement.

“Now our families can pursue accountability for these crimes against our children in a U.S. court.”

If convicted, Kotey and Elsheikh could face up to life in prison. The two are expected to appear in federal court in Alexandria, Virginia, on Wednesday afternoon, officials said. 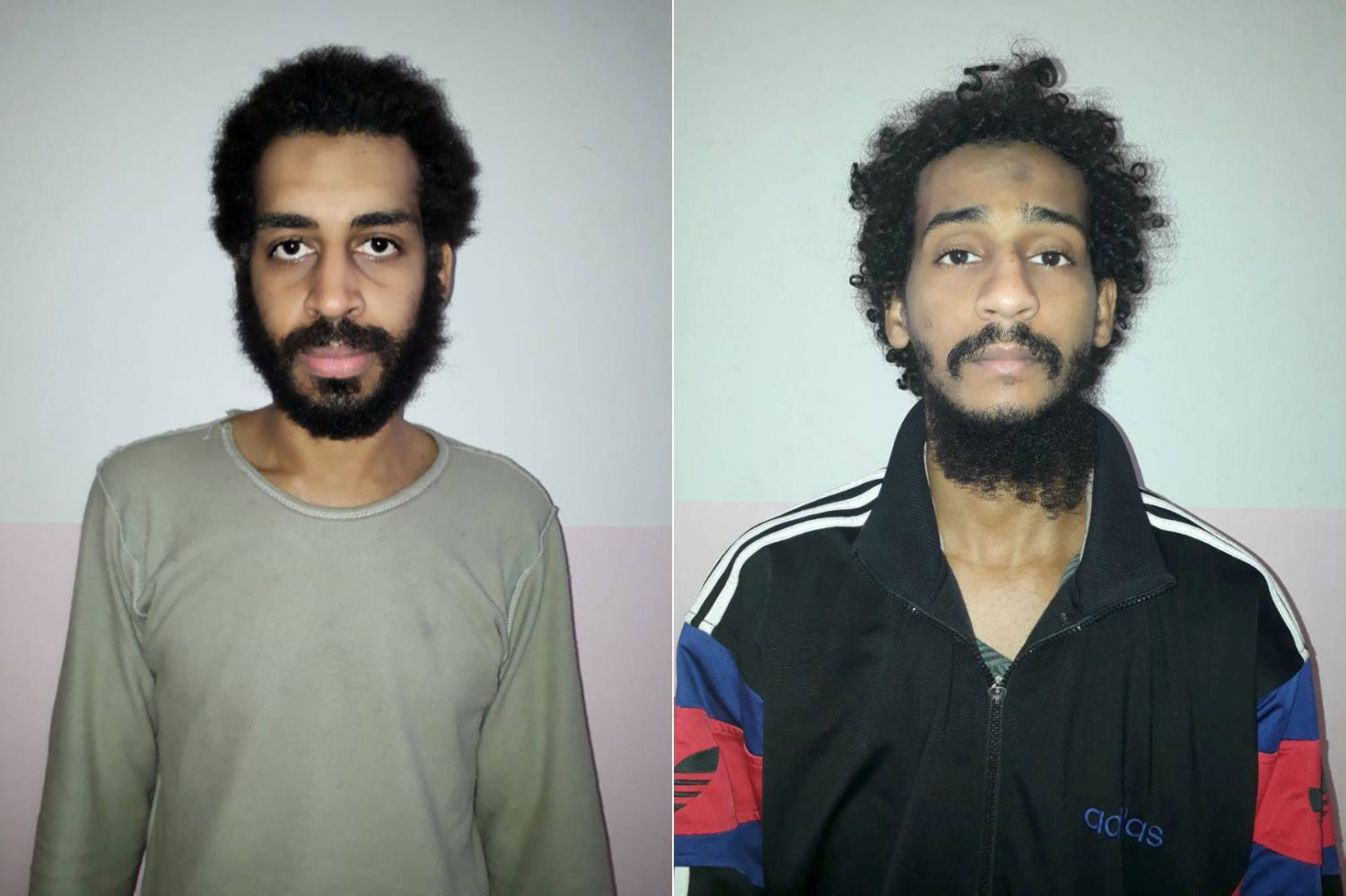 LONDON (Reuters) – Britain’s Supreme Court on Wednesday lifted a bar which prevented the government from giving evidence to U.S. authorities about an alleged Islamic State execution squad, nicknamed “the Beatles”, after reassurances were given that the men would not face the death penalty.

The U.S. Department of Justice is seeking the extradition of Britons Alexanda Kotey and El Shafee Elsheikh, who are accused of the killing and torture of Western hostages in Syria.

U.S. Attorney General William Barr said last week that U.S. prosecutors would not seek the death penalty against the men or carry out executions if they were imposed, an issue which had been a stumbling block for Britain handing over captured militants.

In March, Britain’s Supreme Court had ruled that data protection laws meant Britain could not provide material to the United States or other foreign countries in cases which could lead to a death penalty. That decision followed legal action brought by Elsheikh’s mother, Maha El Gizouli.

The British courts imposed a block on the transfer of evidence while her case was ongoing. But the Supreme Court said it had released an order on Wednesday which formally ended El Gizouli’s action and thus ended the legal prohibition.

“The order concludes the proceedings in the Supreme Court, which means that the stay or the stop on providing material to the U.S. government is removed,” a court spokeswoman said.

There was no immediate response from Britain’s Home Office (interior ministry).

Kotey and Elsheikh are being held by the U.S. military in an unidentified overseas location after they were captured in 2019 but Barr said it was becoming untenable to continue to hold them.

The pair were members of a four-strong Islamic State unit that was known as the Beatles because they were English speakers.

They are alleged to have detained or killed Western hostages, including U.S. journalists James Foley and Steven Sotloff and aid workers Kayla Mueller and Peter Kassig.

One member, Mohammed Emwazi, known as “Jihadi John”, was believed to have been killed in a 2015 U.S.-British missile strike.

The U.S. Justice Department wants Britain to turn over evidence it has on Kotey and Elsheikh to allow them to be tried in the United States.

Barr had said if Britain did not turn over the material by Oct. 15, the United States would turn over the men for prosecution in the Iraqi justice system.