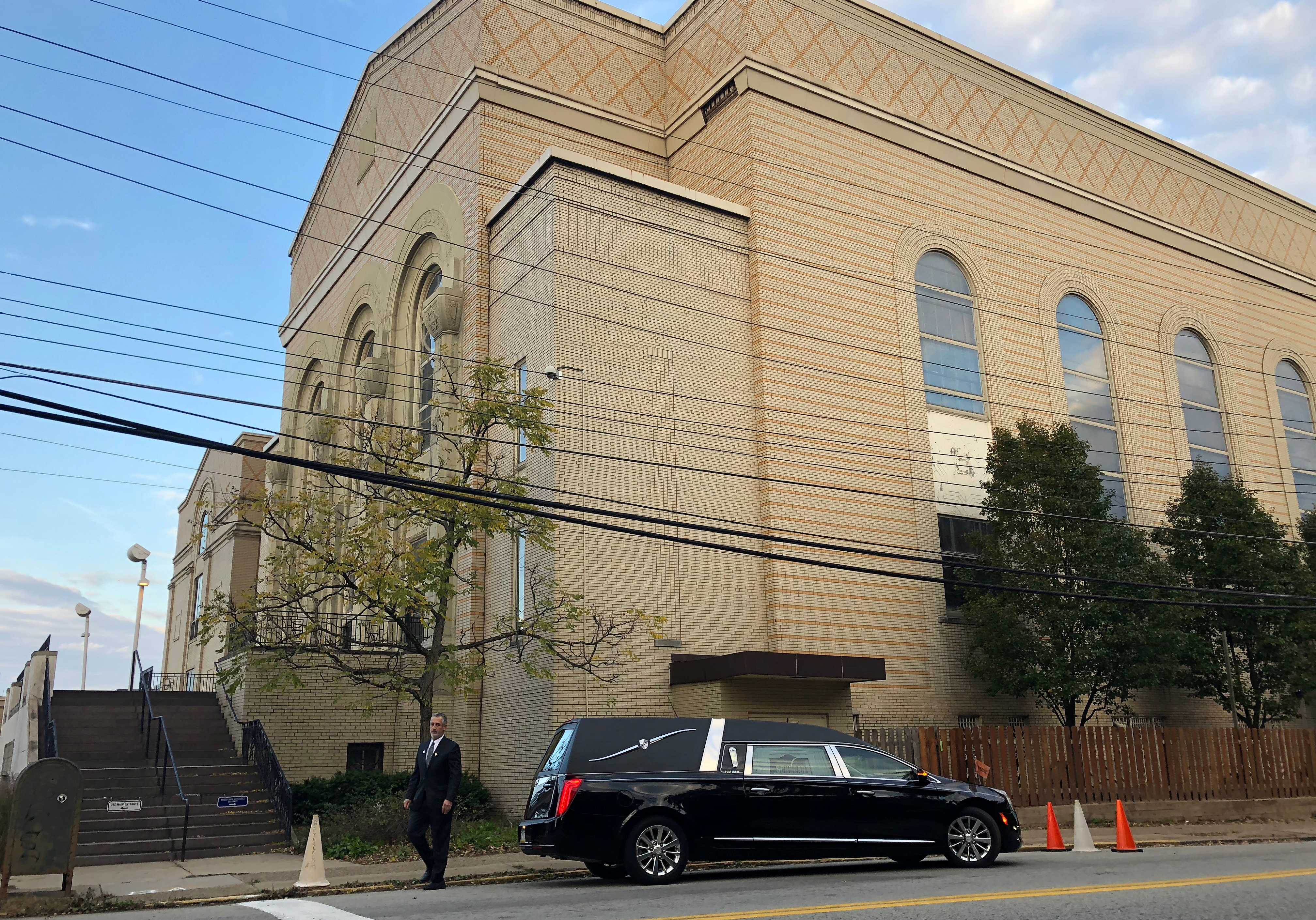 By Jessica Resnick-Ault and Chriss Swaney

PITTSBURGH (Reuters) – Pittsburgh began holding three more funerals on Wednesday for Jewish victims of a shooting rampage at a synagogue that has become the focus of a fierce political debate about white nationalism and anti-Semitism ahead of hotly contested U.S. congressional elections next week.

Eleven worshipers were gunned down on Saturday morning by a man who stormed into the Tree of Life Synagogue and opened fire, yelling anti-Semitic statements including: “All Jews must die.” It was believed to be the deadliest attack on Jews in the United States in recent history.

Funerals were being held on Wednesday for Melvin Wax, 88, who was leading Sabbath services when the attack began; retired real estate agent Irving Younger, 69; and retired university researcher Joyce Fienberg, 75.

Mourners began showing up hours before Fienberg’s midmorning funeral at the Beth Shalom Synagogue as police blocked off surrounding streets.

The aftermath of the tragedy still pervaded life in the Squirrel Hill neighborhood where the synagogue is located.

In coffee shops, customers talked about the victims they knew. In the street, friends embraced and comforted one another during the period of raw grief.

The synagogue attack has heightened a national debate over Republican U.S. President Donald Trump’s rhetoric, which critics say has contributed to a surge in white-nationalist and neo-Nazi activity. His administration denies he has encouraged far-right extremism and is instead attempting to unify America.

Amid the first funerals for victims on Tuesday, Trump visited Tree of Life.

Thousands protested his presence in the city, accusing him of using rhetoric that has fueled anti-Semitism in America.

Several thousand protesters, an ethnically mixed crowd of all ages, held an anti-Trump rally about a block away from the synagogue just as his visit began, singing Old Testament psalms and carrying signs with such slogans as: “We build bridges not walls.”

Trump made no public comments during his visit but wrote on Twitter on Wednesday morning that his office had been “shown great respect on a very sad and solemn day” in Pittsburgh.

“Small protest was not seen by us, staged far away,” he tweeted. “The Fake News stories were just the opposite-Disgraceful!”

More than 1,800 people paid their respects on Tuesday at Rodef Shalom, another synagogue in Squirrel Hill, the heart of the city’s Jewish community.

Trump’s visit to Pennsylvania’s second largest city came seven days before elections that will determine whether his Republican Party maintains control of both houses of Congress or whether the Democrats seize a majority in one chamber or both.

The accused gunman in the synagogue attack, Robert Bowers, was charged on Monday with 29 federal felony counts including hate crimes.

Four days after the attack, nerves in Squirrel Hill were still frayed. A public school was placed on lockdown following an unsubstantiated report that someone had brought a gun onto campus, police said. The lockdown ended after police found no weapons.

Jodi Smith, a Pittsburgh native, joined mourners ahead of the Wax funeral at the Ralph Schugar Chapel and remembered him as a “very polite, gentle man.”

“I could have claimed him as a father,” Smith said. “He was always at the synagogue, always helping out. The synagogue had been his life since his wife passed away a few years ago.”

Fienberg spent 25 years as a researcher at the University of Pittsburgh’s Learning Research and Development Center until she retired in 2008.

“She was an engaging, elegant, and warm person,” the center said on Facebook.

Younger, whose funeral is being held at Rodef Shalom, was remembered as a doting grandfather.