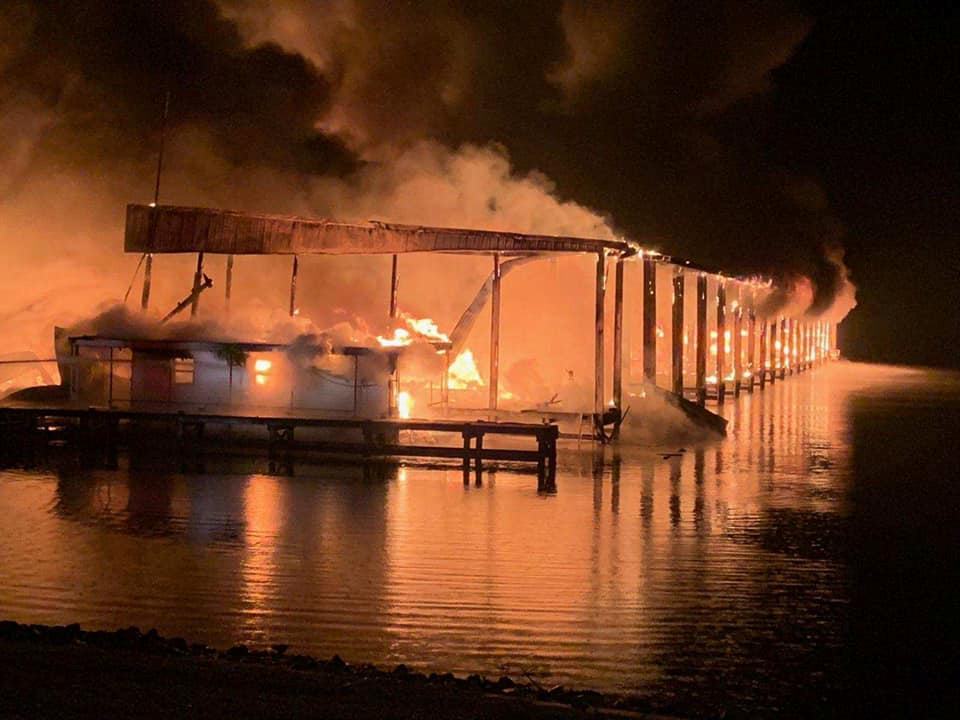 (Reuters) – Fire swept through a lakefront marina in Alabama early on Monday, killing at least eight people and sending seven others to hospital after flames engulfed 35 vessels from house boats to pontoons, the local fire chief said.

All the people known to have been staying at the dock have been accounted for, but emergency responders will continue searching for victims in case anyone was missed, Scottsboro Fire Chief Gene Necklaus told reporters.

Seven people who leapt into the water after the fire started around 12:40 a.m. were rescued and taken to hospital, where they were treated and released, Necklaus said.

Social media images showed a row of boats at the marina engulfed in flames in the predawn darkness at Lake Guntersville in northern Alabama. Several of the boats sank, Necklaus said.

Officials at first reported eight people missing, and upon further search all eight were found dead, the fire chief said.

“Our primary objective remains to check every boat, every vessel, everything we can check, to ensure that we have accounted for all the victims,” Necklaus said.

Authorities will continue search and rescue efforts in addition to environmental cleanup before concentrating on determining the cause of the fire, he said. 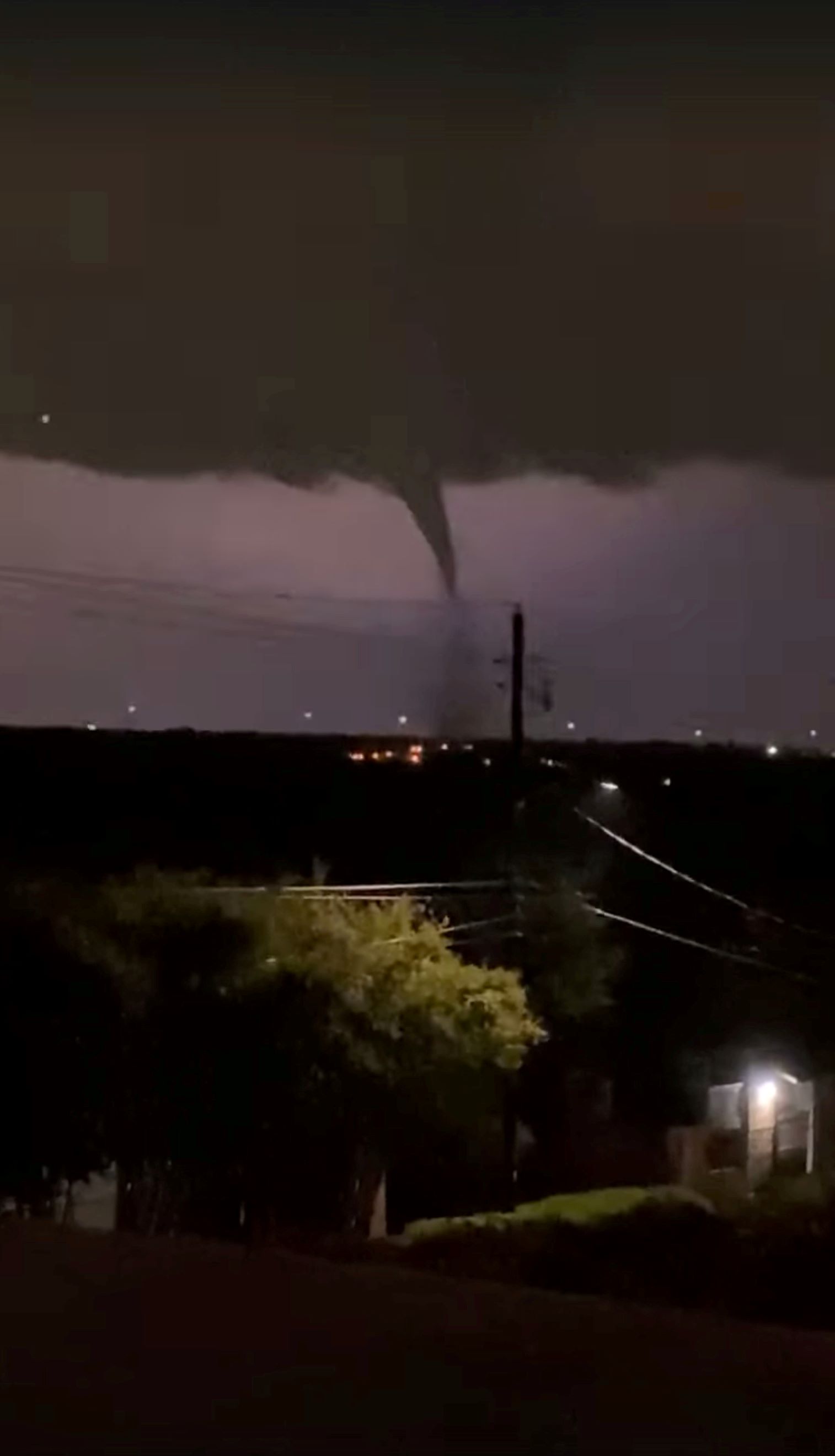 Homes destroyed, thousands without power after tornado rips through Dallas
(Reuters) – Emergency responders on Monday were assessing damage from a tornado that plowed through parts of northern Dallas late on Sunday, knocking out power to more than 175,000 homes and businesses and delaying flights at regional airports.

The city’s emergency management department said on its website that 100 traffic lights were without power and several more were knocked down on Monday morning, and crews were still surveying the damage. There were no reports of fatalities.

Some 63,000 homes and businesses in Dallas county were still without power on Monday morning, according to PowerOutage.us.

The storm left a miles-long swath of destruction through Dallas, hitting near the Love Field airport in the city’s north, the National Weather Service’s Weather Prediction Center in College Park Maryland said early on Monday.

Video footage on Twitter showed collapsed roofs, overturned cars and homes reduced to piles of debris in the wake of the twister in Richardson, Texas, a northeast suburb of Dallas. Images showed the roof and walls of a Home Depot <HD.N> store had caved in, exposing a mangled web of ceiling beams.

“It was exactly one tornado that hit at 9:02 p.m.,” said National Weather Service meteorologist David Roth.

“We also saw golf ball- and baseball-sized hail in some areas and a narrow swath of north Dallas that got between one to three inches of rain,” Roth said, or the equivalent of 2.5 cm to 7.6 cm.

(Reporting by Subrat Patnaik in Bengaluru, Rich McKay in Atlanta and Gabriella Borter in New York; Editing by Alex Richardson and Steve Orlofsky) 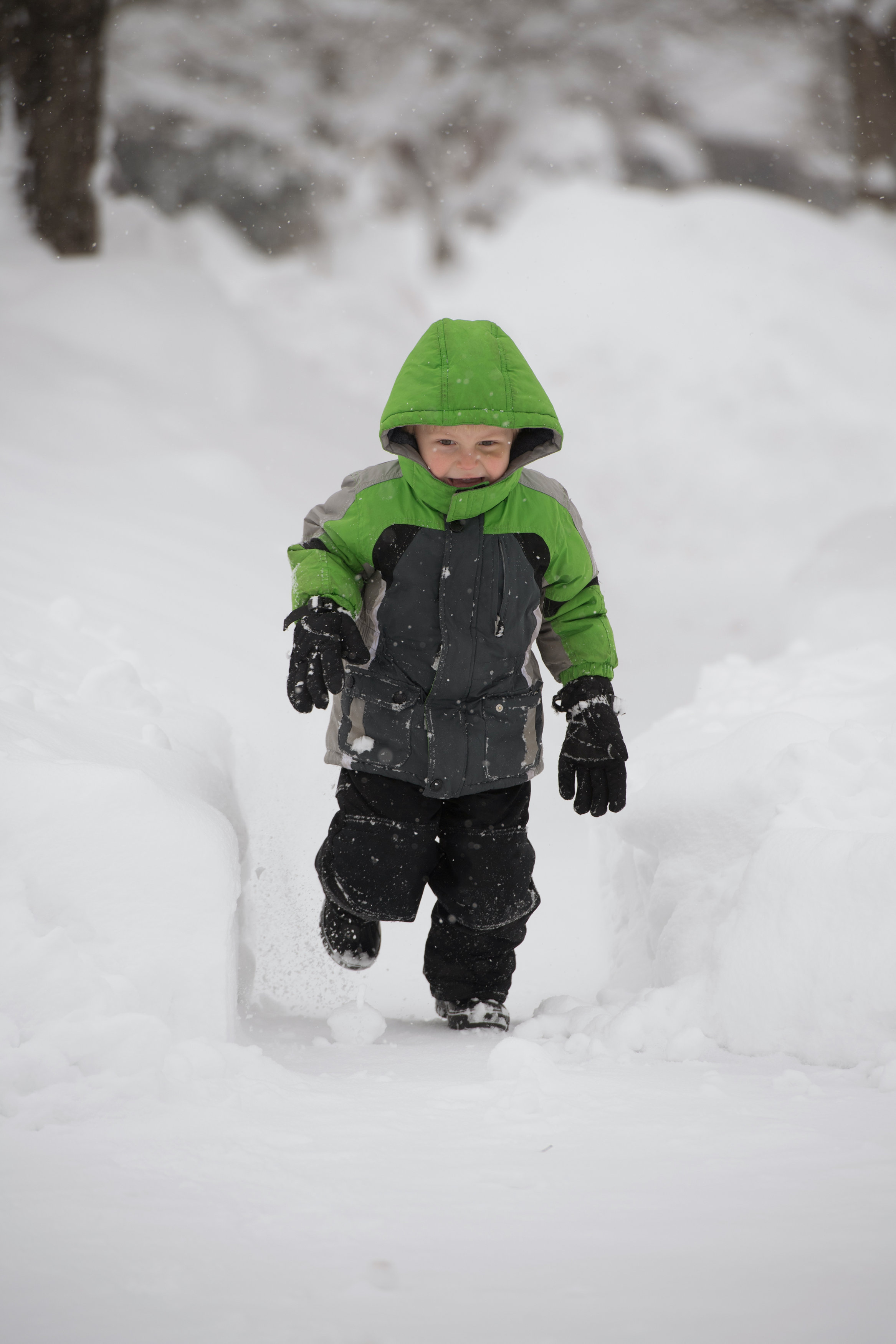 (Reuters) – A storm that has dumped more than 65 inches (165 cms) of snow this week on Erie, Pennsylvania, is expected to slightly taper off on Wednesday after leaving drifts that buried cars, paralyzed the area and made the county declare an emergency. 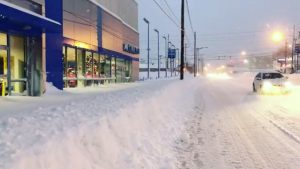 A general view of 1925 State Street after the record snowfall in Erie, Pennsylvania, U.S., December 26, 2017 in this picture obtained from social media. Courtesy of Instagram @BLJEFFERYS /via REUTERS

But the respite for Erie, a city of about 100,000 in northwest Pennsylvania on the shores of Lake Erie, is expected to be short-lived, with a fresh round of winter storms coming Thursday night predicted to bring as much as 10 inches more snow, forecasters said.

“This is a crippling snow event,” said Zach Sefcovic, a meteorologist with the National Weather Service in Cleveland.

“They are no strangers to snow in that part of the state, but this much snow in that short a time is just unprecedented,” he said in a telephone interview.

Large parts of the United States were gripped by freezing weather, with an area stretching from Montana to Maine expected to see temperatures below 10 degrees Fahrenheit (-12.2 degrees Celsius) early on Thursday, the National Weather Service said. 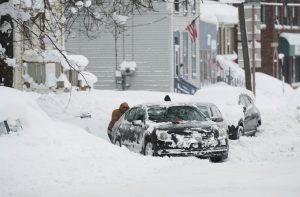 People help dig out a car from a parking spot after two days of record-breaking snowfall in Erie, Pennsylvania, U.S., December 27, 2017. REUTERS/Robert Frank

The winter blast in Erie was caused by cold Arctic air moving over the lake, which had relatively mild water temperatures, forecasters said.

The storm broke a 59-year-old record for a two-day snowfall in Pennsylvania, topping the 44 inches that fell in 1958. Erie County Executive Kathy Dahlkemper issued a temporary disaster emergency declaration that mobilized resources to help the area.

Pictures of residents on social media showed drifts reaching beyond window-levels in houses and people clearing paths through chest-high accumulations.

“Out of Doritos. Family is arguing. Dogs are getting ornery. It’s been 3 days since my last chicken wing. We are out of whiskey,” wrote Nicole Massari on her Instagram account @theworldaroundnikki, along with a video showing her Pennsylvania home surrounded by snow.

Pennsylvania Governor Tom Wolf deployed 21 Pennsylvania National Guard troops along with some all-terrain military vehicles to the region on Tuesday to help residents dig out and transport emergency responders around the area.

Erie resident Brian Sheridan on Wednesday posted a photo on social media showing the top of his mail box peeking out underneath a mound of snow. In a caption, he wrote: “At this point, it just might be easier to put a hold on our mail until spring.” 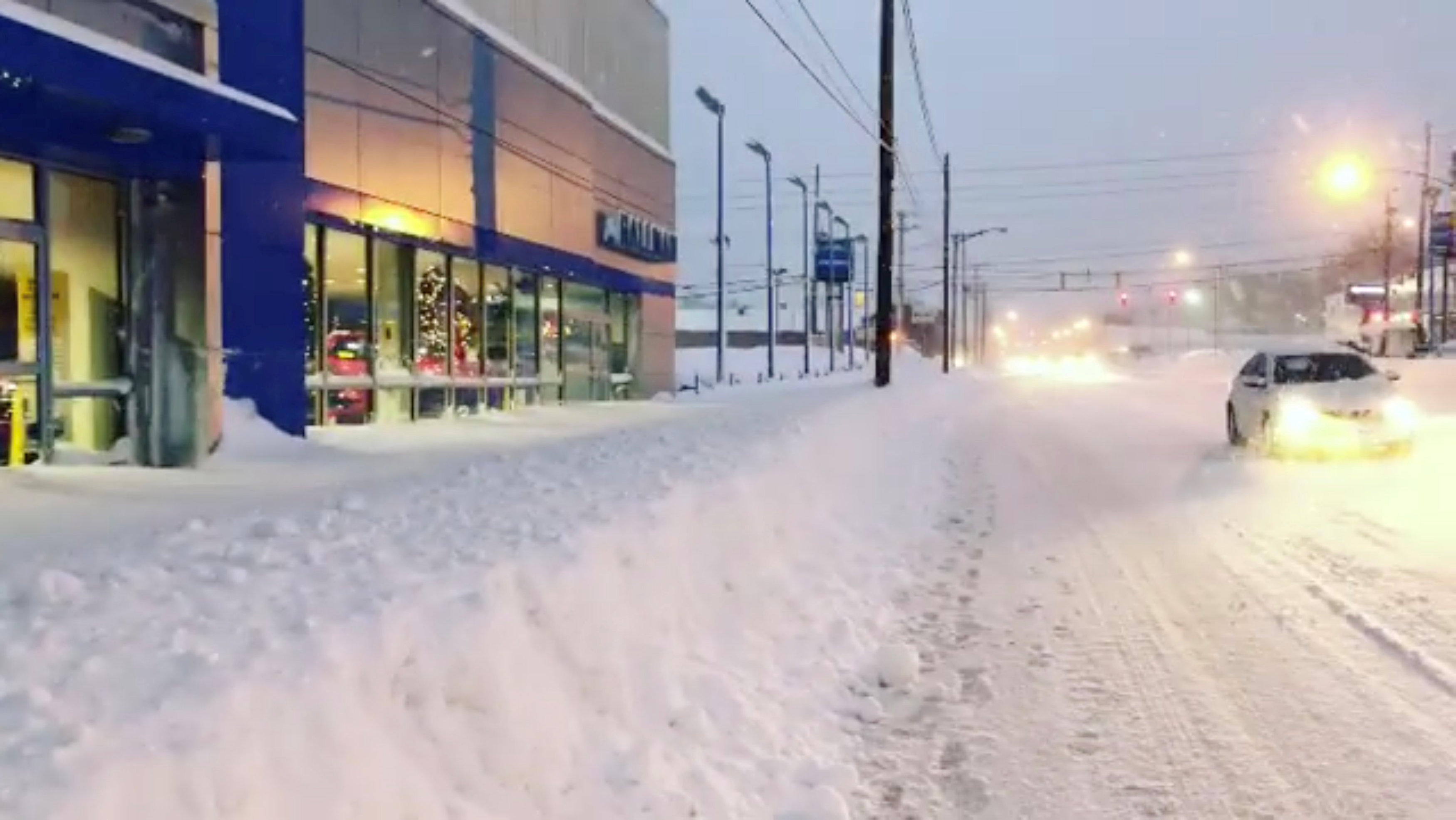 (Reuters) – Snow piled up in Erie, Pennsylvania, on Wednesday after two days of record-breaking snowfall that had already surpassed 5 feet (1.5 meters), breaking city and state records, according to the National Weather Service.

Though residents are used to winter snow squalls blowing in from adjacent Lake Erie, which straddles the border with Canada, the Christmas storm is already one for the ages.

“This is an incredible amount of snow that we’re trying to move,” the Erie Police Department said in statement after the city declared a “snow emergency” on Tuesday, imploring people to stay off the streets.

By Tuesday evening, meteorologists had counted at least seven different city and state records broken by the storm.

The 34 inches (0.86 meters) that fell on Christmas Day alone was a new record for any single day in Erie, handily beating the 20-inch record set back in 1956, the National Weather Service said.

And the storm broke a 59-year-old record for two-day snowfall recorded anywhere in Pennsylvania, totaling 58 inches when Tuesday’s barrage was added and beating the 44-inch record set in Morgantown in 1958.

Another two to four inches of snow were forecast for Wednesday, with up to 6 inches in some places.

No residents of Erie, a city of 99,000 people according to recent U.S. census estimates, have been publicly reported as being injured in the storm, though some have complained to local news outlets about how long it takes to shovel out their driveways this week.

Pennsylvania Governor Tom Wolf deployed 21 Pennsylvania National Guard troops along with some all-terrain military vehicles to the region on Tuesday to help residents dig out, check on people’s well-being and transport emergency responders around the area.