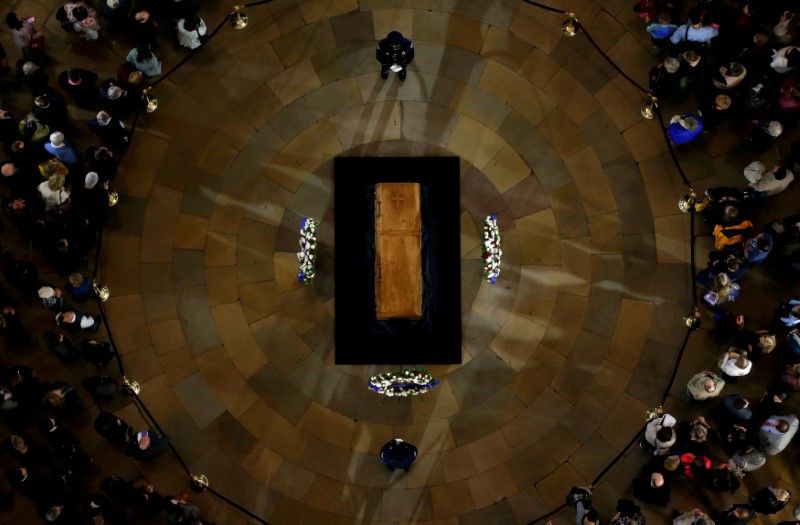 (Reuters) – U.S. evangelist Billy Graham, who preached to millions around the world in a 70-year career, will be laid to rest on Friday in his native North Carolina following a funeral service that will draw thousands of mourners including President Donald Trump.

The service for Graham, who died on Feb. 21 at age 99, comes after he lay in honor at the U.S. Capitol in recognition of a clergyman who counseled presidents and was the first noted evangelist to take his message to the Soviet bloc.

Graham will later be buried in a pine coffin made by Louisiana prison inmates next to his late wife, Ruth, at the Billy Graham Library in Charlotte, North Carolina, organizers said.

The 90-minute funeral service is scheduled to start at 12 p.m. EST. It will be held at a library parking lot under a tent emblematic of Graham’s 1949 Los Angeles revival under canvas that marked his breakthrough as an evangelist.

“It was Mr. Graham’s explicit intent that his funeral service reflect and reinforce the Gospel message that he preached” for decades – the need for a personal relationship with God through Jesus Christ, Mark DeMoss, a spokesman for the Billy Graham Evangelistic Association, said in a statement.

Trump, a Republican, will be among about 2,300 invited guests, along with first lady Melania Trump and Vice President Mike Pence and his wife, Karen, organizers said.

Graham’s son, the Rev. Franklin Graham, will deliver the eulogy at the funeral service, which will include singing by Grammy winner Michael Smith.

One of the guests, Jim Daly, the head of the Focus on the Family evangelical organization, said the funeral would be “a tribute to a wonderful life. This man lived it well.”

Asked about the prospects of another evangelist like Graham arising, Daly said by phone, “No diamond is alike. In that regard, Billy Graham was a unique gemstone that God created.”

Graham’s headstone will carry his name, dates of birth and death and the inscription “Preacher of the Gospel of the Lord Jesus Christ” above the Bible reference “John 14:6.”

According to his ministry, Graham preached Christianity to more people than anyone else in history. Some 77 million saw him in person, and nearly 215 million more watched his crusades on television or through satellite link-ups, it has said.

(Reporting by Ian Simpson in Washington; Editing by Cynthia Osterman)