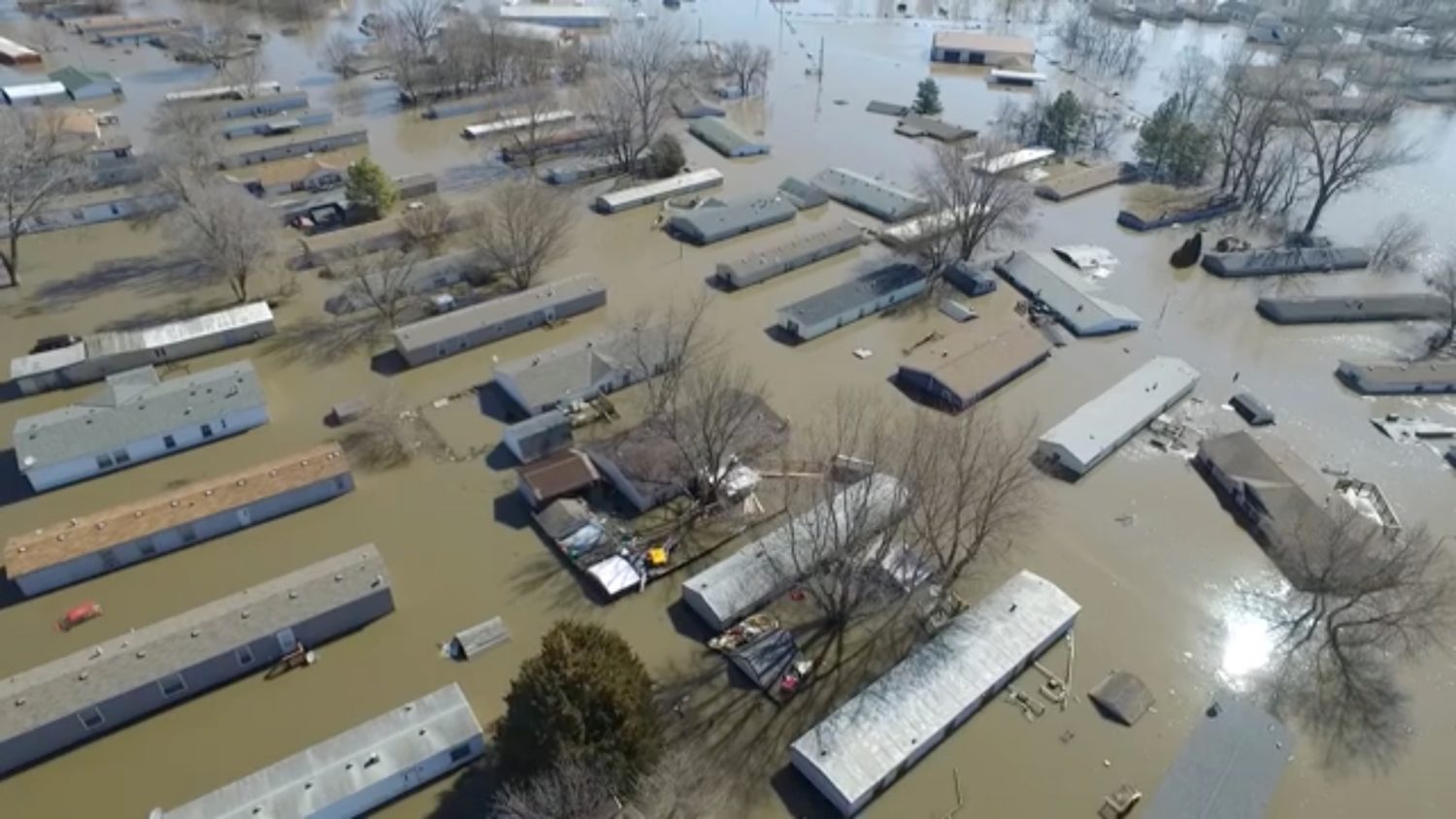 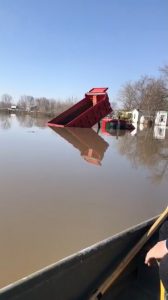 A truck is submereged in floodwater in Bellevue, Nebraska, U.S., March 21, 2019, in this still imgage taken from social media. Bellevue (Nebraska) Police Department via REUTERS

The declaration allows state resources and assistance to be provided directly to counties and municipalities in need, said Mike O’Connell, spokesman for the Missouri Public Safety Department.

Authorities say continued flooding in the days ahead is unlikely to reach the widespread, catastrophic scale seen in Nebraska and Iowa – as excess flow dissipates along the length of the river and water breaches or flows over the tops of levees.

But the threat of extensive flooding lingers over the wider region through May and could grow dire in coming weeks with additional rainfall and melting snow runoff, National Oceanic and Atmospheric Administration officials said on Thursday.

“This is shaping up to be a potentially unprecedented flood season, with more than 200 million people at risk,” Ed Clark, director of NOAA’s National Water Center in Tuscaloosa, Alabama, said on Thursday in the agency’s spring outlook.

Scientists said on Thursday that climate change played a hand in the deadly floods, while a Trump administration official said more study was needed before making that link.

Floodwaters have already swamped large stretches of Missouri, Nebraska and Iowa, drowning livestock and damaging crop land along the Missouri. A state of emergency has been declared in all or parts of the three Midwestern farm states.

The river’s next major flood crest is forecast to hit St. Joseph, Missouri, early Friday morning and a day later in Kansas City, Missouri, 55 miles (90 km) to the south.

With no more rain forecast until next weekend, authorities hope flood levels will abate. Still, the inundation has strained the system of dams and levees built and operated by the U.S. Army Corps of Engineers in the region.

More than 40 levee breaches have been confirmed in the agency’s Omaha district, encompassing the hardest-hit parts of Nebraska, Iowa and Missouri, officials told a news briefing. 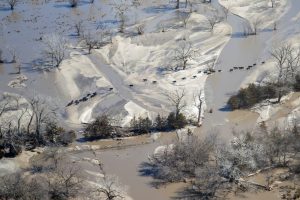 Nine more instances of levee breaches and spillovers have occurred farther downstream in Missouri and Kansas, including one near St. Joseph that was last topped in 1993, said Jud Kneuvean, the Corps’ emergency management chief in Kansas City.

The disaster’s epicenter had shifted by Thursday to northwestern Missouri, where roughly 40,000 acres of farmland in Holt County alone was under water and a population of about 500 was at risk, Kneuvean said.

The Holt County farming town of Craig, home to about 250 people, was evacuated. So too were some 200 residents of Lewis and Clark Village in neighboring Buchanan County after a nearby levee failed, officials said.

In Forest City, downstream from Craig in Holt County, residents young and old hurried to fill sandbags to bolster their local levee, hoping to stave off disaster.

More than 2,400 homes and businesses in Nebraska have been destroyed or damaged, with 200 miles (320 km) of roads unusable and 11 bridges wiped out, according to authorities.

Nebraska Governor Pete Ricketts estimated the floods caused at least $439 million in damage to public infrastructure and other assets, and $85 million to private property. He put agricultural flood damage for the state at nearly $1 billion.

Mark Hamilton, 59, a retired military officer, has lived in a mobile home in Arlington, Nebraska, for the last 23 years but was forced to flee when it flooded. He said he lost his house, motorcycle and truck at a total cost of about $150,000.

“We’ve had floods nine, 10 years ago, but it was nothing like this,” Hamilton said. “That entire trailer park needs to be removed now; nobody can live there.”