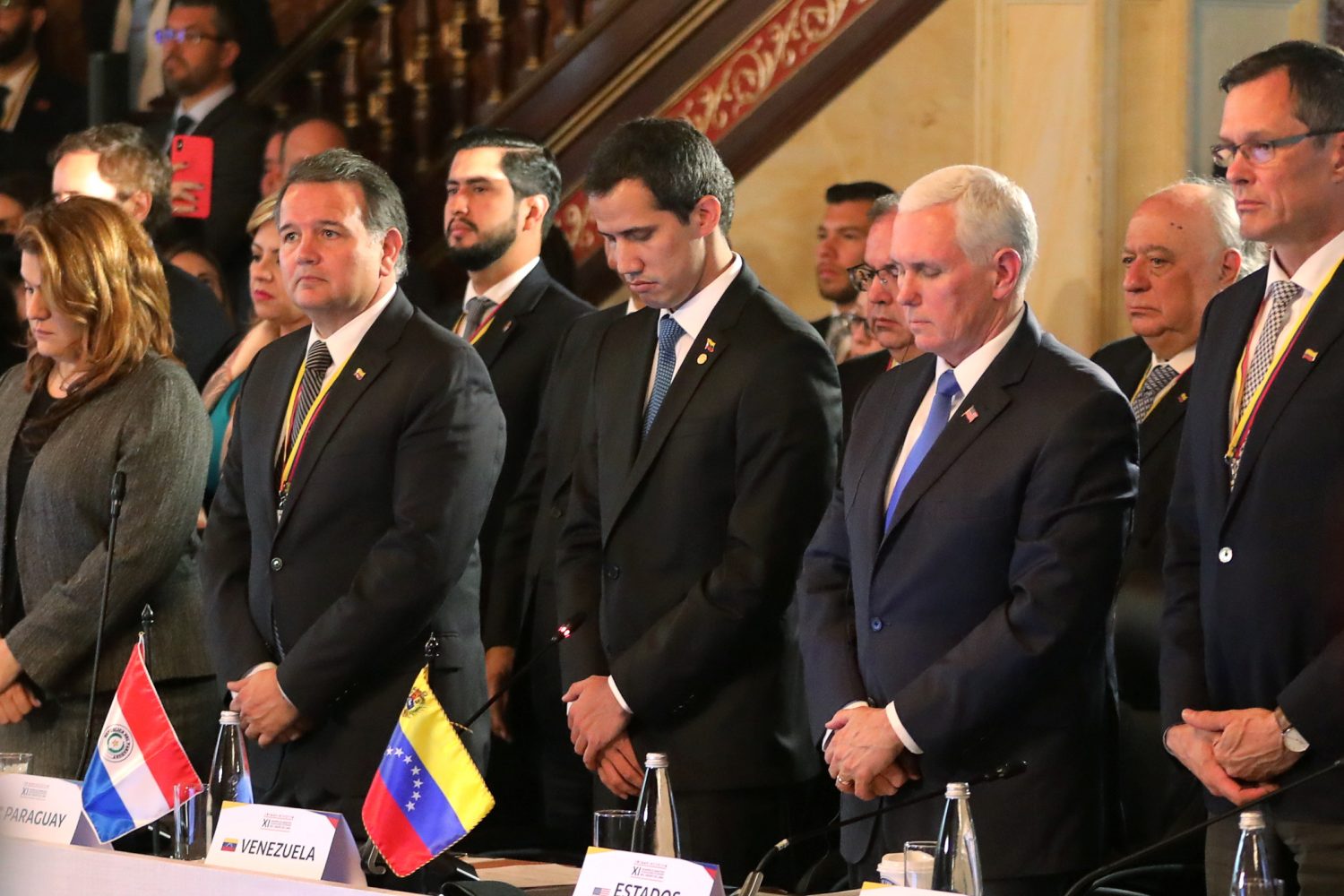 BOGOTA (Reuters) – The United States targeted Venezuela’s government with new sanctions on Monday and called on allies to freeze the assets of its state-owned oil company PDVSA after deadly violence blocked aid from reaching the crisis-hit country during the weekend.

The United States also took its pressure campaign to the United Nations Security Council, asking that body to discuss the situation in Venezuela, diplomats said.

The U.S. Treasury Department’s sanctions were imposed on four Venezuelan state governors allied with the government of embattled President Nicolas Maduro, blocking any assets they control in the United States.

The new sanctions were announced in Bogota as U.S. Vice President Mike Pence and opposition leader Juan Guaido met with members of the Lima Group, a bloc of nations from Argentina to Canada dedicated to peaceful resolution of the Venezuelan crisis.

Pence said the United States would stand by Guaido until freedom was restored to the oil-rich nation. He called for all Lima Group nations to immediately freeze PDVSA’s assets and to transfer ownership of “Venezuelan”assets “in their countries” from “Maduro’s henchmen” to Guaido’s government-in-waiting.

“In the days ahead … the United States will announce even stronger sanctions on the regime’s corrupt financial networks,” Pence said. “We will work with all of you to find every last dollar that they stole and work to return it to Venezuela.”

Guaido, sitting next to Pence at the meeting, asked for a moment of silence for those killed in what he called the “massacre” of the weekend.

At least three people were killed and almost 300 wounded during the protests and clashes on Saturday as U.S.-backed aid convoys attempted to enter Venezuela to deliver food and medicine.

Guaido, recognized by most Western nations as Venezuela’s legitimate leader, has urged the bloc to consider “all options” in ousting Maduro.

Unlike the Lima Group, of which the United States is not a member, the Trump administration has so far declined to rule out the use of military force. But Peruvian Deputy Foreign Minister Hugo de Zela Martinez denied there was any division in the group over the use of force.

Pence also called for Mexico and Uruguay, two-left leaning regional governments, to join most of the region’s other powers in embracing Guaido as Venezuela’s rightful president.

Washington wants the 15-member U.N. Security Council to formally call for free, fair and credible presidential elections with international observers. Russia, which along with China has major investments in Venezuela’s energy sector and back Maduro, proposed a rival draft resolution.

Violence escalated during the weekend when the convoy of trucks with food and medicines was blocked by soldiers and armed groups loyal to Maduro. He says the aid efforts are part of a U.S.-orchestrated coup against the OPEC member.

In the Venezuelan town of San Antonio, near the border with Colombia, residents on Monday chafed at the continued border closure ordered by Maduro’s government last week.

Residents increasingly cross into the neighboring country to work and buy basic goods that are unavailable in Venezuela, which has been wracked by years of hyperinflation and shortages of food and medicine. Illegal crossings over back roads known as “trochas” generally require paying tolls to low-level criminals who control them, known as “trocheros.”

“We were hungry when before the border closed. Now it will be even worse,” said Belkis Garcia, 34, walking with her husband along a trail that leads to Colombia. “We have to pay (to cross), so the little money we have for half the food is not enough. We don’t know what will happen if the border continues closed.”

Four people have been killed, 58 have suffered bullet wounds and at least 32 arrested in unrest since Friday, local rights group Penal Forum said in a press conference.

The four governors sanctioned by the U.S. Treasury include the flamboyant Rafael Lacava of state of Carabobo, who in 2018 visited Washington as part of talks that led to the release of Joshua Holt, an American who was imprisoned in Venezuela for nearly two years. Lacava goes by the nickname “Dracula” in reference to his habit of doing late-night patrols and is known for off-the-cuff social media videos.