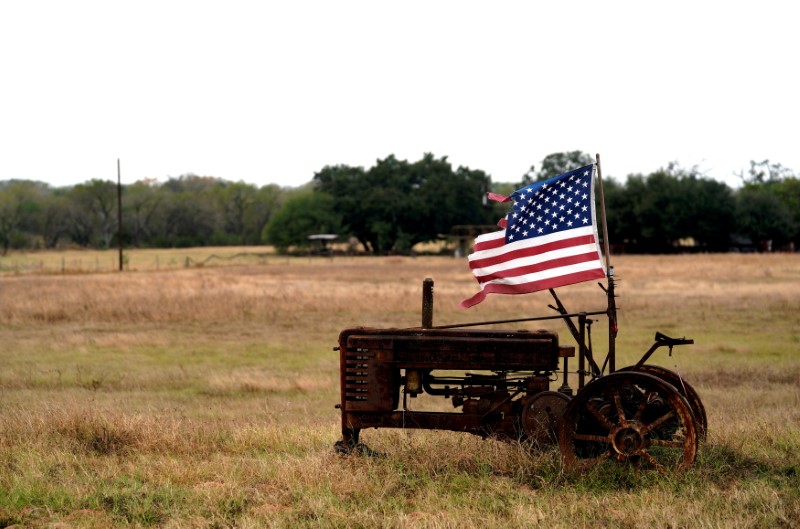 (Reuters) – Corn and soybean farmer Lorenda Overman from North Carolina has been selling her crops at a loss and delaying paychecks to her workers since the U.S. trade war with China tanked agriculture prices, and her farm’s debt recently topped $2 million.

If the Trump administration fails to clinch a deal with Beijing soon to end the trade dispute, she says, her operation may have a hard time staying afloat.

“We need some stability, we need some action and we need it now,” Overman, who farms in Goldsboro, said via telephone.

Her desperation reflects the mounting urgency across U.S. farm country over ongoing talks aimed at ending Washington’s trade dispute with China and pulling the U.S. agriculture industry out of its worst crisis since the 1980s.”

U.S. trade negotiators currently locked in talks with their Chinese counterparts are demanding Beijing change the way it does business with the United States, providing more access for U.S. companies, enforcement of intellectual property protection and an end to industrial subsidies.

While the talks mark the closest point yet to an end to the nine-month trade war, the two sides are yet to agree on the core issues which are essential for a deal that would reopen a critical market for U.S. farm goods like soybeans, sorghum and corn-based ethanol.

So far, the American rural heartland that helped carry President Donald Trump to victory in 2016 remains largely supportive of his hard line on trade, saying unfair Chinese practices had to be addressed for longer-term economic gain.

But it has also taken the brunt of the dispute, losing a massive export market. With credit conditions eroding in the agrarian economy and total debt hitting levels unseen for decades, the pain has deepened and patience is wearing thin.

“I voted for Trump and I have no regrets. I still feel like he has a handle on what needs to be done but I am frustrated that we are still sitting here with no deal,” Overman said.

Beijing imposed tariffs last year on imports of U.S. agricultural goods, including soybeans, grain sorghum and pork as retribution for U.S. levies. Soybean exports to China have plummeted over 90 percent due to the trade dispute and sales of U.S. soybeans elsewhere failed to make up for the loss.

Meanwhile, Chapter 12 bankruptcy filings have hit the highest level in a decade in parts of the U.S. Midwest and Great Plains states, according to federal data, though stable farmland prices and low-interest rates have helped.

The administration sought to protect farmers from some of the impacts of the trade war with an aid package of up to $12 billion last year. But it has said it will not provide additional support in 2019 even if the dispute continues.

That heaps pressure on farmers, who must decide what to plant this spring without guarantees they will have a market for it, and without any safety net if they make the wrong choice. U.S. farmers planted 89.1 million acres of soybeans in 2018, the second most ever, but without a market, much of it ended up plowed under, rotting in piles, or in storage.

“If we get a trade deal done and soybeans are worth 20 percent more over the next six months, but we decided to plant all corn because we didn’t know – that’s something that worries a lot of people,” said farmer Derek Sawyer, 38, from Kansas.

He said his debt has risen into the millions of dollars.

“Bankers so far have been OK to work with us as far as restructuring some debt,” he said. “But that rope keeps getting shorter.”

Delays to a trade deal have also kindled worries over the permanent loss of market share, as other suppliers such as Argentina and Brazil replace the tariff-blocked U.S. supply.

“It’s going to be a long time before we gain some of those markets back,” said Bill Tentinger, a 69-year-old third-generation corn, soybean and hog farmer from Le Mars, Iowa.

“If we could have settled this with China in a month or two, we would have seen more excitement in the market,” he said.

Chris Pollack, a dairy farmer from Wisconsin which saw hundreds of milk producers go out of business last year, says it is getting harder for the industry to embrace the administration’s focus on long-term gains targeted from the China trade standoff.

His farm has suffered from Chinese tariffs on U.S. cheese and other dairy products, and has been further hurt by Trump’s trade disputes with Canada and Mexico.

(Reporting by Humeyra Pamuk in Washington; editing by Richard Valdmanis and Lisa Shumaker)