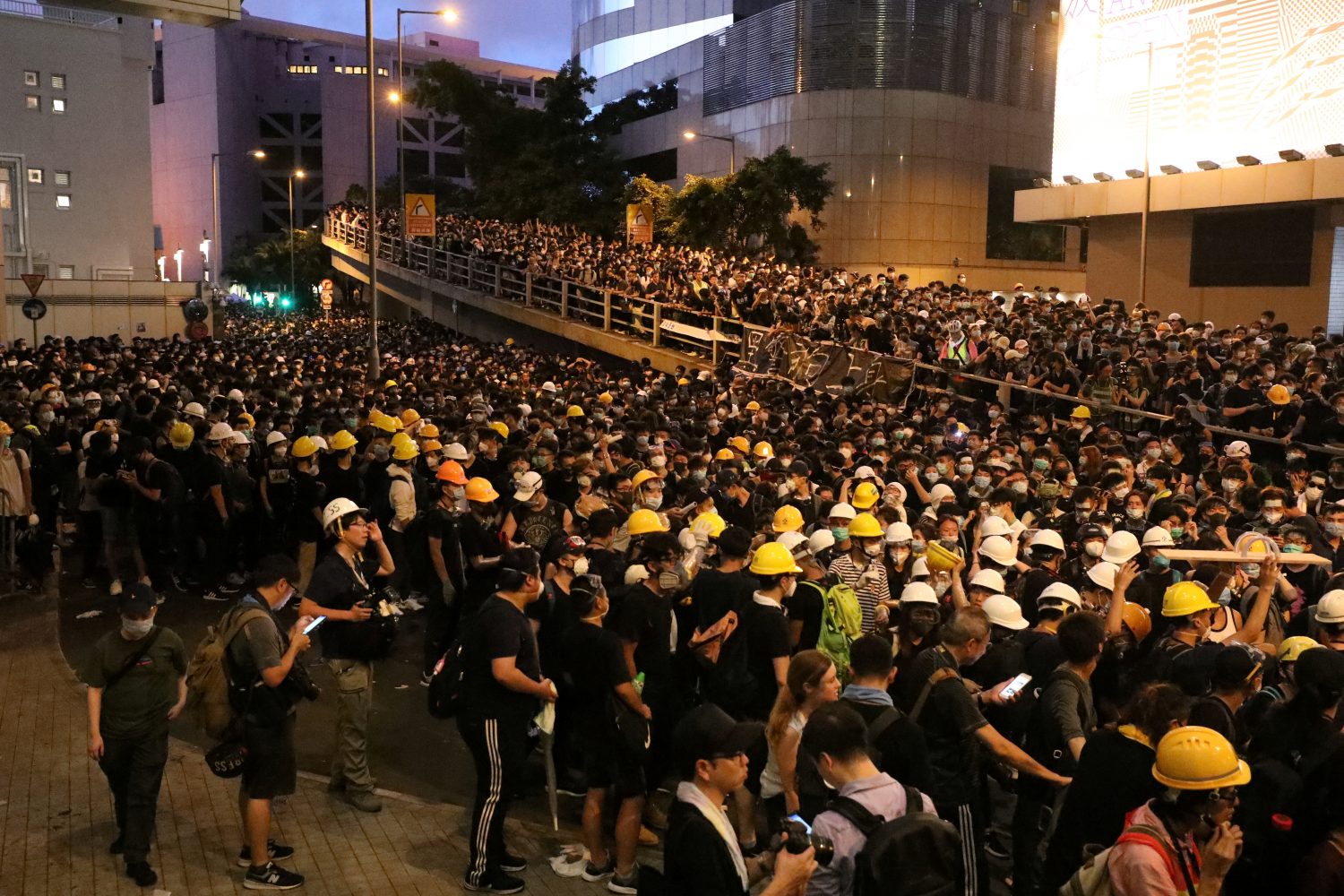 By Jessie Pang and Clare Jim

HONG KONG (Reuters) – Thousands of demonstrators blockaded police headquarters on Friday as Asia’s leading financial center braced itself for a third weekend of mass protests against an extradition bill that has plunged the Chinese-ruled city into crisis.

Groups of mostly students wearing hard hats, goggles and face masks set up roadblocks and trapped vehicles in a generally peaceful protest to demand that leader Carrie Lam, who promoted and then postponed the bill, scrap it altogether.

“Having people here is giving pressure to the government that we don’t agree with your extradition plans,” said student Edison Ng, who was protesting in sweltering heat of about 32 degrees Celsius (90F).

“It is not clear how long we will stay… To go or not to go, (the) people will decide,” he added.

The protests, which pose the greatest popular challenge to Chinese President Xi Jinping since he took power in 2012, once again forced the temporary closure of Hong Kong government offices over security concerns.

Roads that would normally be jammed with traffic near the heart of the former British colony were empty, with demonstrators reinforcing roadblocks with metal barriers.

“Never surrender,” echoed through the streets as the protesters chanted near police headquarters and called on police chief Stephen Lo to step down.

Riot police armed with helmets and shields appeared from the balcony of police headquarters but withdrew back inside after heavy chanting from the crowd. Police warned activists through loud hailers not to charge.

Thousands remained outside government buildings on Friday night, with the majority sitting peacefully and spraying each other with water to keep cool. Nearby, a large group sang “Sing Hallelujah to the Lord”, which has emerged as the unlikely anthem of the protests.

Hong Kong returned to Chinese rule in 1997, since when it has been governed under a “one country, two systems” formula that allows freedoms not enjoyed in mainland China, including a much-cherished independent judiciary.

Millions of people, fearing further erosion of those freedoms, have clogged the streets of the Asian financial center this month to rally against the bill, which would allow people to be extradited to the mainland to face trial in courts controlled by the Communist Party.

It triggered the most violent protests in decades when police fired rubber bullets and tear gas to disperse the crowds. Beijing’s squeeze sparked pro-democracy protests in 2014 that paralyzed parts of the city for 79 days.

Many accuse China of obstructing democratic reforms, interfering with elections and of being behind the disappearance of five Hong Kong-based booksellers, starting in 2015, who specialized in works critical of Chinese leaders.

Friday’s marchers demanded that the government drop all charges against those arrested in last week’s clashes, charge police with what they describe as violent action and stop referring to the protests as a riot.

A small group of demonstrators hurled eggs at police outside the headquarters to protest against police violence. Amnesty International in a statement on Friday that evidence of unlawful use of force by police during the June 12 protest was “irrefutable”.

The government in a statement late on Friday said the protests had caused much disruption and appealed to protesters to act peacefully and rationally. With regard to the bill, it said the government had put a stop to legislation on the matter.

Opponents of the extradition bill fear the law could put them at the mercy of the mainland Chinese justice system which is plagued by torture, forced confessions and arbitrary detentions.

The turmoil has also raised questions over Lam’s ability to govern, two years after she was selected and pledged to “unite and move forward”.

“Regarding the controversies and disputes in society arising from the strife in the past few months, being a team member of the government, I offer my sincere apology to all people of Hong Kong,” Cheng wrote in her blog.

“We promise to adopt a most sincere and humble attitude to accept criticisms and make improvements in serving the public.”

While Lam admitted shortcomings over the bill and said she had heard the people “loud and clear”, she has rejected repeated calls to step down.

Concerns over the bill spread quickly, from democratic and human rights groups to the wider Hong Kong community, including pro-establishment business figures, some usually loath to contradict the government. Some Hong Kong tycoons have started moving personal wealth offshore.

Hong Kong’s Bar Association said in a statement that it was asking the government to withdraw the extradition bill and make a commitment that any legislation would not proceed without having a full and open consultation.

Protesters had gathered early on Friday outside government offices before marching toward police headquarters. One activist read a letter of support from a Taiwan student.

“Brave HKers, perhaps when faced with adversity, we are all fragile and small, but please do not give up defending everything that you love,” the protester read through a loud hailer to applause.

Beijing has never renounced the use of force to take over self-ruled Taiwan, which it regards as a recalcitrant, breakaway province. Many have waved Taiwan flags at recent demonstrations in Hong Kong, images certain to rile authorities in Beijing.

Taiwan, overwhelmingly opposed to a “one country, two systems” formula for itself, has voiced support for Hong Kong.