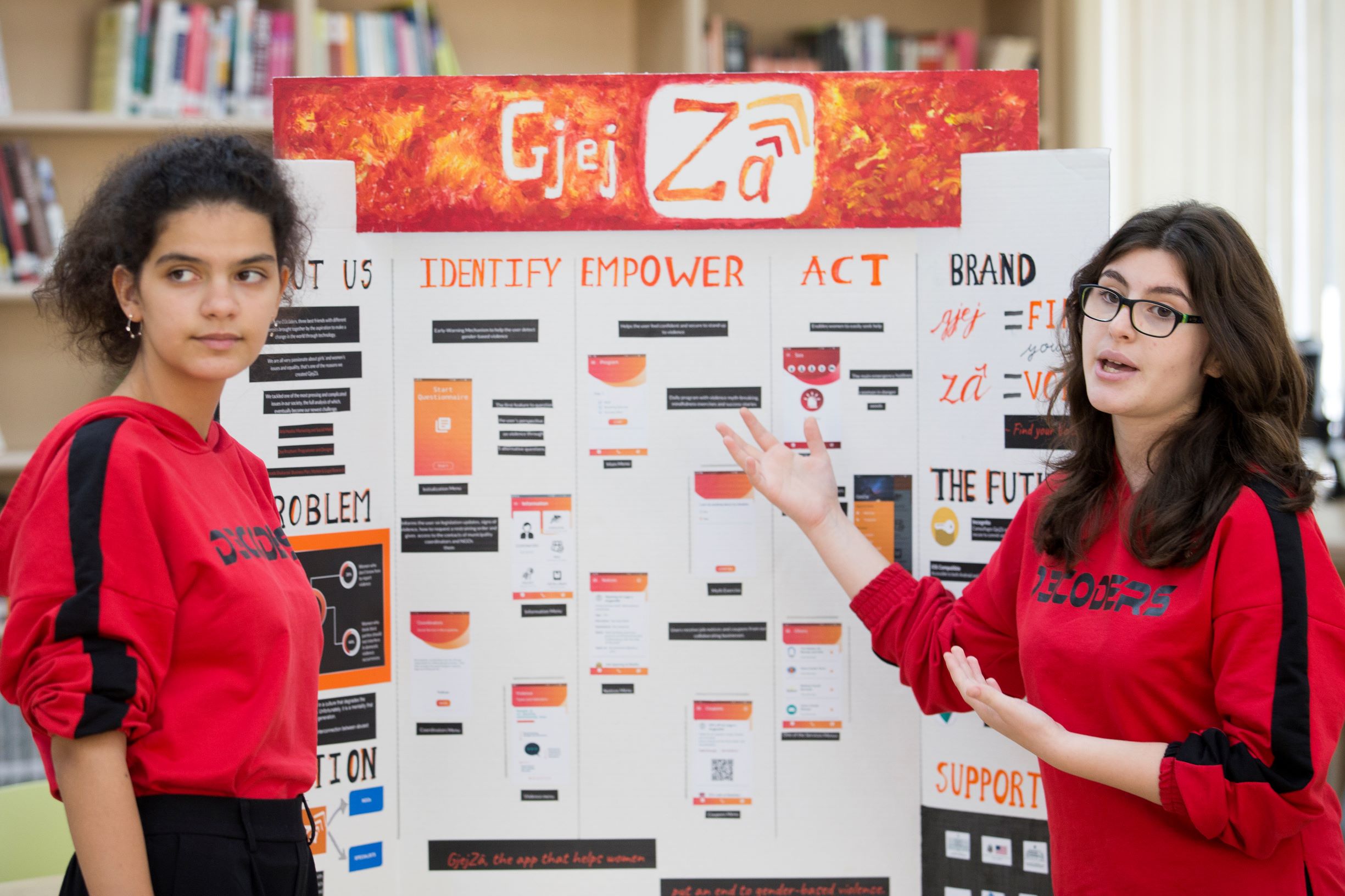 TIRANA (Reuters) – Three Albanian 16-year-old girls have developed an app to help victims of domestic violence access support, hoping to tackle a huge problem in Albania, where one in two women suffered abuse last year, according to a survey.

They will launch their app, known as GjejZâ, (Find your Voice), on Friday, after winning an international technology competition for girls in the United States.

“Violence against women is a huge issue in Albania and it also affects us as teenage girls because we see the early stages of this even in our peers, in our friends,” said Jonada Shukarasi, one of the developers.

One in two women suffers violence in Albania, said Iris Luarasi, the head of a national hotline for abused women, citing a 2018 survey, and 4,000 cases were reported in 2018.

A new report by the Organisation for Security and Co-operation in Europe (OSCE) found almost 9 in 10 women consider violence against women to be common in Albania, and that 97% of victims of intimate in-house violence never report it to the police.

Known as the D3c0ders, the girls – Arla Hoxha, Dea Rrozhani and Jonada Shukarasi – learned how to code and create applications four years ago through an outreach program run by the U.S. Embassy in Tirana.

News of their award in the Technovation Challenge competition has stoked national pride in Albania, an ex-communist country that is now a NATO member endeavouring to join the European Union.

The girls have received widespread coverage and congratulations from senior government officials.

This year’s competition required participants to build an app that tackled social problems, so the girls decided to focus on gender-based violence. They worked with psychologists, a deputy interior minister and women’s issues experts.

“Find your Voice” has become not only our motto, but the message we want to convey to all Albanian women,” said Rrozhani.

“GjejZâ helps women fight gender-based violence in three easy steps by identifying the problem, empowering the user and enabling them to take action,” she said.

Users answer a series of questions which helps them identify if they are victims of domestic violence, and the app offers them testimonies from women who have escaped abuse and encouragement to report it.

The scope of the app is huge – it provides breathing exercises to help women, connects them to state officials in every town who can help them secure restraining orders and access benefits. It also advises on employment opportunities and shelters.

Women can download the app, and get in touch with the police and support groups by phone or instant messaging. Mobile phone ownership is high in Albania – a population of 2.8 million uses 4.63 million mobile phones.

Tara Chklovski, founder and chief executive of Technovation, said the judges felt the girls had “addressed the difficult topic of abuse bravely and thoughtfully from the research to product development”.

“I will be happy to see the application up and running,” she said.