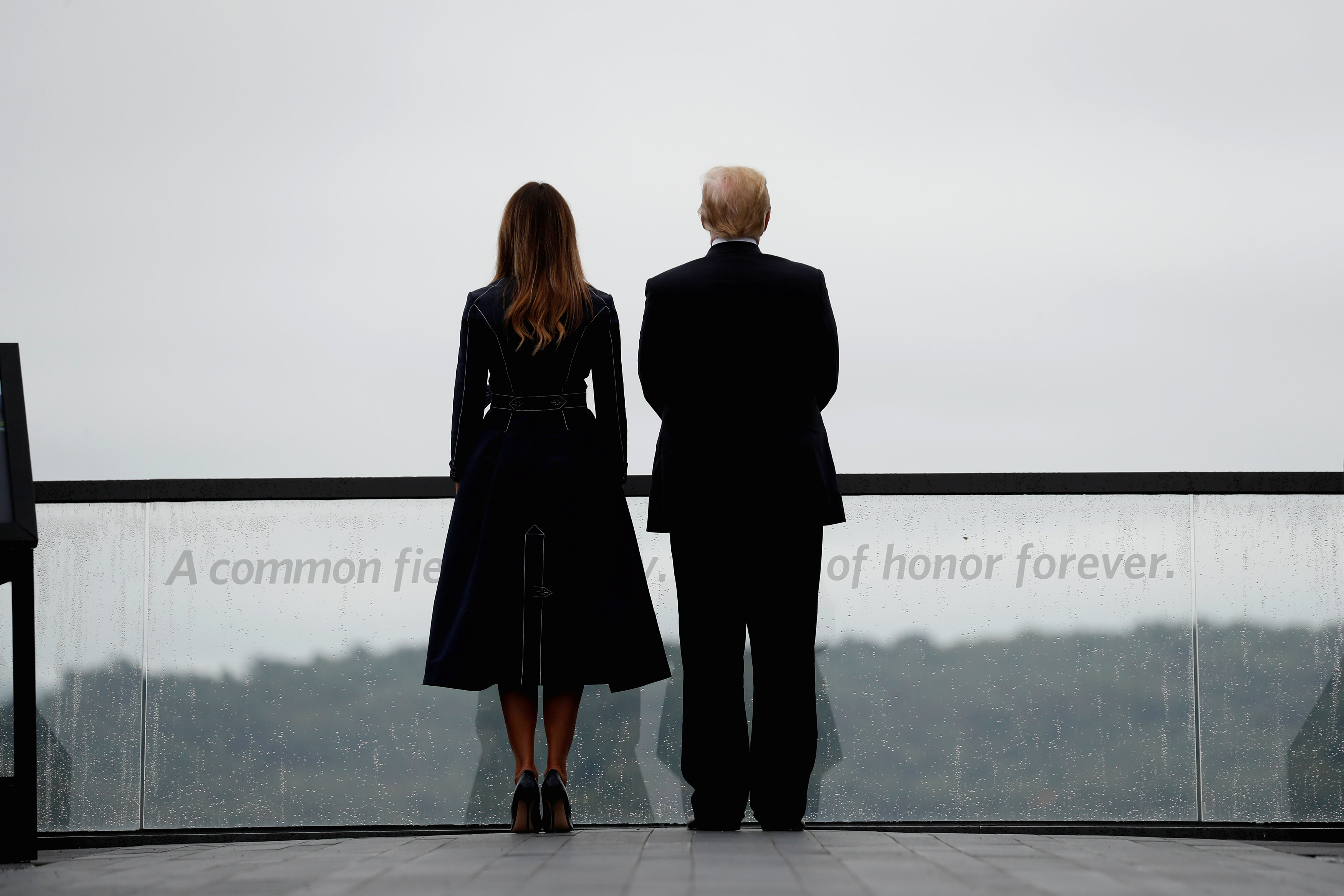 SHANKSVILLE, Pa. (Reuters) – President Donald Trump on Tuesday lauded the men and women of United Flight 93 for saving countless lives when they struggled with hijackers on Sept. 11, 2001 and called the field where the plane went down a monument to “American defiance.” 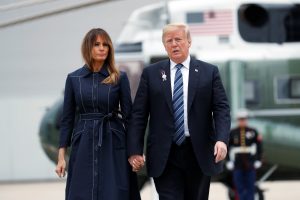 U.S. President Donald Trump and first lady Melania Trump hold hands and talk as they walk from the Marine One helicopter to Air Force One at John Murtha Johnstown-Cambria County Airport prior to departing Johnstown, Pennsylvania, U.S., September 11, 2018. REUTERS/Kevin Lamarque

Commemorating the 17th anniversary of the attacks that struck the World Trade Center in New York and the Pentagon in Washington, Trump said the nation shared the grief of the family members whose loved ones were lost that day.

“We grieve together for every mother and father, sister and brother, son and daughter, who was stolen from us at the Twin Towers, the Pentagon and here in this Pennsylvania field,” Trump said.

“We honor their sacrifice by pledging to never flinch in the face of evil and to do whatever it takes to keep America safe.”

Flight 93 was heading to San Francisco from Newark, New Jersey, when passengers stormed the plane’s cockpit and sought to take control from the hijackers, crashing in a field and preventing what was thought to be another planned target in Washington.

Family members of Flight 93, some of their voices breaking, read aloud the names of the 40 passengers and crew members who died. Memorial bells tolled.

Trump and his wife, Melania, traveled to the Flight 93 National Memorial from Washington and paused for a moment of reflection while overlooking the field where the plane crashed. 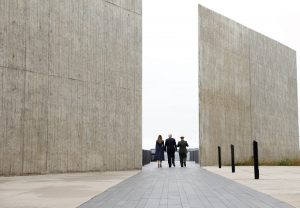 “They boarded the plane as strangers and they entered eternity linked forever as true heroes,” Trump said of the passengers and crew.

“This field is now a monument to American defiance. This memorial is now a message to the world: America will never, ever submit to tyranny.”

Commemorations also took place in New York and Washington to mark the anniversary of the 9/11 attacks by al Qaeda, in which nearly 3,000 people were killed. 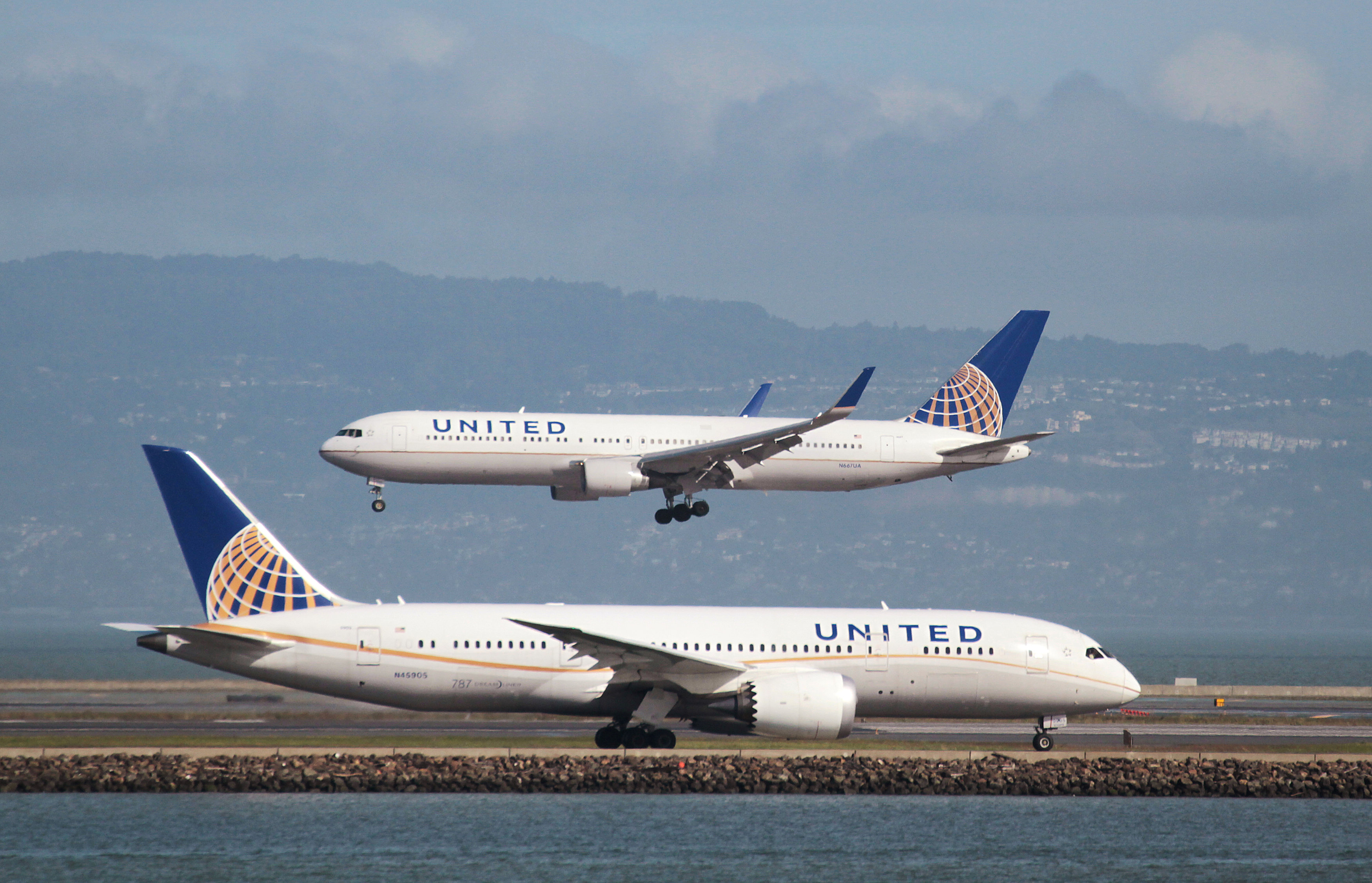 WASHINGTON (Reuters) – Codes to gain access to United Airlines cockpits may have been made public, the carrier said on Monday, but it stopped short of confirming a report that a flight attendant inadvertently published the codes online in a potential threat to air security.

The airline still could keep its flight decks secure through other measures, Maddie King, a spokeswoman for United Continental Holdings Corp, said in an email. She declined to specify the other safeguards because of security considerations.

“We are working to resolve this issue as soon as possible,” she said.

Citing a pilot who was briefed on the matter, the Wall Street Journal reported on Sunday that United, the world’s third-largest airline by revenue, had alerted pilots that access codes to unlock cockpit doors were mistakenly posted on a public website by a flight attendant.

Cockpit security emerged as a top priority for airlines in September 2001, when hijackers took control of United and American Airlines planes and crashed them into New York’s World Trade Center and the Pentagon in Washington. A third airliner commandeered by jihadists crashed in a western Pennsylvania field.

The United unit of the Air Line Pilots Association said in a statement that the accidental leak of information showed the need for stronger protections for flight deck doors.

The union has long backed secondary barriers, which it said would cost $5,000 each, and called on Congress to mandate them.

“The installation of secondary barriers on all passenger aircraft is a simple and cost effective way to bolster the last line of flight deck defense,” the union said.