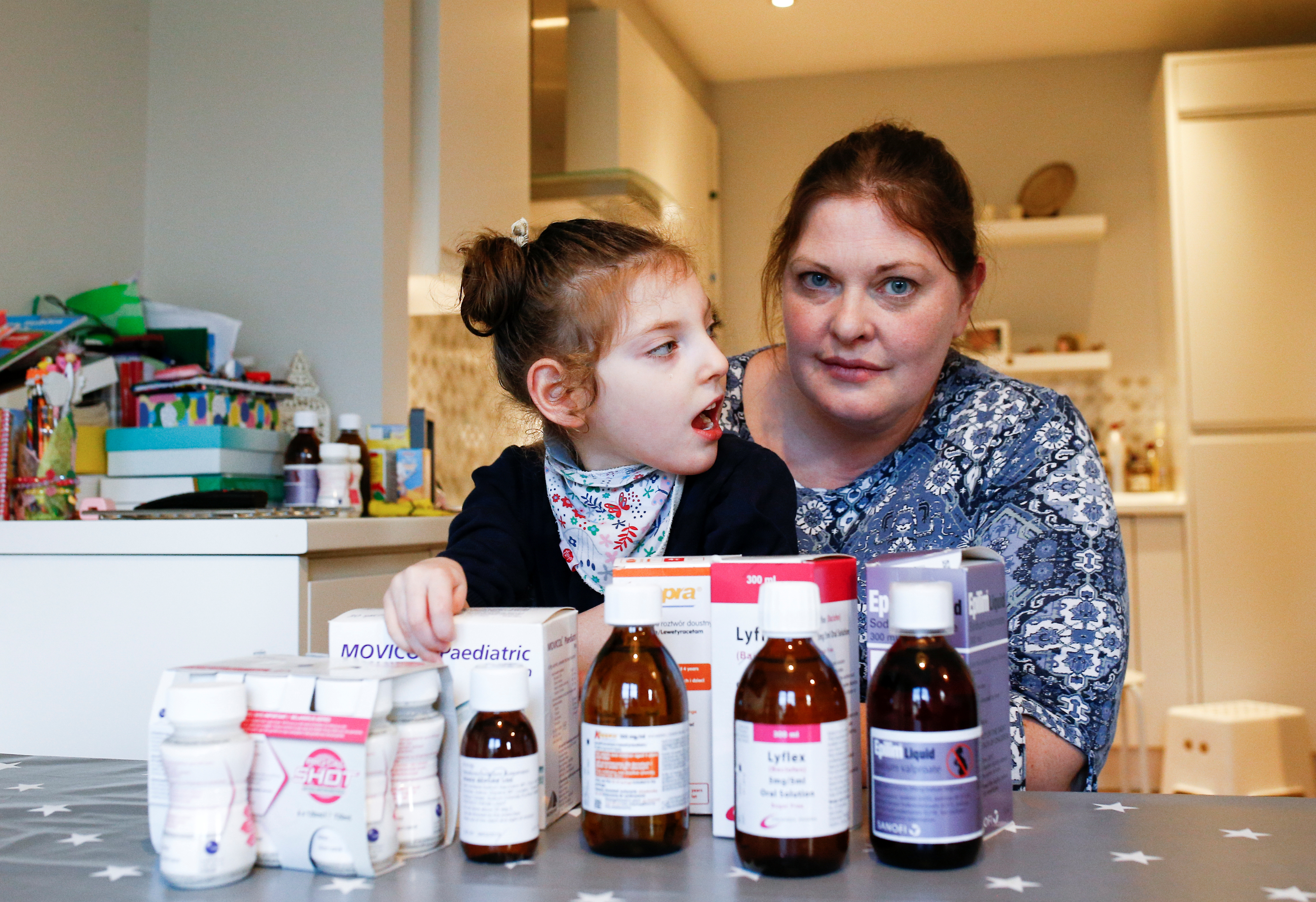 LONDON (Reuters) – With just 56 days until Britain leaves the EU, Jo Elgarf has begun stockpiling food in case politicians fail to strike an exit deal, but she says she cannot do the same with vital drugs her disabled daughter needs.

Four-year-old Nora has cerebral palsy and epilepsy and relies on imported Epilim and Keppra daily to stop her suffering seizures. Elgarf wants to stock up on the drugs in case supplies are hit but she can’t because they are only available on a monthly prescription.

For Nora, “this could be matter of life and death,” Elgarf told Reuters at her home in southwest London.

“It could mean being sent off in an ambulance to hospital with a massive seizure that lasts five minutes plus. She cannot miss those medicines. There’s no ifs and buts about it and we cannot use alternatives either.”

The default position means Britain will leave on March 29 without a deal in place unless something can be agreed beforehand. That has led to fears that supply chains will be severely disrupted leading to shortages of food and medicines.

According to the British government, about three-quarters of medicines used by the state-run National Health Service (NHS) come via the EU. May, a Type 1 diabetic, has said she herself relies on insulin produced in another EU country.

Last August, Health Secretary Matt Hancock outlined plans to ensure Britain had an extra six weeks of supplies in the event of a no-deal Brexit.

In January, he said Britain had bought 5,000 fridges to hold medicines, making him the biggest buyer of fridges in the world, and secured warehouse space. 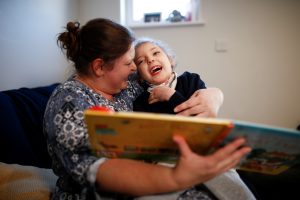 Jo Elgarf sits with her daughter Nora at their home in London, Britain, January 30, 2019. REUTERS/Henry Nicholls

“Making sure patients continue to have access to the medicines they need is paramount…,” said health minister responsible for Brexit planning Stephen Hammond.

“We are working extremely closely with industry to make sure there are significant supplies of these drugs in the UK,” Hammond wrote in an article last week.

But some Britons do not share that confidence, and anecdotal evidence from newspaper readers suggests people are stockpiling everything from children’s painkillers to medicines for serious conditions.

For Elgarf, a member of anti-Brexit Facebook group “48 percent Preppers” – a reference to the percentage that voted to remain in the EU in the 2016 referendum – that is not an option, and that has left her fearful.

“It doesn’t matter even if I had all the money in the world, I can’t go and buy these medicines because they are prescription-only. I have no way of securing my child’s future,” she said.

It is not just patients and their families who are concerned.

The chief executive of a body running hospitals in Birmingham, England’s second-biggest city, warned last week there was a risk operations could be canceled because of a drug shortage.

“In the event of a chaotic, no-deal exit, many NHS trusts could quickly run out of vital medical supplies,” Dr Dave Rosser wrote in a memo to his board of directors.

He said “well-informed and non-political NHS sources” had estimated goods from Europe across the English Channel “could be reduced to between one-third and one-fifth of current daily volumes for a period of at least some months.”

According to the Brexit Health Alliance, an industry body, 45 million patient packs go to the EU from the UK every month, and 37 million packs go the other way.

“Any divergence from these harmonized standards by the UK in the future, and a lack of agreement on cooperation with the EU on medicines and medical devices, would mean that supply chains are at risk,” it said.

One unintended consequence of the concern is that patients stocking up on medicines might bring about problems themselves.

“Hospitals, pharmacies, (family doctor) surgeries and patients should not stockpile medicines at any point during this process,” health minister Hammond said.

“Doing so risks shortages for other patients. If everyone does what they are supposed to, we are confident the supply of medicines will continue uninterrupted whatever the Brexit outcome.” 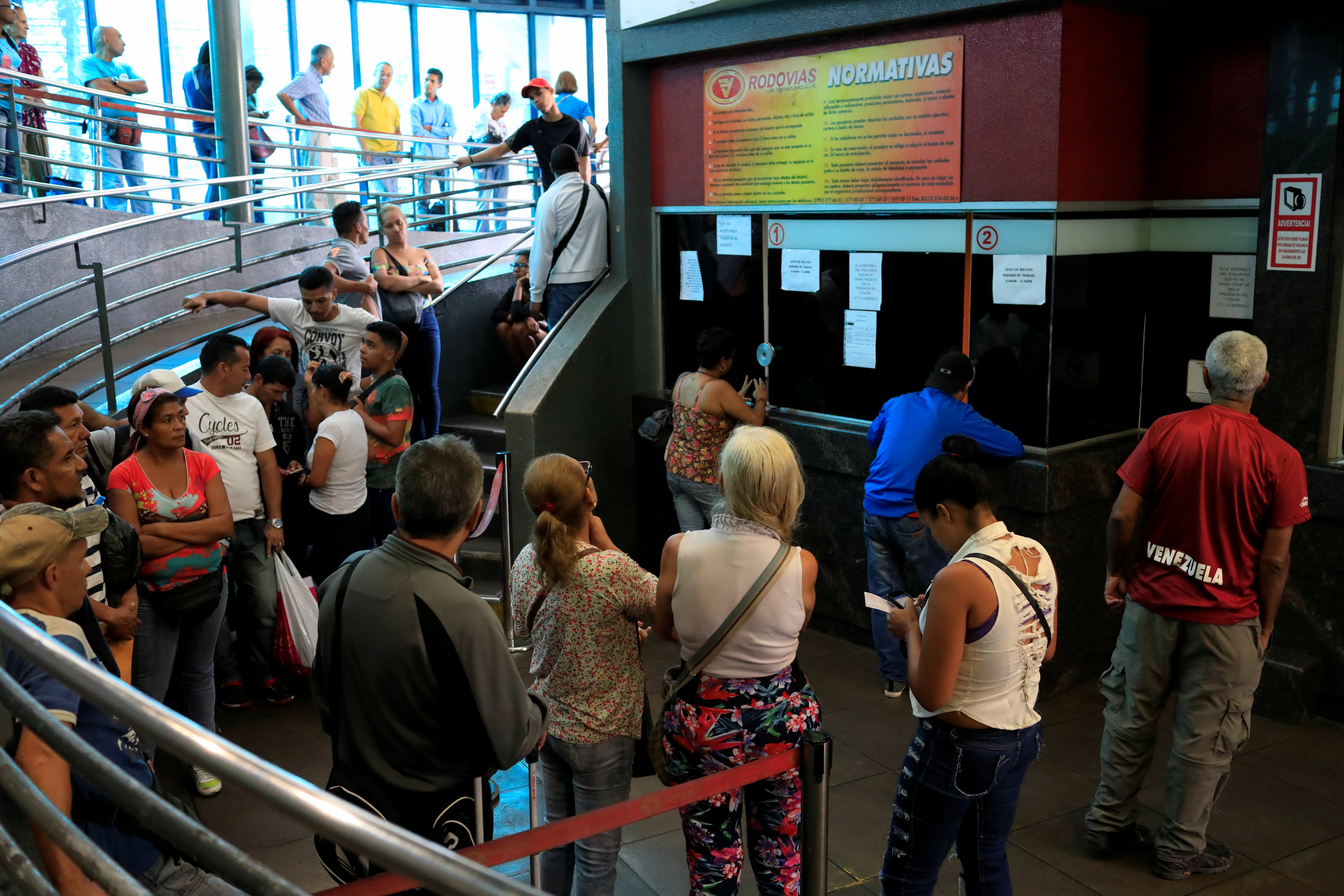 CARACAS (Reuters) – Betsabeth Casique saved for eight months for bus tickets out of Venezuela for herself and her three children. At 1.4 million bolivars each, they are worth what she earns in a month working as a nurse.

It is less than two dollars at the black market exchange rate.

When socialist President Nicolas Maduro won re-election to a six-year term on Sunday in a vote the opposition and foreign governments called illegitimate, Casique decided to leave, first for the western city of San Cristobal and from there to Cucuta, Colombia. 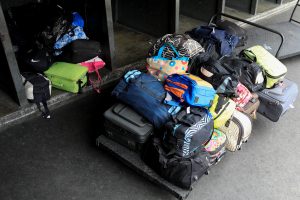 Bags and suitcases are seen at a bus station in Caracas, Venezuela May 21, 2018. REUTERS/Marco Bello

“That was the straw that broke the camel’s back, what pushed me to do it faster,” Casique, 29, said while charging her cell phone outside the Aeroexpresos Ejecutivos terminal in Caracas, where she was planning to buy tickets for a bus leaving on Tuesday.

Ninety-nine people bought tickets on Monday morning for that trip, said Greberli Rojas, a passenger who displayed a handwritten wait-list she was keeping to avoid disputes between passengers trying to fit on the bus.

Rojas, a 29-year-old accountant who arrived from the town of Barlovento in Miranda state and bought her ticket early Monday, planned to spend the night at the station to avoid losing her spot.

“I’m prepared to sell coffee because us migrants have to be prepared to start from the bottom,” said Rojas, who plans to settle in Lima, Peru.

It appeared the emigration crisis Venezuela had experienced in recent years as its economy collapsed would continue since Maduro’s government was unlikely to change policies that led to hyperinflation, food and medicine shortages and rising crime.

The United Nations has estimated that nearly 1 million Venezuelans the country left between 2015 and 2017.

Over the past weekend, migrants streamed across the border, skeptical that their votes would change anything in an election many thought would be rigged. Mainstream opposition called for a boycott and turnout was 46 percent compared with 80 percent in 2013’s presidential election.

“We expected that the incumbents would win, so we decided to leave,” said Jorge Hernandez, a 23-year-old engineering student who sold his Toyota Avalon to buy tickets for himself and his mother to leave Caracas from the Rutas de America terminal on Monday morning.

He brought bread and crackers for the 36-hour trip to Trujillo, Peru, where his sister has been waiting tables for two-and-a-half months.

“This government has been in power for 18 years and things have gone from bad to worse,” he said.