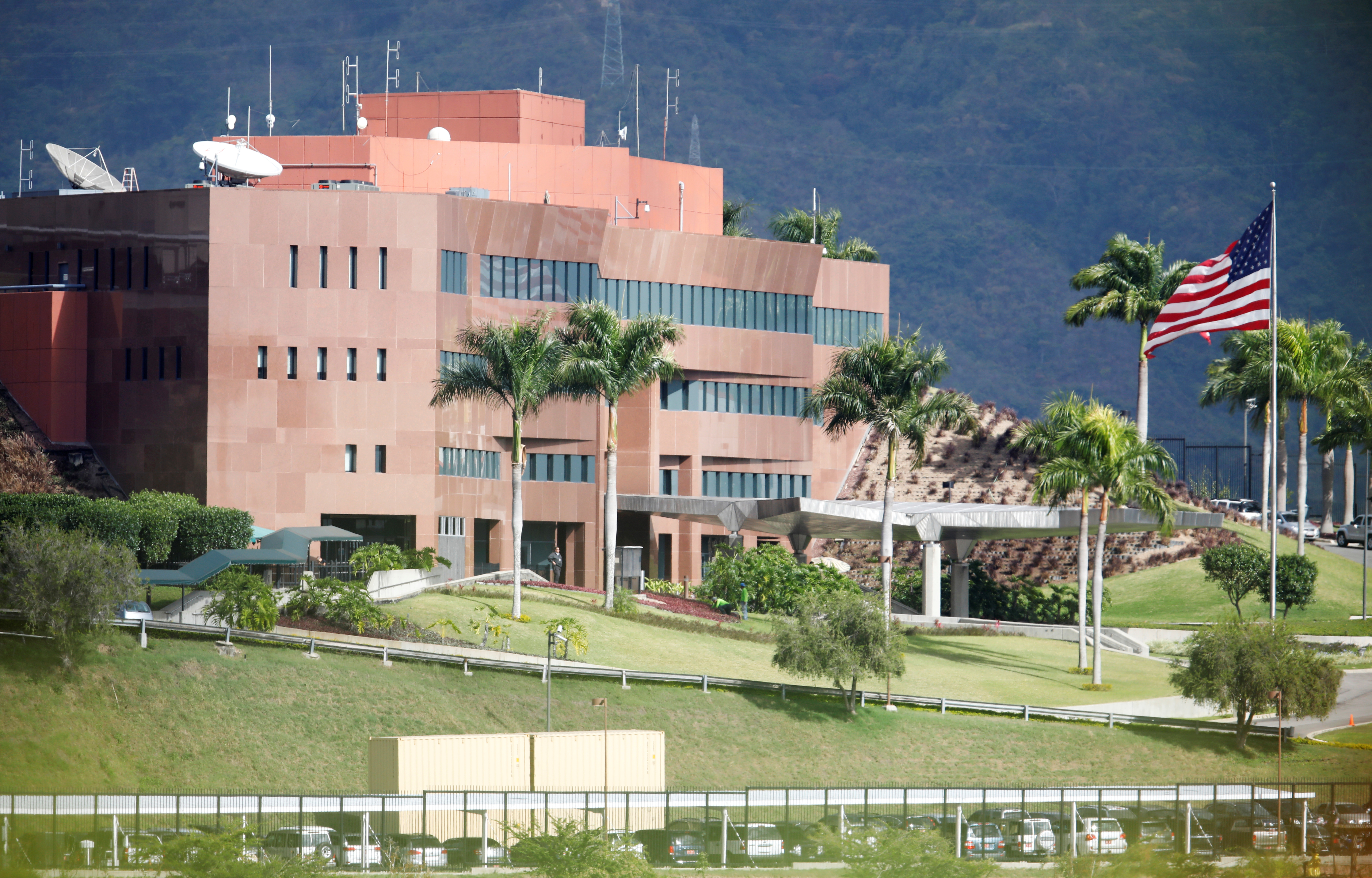 CARACAS (Reuters) – Some U.S. diplomats left the embassy in Caracas for the airport on Friday in a convoy escorted by police, according to a Reuters witness, after Venezuelan President Nicolas Maduro broke off relations with Washington and ordered American personnel out.

The United States has rejected Maduro, a socialist in power since 2013, as the oil-rich nation’s legitimate head of state and has thrown its support behind opposition leader Juan Guaido, the head of Venezuela’s National Assembly.

Guaido, who has galvanized the country’s opposition, proclaimed himself interim president on Wednesday. But he still has no control over the state’s functions, which remain loyal to Maduro despite a deep economic and political crisis. 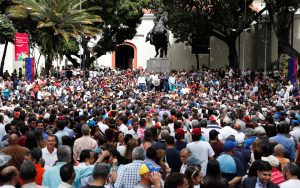 The State Department has ordered some U.S. government workers to leave Venezuela and said U.S. citizens should consider leaving the South American country.

It did not immediately respond to a request for comment on the movement of embassy personnel on Friday.

A Reuters witness at around 8:30 a.m. local time (1230 GMT) saw a convoy of sport utility vehicles accompanied by police motorcycles and vehicles with flashing lights drive onto a Caracas highway in the direction of the airport. Other police blocked regular traffic.

Another video circulating on social media showed the same caravan leaving the embassy, a fortified compound overlooking the city center.

Maduro, in a fiery speech on Wednesday, said he was cutting off diplomatic relations with the United States for instigating a “coup” against him, though U.S. President Donald Trump’s administration then said its relations would be with Guaido.

To ratchet up pressure on Maduro, who began a second term on Jan. 10 following an election last year widely considered to be a fraud, the United States is seeking to cut off funds for his government, U.S. officials said on Thursday.

Both Guaido, who has not appeared in public since mass anti-government protests on Wednesday, and Maduro are scheduled to hold press conferences on Friday.

In an interview with broadcaster Univision on Thursday, Guaido described the recent events as “the beginning of the end” for Maduro, who has presided over Venezuela’s worst ever economic crisis. Guaido said he would work to guarantee humanitarian aid and take new measures to pressure Maduro.

“Our challenge is to secure free elections, and we want them as soon as possible. But we are living in a dictatorship,” he said, from an undisclosed location. 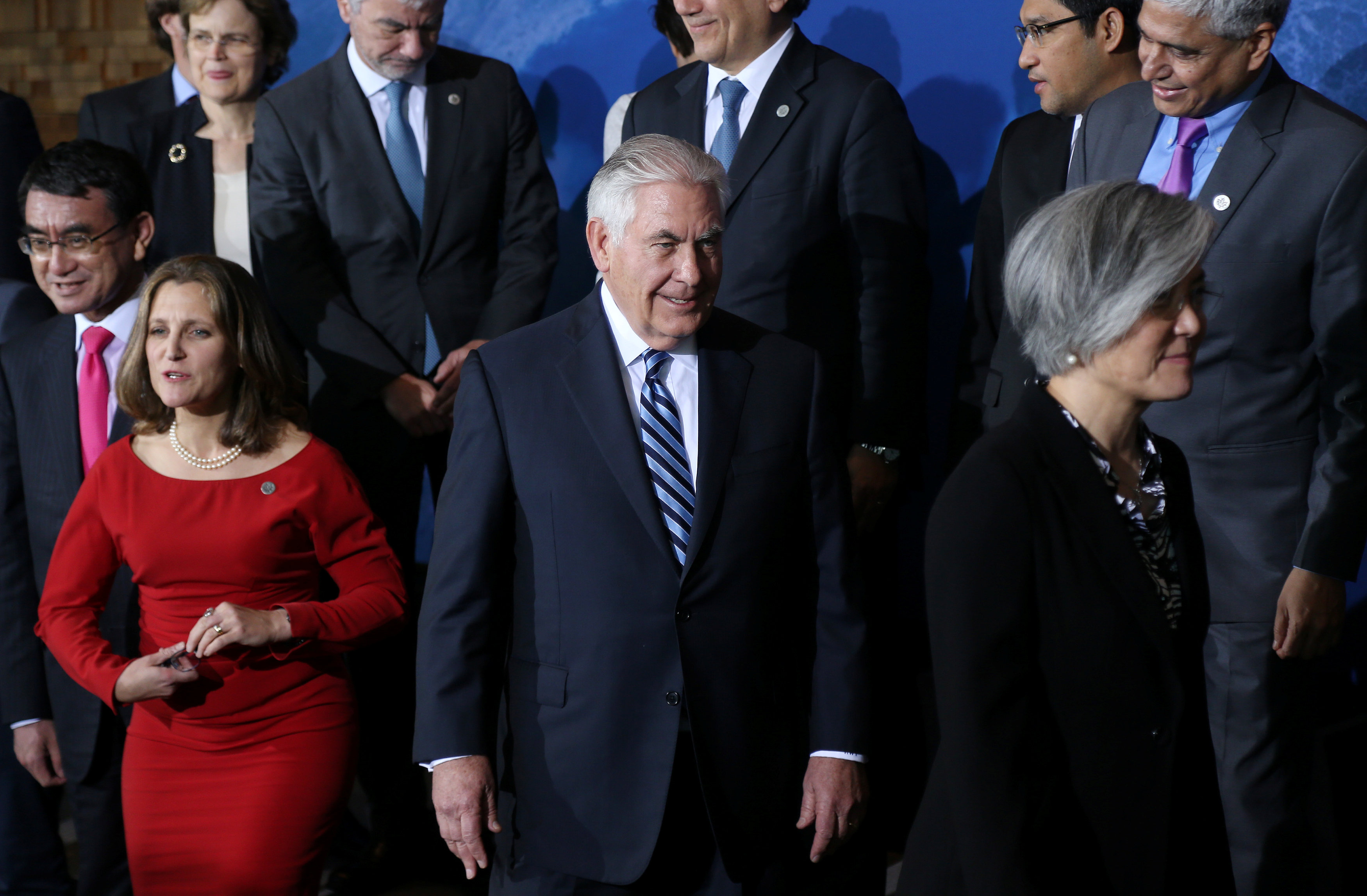 Secretary of State Rex Tillerson, in a speech at Stanford University, called for “patience” on Assad’s departure – the clearest indication yet of an acknowledgment that Russia and Iran have bolstered Assad and that he is unlikely to leave power immediately.

Billed as the Trump administration’s new strategy on Syria, the announcement will prolong the risks and redefine the mission for the U.S. military, which has for years sought to define its operations in Syria along more narrow lines of battling Islamic State and has about 2,000 U.S. ground forces in the country.

While much of the U.S. strategy would focus on diplomatic efforts, Tillerson said:

“But let us be clear: the United States will maintain a military presence in Syria, focused on ensuring ISIS cannot re-emerge,” while acknowledging many Americans’ skepticism of military involvement in conflicts abroad, Tillerson said.

U.S. forces in Syria have already faced direct threats from Syrian and Iranian-backed forces, leading to the shoot-down of Iranian drones and a Syrian jet last year, as well as to tensions with Russia.

Trump administration officials, including Defense Secretary Jim Mattis, had previously disclosed elements of the policy but Tillerson’s speech was meant to formalize and clearly define it.

A U.S. disengagement from Syria would provide Iran with an opportunity to reinforce its position in Syria, Tillerson said.

As candidate, U.S. President Donald Trump was critical of his predecessors’ military interventions in the Middle East and Afghanistan. As president, however, Trump has had to commit to an open-ended presence in Afghanistan and, now, Syria.

The transition to what appears to be open-ended stability operations in Syria could leave those U.S.-backed forces vulnerable to shifting alliances, power struggles and miscommunications as Assad’s allies and enemies vie for greater control of post-war Syria.

After nearly seven years of war, hundreds of thousands of Syrians killed and a humanitarian disaster, Tillerson asked nations to keep up economic pressure on Assad but provide aid to areas no longer under Islamic State’s control.

“Responsible change may not come as immediately as some hope for, but rather through an incremental process of constitutional reform and U.N.-supervised elections. But that change will come,” he said.

“This is the first time Washington has said clearly it has U.S. interests in Syria that it is ready to defend,” Bahra told Reuters.

The top U.S. diplomat said Washington would carry out “stabilization initiatives” such as clearing landmines and restoring basic utilities in areas no longer under Islamic State control, while making clear that “‘stabilization’ is not a synonym for open-ended nation-building or a synonym for reconstruction. But it is essential.”

Tillerson said the United States would “vigorously support” a United Nations process to end the conflict, a so-far stalled process, and called on Russia, a main supporter of Assad, to “put new levels of pressure” on the Syrian government to “credibly engage” with U.N. peace efforts.

The United Nations Special Envoy for Syria said on Wednesday he had invited the Syrian government and opposition to a special meeting next week in Vienna.

But it was not immediately clear how or why Moscow would heed Washington’s oft-repeated demands.

James Jeffrey, a former U.S. ambassador to Turkey and Iraq who served as a deputy national security adviser to President George W. Bush, said that while Tillerson set down the broad parameters of a first comprehensive U.S. strategy for Syria, he left major questions unanswered.

“It’s full of holes like Swiss cheese, but before we just had the holes,” said Jeffrey, a fellow at the Washington Institute for Near East Policy.

Key questions that Tillerson left unaddressed, he continued, included how long Assad should remain in power and whether he would play a role in any political transition.

Tillerson praised Turkey’s role in taking on Islamic State. Ties between the two countries have been strained over U.S. support for the Syrian Democratic forces, the mainly Kurdish-led militias fighting Islamic State in northern Syria with the help of U.S. forces.

The U.S.-led coalition said on Sunday it was working with the SDF to set up a 30,000-strong force that would operate along the borders with Turkey and Iraq, as well as within Syria.

Assad responded by vowing to crush the new force and drive U.S. troops from Syria. Russia called the plans a plot to dismember Syria and place part of it under U.S. control, and Turkey described the force as a “terror army.” 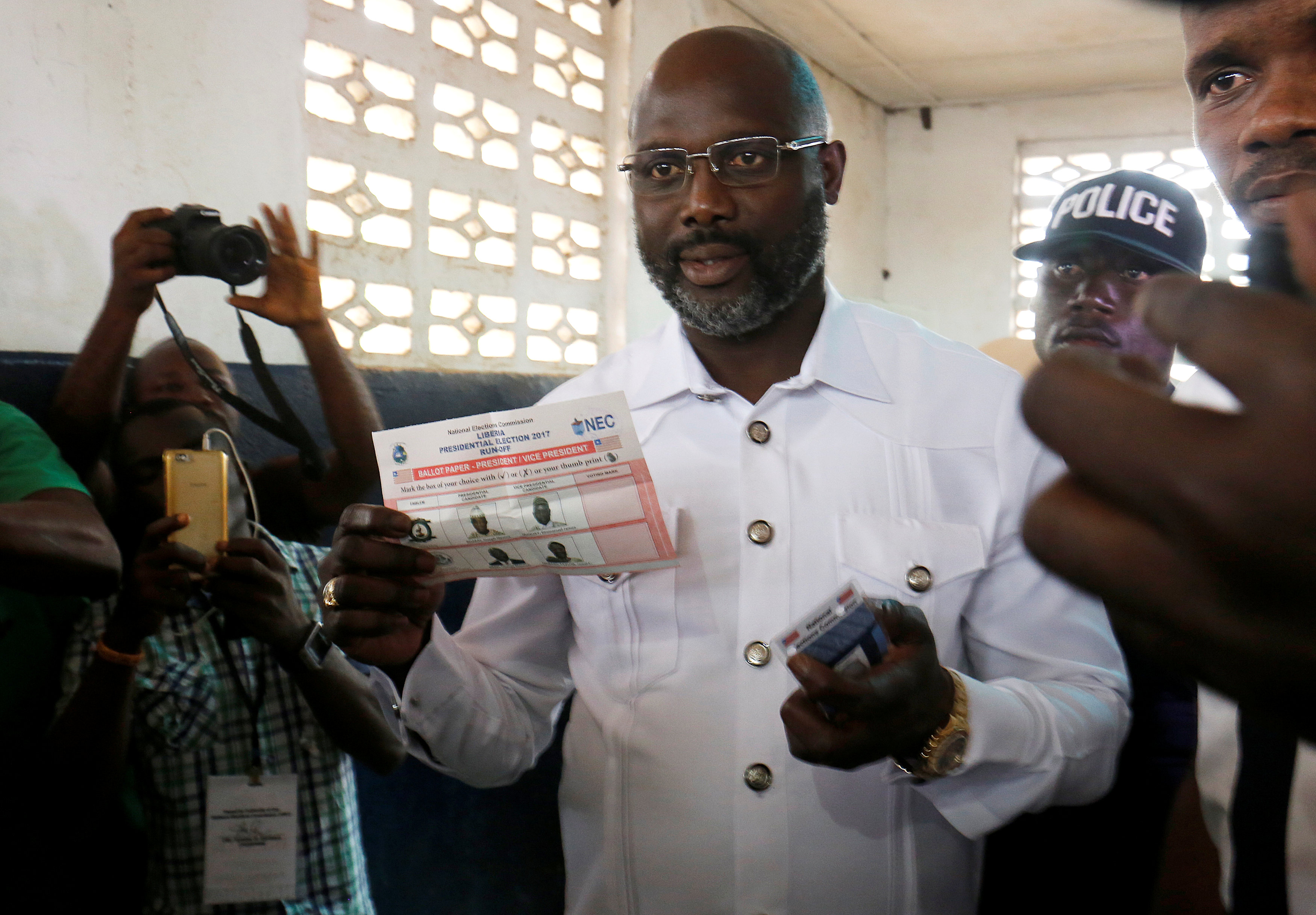 MONROVIA (Reuters) – Liberians went to the polls on Tuesday for a presidential election they hope will mark their first democratic transfer of power in more than seven decades, despite allegations of fraud.

Former world footballer of the year George Weah is squaring up against vice president Joseph Boakai, both of them promising to tackle poverty and corruption in a country where most citizens have no reliable electricity or clean drinking water.

They are bidding to succeed Ellen Johnson Sirleaf in a run-off vote delayed for more than a month after Boakai and another candidate alleged widespread fraud in October’s first-round vote, a challenge that the Supreme Court rejected this month.

There were no reports of violence as voting proceeded under sunny skies in the capital Monrovia. Election agents told Reuters first indications pointed to a lower turnout than in the first round.

“It is great day for Liberia – a test day for democracy,” said Boakai after casting his vote in Paynesville. “We will accept the results provided they meet all the standards.”

Officials said results were expected in the next few days, declining to give a specific date.

Johnson Sirleaf’s 12-year rule cemented peace in the West African country after civil war ended in 2003, and brought in much needed aid.

But critics, including much of the country’s youth, say her administration was marred by corruption and that she did little to raise most Liberians out of dire poverty.

Liberia was also racked by the Ebola crisis, which killed thousands between 2014 and 2016, while a drop in iron ore prices since 2014 has dented export revenues.

Weah, world footballer of the year in 1995, won with 38 percent in the first round versus Boakai’s 29 percent.

“I voted George Weah because I believe that he will do better for me and my country. I want change,” said Miama Kamara, a 32-year-old businesswoman, after casting her ballot in the capital.

Observers from the U.S.-based National Democratic Institute said polling stations were better organised than in the first round.

The National Elections Commission said there were isolated incidents of voting irregularities, including one woman caught trying to vote twice, but no sign of widespread graft.

“So far the election process has been smooth and there are marked improvements on the Oct. 10 poll,” NEC said.

Boakai has found it harder to convince voters that he will bring change, given that he worked alongside Johnson Sirleaf for 12 years. Weah, by contrast, has won the hearts of mostly young Liberians through his star performances for Europe’s biggest football teams in the 1990s.

His arrival at a polling station in Paynesville was met with cheers by a crowd of supporters. 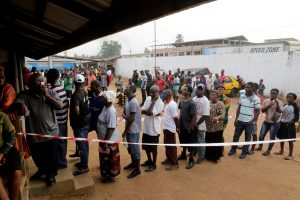 People wait to vote during the presidential election at a polling station in Monrovia, Liberia December 26, 2017. REUTERS/Thierry Gouegnon

“My focus now is to win,” he told reporters. “From there, I am going to get on the drawing board with my team and then we’ll put a plan together to move our country forward.”

Some however are wary of Weah’s lack of political experience, education and concrete policy.

“Boakai understands diplomacy,” said McArthur Nuah Kermah, a school registrar in Paynesville. “Weah is not experienced and doesn’t know the workings of government.”

Turnout appeared low on the day after the Christmas holiday, in contrast to the high turnout for the first round, although official figures are yet to be released.

NEC did its best to rally young voters and conjure a sense of occasion in a morning Twitter post.

“First-time voters MUST vote on December 26 Run-Off elections,” its tweet said. “This is the first big process you are a part of … you must complete it in order to be a part of tomorrow’s glorious and democratic Liberia!”