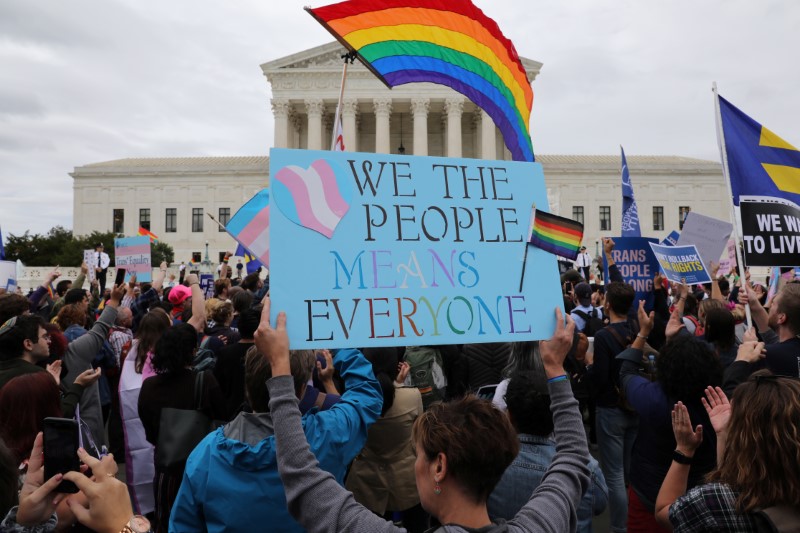 WASHINGTON (Reuters) – U.S. Supreme Court justices on Tuesday appeared divided over whether a landmark decades-old federal law prohibiting sex discrimination in the workplace protects gay and lesbian employees as they heard arguments in one of the biggest cases of their current term.

Liberal justices signaled sympathy toward arguments that gay workers are covered under Title VII of the Civil Rights Act of 1964, which forbids employers from discriminating against employees on the basis of sex as well as race, color, national origin and religion.

Some conservative justices expressed reservations toward extending protection to gay employees. However, one of them, Justice Neil Gorsuch, asked questions of both sides indicating potential sympathy for the workers. When analyzing whether a person was fired on the basis of sexual orientation, Gorsuch said sex seemed to be a “contributing cause.”

Conservative Justice Samuel Alito said that if the court decides that Title VII protects gays and lesbians it would effectively be rewriting a law enacted by Congress in a way that was never intended by the lawmakers who passed it. Alito said the Supreme Court would be seen as deciding “a major policy question” that Congress would normally legislate on.

The second of two oral arguments was still underway, focusing on whether transgender workers are protected under the same law.

LGBT rights activists held a demonstration near the courthouse as the arguments took place. The arguments were held on the second day of the court’s new nine-month term.

The Supreme Court delivered an important gay rights decision in 2015 legalizing same-sex marriage nationwide. Its dynamics on LGBT issues, however, changed following the 2018 retirement of Justice Anthony Kennedy, a conservative who backed gay rights in major cases and wrote the same-sex marriage ruling.

The legal fight focuses on the definition of “sex” in Title VII. The plaintiffs, along with civil rights groups and many large companies, have argued that discriminating against gay and transgender workers is inherently based on their sex and consequently is illegal.

A couple of hundred demonstrators advocating for LGBT rights gathered a short distance from the white marble courthouse on an overcast day in the U.S. capital. They chanted for equal rights and held signs including ones that read, “Do fire Trump. Don’t fire LGBTQ workers,” “Discrimination is bad for business” and “LGBT Americans power our economy.”

Police moved demonstrators away from the plaza in front of the courthouse due to concern over “suspicious” packages.

“I am here because I’m a queer person and right now my right to live my life as everyone else is being determined by nine people, none of whom are queer, all of whom are cisgender,” said Washington resident Raegan Davis, 21. “I feel like it’s important for our voices to be part of this conversation because if we aren’t here there’s no guarantee that they will.”

‘THIS HAS TO STOP’

A small group of demonstrators opposing gay and transgender rights also was present holding signs including two that read, “Fear God” and “Sin and shame, not pride.”

“This has to stop. The more and more we give to the homosexual community, the more and more this nation is going to be destroyed,” said Jacob Phelps, 36, from Topeka, Kansas, who held a sign that read, “Jesus will return in wrath.” “It’s very easy in the workplace, shut your mouth, do what you’re supposed to do.”

The arguments presented the court with its first major test on gay and transgender rights since Trump appointed Kavanaugh to replace Kennedy, with the four liberal justices sympathetic to LGBT rights. Kavanaugh, whose approach to gay rights is unclear, could provide a pivotal vote.

A ruling in favor of the plaintiffs would give gay and transgender workers greater protections, especially in the 28 U.S. states that do not already have comprehensive measures against employment discrimination. A ruling against the plaintiffs would mean gay and transgender people in those states would have few options to challenge workplace discrimination.

The court heard two cases about gay people who have said they were fired due to their sexual orientation. One involves a former county child welfare services coordinator from Georgia named Gerald Bostock. The other involves a New York skydiving instructor named Donald Zarda. He died after the case began and the matter is being pursued by his estate.

It also heard a third case that involved a Detroit funeral home’s bid to reverse a lower court ruling that it violated Title VII by firing a transgender funeral director named Aimee Stephens after Stephens revealed plans to transition from male to female.

Rulings in the cases are due by the end of June.

Trump, a Republican with vigorous support among evangelical Christian voters, has pursued policies taking aim at gay and transgender rights. His administration has supported the right of certain businesses to refuse to serve gay people on the basis of religious objections to gay marriage, restricted transgender service members in the military and rescinded protections on bathroom access for transgender students in public schools.

Trump’s Justice Department and the employers in the cases have argued that Congress did not intend for Title VII to cover gay and transgender people when it passed the law. Conservative religious groups and various Republican-led states back the administration.

Big business, typically eager to avoid liability in employment disputes, is backing the LGBT plaintiffs. More than 200 companies, including Amazon, Alphabet Inc’s Google and Bank of America Corp, joined a friend-of-the-court brief asking the justices to rule in favor of the plaintiffs.

(Reporting by Lawrence Hurley and Andrew Chung; Additional reporting by Maria Caspani; Editing by Will Dunham)