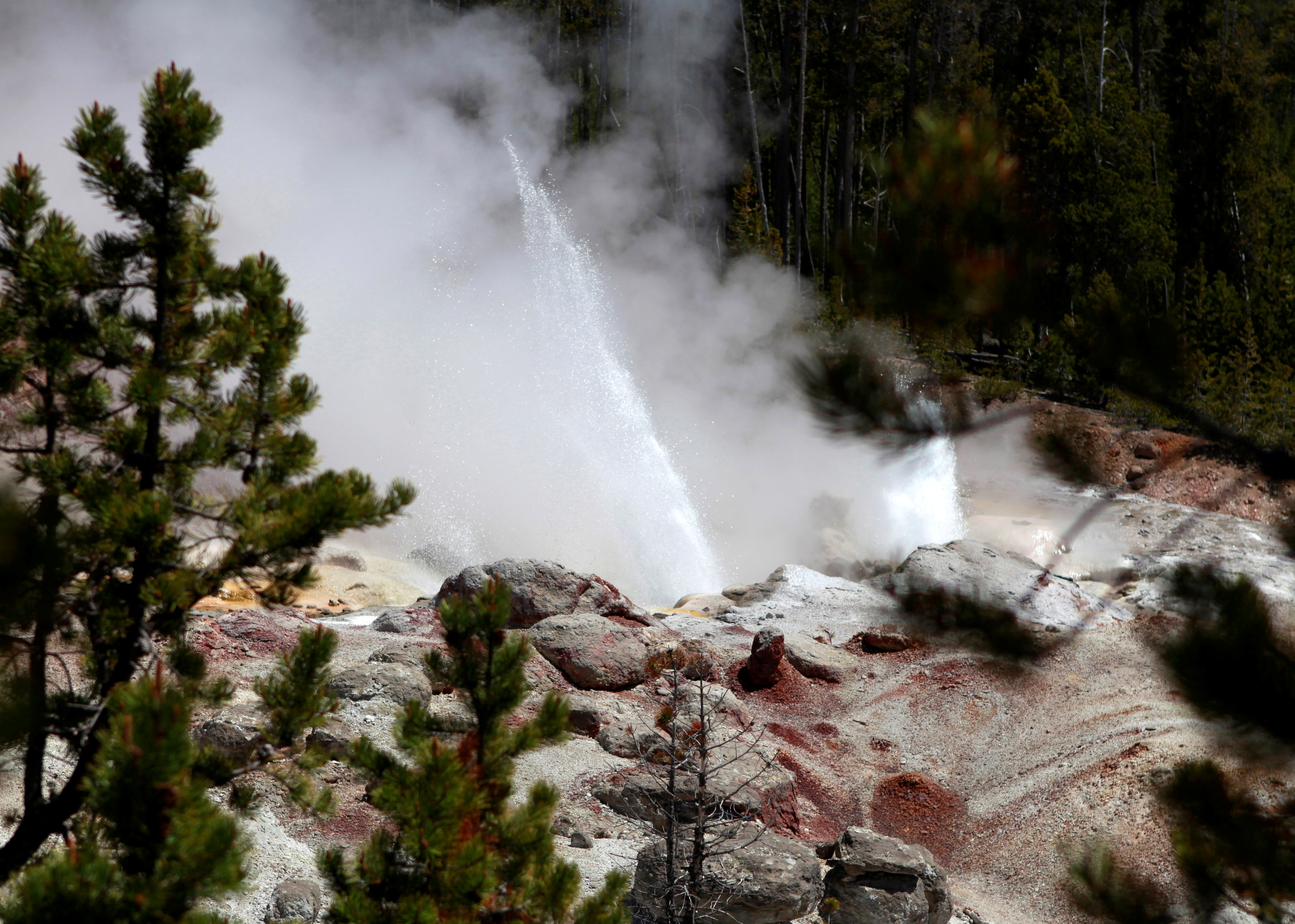 (Reuters) – The world’s largest active geyser has erupted three times in the past six weeks at Yellowstone National Park, including once this week, in a pattern that is unusual but not at all indicative of a more destructive volcanic eruption brewing beneath Wyoming, geologists said on Saturday.

Steamboat Geyser, which can shoot water as high as 300 feet (91 meters) into the air, erupted on March 15, April 19 and on Friday. The last time it erupted three times in a year was in 2003, the U.S. Geological Survey’s Yellowstone Volcano Observatory said.

The last time it erupted prior to March was more than three years ago in September 2014.

“There is nothing to indicate that any sort of volcanic eruption is imminent,” Michael Poland, the scientist in charge for the observatory, said in an email.

This year’s eruptions have been smaller than a usual Steamboat eruption, but the two in April were about 10 times larger than an eruption at the park’s famed Old Faithful Geyser in terms on the amount of water discharged, he said.

Geologists have not pinpointed a reason for the latest series of eruptions, but say they could indicate a thermal disturbance in the geyser basin, or that Steamboat may be having smaller eruptions instead of one large.

Since most geysers do not erupt on a regular schedule, “it might just reflect the randomness of geysers,” Poland said.

Only Waimangu Geyser in New Zealand has rocketed to greater heights than Steamboat, but not for more than 100 years, the U.S. National Park Service said.

Yellowstone sits atop a volcano that created a vast crater. Its plateau hosts the world’s most diverse and expansive continental hydrothermal systems, including the multicolored springs, mudpots and geysers for which the park is known.

While the Steamboat eruptions are unusual, what would be far more worrying would be the water in the hydrothermal systems drying up, which could indicate that the super hot magma deep below was making its way to the surface.

“Yellowstone hasn’t had a volcanic eruption for 70,000 years! Geysers erupt all the time,” said Jake Lowenstern, a USGS research geologist who specializes in volcanoes.

(Reporting by Jon Herskovitz; Editing by Daniel Wallis and XX)

University of Utah seismographic stations recorded the quake at 6:34 a.m. Sunday morning about 4 miles north-northeast of the Norris Geyser Basin.

The quake was far enough from residential areas to not cause significant damage but border towns in Montana about 20 miles from the epicenter reported significant shaking.  Park rangers say that the park is very sparsely populated during this time of the year.

The USGS reported at least four aftershocks between magnitude 3.1 and 3.3.

Scientists have been watching the caldera of the Yellowstone Super Volcano closely as it has been rising since 2004, however, they said the recent quake is not the sign of an imminent eruption.

The quake comes less than two weeks after residents and reporters began to notice large migrations of bison and other animals away from the park.  One video posted on YouTube March 20th showed a herd of bison running down a highway as if a predator was chasing them.

A crater six feet wide and three feet deep appeared overnight near the end of a runway at Rome’s airport, spewing clouds of toxic gas 15 feet into the air.

The crater was discovered by drivers Saturday morning in the middle of a roundabout 900 feet from a runway’s end. Crowds had gathered to look at the crater until firefighters and vulcanologists closed the area because of deadly gas believed to be a mix of carbon dioxide, hydrogen sulfide and methane. END_OF_DOCUMENT_TOKEN_TO_BE_REPLACED