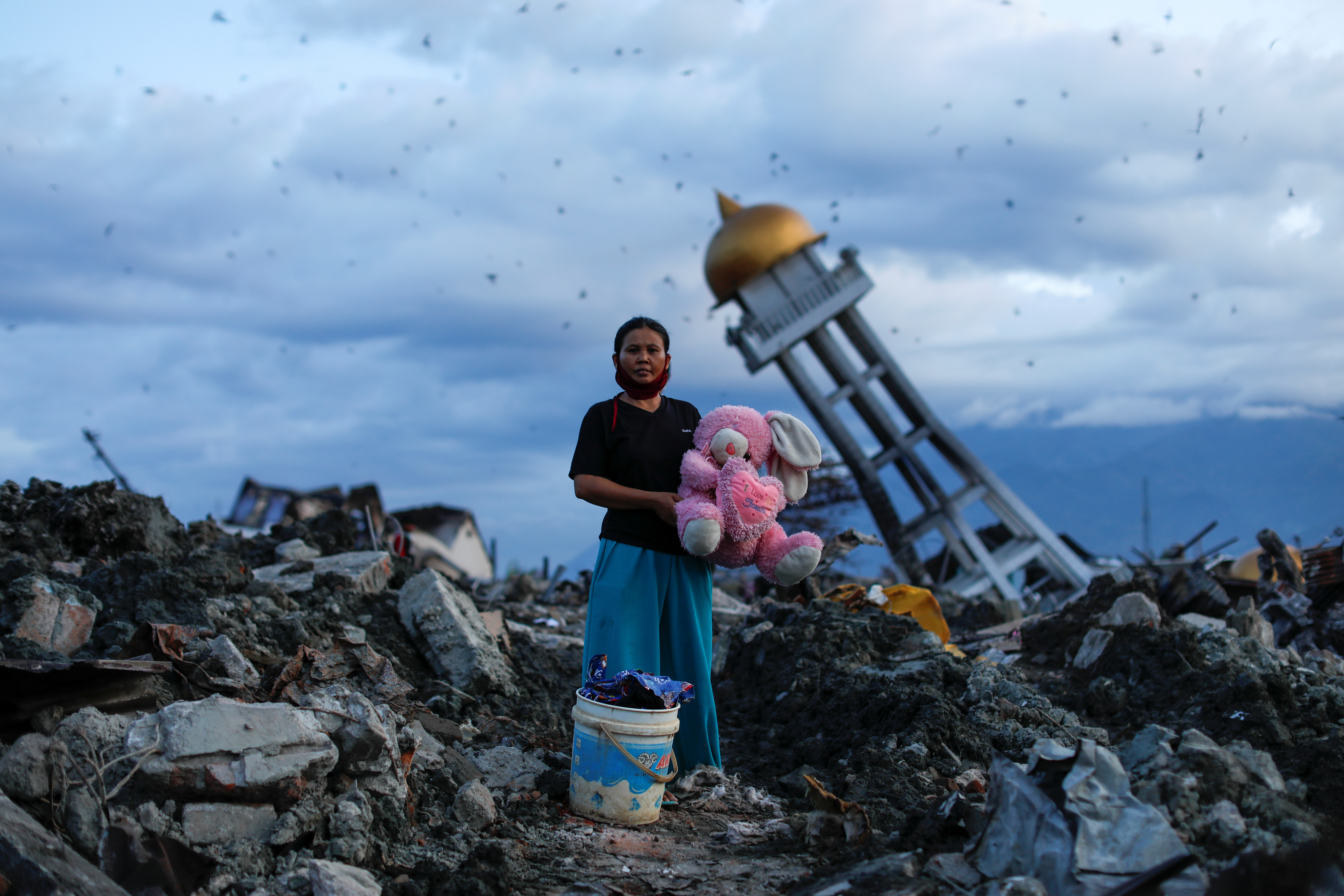 After an earthquake of magnitude 7.5 hit Indonesia’s coastal city of Palu, a pile of broken pink concrete is all that remains of fruit vendor Kaharuddin’s home.

He stared quietly at the rubble in his hometown of Balaroa, saying it concealed the body of his one-year-old daughter, who was among the hundreds missing after the Sept. 28 disaster. 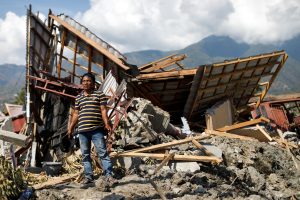 Kaharuddin, 40, waits for excavators to dig up a pile of concrete that used to be his home and was destroyed by an earthquake in Balaroa neighbourhood, Palu, Central Sulawesi, Indonesia, October 10, 2018. REUTERS/Jorge Silva

“I’m just waiting here and hope that I can find my child,” said Kaharuddin, 40, who goes by one name, like many Indonesians. “Or maybe I have to accept that one will have to remain buried here.”

Four days after the quake, he said, rescue workers found the remains of his wife, Hastuti, still holding in her arms the bodies of their other two daughters, aged four and two.

As many as 5,000 people may still be buried under the mud, disaster relief officials estimate. Indonesia called off the search for victims on Friday, two weeks after the quake, citing health concerns, despite residents’ pleas to continue.

The town in the province of central Sulawesi was among those hardest hit by the phenomenon of ground liquefaction, when the shaking earth turns soft, damp soil into a roiling quagmire, dragging thousands of houses and people under mud and asphalt.

The destructive waves of soil smashed thousands of homes, cars, and buildings into each other, carrying some of them hundreds of meters from their original position within minutes. 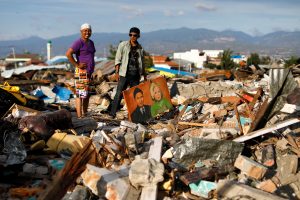 Two men recover a portrait of their dead parents from the rubble of their former house hit by an earthquake in Balaroa neighbourhood in Palu, Central Sulawesi, Indonesia, October 7, 2018. REUTERS/Jorge Silva

“It felt like the earth was alive,” said Darmi, 48, who saw half of her two-story home collapse. “It was opening up, swallowing people, and then closing again. And the noise was so loud. This loud cracking ‘k-k-k-k’ sound.”

Returning to Balaroa for the first time two weeks after the disaster, Hesti Andayani, 27, was shocked to find her childhood home had slid downhill, far from its original location.

“It took so long to find,” she said, through tears. “I don’t know where we can live now.”

Hesti, who lost her younger sister in the quake, sat on a pile of tiles that once covered part of her second-floor bedroom, surrounded by dusty jewelry and cosmetics.

“These are all the things I have left. My makeup, my necklaces, the pins for my hijab,” she sobbed, referring to the headgear worn by devout Muslim women.

Searchers arrived with dozens of excavators to help dig out bodies, while some residents made frequent trips to retrieve treasured belongings from the rubble of destroyed homes.

“I bought this car for my parents,” he said. “They’re gone now but it’s still a good car. It’s the only thing of theirs I can recover.”

He was forced to watch helplessly as his parents and niece suffocated to death after the quake trapped them in a concrete hole flooded with water.

“I found them the morning after the earthquake,” Yassir said. 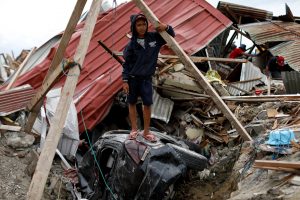 “I managed to speak with them, even gave them some water to drink. But they were crushed against each other, and the water must have been cold. After a while, they just stopped breathing.”

Others must reconcile themselves to the loss of loved ones.

In Petobo, about 12 km (7.5 miles) away, Ameriyah, 56, lost three of her children, a grandchild and a son-in-law. She has accepted it is unlikely that searchers will now uncover their remains.

“We’ve held funeral prayers for them, so we hope their souls will be at peace,” she said.

“I don’t know what to do next. There’s nothing left for me here,” said Kaharuddin, the fruit vendor still looking for his daughter’s body under the pink concrete rubble of their former home.