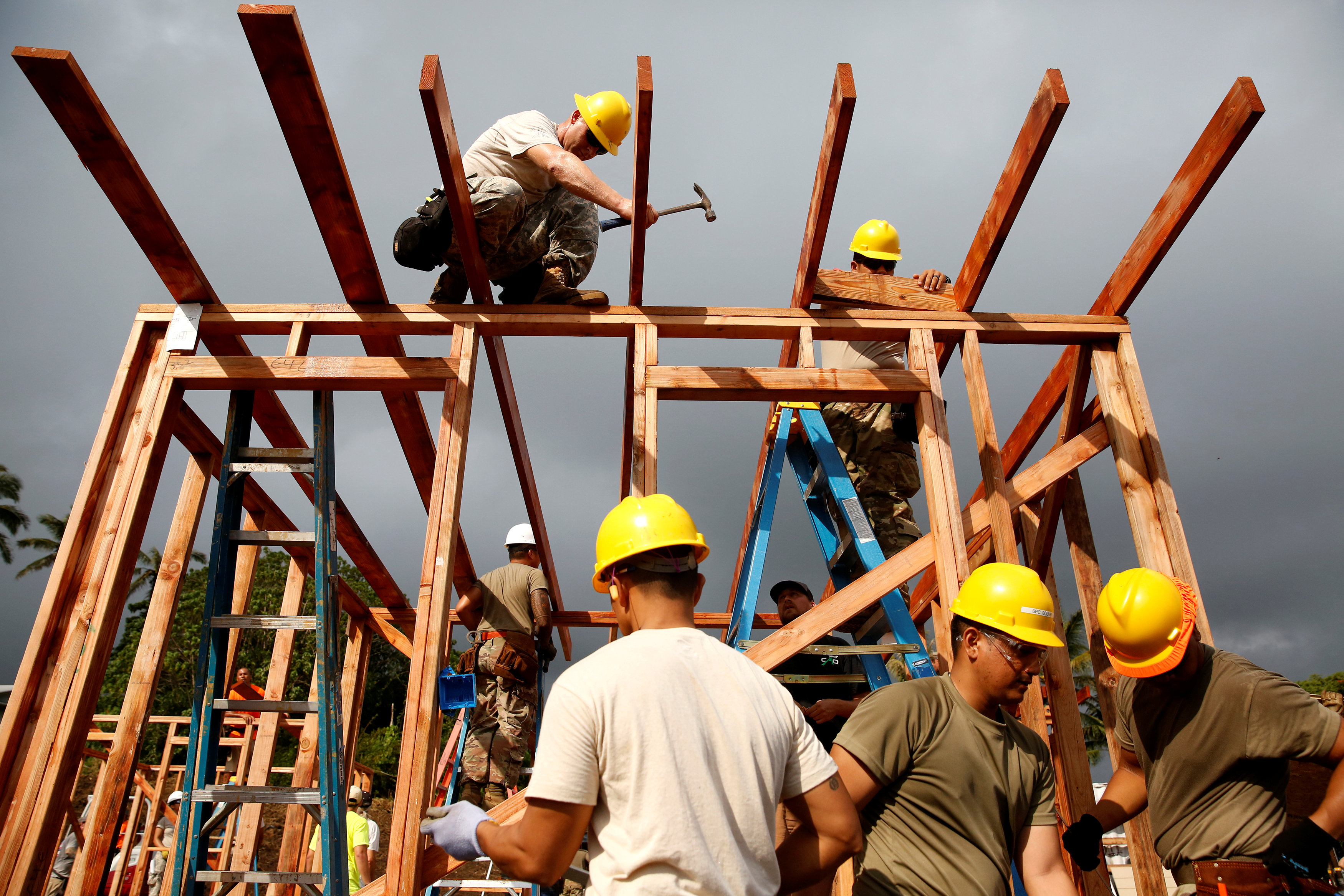 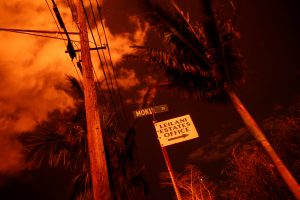 Lava illuminates a sign in Leilani Estates during ongoing eruptions of the Kilauea Volcano in Hawaii, U.S., June 9, 2018. REUTERS/Terray Sylvester

Lava flows from the volcano have swallowed some 600 homes on the Big Island of Hawaii in the past month in the island’s most destructive eruption in modern times.

The Hawaii National Guard, the Hawaii Regional Council of Carpenters and various businesses and non-profit organizations gathered in a field behind the Sacred Heart Church in Pahoa to start construction on the first hard-sided, insulated, wired, private structures to be built for evacuees.

“I’ve been surrounded by so much sadness for so many days and weeks, it’s good to be here surrounded by hope,” Kim told Reuters after a blessing ceremony.

Some neighborhoods in the eastern corner of the Big Island have been buried by lava and destroyed. Others are inaccessible but intact, cut off by walls of lava. At the same time, some people remain in their homes in the Leilani Estates neighborhood, risking exposure to toxic gases.

Evacuees have been staying with friends and relatives, in emergency shelters, or have rented or purchased new homes.

The new homes, expected to be completed this weekend, will house one family each, offering more privacy than the emergency shelters. Families will move in next week, said Major Allison Stephens, a spokeswoman for the Hawaii National Guard. 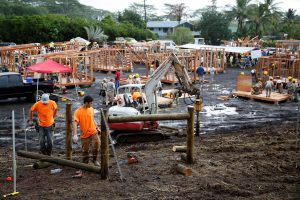 The volunteer construction workers included people who lost their homes or had relatives who did, said Dean Au of the Hawaii Regional Council of Carpenters.

“They’re doing it because they care. To me, that’s why it’s special,” the Reverend Piilani Kaawaloa said.

The homes, at 10 feet by 12 feet (3 by 4 meters), are intended as transitional, weatherproof housing where families may stay for two or three months, officials said.

Another 25 units will be built on a adjacent lot also belonging to the Sacred Heart Church.

The eruption, which entered its 38th day on Saturday, stands as the most destructive in the United States since at least the cataclysmic 1980 eruption of Mount St. Helens in Washington state that reduced hundreds of square miles to wasteland, according to geologist Scott Rowland, a volcanologist at the University of Hawaii at Manoa.

A similar, extremely violent eruption from Fuego volcano in Guatemala this week killed more than 100 people. 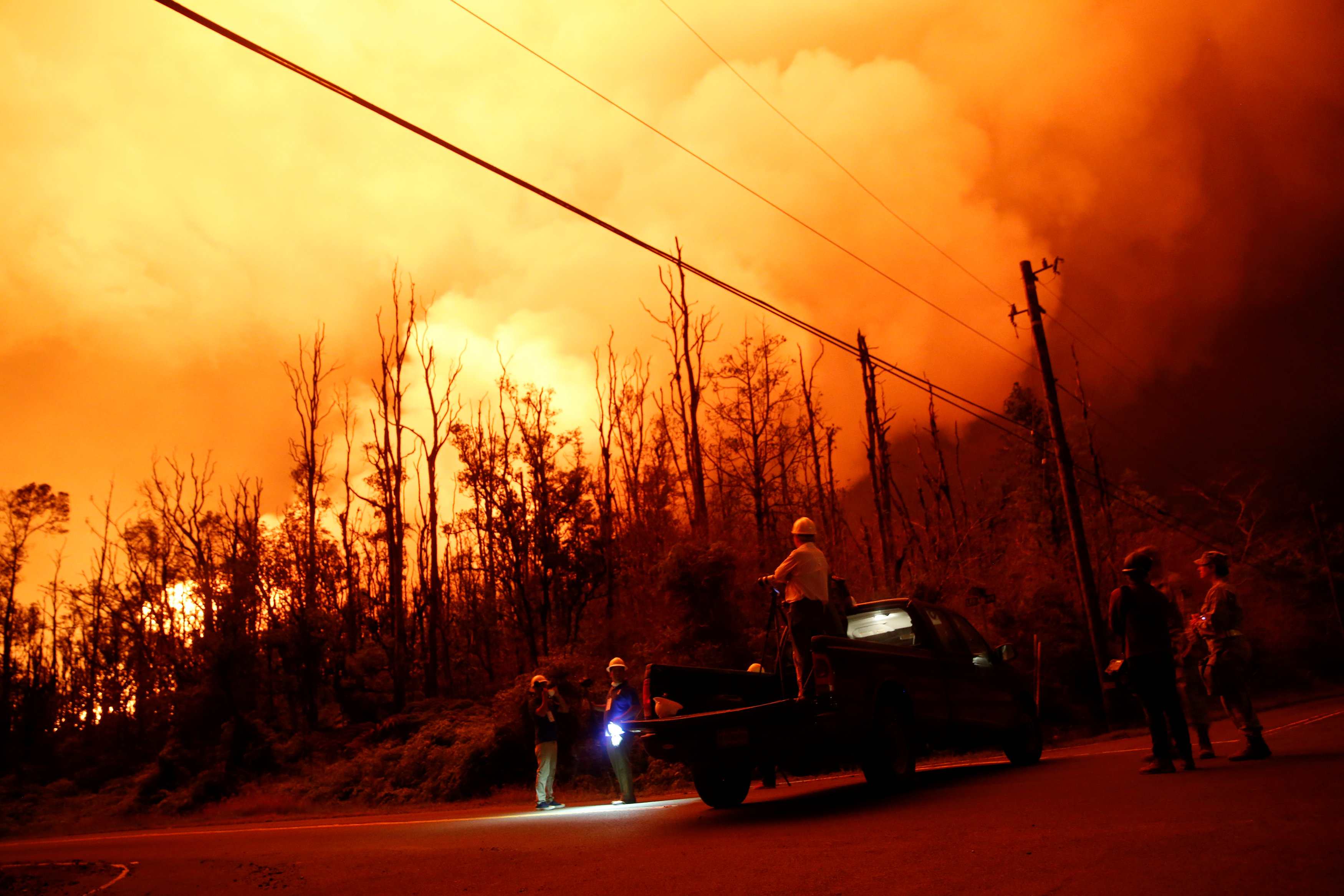 (Reuters) – Another small explosion at the summit of Hawaii’s Kilauea Volcano shot more ash high into the atmosphere, putting communities in the southern part of the Big Island at risk, the U.S. Geological Survey (USGS) said.

On Sunday, another explosion spewed ash from the volcano, creating a driving hazard for roads on parts of the Big Island.

A fissure in the volcano spewed molten rock 160 feet (49 meters) on Tuesday, slightly lower than the 180 feet (55 meters) it reached from Saturday night into Sunday, pushing a steady flow of lava into the ocean, the USGS said.

A representative for the Hawaii Emergency Management Agency did not immediately respond to a request for comment.

The eruption, which entered its 40th day on Tuesday, stands as the most destructive in the United States since at least the violent 1980 eruption of Mount St. Helens in Washington state that reduced hundreds of square miles to wasteland and killed nearly 60 people, according to geologist Scott Rowland, a volcanologist at the University of Hawaii at Manoa.

The Hawaii eruption has caused no casualties, but lava flows have swallowed about 600 homes since May 3, Hawaii County Mayor Harry Kim said last week.

Vacationland, a private development believed to comprise about 160 homes, was completely erased, and at least 330 houses were devoured by lava at Kapoho Beach Lots, Kim said.

On Saturday, hundreds of construction workers and volunteers, including officials from the Hawaii National Guard and the Hawaii Regional Council of Carpenters, began building 20 temporary housing units in Pahoa for families forced from their homes.