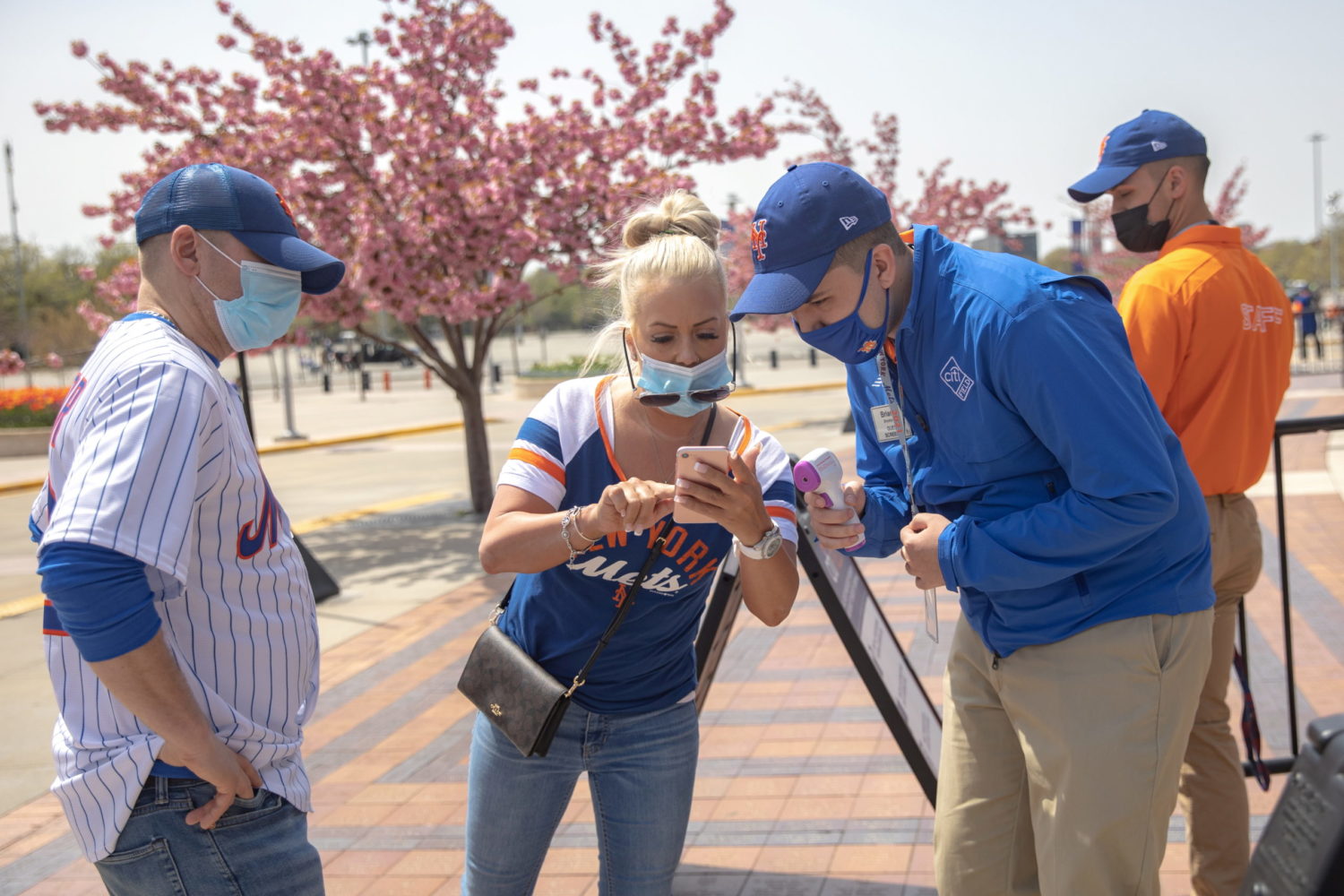 (Reuters) – Over 60 U.S. stadiums and other venues are deploying an app from Clear to verify people’s COVID-19 status, placing the New York company known for its airport security fast lanes at the forefront of a national debate over “vaccine passports.”

Major League Baseball’s San Francisco Giants and New York Mets are among the first big businesses to demand guests prove they tested negative for the virus or are immunized against it. While the teams welcome paper proof, they encourage downloading records onto Clear’s Health Pass feature for convenience.

As with mask mandates, such requirements are under attack from Republican politicians and anti-surveillance activists, as un-American intrusions on civil liberties. They fear businesses will discriminate against the unvaccinated and unnecessarily amass personal data.

Republican governors including in Florida and Texas last month moved to bar some establishments from asking about immunization status, though legal experts say door-checks are lawful to protect public health.

As a business based on replacing physical IDs, tickets and credit cards with facial or fingerprint recognition, Clear has a huge opportunity in emerging health-check rules that would familiarize more people with its technology.

“Those experiences where you have to prove something about you – if we can help empower the consumer to get through that more quickly – that is our core business,” said Catesby Perrin, Clear’s executive vice president of growth.

So far, Clear is among coronavirus health app frontrunners, with partners including United Airlines for its Los Angeles-to-Honolulu flights and the Venetian resort in Las Vegas for conventions it hosts.

With fans anxious to get back to live sports, the Giants said its promotion generated about 6,000 Clear downloads in April. Nationwide, over 70,000 Health Passes are used for venue admission weekly, Clear said, though the app is only starting to verify vaccination status.

Also gaining traction is Excelsior Pass, funded by New York state, which supports verification of tests and vaccinations within the state. The app generated 500,000 certificates in April, and a companion app for businesses to verify them had 40,000 installations, New York spokeswoman Jennifer Givner said.

In Europe, several governments have introduced apps that may be required to access transport, gyms and restaurants, while the 27-nation European Union races to develop a “gateway” that will enable them to work across borders.

Airline-backed Travel Pass and the nonprofit CommonPass, which was installed an estimated 20,000 times over the last two months in the United States, are being tested for international flight checks.

It remains unclear whether high-tech options to prove health status will be widely required. At their best, apps would combat fake records by validating information against public health databases, but that is no small task.

Piscini said it requires accessing at least 64 separate databases in the United States. But California, for example, has yet to specify whether and when it will share records with apps.

Clear has started testing access to vaccination records but declined to disclose details.

New online tools that have gained a few thousand users, including VaxYes and ConfirmD, are attesting to the veracity of vaccine certificate uploads by having medical professionals weed out forgeries.

“The demand (to automate) is there. There’s just a myriad different hoops to get through,” said Mohammad Gaber, chief executive of VaxYes developer GoGet.

Clear users upload a driver’s license or other identity document and take a selfie, which the system checks to make sure they match before connecting to COVID-19 test results from hundreds of labs or the proof of vaccination.

Some venues also require a symptom survey on Clear or an automated temperature check at a Clear kiosk.

Users get a “green” pass with their headshot and a QR code to show staff or scan at entrances. Venues pay for the system.

Texas music festival Electric Cookout adopted Health Pass to reduce chances of an outbreak, said co-founder Pooja Shah. About 50 out of 1,200 attendees used it at an April event and received access to special areas, she said.

Combining subscribers and non-paying users, Clear, whose services also go by Alclear and Secure Identity, said it has about 5.7 million members.

The company will not disclose financial results, but announced in February a $100 million funding round with investors including growth firm General Atlantic and the National Football League’s 32 Equity fund.

Clear still has hurdles to become accepted and get people comfortable with using it.

The Seattle Mariners baseball team promoted Clear’s technology for ID-less beer purchases from 2018 through 2019. The team said the effort did not generate “meaningful” usage data.

Clear said it was pleased with results and continues to educate regulators.

The Giants aim to enable card-less concession sales this year, and its chief business development officer, Jason Pearl, is enthusiastic about Clear’s technology. “I don’t think anyone else comes close.”