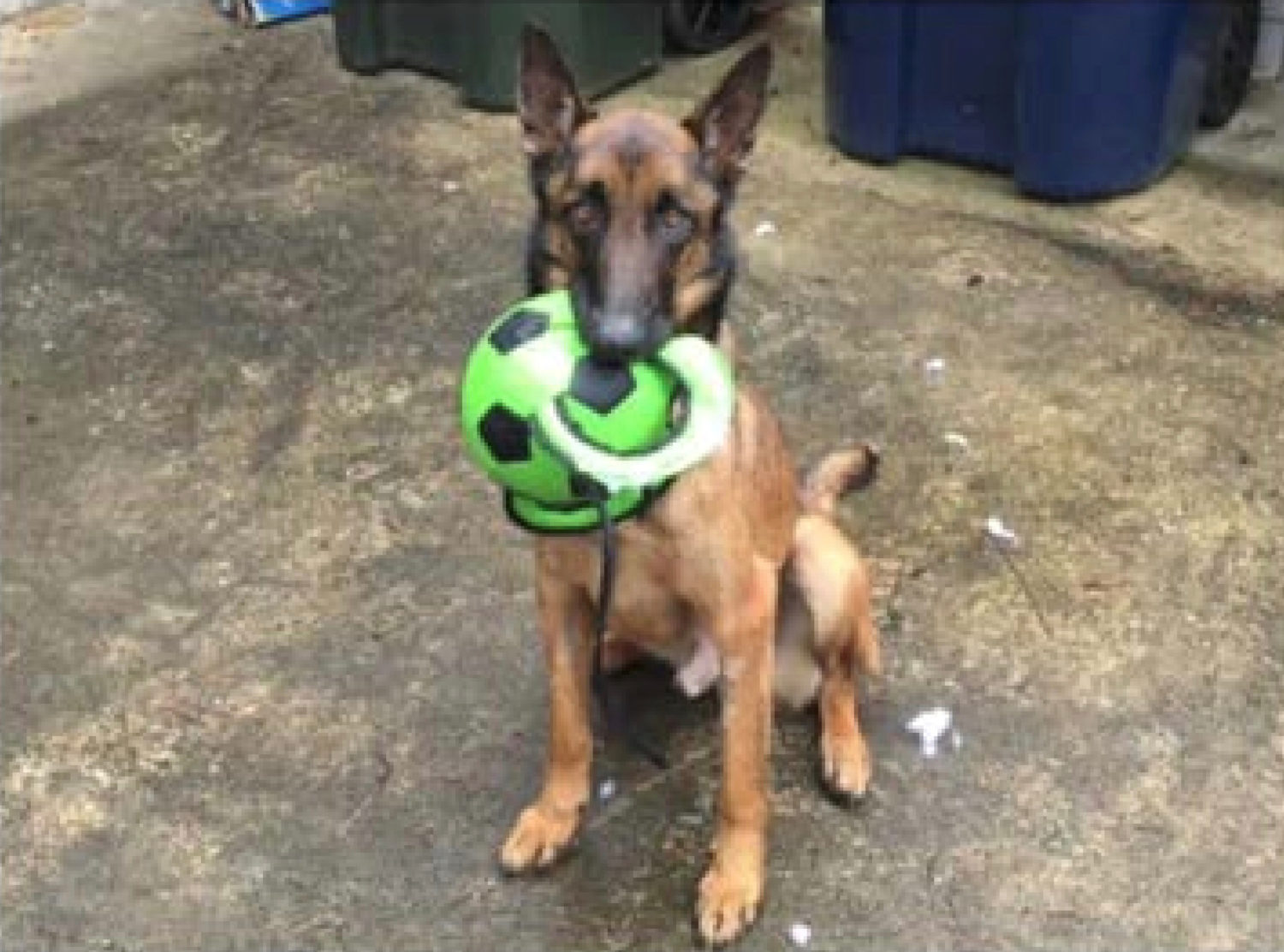 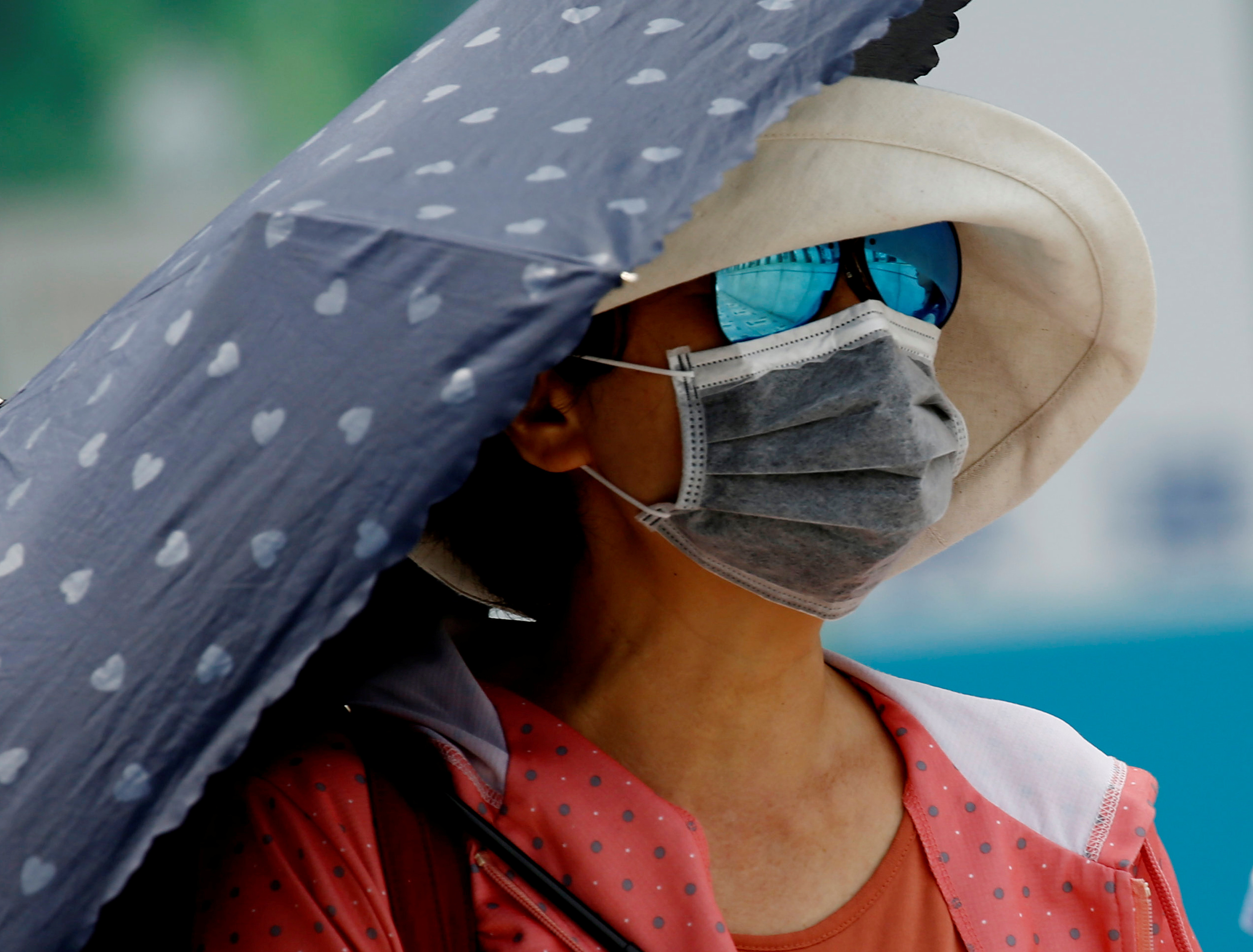 TOKYO (Reuters) – Vegetable prices in Japan are spiking as much as 65 percent in the grip of a grueling heat wave, which drove temperatures on Wednesday to records in some areas hit by flooding and landslides, hampering clean-up and recovery efforts.

As many as 65 people died in the week to July 22, up from 12 the previous week, government figures show, while a prisoner in his forties died of a heat stroke in central Miyoshi city, amid what medical experts called an “unprecedented” heat wave.

An agriculture ministry official in Tokyo, the capital, warned against “pretty severe price moves” for vegetables if predictions of more weeks of hot weather held up, resulting in less rain than usual.

“It’s up to the weather how prices will move from here,” the official said. “But the Japan Meteorological Agency has predicted it will remain hot for a few more weeks, and that we will have less rain than the average.”

The most recent data showed the wholesale price of cabbage was 129 yen ($1.16) per kg in Tokyo on Monday, the ministry said, for example, an increase of 65 percent over the average late-July price of the past five years.

In Takahashi, another western city and one of the areas hit hardest by this month’s flooding, the mercury reached 38.7 C (101.7 F), just 0.3 degrees off an all-time high.

In Miyoshi, where the prisoner died after a heat stroke, the temperature on the floor of his cell was 34 degrees C (93 F) shortly before 7 a.m. on Tuesday. The room had no air-conditioning, like most in the prison.

Authorities who found him unresponsive in his cell sent him to a hospital outside the prison, but he was soon pronounced dead, a prison official said.

“It is truly regrettable that an inmate lost his life,” Kiyoshi Kageyama, head of the prison, said in a statement. “We will do our utmost in maintaining (prisoners’) health, including taking anti-heat stroke steps.”

On the Tokyo stock market, shares in companies expected to benefit from a hot summer, such as ice-cream makers, have risen in recent trade.

Shares in Imuraya Group, whose subsidiary sells popular vanilla and red-bean ice cream, were up nearly 10 percent on the month, while Ishigaki Foods, which sells barley tea, surged 50 percent over the same period. 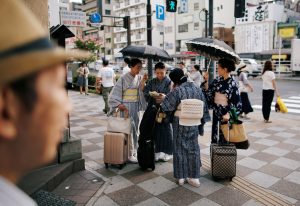 In neighboring South Korea, the unremitting heat has killed at least 14 people this year, the Korea Centers for Diseases Control and Prevention said.

The heat wave was at the level of a “special disaster”, South Korean President Moon Jae-in said on Tuesday, as electricity use surged and vegetable prices rose.

(Reporting by Kiyoshi Takenaka in Tokyo and Jeongmin Kim in SEOUL; Additional reporting by Ritsuko Ando and Aaron Sheldrick in TOKYO; Editing by Clarence Fernandez) 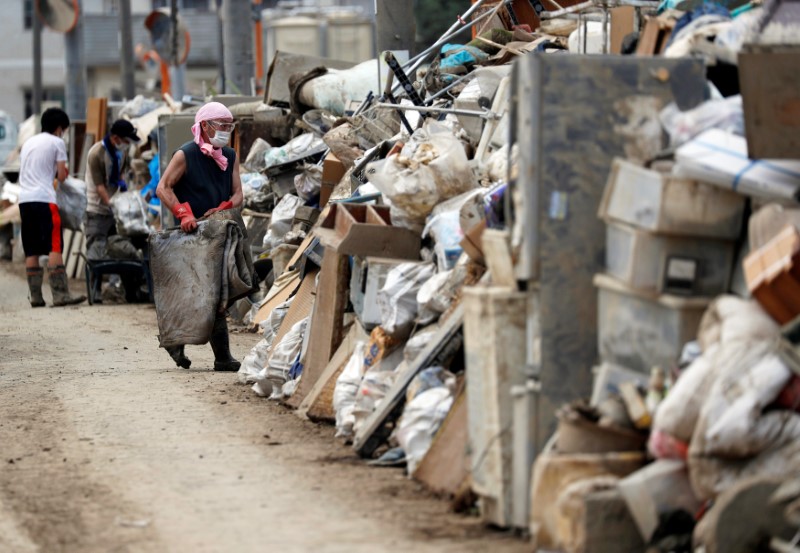 By Kiyoshi Takenaka and Mari Saito

KURASHIKI, Japan (Reuters) – Municipal workers in western Japan struggled on Friday to restore water supplies a week after floods caused by a record downpour killed more than 200 people in the worst such disaster in 36 years.

“We need the water supply back,” said Hiroshi Oka, 40, a resident helping to clean up the Mabi district in one of the hardest-hit areas, the city of Kurashiki, where more than 200,000 households have gone without water for a week.

“What we are getting is a thin stream of water, and we can’t flush toilets or wash our hands,” he added, standing over a 20-liter (4.4-gallon) plastic tank that was only partly filled after almost four hours of waiting.

Water has been restored to some parts of the district, a city official told Reuters, but he did not know when normal operations would resume, as engineers were trying to locate pipeline ruptures.

More than 70,000 military, police and firefighters have fanned out to tackle the aftermath of the floods. There have been 204 deaths, the government said, with dozens missing.

Large piles of tatami straw mats, chairs and bookcases could be seen all over Mabi. The smell of leaked gasoline, mixed with a sour smell of mud and debris, filled the air.

The weather has fueled concerns that residents, many still in temporary evacuation centers, may suffer heat stroke or illness as hygiene levels deteriorate.

Shizuo Yoshimoto, a doctor making the rounds at evacuation centers, said an urgent challenge was to bring necessary drugs to patients with diabetes and high blood pressure who were forced from their homes or whose clinics are closed.

“There are quite a few cases where patients are unable to get a hold of drugs,” he said. “So one issue is how to maintain treatment for those with chronic illness. Another is acute illness, as heatstroke is on the rise.” 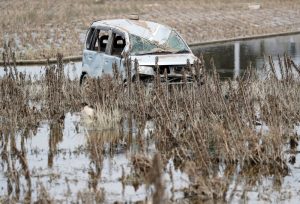 A submerged car is seen in a flooded area in Mabi town in Kurashiki, Okayama Prefecture, July 13, 2018. REUTERS/Issei Kato

Public broadcaster NHK has spread advice on coping with high temperatures and maintain hygiene, such as a video tutorial on how to make a diaper from a towel and plastic shopping bag.

More than 70,000 military, police and firefighters have fanned out to help with the rescue operation.

“People still need to be aware of the possibility of further landslides,” he told reporters.

Prime Minister Shinzo Abe, who canceled a scheduled overseas trip to deal with the rescue effort, visited Kurashiki on Thursday, and said he aimed to visit other flood-damaged areas on Friday and over the weekend. 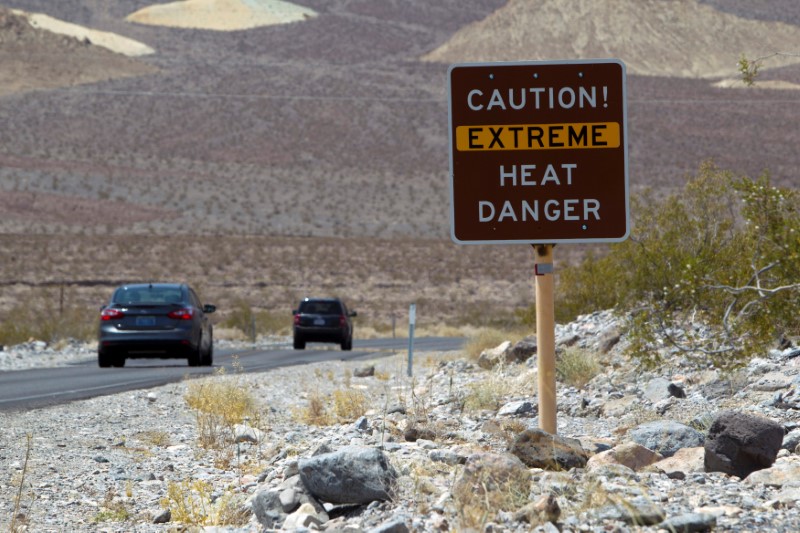 LOS ANGELES (Reuters) – Four people, including a homeless person and two hikers, have died from the record-breaking heat in the U.S. Southwest, media reports said, where triple-digit temperatures have driven residents indoors and canceled airline flights.

The victims were identified only as a 72-year-old man and an 87-year-old woman.

“It is tragic when someone dies of hyperthermia since in most every case it could have been prevented,” Dr. Michelle Jorden of the Santa Clara County Coroner’s Office told the newspaper.

“Hyperthermia and heat stress happen when a body’s heat-regulation system cannot handle the heat. It can happen to anyone, which is why it is so important to be in a cool location, drink plenty of water and take a cool bath or shower if you are getting too hot,” Jorden said.

The extreme heat, brought on by a high-pressure system parked over the Four Corners region where Colorado, Utah, New Mexico, and Arizona meet, has boosted temperatures well above normal across much of the Southwest.

The bodies of a 57-year-old father and his 21-year-old son from Corpus Christi, Texas, were found earlier this week in the Carlsbad Caverns National Park in New Mexico, where they were hiking, media reported.

New Mexico State Police told an NBC affiliate in New Mexico that the scorching temperatures, which were over 100 degrees Fahrenheit (37.8 degrees Celsius), contributed to the deaths of the men.

The National Weather Service and local authorities issued heat advisories and warnings, urging residents to stay indoors and to drink plenty of water if they were outdoors. Power grid operators encouraged customers to use electricity sparingly to avoid a shutdown or blackout.

The heat can also create issues for ground crews, where pavement temperatures can reach more than 150 degrees F (66 C), a life-threatening condition if workers are exposed to it too long.

Temperatures reached 127 F (52.8 C) in California’s Death Valley at the peak of the heat wave on Tuesday afternoon but cooler weather was expected across the region by the end of the week.