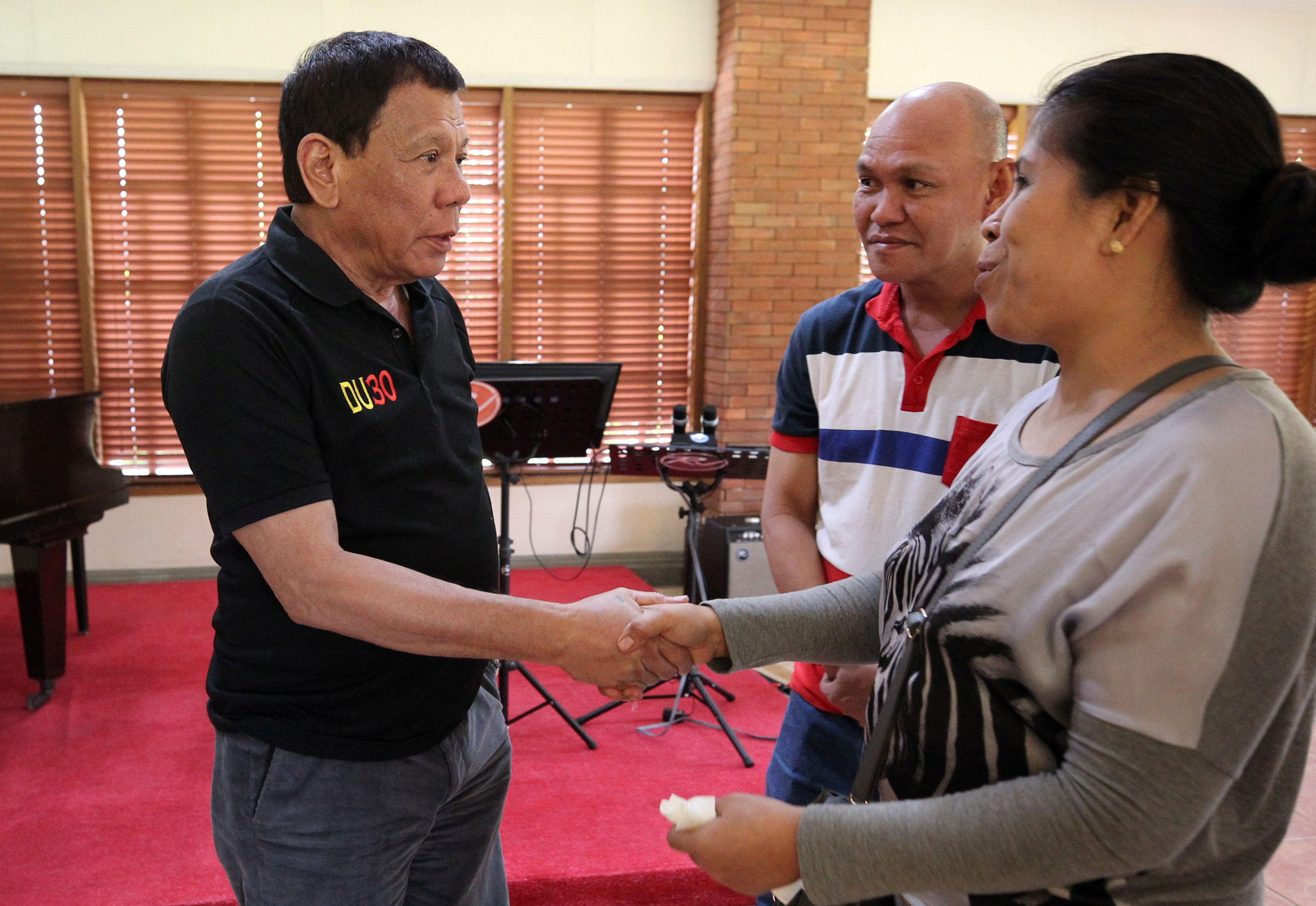 MANILA (Reuters) – Philippine President Rodrigo Duterte told police on Monday they could kill “idiots” who violently resist arrest, two days after hundreds of people turned the funeral of a slain teenager into a protest against his deadly war on drugs.

Duterte met the parents of the schoolboy, 17-year-old Kian Loyd delos Santos, at the presidential palace in Manila on Monday, to assure them their son’s case would be handled fairly.

Delos Santos’ mother, Lorenza, said she was confident the president would help quickly resolve the case, while the father, Saldy, said he no longer feared for their lives and felt reassured by the meeting.

“He promised he would not allow those who have committed wrong to go unpunished,” the mother said in an interview posted online by Duterte’s communications office on a Facebook page after the meeting.

Duterte unleashed the anti-drugs war after taking office in June last year following an election campaign in which he vowed to use deadly force to wipe out crime and drugs.

Thousands of people have been killed and the violence has been criticized by much of the international community.

Domestic opposition has been largely muted but the killing of delos Santos by anti-drugs officers on Aug. 16 has sparked rare public outrage. 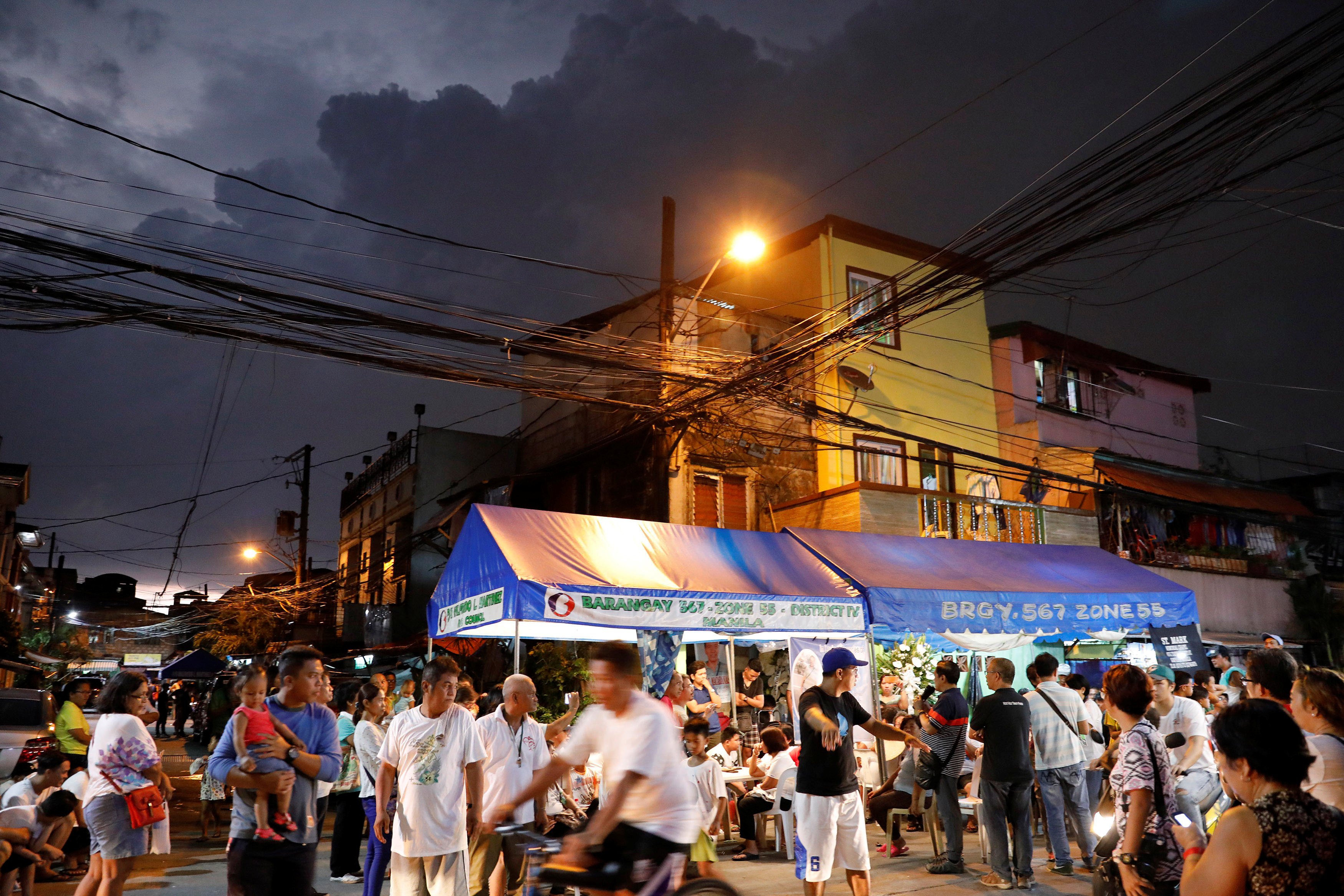 Residents stay at a wake of a victim of a shooting by masked motorcycle-riding men during a local community protest march against extrajudicial killings in Sampaloc, metro Manila, Philippines August 28, 2017. REUTERS/Dondi Tawatao

More than 1,000 people, including nuns, priests and hundreds of children, joined his funeral procession on Saturday, turning the march into one of the biggest protests yet against Duterte’s anti-drugs campaign.

Earlier, Duterte broke off midway through a prepared speech at the Hero’s Cemetery on the outskirts of Manila and addressed impromptu comments to Jovie Espenido, the police chief of a town in the south where the mayor was killed in an anti-drugs raid.

“Your duty requires you to overcome the resistance of the person you are arresting … (if) he resists, and it is a violent one … you are free to kill the idiots, that is my order to you,” Duterte told the police officer.

Duterte added that “murder and homicide and unlawful killings” were not allowed and that police had to uphold the rule of law while carrying out their duties.

Delos Santos was dragged by plain-clothes policemen to a dark, trash-filled alley in Manila before he was shot in the head and left next to a pigsty, according to witnesses whose accounts appeared to be backed up by CCTV footage.

Police say they acted in self defense after delos Santos opened fire on them, and Duterte’s spokesman and the justice minister have described the killing of the teenager as an “isolated” case.

U.N. special rapporteur on extrajudicial killings, Agnes Callamard, described the killing of delos Santos as “murder” in a tweet on Aug. 25, earning the ire of Duterte who in a separate speech on Monday called her “son of a bitch” and “stupid”.

“She should not threaten me,” Duterte said as he challenged Callamard to visit and see the situation in the Philippines.

A planned visit by Callamard in December was canceled because she refused to accept Duterte’s conditions that she must hold a debate with him. She turned up in unofficial capacity in May to address an academic conference on human rights.