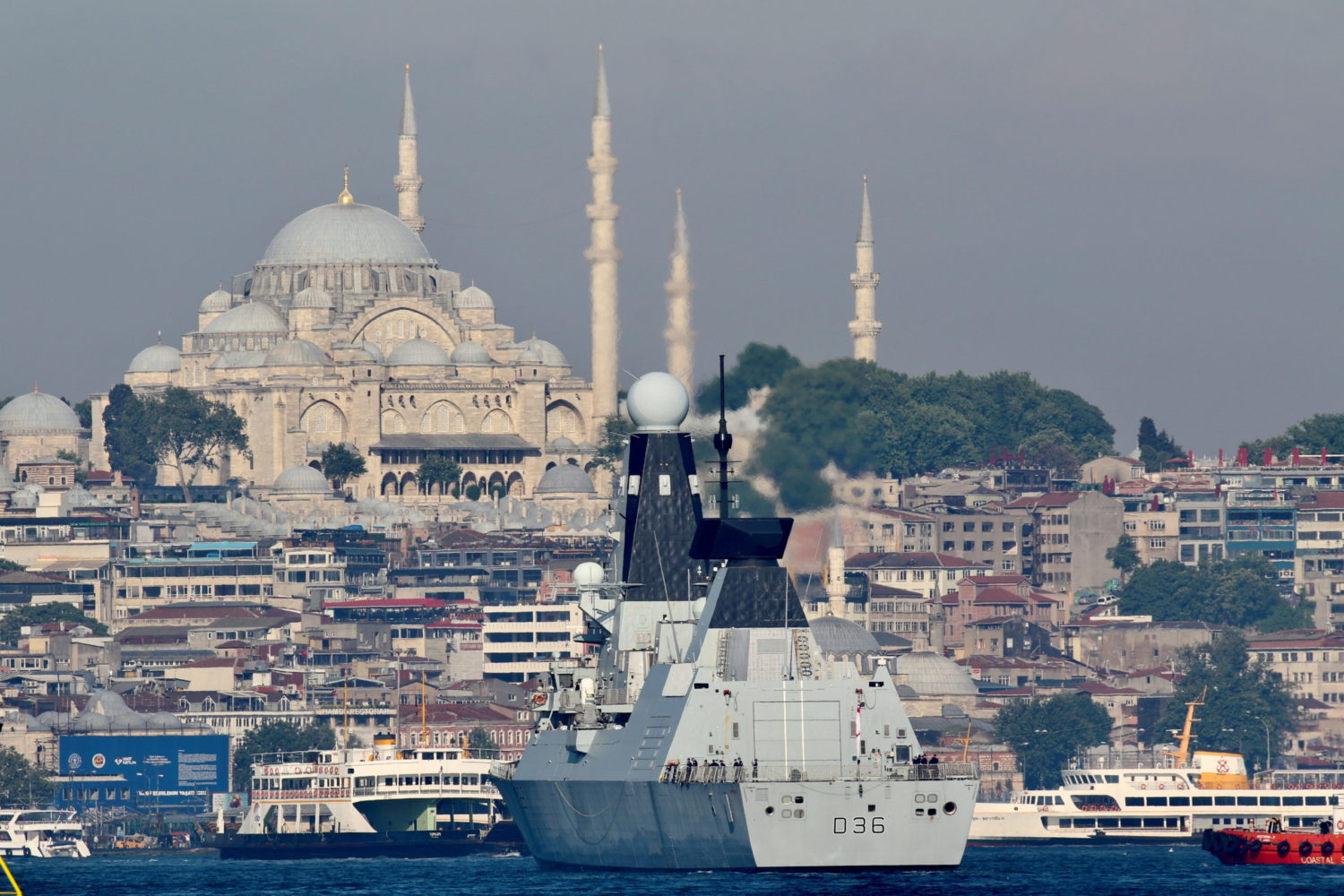 By Maria Kiselyova and Andrew MacAskill

MOSCOW/LONDON (Reuters) -Russia said on Wednesday it had fired warning shots and dropped bombs in the path of a British warship to chase it out of waters Moscow claims in the Black Sea off the coast of the Crimea peninsula.

Britain rejected Russia’s account of the incident, saying it believed any shots fired were a pre-announced Russian “gunnery exercise,” and that no bombs had been dropped. But it confirmed that its destroyer, HMS Defender, had sailed through what it described as waters belonging to Ukraine.

The ship was “conducting an innocent passage through Ukrainian territorial waters in accordance with international law,” Britain’s Ministry of Defense said in a statement.

Prime Minister Boris Johnson’s spokesman said: “It’s incorrect to say either that it was fired upon or that the ship was in Russian waters.”

Military experts said that whether or not the details of the Russian or British accounts were accurate, the incident appeared to represent an escalation in confrontation between the West and Russia over disputed sea lanes.

Russia’s foreign ministry called the passage of the British warship through the area an act of “blatant provocation” and said it would summon the British ambassador over the incident.

Russia seized and annexed the Crimea peninsula from Ukraine in 2014 and considers areas around the peninsula’s coast to be Russian waters. Western countries deem the Crimea part of Ukraine and reject Russia’s claim to the seas around it.

“Innocent passage” is an internationally recognized right for ships to sail through territorial waters of a country provided they mean no harm.

“This was done to test Russian resolve over Crimea,” Mark Gray, a maritime security specialist and a retired colonel with Britain’s Royal Marines, told Reuters.

“Russia is trying to create facts on the ground and get them respected internationally, so that their annexation is in effect rubber-stamped by the world,” he said, comparing Moscow’s Black Sea claims to those of Beijing in the South China Sea, also rejected by the West.

“Nonetheless, the Russian response is extraordinarily robust, a tad undiplomatic and way over the top.”

Ukrainian Foreign Minister Dmytro Kuleba said the incident showed that Russia’s “aggressive and provocative policies” in the Black Sea and nearby Azov Sea constituted a “continuous threat to Ukraine and its allies.” In a tweet, Kuleba called for more cooperation between NATO and Ukraine in the Black Sea.

Western countries are conducting naval exercises this week in the Black Sea known as Sea Breeze. Hours before the incident, Russia’s embassy in Washington had called on the United States and allies to cancel them.

The British destroyer visited the Ukrainian port of Odessa this week, where an agreement was signed for Britain to help upgrade Ukraine’s navy.

The Russian ministry said the British ship had ventured as far as 3 kilometers (2 miles) into Russian waters near Cape Fiolent, a landmark on Crimea’s southern coast near the port of Sevastopol, headquarters of the Russian Navy’s Black Sea fleet.

“The destroyer had been warned that weapons would be used if it trespasses the border of the Russian Federation. It did not react to the warning,” the ministry said.