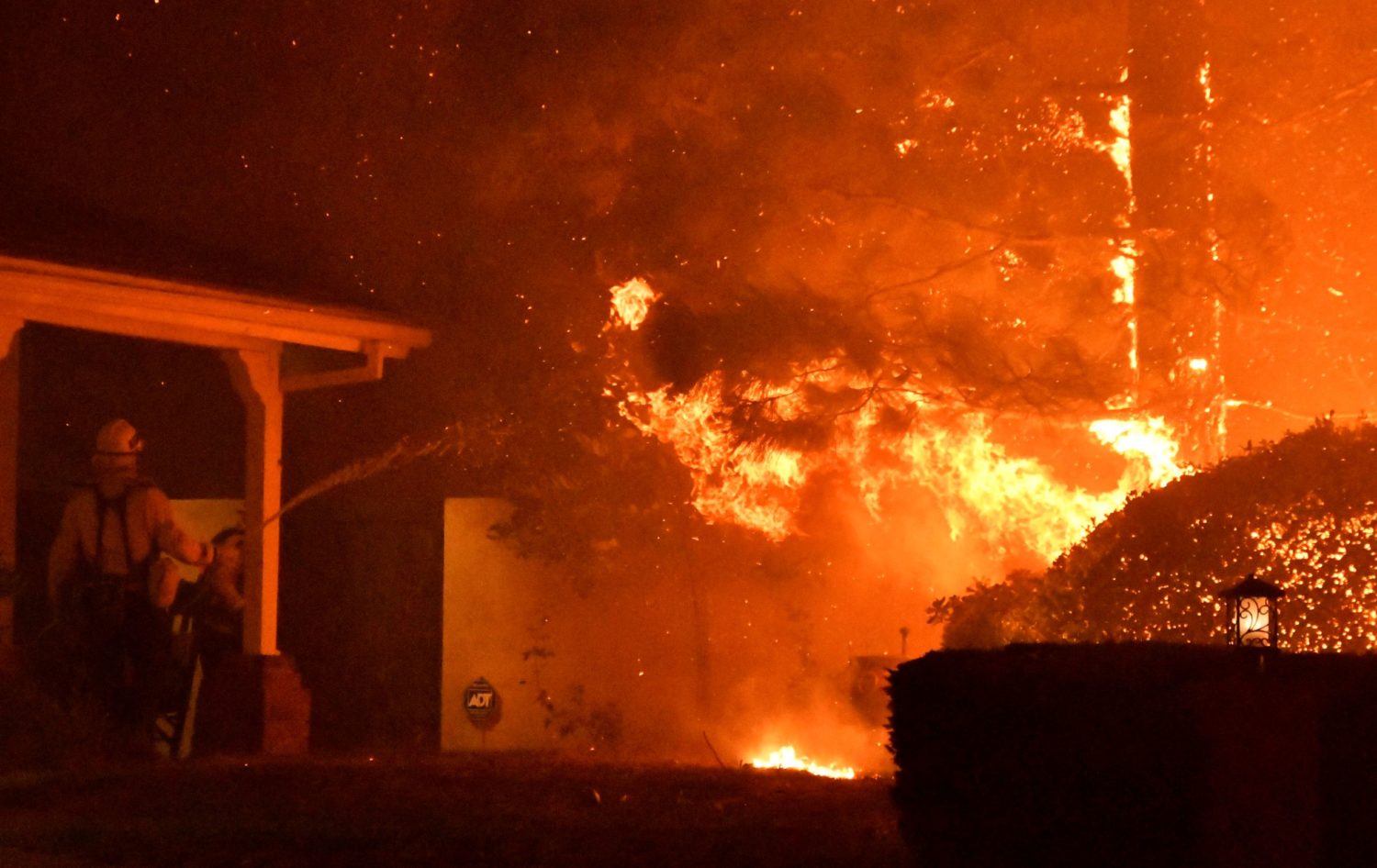 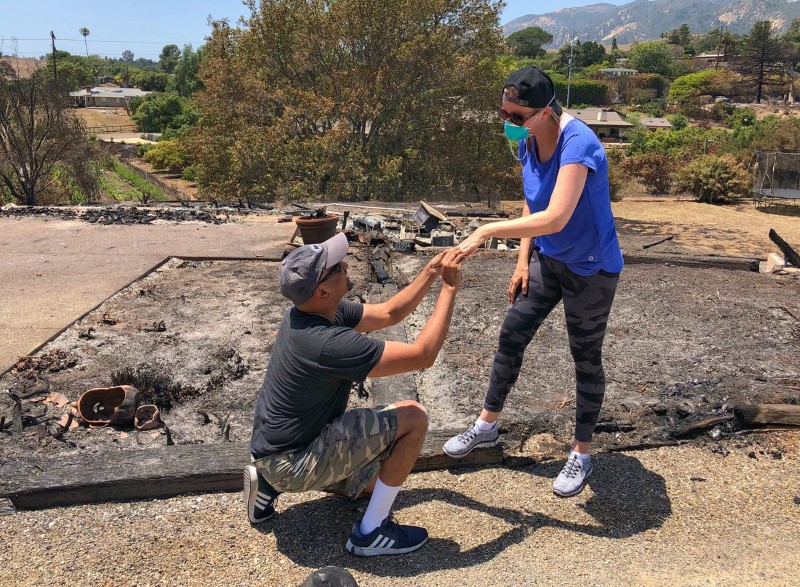 (Reuters) – As wildfires destroyed dozens of homes and forced the evacuation of thousands of residents in California, at least one couple had a bit of good news.

She had taken them off before going to sleep Friday and had no time to retrieve them when the couple escaped the fast-moving blaze Holiday Fire with Ishu’s two daughters, their three dogs and a cat, said Mike Eliason, a spokesman with the Santa Barbara County Fire Department.

The married couple of eight months were escorted back to their property Sunday to hunt for the rings. 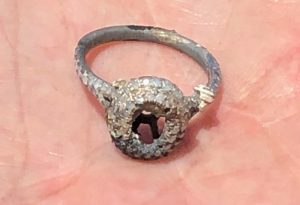 A wedding ring belonging to Ishu and Laura Rao, is retrieved from the rubble of their home which they lost in a wildfire, in Alameda, California, U.S., in this July 8, 2018 photo obtained from social media. MANDATORY CREDIT. Mike Eliason/Santa Barbara County Fire Department/via REUTERS

“Wouldn’t have believe it, but they found them,” Eliason said. They were damaged and charred, but still recognizable.

Ishu Rao then dropped to one knee, put the rings on her finger and proposed all over again. The rings still fit, Eliason said, “And she said yes.”

Elsewhere, some firefighters were gaining ground in containing the wildfires in California early Monday. Others just held the lines against the blazes feeding off the dry brush in the California heat, officials said.

Firefighters should get some more good news this week with cooler temperatures, the National Weather Service said. Scorching heat, high winds and low humidity have fanned dozens of fires across the western United States this summer.

The fires had burned more than 2.9 million acres (1.17 million hectares) through Friday, already more than the annual average of about 2.4 million acres over the past 10 years, according to the National Interagency Fire Center.

The Klamathon Fire, which has destroyed 81 structures and blackened about 35,000 acres, was 25 percent contained on Sunday evening, according to Cal Fire. More than 1,500 people have been affected by the flames.

Elsewhere in Northern California, the County Fire has charred more than 90,200 acres in sparsely populated wooded areas of Napa and Yolo Counties. 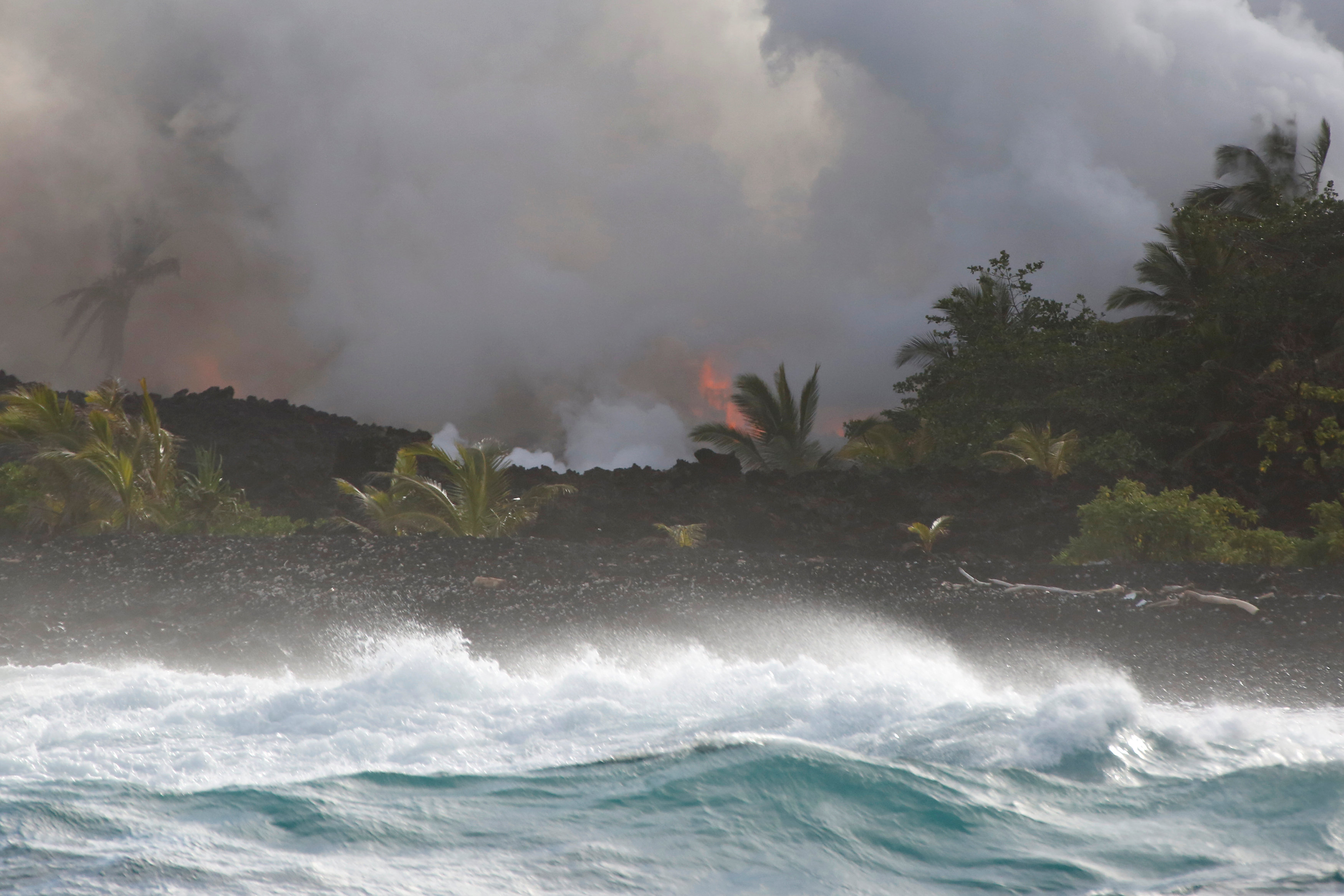 PAHOA, Hawaii (Reuters) – A river of lava spewing from the foot of Hawaii’s Kilauea Volcano swallowed about three dozen more homes on the Big Island during a weekend of destruction that brought to nearly 120 the number of dwellings devoured since last month, officials said on Monday.

Mounting property losses were reported a day after five or six people who initially chose to stay in the newly evacuated Kapoho area after road access was cut off were rescued by helicopter, according to the Hawaii County Civil Defense agency.

All but a few of the estimated 500 inhabitants of Kapoho and adjacent Vacationland development are now believed to have fled their homes, an agency spokesman said. The area lies near the site of a seaside village buried in lava from a 1960 eruption.

The latest damage came from a large lava flow that crept several miles (km) before severing a key highway junction at Kapoho on Saturday and then obliterating about a half dozen blocks of the subdivision over the weekend, the spokesman said. 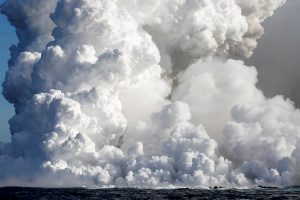 One finger of the lava poured into a small freshwater lake, boiling away all its water late on Saturday, while another finger spilled into Kapoho Bay on Sunday night, officials said.

On Monday, civil defense reported a total of 117 homes and other structures destroyed across the island’s larger lava-stricken region, as the eruption from Kilauea, one of the world’s most active volcanoes, continued through its 33rd day.

About three dozen of those structures, mostly private homes and vacation rentals, were lost during the weekend in Kapoho. The rest were consumed weeks earlier in the larger Leilani Estates subdivision several miles (km) to the west, where lava-spouting fissures in the ground first opened on May 3.

About 2,000 residents have been displaced from Leilani since earlier this month as fountains of lava and high concentrations of toxic sulfur dioxide gas continued unabated. A mandatory evacuation of much the subdivision was imposed last week.

Plumes of volcanic ash belched into the air by periodic daily explosions from the crater at Kilauea’s summit have posed an additional nuisance and a health concern to nearby communities.

So too have airborne volcanic glass fibers, called “Pele’s hair,” wispy strands carried aloft by the wind from lava fountains and named for the volcano goddess of Hawaiian myth.

Seaside residents and boaters also have been warned to avoid noxious clouds of laze — a term combining the words “lava” and “haze” — formed when lava reacts with seawater to form a mix of acid fumes, steam and glass-like specks.

Lava flows have knocked out telephone and power lines, causing widespread communication outages, and forced the shutdown of a geothermal energy plant that normally provides about a quarter of the island’s electricity.

At the same time, most of the Hawaii Volcanoes National Park, one of the island’s biggest tourist attractions, remains closed indefinitely due to hazards from ash and volcanic rock ejected from the summit crater, and accompanying earthquakes that have damaged park facilities.

Kilauea’s current upheaval comes on the heels of an eruption cycle that began in 1983 and had continued nearly nonstop for 35 years, destroying more than 200 homes. Scientists say they are unsure whether the latest activity is part of the same eruption phase or a new one, and how long it may last.