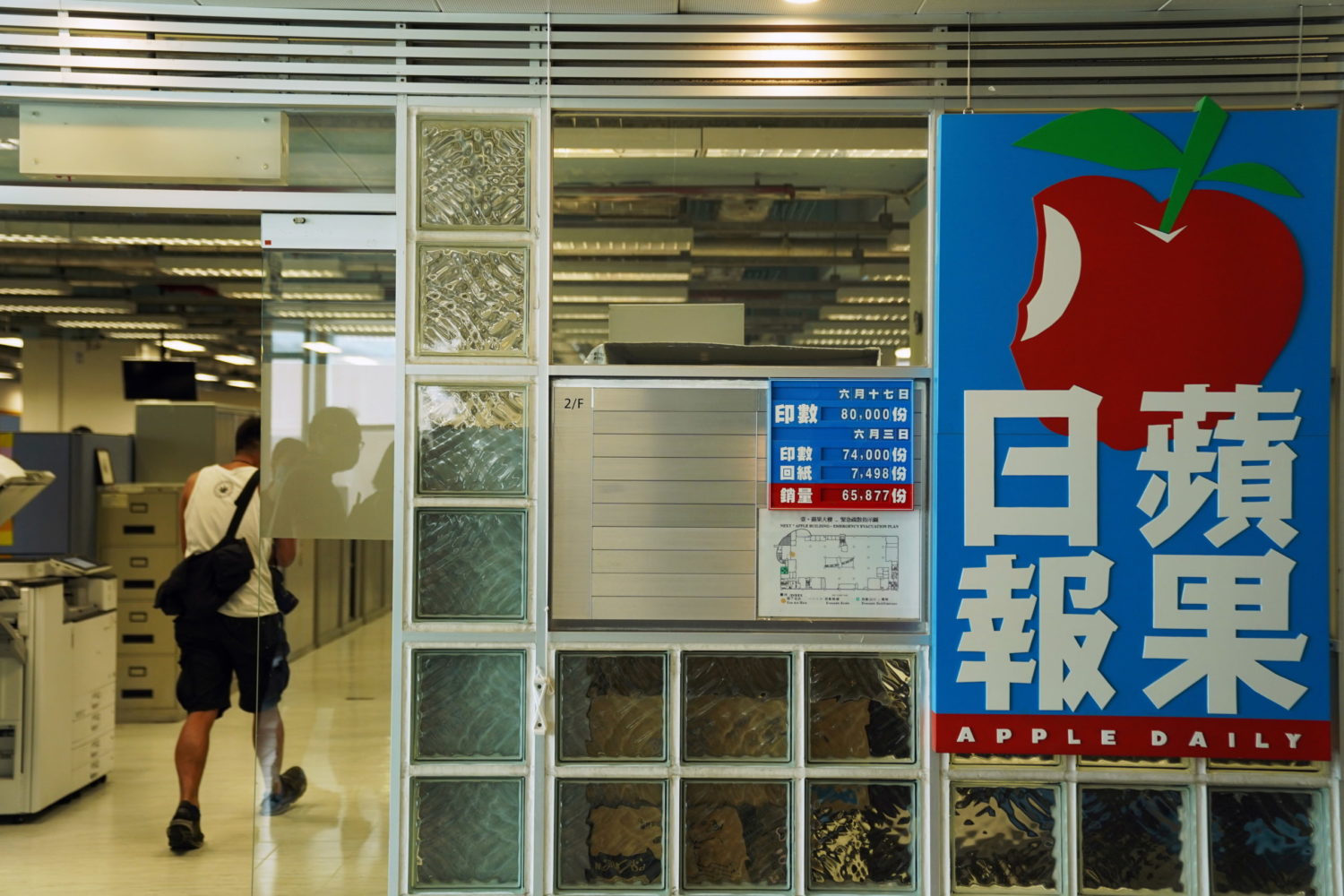 By Guy Faulconbridge and Robin Emmott

LONDON/BRUSSELS (Reuters) – The European Union and Britain on Thursday said a police raid on Hong Kong’s pro-democracy tabloid Apple Daily showed that China was using a new national security law to crack down on dissent and silence the media rather than deal with public security.

Just days after the world’s richest democracies scolded China over human rights at a Group of Seven summit and the NATO military alliance warned Beijing over its ambitions, Hong Kong police made dawn arrests of Apple Daily newspaper executives.

Five hundred Hong Kong police officers sifted through reporters’ computers and notebooks at the daily, the first case in which authorities have cited media articles as potentially violating the national security law.

The raid “further demonstrates how the national security law is being used to stifle media freedom and freedom of expression in Hong Kong,” EU spokesperson Nabila Massrali said in a statement.

“It is essential that all the existing rights and freedoms of Hong Kong residents are fully protected, including freedom of the press and of publication.”

“Freedom of the press is one of the rights China promised to protect in the Joint Declaration and should be respected,” Raab said, referring to an accord guaranteeing autonomy for Hong Kong when London handed over its colony to China in 1997.

Hong Kong Security Secretary John Lee described the newsroom as a “crime scene” and said the operation was aimed at those who use reporting as a “tool to endanger” national security.

Western leaders say Chinese President Xi Jinping, 68, is cracking down on Hong Kong, which Britain handed back to China in 1997, and Western security officials have expressed apprehension about Xi’s next target.

Britain and its allies say the national security law breaches the “one country, two systems” principle enshrined in the 1984 Sino-British treaty that guaranteed Hong Kong’s autonomy.

China has repeatedly warned Britain and the United States to stop meddling in its affairs and says many Western powers are gripped by an “imperial hangover” after years of humiliating China during the 19th and 20th Centuries. 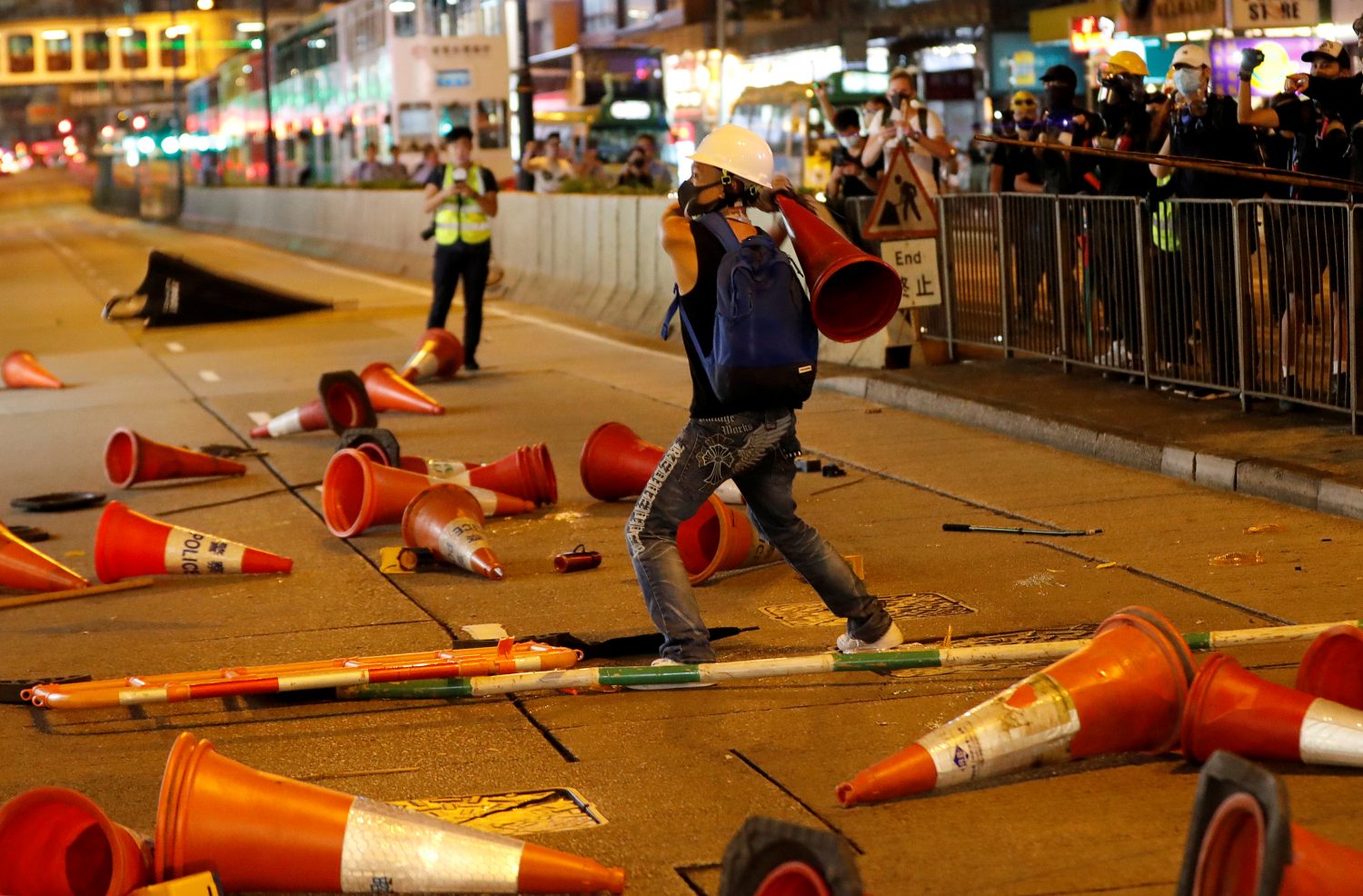 BEIJING (Reuters) – Protesters in Hong Kong must not “play with fire” and mistake Beijing’s restraint for weakness, China said on Tuesday in its sharpest rebuke yet of the “criminals” behind demonstrations in the city whom it vowed to bring to justice.

Hong Kong has suffered weeks of sometimes violent protests that began with opposition to a now-suspended extradition law, which would have allowed suspects to be tried in mainland courts.

But the protests have swelled into a broader backlash against the government of the Asian financial hub, fueled by many residents’ fear of eroding freedoms under the increasingly tight control of the Communist Party in Beijing.

“I would like to warn all of the criminals: don’t ever misjudge the situation and mistake our restraint for weakness,” the Chinese government’s Hong Kong and Macau Affairs Office said in a document issued during a briefing in Beijing.

A small group of violent radicals were at the forefront of the protests, with “some kind-hearted citizens who have been misguided and coerced to join,” according to the document attributed to two officials, Yang Guang and Xu Luying.

It said anti-China forces were the “behind-the-scenes masterminds” who had “openly and brazenly emboldened” the protesters.

“We would like to make clear to the very small group of unscrupulous and violent criminals and the dirty forces behind them: those who play with fire will perish by it,” the office said.

“At the end of the day, they will eventually be punished.”

China has been quick to label U.S. officials as “black hands” instigating unrest in Hong Kong in an attempt to contain China’s development, but it has not provided any concrete evidence.

A bipartisan group of U.S. lawmakers on Friday urged the Trump administration to suspend future sales of munitions and crowd-control equipment to Hong Kong police, which have been accused of using excessive force.

Police on Monday fired tear gas at protesters in the former British colony after a general strike hit transport and the city’s Beijing-backed leader, chief executive Carrie Lam, warned its prosperity was at risk.

The protests surpassed earlier shows of dissent in scale and intensity, seemingly stoked by Lam’s refusal once again to meet any of the protesters’ demands, including for her resignation and independent inquiries into police use of force.

The protests are the greatest political threat to Hong Kong’s government since the territory returned to Chinese rule in 1997, and one of the biggest popular challenges to Chinese leader Xi Jinping since he came to power in 2012.

China’s People’s Liberation Army (PLA) in Hong Kong has remained in barracks since the protests started in April, leaving Hong Kong’s police force to deal with the massive demonstrations.

Diplomats and foreign security analysts are watching the situation closely, but believe there’s little appetite in Beijing for the PLA to be deployed on the streets of Hong Kong.

So far, the central government and the PLA have said only that there are clear provisions in law covering the prospect of the force’s intervention in the city.

During the briefing, Yang called the PLA “a strong force that defends every inch of its sacred territory”, and said the central government would not allow any “turbulence” beyond the control of the Hong Kong government to threaten national unity or security.

“The PLA is a force of power but also a civilized power,” Yang said.

“As long as it has the strong support of the central government and the Chinese people, the Hong Kong government and police “are fully capable of punishing those criminal activities and restoring public order and stability”, he said. 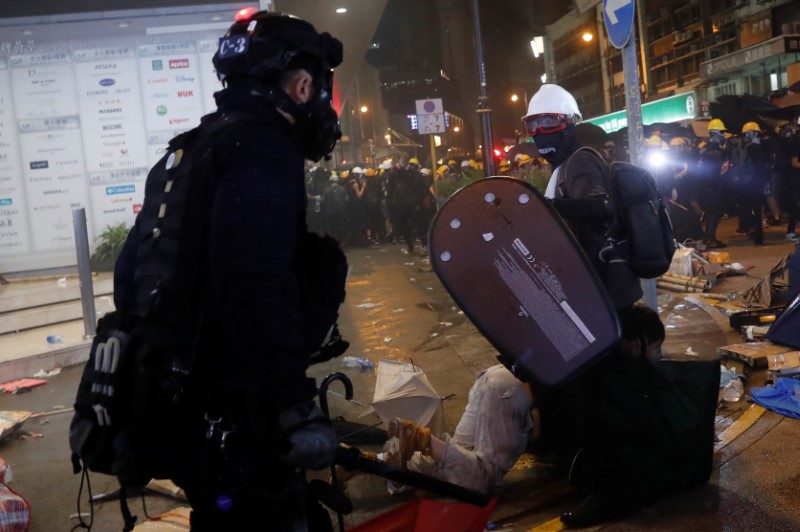 By James Pomfret and Simon Gardner

HONG KONG (Reuters) – Hong Kong police clashed with thousands of protesters on Sunday, as they sought to defend China’s main representative office from crowds seething over what many see as an increasing cycle of violence against them.

Protests over the past two months spearheaded by anti-government activists against a proposed bill that would allow people to be extradited from the city to stand trial in courts in mainland China have grown increasingly violent.

A march on Saturday against an assault the previous weekend by suspected triad gang members ended in violent turmoil as riot police waded in to disperse crowds.

On Sunday, a peaceful gathering in a park in the city’s central business district rapidly morphed into a march, as tens of thousands of black-clad protesters set off in several directions, clogging up major thoroughfares.

Thousands of people headed east, toward the shopping district of Causeway Bay, while another large contingent headed west, toward the Chinese government’s representative office, known as the Central Government Liaison Office.

There, hundreds of riot police blocked activists from advancing toward the building, which had been heavily fortified with barricades after it was surrounded and defaced a week earlier. A clear plastic shield had been erected around a national emblem above its front doors.

As the crowds surged, hundreds of riot police with shields advanced, firing rounds of tear gas, rubber bullets and sponge grenades – a crowd-control weapon – at protesters, sending clouds of acrid, burning smoke through the streets.

Some protesters were on their knees choking as ambulances raced to take away the injured.

The mostly young activists in hard hats, gas masks and body armor dug in, dismantling street signs and fences which they used to form makeshift barricades to slow police advances.

Many hit metallic surfaces with sticks to create an ominous drumbeat that echoed down the streets. 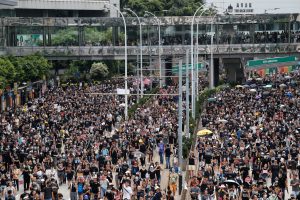 China’s Liaison Office, a potent symbol of Beijing’s rule over the city since Hong Kong returned from British to Chinese rule in 1997, has become a target for growing ranks of increasingly emboldened youngsters, angry at China’s tightening grip on the city’s freedoms.

Under a “one country, two systems” formula instituted as part of China’s sovereignty, the city was promised wide-ranging freedoms denied citizens in mainland China.

“We call this Hong Kong’s age of revolution,” said a masked protester who called himself K Lee. “This movement has been sparked by China’s refusal to respect Hong Kong’s freedoms, and the failure of authorities to listen to the people’s voice.”

After multiple weekends of unrest, the protests have continued to draw large and apparently growing ranks of protesters in increasingly violent stand-offs.

Protesters responded to police with bricks, eggs and slingshots, as well as home-made gas canisters and paintballs.

Last Sunday, protesters took police by surprise with a swoop on the Liaison Office, scrawling graffiti and throwing paint bombs at walls, the national emblem and a plaque. Chinese officials described the vandalism as an attack on China’s sovereignty that would not be tolerated.

“I have no words for Xi Jinping, he is very arrogant in his belief in communism,” said a university student who called herself Miss Ho, referring to the Chinese president. “He is taking away our freedom, and that is something we cannot bear.”

China denies interfering in Hong Kong and has warned that the violent protests over the proposed legislation allowing extraditions to mainland China were an “undisguised challenge to the formula under which it is ruled.

Many of the marchers on Sunday chanted slogans against the police. Some held banners reading: “We rise as one, we fight as one” and “Stop violence”.

The protests have brought the most serious political crisis to Hong Kong since it returned to China, and have posed an increasingly delicate national security headache for China’s Xi at a time of trade tensions with the United States and a slowing Chinese economy.

What began as a movement to oppose the extradition law has taken on broader demands. They include the resignation of Hong Kong’s Beijing-backed leader Carrie Lam, calls for full democracy and an independent inquiry into what some say has been excessive police force against protesters.

Lam has so far refused to accede to any of the demands.

The protesters appeared to be getting more organized and willing to use violence to achieve their aims. On Sunday, activists said they hoped to stretch the police by splitting their marches.

“The police usually surround us and we have nowhere to go. So we adjust our strategy this time. This is much more fluid and flexible,” protester Edward Ng said.

As riot police advanced at the end of the night from several fronts, the protesters, hemmed in and unable to see a way out, began streaming down into the Sheung Wan underground metro station.

The black-clad protesters clambered onto and filled a passenger train, chanting “Free Hong Kong. Age of Revolution”, in an orderly retreat. Many changed out of their black shirts, then changed trains, and vanished into the night.