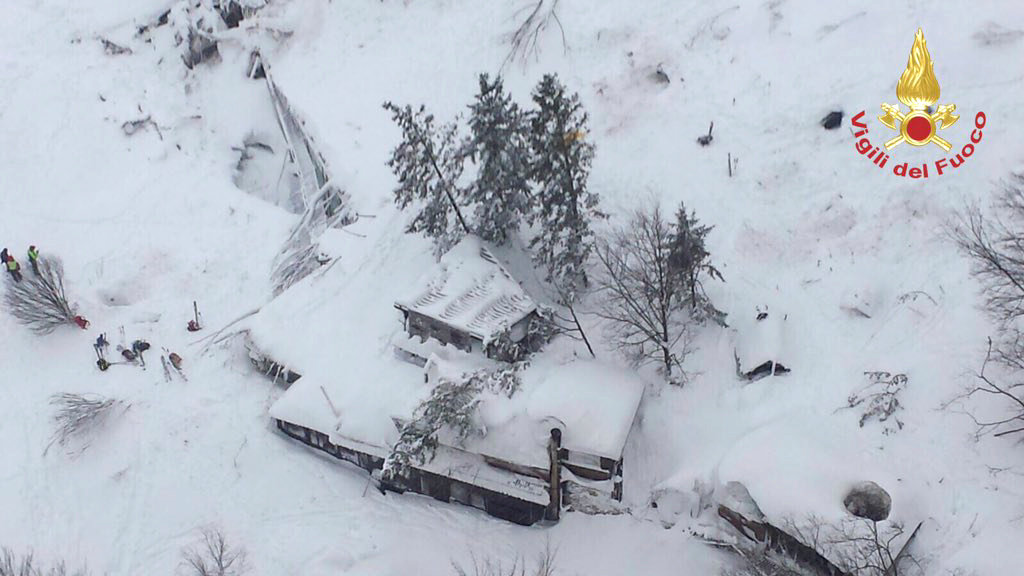 PENNE, Italy (Reuters) – A huge avalanche swallowed up a luxury mountain hotel in central Italy after a series of strong earthquakes rocked the area, burying up to 30 people under tonnes of snow and debris, officials said on Thursday.

Italian media said three bodies had been retrieved from the site. Rescue workers declined to comment on the reports, but said they had yet to find any sign of life.

The gabled peaks of parts of the roof and a row of windows were the only sections of the four-storey Hotel Rigopiano still visible after the wall of snow smashed into the four-star spa resort early on Wednesday evening.

Local authorities said about 30 people had been in the building at the time, including two children, but more than 20 hours later, only a couple of survivors had been found — two men who had been outside when the disaster struck.

“The hotel is almost completely destroyed. We’ve called out but we’ve heard no replies, no voices,” said Antonio Crocetta, a member of the Alpine Rescue squad who was on the scene. 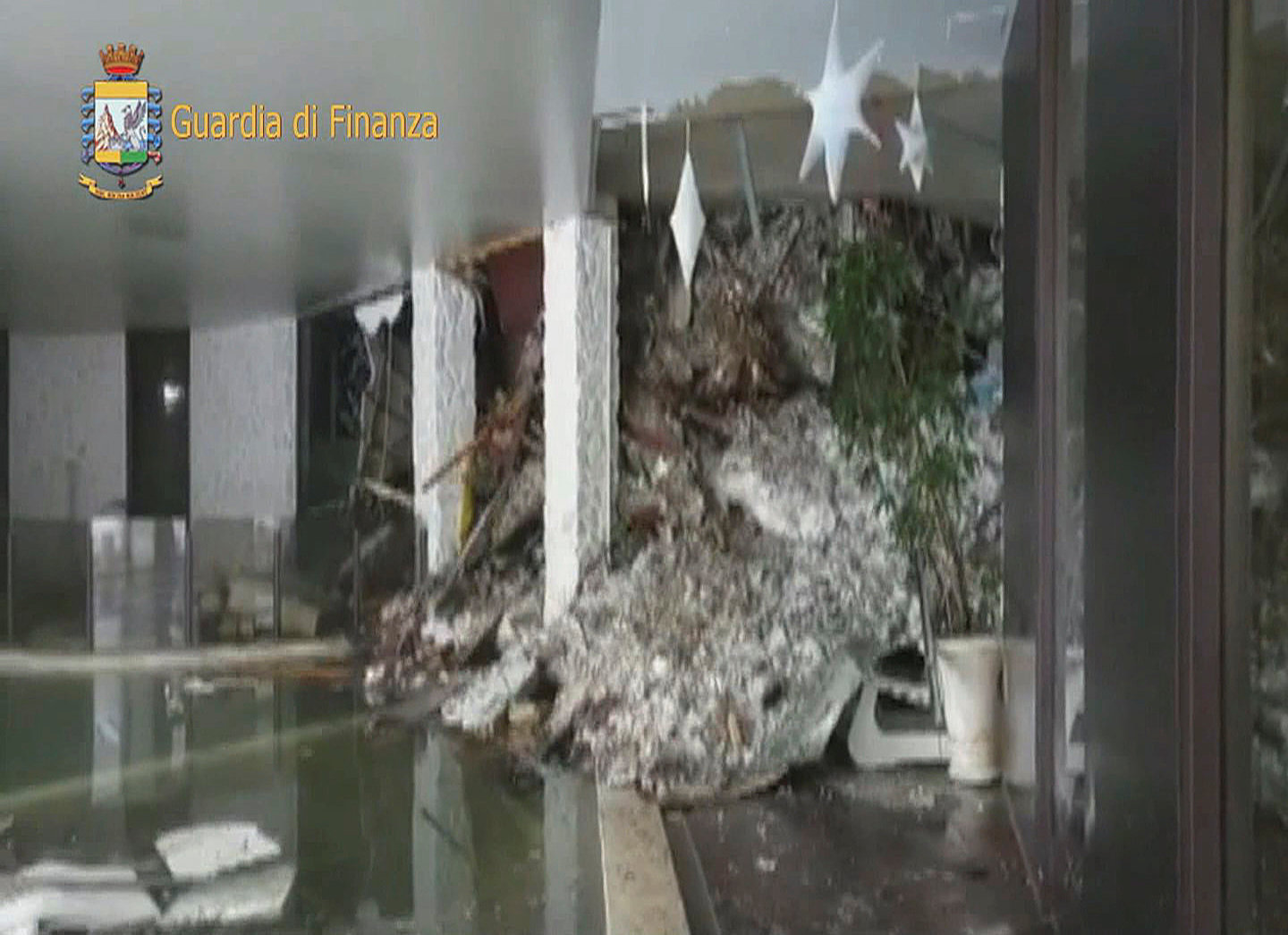 A photo taken from a video shows the snow inside the Hotel Rigopiano in Farindola, central Italy, hit by an avalanche, in this January 19, 2017 handout picture provided by Italy’s Finance Police. Guardia Di Finanza/Handout via REUTERS

“We’re digging and looking for people,” he told Reuters by phone from the isolated location in the Gran Sasso mountain range in the central Abruzzo region.

Rescue workers entered what appeared to be a lobby decorated with oil paintings and plants, where a landslide had torn through a wall, television footage showed.

Mattresses and furniture were spotted dozens of metres (yards) away, local media reported, and sniffer dogs were brought to the area to help locate possible survivors.

“I am alive because I went to get something from my car,” one of the two survivors, Giampiero Parete, told medical staff.

Italian media said he had been on holiday with his wife and two children, who were all still missing.

The rescue operation was hampered by metres of snow which has fallen on the Gran Sasso in recent days. Drifts made snow as deep as five metres (16 feet) in some places and snow ploughs struggled to cut a path up winding mountain roads.

The first rescuers only managed to arrive at 4.30 a.m. (0330 GMT) after having to ski through a blizzard to reach the site. After dawn broke, emergency services sent in helicopters. 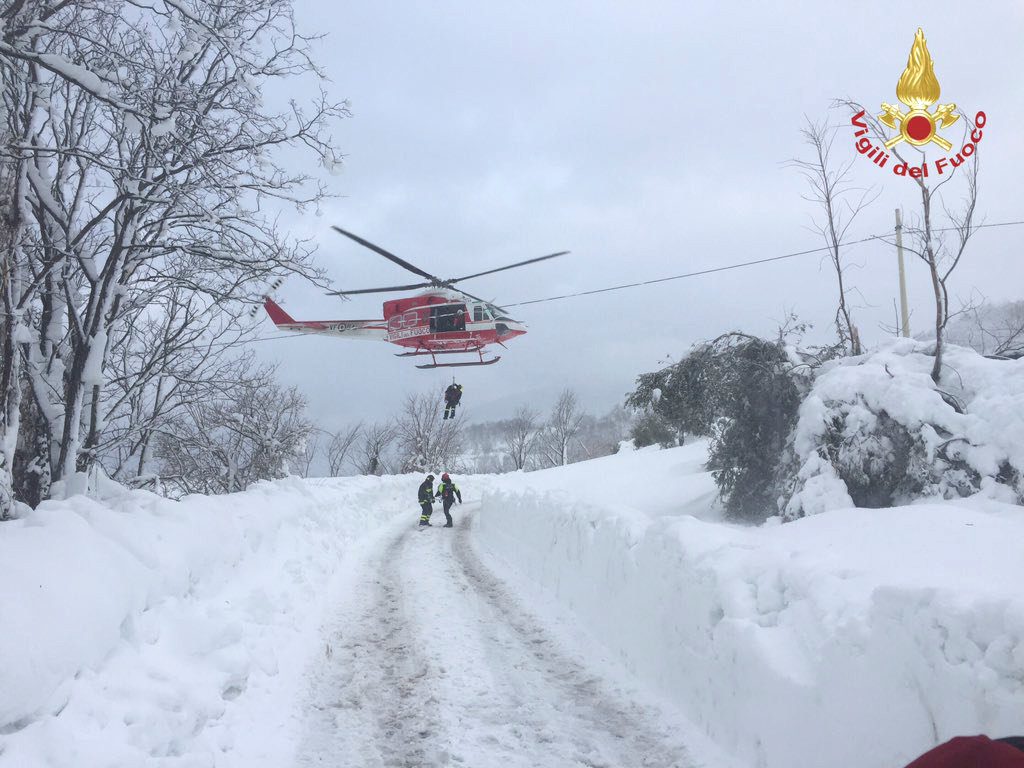 A base camp for rescue workers was set up in the town of Penne, some 10 km (6 miles) away, where ambulances waited.

The disaster struck just hours after four earthquakes with a magnitude of above 5.0 hit central Italy, sparking fears about possible avalanches.

Italian media said guests at the hotel had checked out and were waiting for a snow plough to arrive to open up the road and let them down the mountain. However, the avalanche struck before they had been able to leave.